Woodstock '99 photos prove that nothing went as expected. The festival seemed destined to be a success with a line-up of luxury, including Metallica, The Offspring, Limp Bizkit, Red Hot Chilli Peppers, and Rage Against the Machine.

Ticket sales could not have gone better. More than 220,000 people gathered to enjoy the event. However, things quickly began to go wrong. Woodstock was an open-air music festival from August 15th to 17th, 1969, in White Lake, New York State. It is considered both the high point and the endpoint of the mainstream hippie movement in the USA.

The number of visitors was more than twice as high as expected. It resulted in massive traffic jams and catastrophic conditions prevailing during the event. The bad weather and many organizational problems followed. More than a million people set off, but the vast majority got stuck in the traffic chaos along the way.

Despite all these dire circumstances, Woodstock is remembered for its peaceful atmosphere, not least because many musicians, visitors, and staff spent their days under the influence of drugs such as LSD, mescaline, hashish, and marijuana.

Woodstock is considered the mother of all open-air festivals.

The Woodstock Tradition Goes On 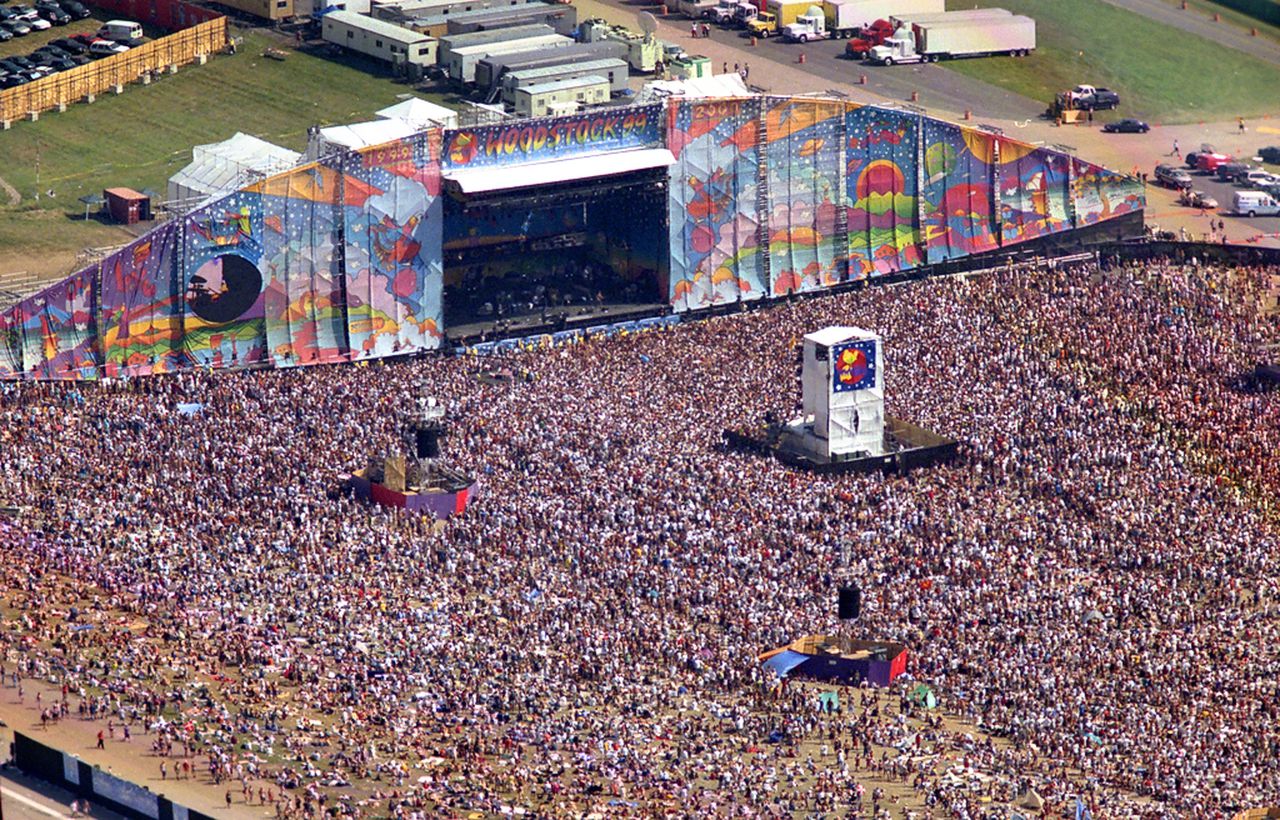 Again, around 350,000 visitors came, and some of the artists had already played at Woodstock in 1969, including Joe Cocker, Crosby, Stills and Nash, Grateful Dead, and Santana.

Woodstock '99 Photos Show How It Became The Worst Festival Ever 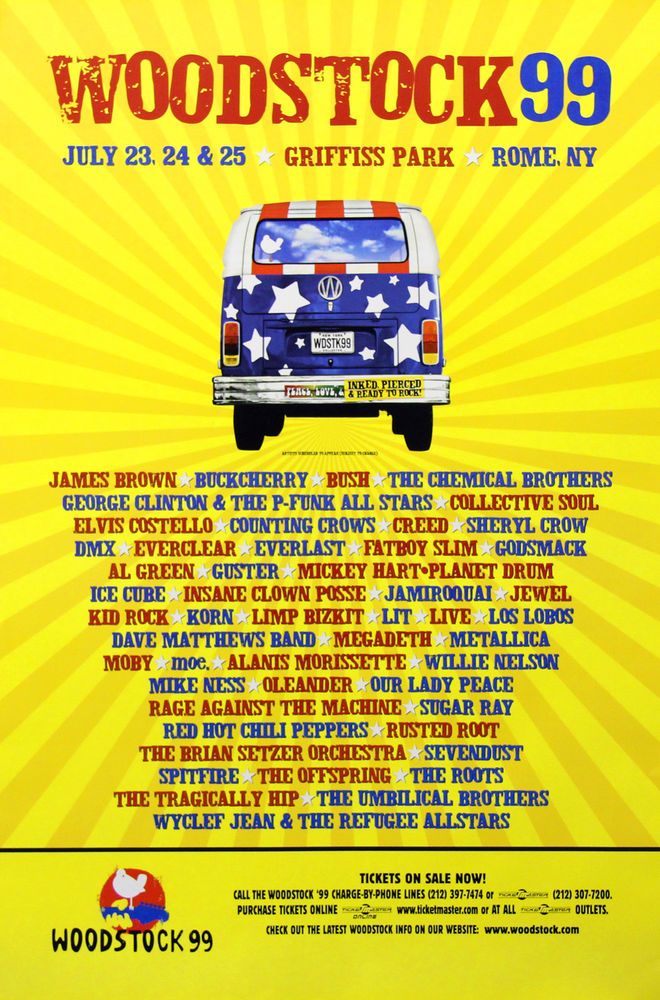 The 30th Anniversary Woodstock III Peace, Love, and Music Festival was held July 23-25, 1999, in Rome, New York. This time over 250,000 visitors came, and the festival went down in history again, but not for peace, love, and music.

Due to the extreme heat, inflated ticket prices, and overpriced food and drinks, the mood was heated from the start. The sanitary facilities were a disaster, and nobody expected the mud following the rain.

There were 44 detainees by the police and 1,200 attendees who had to be treated by medical services. In addition, during Metallica's performance, one of the attendees collapsed, and after being taken to the hospital, he died due to a heat stroke that caused fatal hyperthermia.

This edition of Woodstock would go on to be the most infamous in all of festival history. 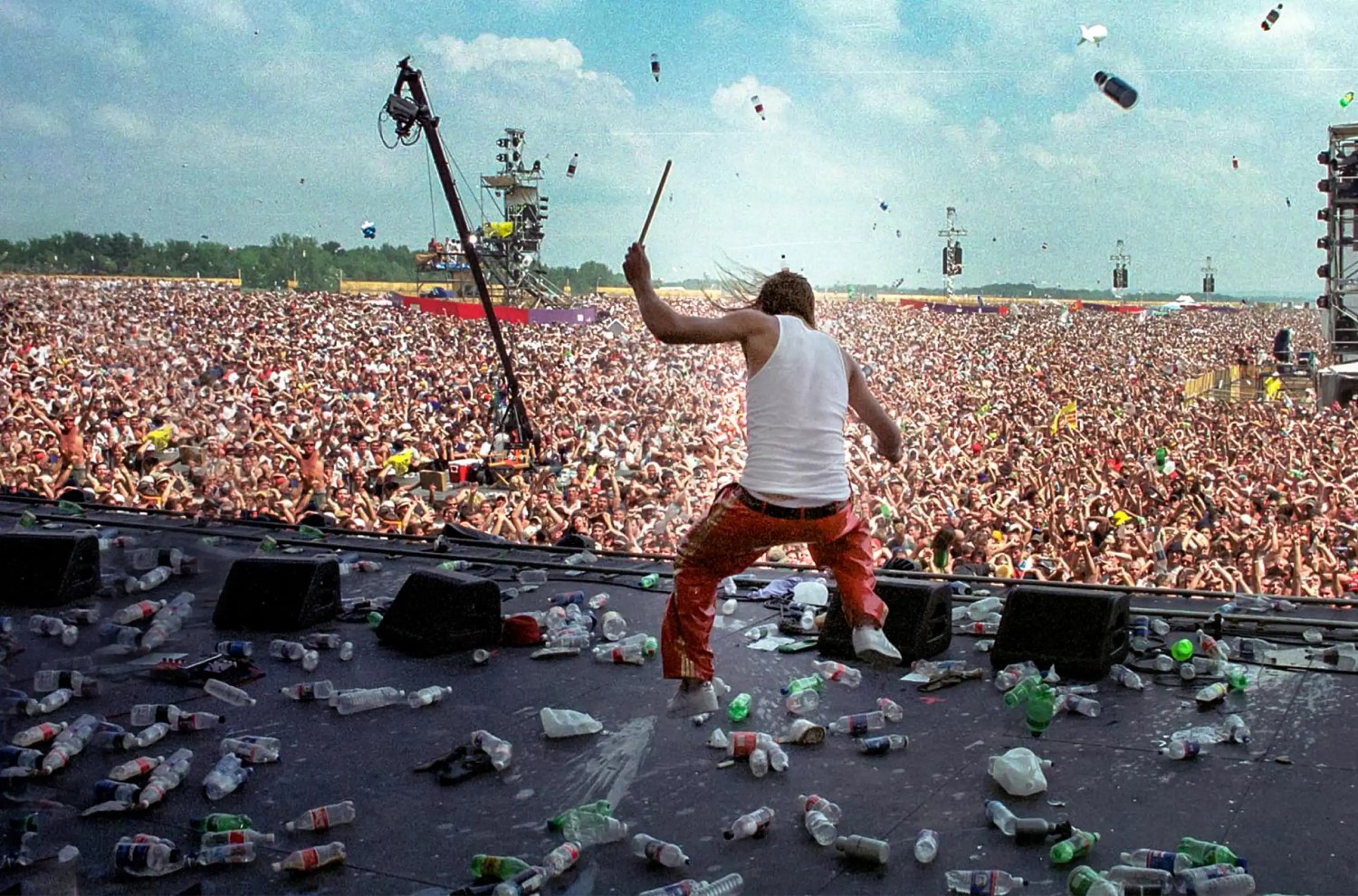 The Offspring heated the atmosphere in the audience with their stage show. Backstreet Boys dummies were destroyed, so several visitors got seriously injured in the mosh pit, and several women were sexually harassed. Although The Offspring frontman Dexter Holland called on the fans from the stage to calm down, the disaster and chaos took their course.

On Saturday evening, at the Limp Bizkit concert, the heated mood reached its high point when Limp Bizkit's frontman Fred Durst called people to riot along with the song Break Stuff. It happened as it had to: the mob escalated, there was severe rioting, and several men raped a woman right in front of the band and in front of the stage. 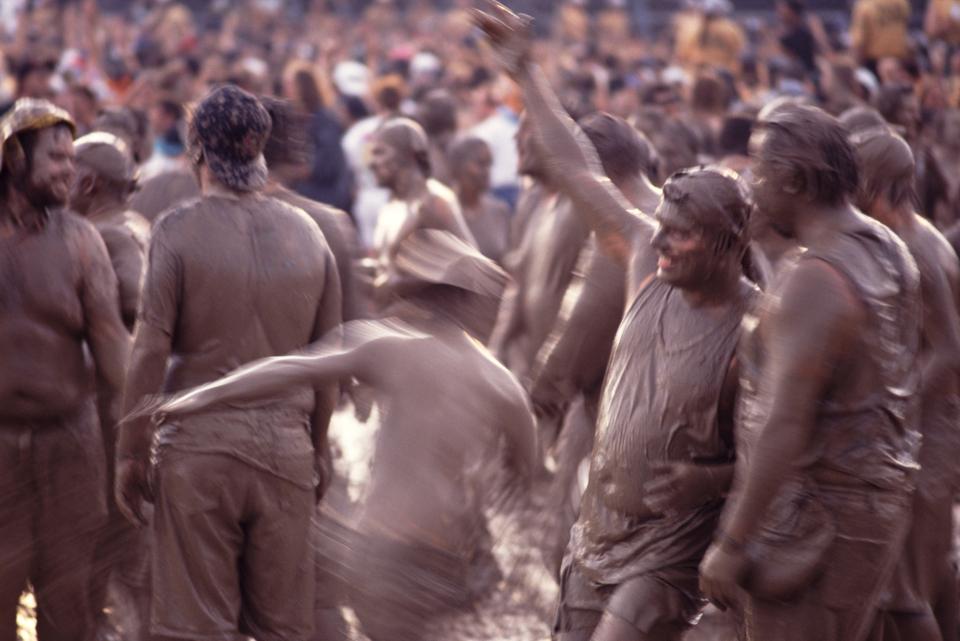 Limp Bizkit later said they hadn't heard of it.

More rapes, aggressive confrontations, and destruction continued on the festival grounds. Sanitary facilities were destroyed, barriers were torn out, and misused for crowd surfing. Even during Eminem's and Korn's performances, there were gruesome scenes. The mob was out of control, and nothing could stop it.

Also, on Sunday, the last day, there were riots, and during the performance of the Red Hot Chili Peppers, the last frustration was vented. The second festival stage was utterly destroyed and caught fire. Fires also ignited in the crowd in front of the stage. 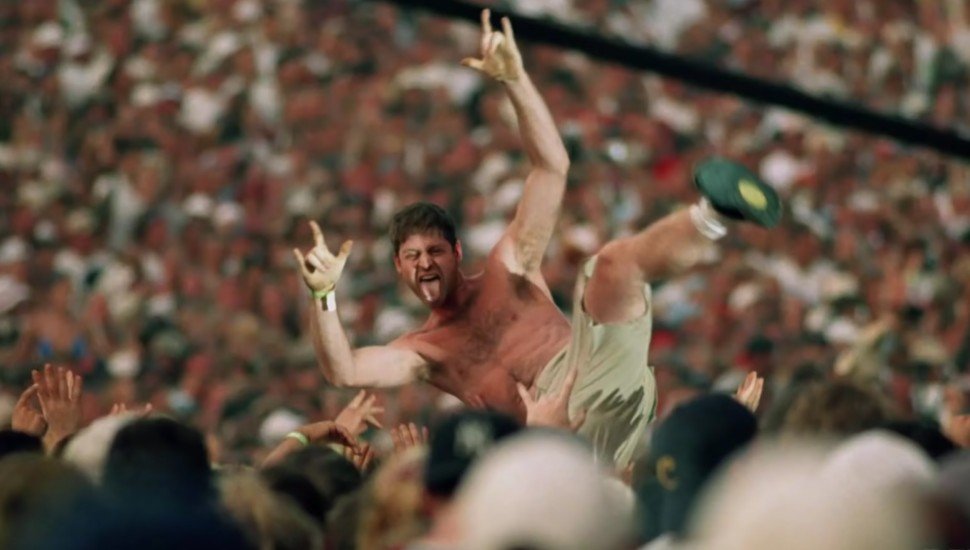 MTV had broadcast the festival with all its failings all weekend and made it visible to the shocked world. Yet, even the MTV crew had to be evacuated by helicopter during the RHCP performance. The completely senseless violence went beyond the festival area, as sales stands and cars were destroyed in the neighboring town.

HBO made a multi-part documentary series from the disaster festival weekend named Woodstock 99: Peace, Love, and Rage. It was released in 2021.

The documentary sheds light on many of the moments of violence again. In addition, many previously unseen archive recordings and behind-the-scenes recordings are shown.

Below are 15 Woodstock '99 photos that show that the festival was an absolute horror show. 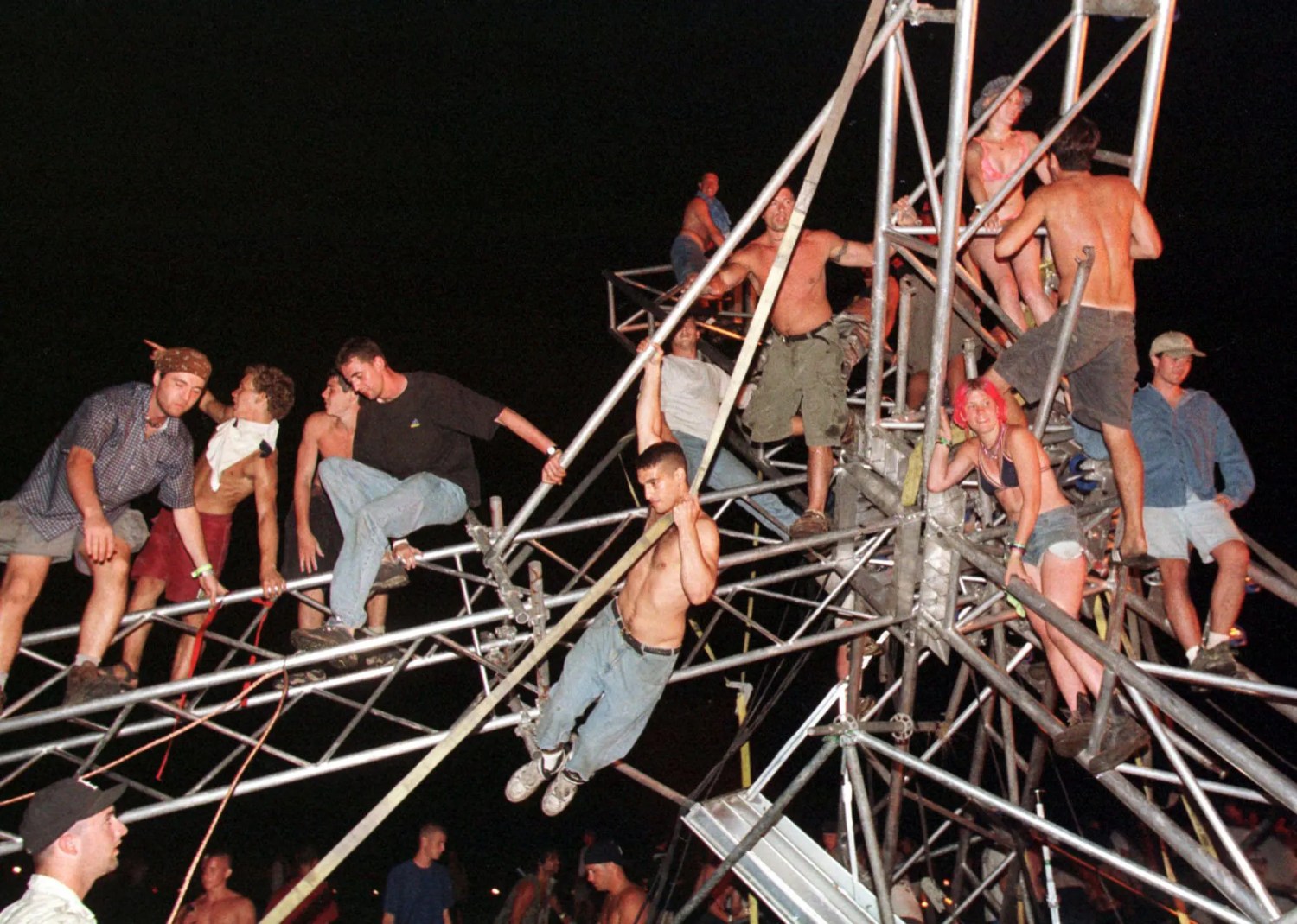 What an irony that the Woodstock '99 festival was held on a military base.

Organizers took it as a premise that in a "defensible" space people couldn't gain access by jumping or breaking fences. It seemed like a reasonable approach but one that would quickly prove wrong.

It was the face of the suppressed rage of hundreds of thousands of people who had no specific reason to feel such wrath.

As seen in Woodstock '99 photos, people were climbing not just on fences but also on towers. 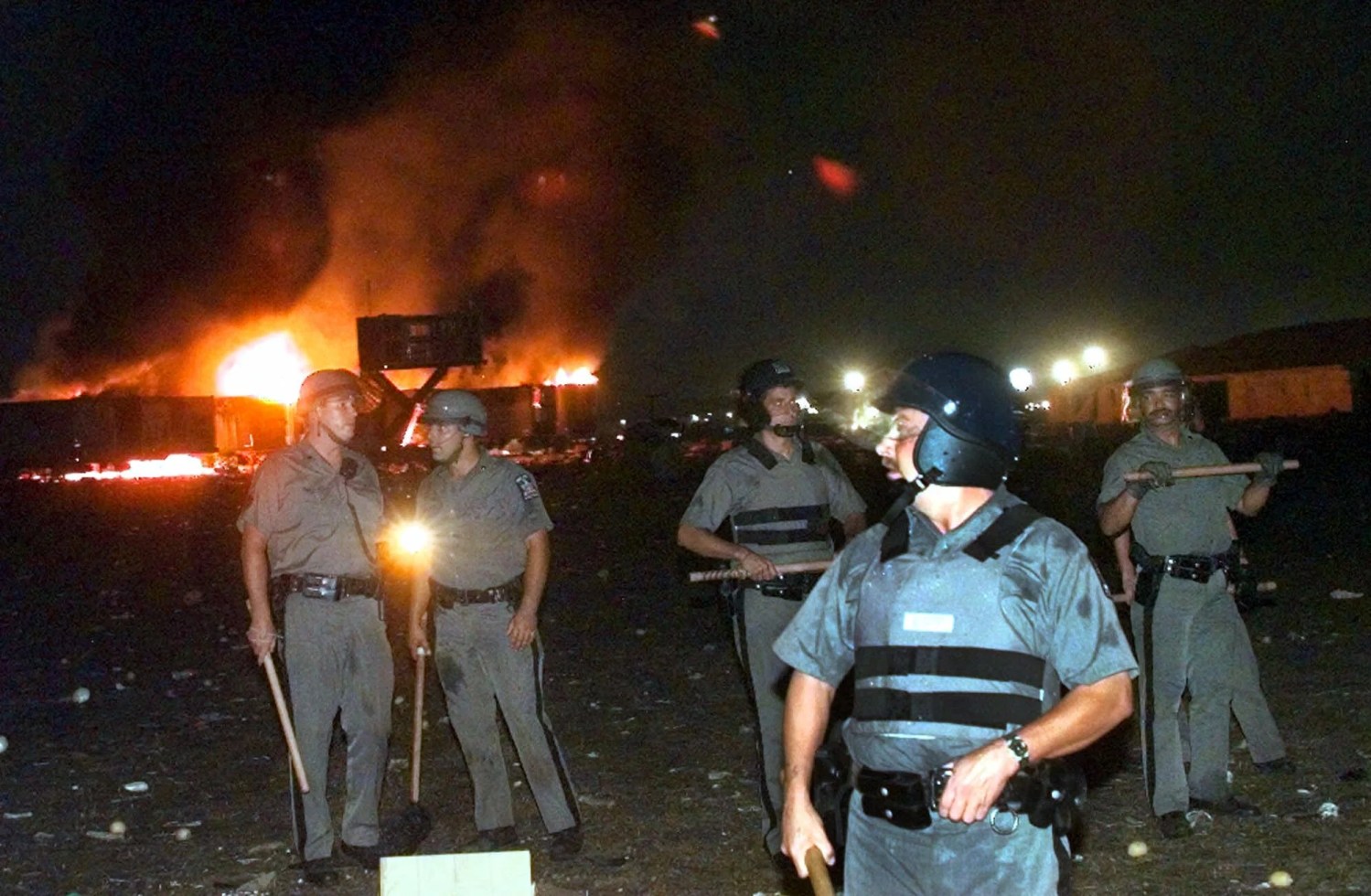 When the thing was out of control and the looting was continuous, the fire illuminated everything. The security forces entered the premises peacefully and without causing violence to the public. 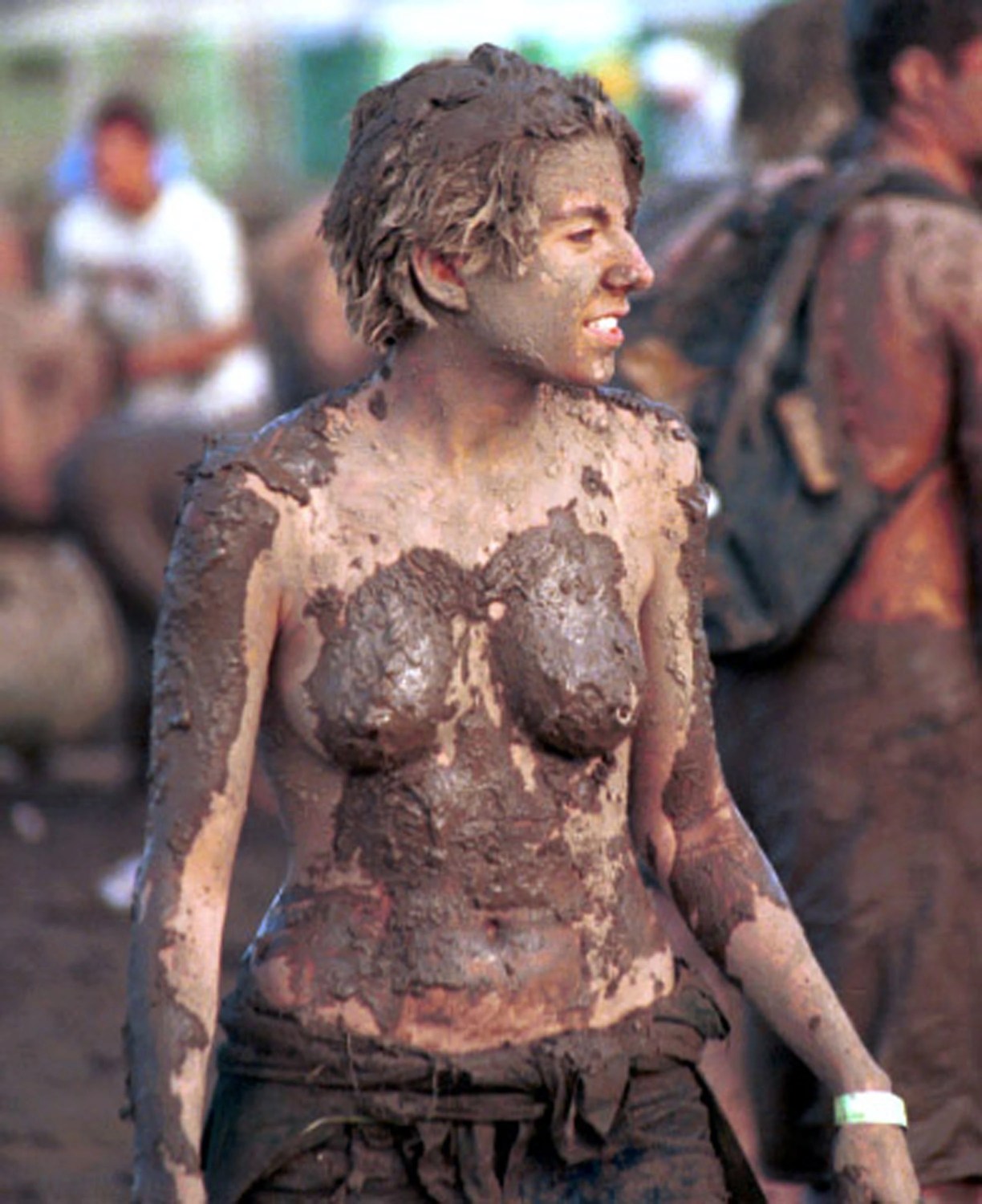 The sexually aggressive behavior of the male attendees contrasts with the apparent freedom and calm with which the female attendees walked through the festival. Many showed their breasts without any problem, as in 1969.

But as the mood turned sour throughout the festival, women became the targets of unprecedented sexual violence. Although there were only ten complaints of sexual harassment in the police records when viewing Woodstock '99 photos, one can observe another picture.

Women crowd-surfed while a mass of men touched their breasts and buttocks and did whatever they wanted. 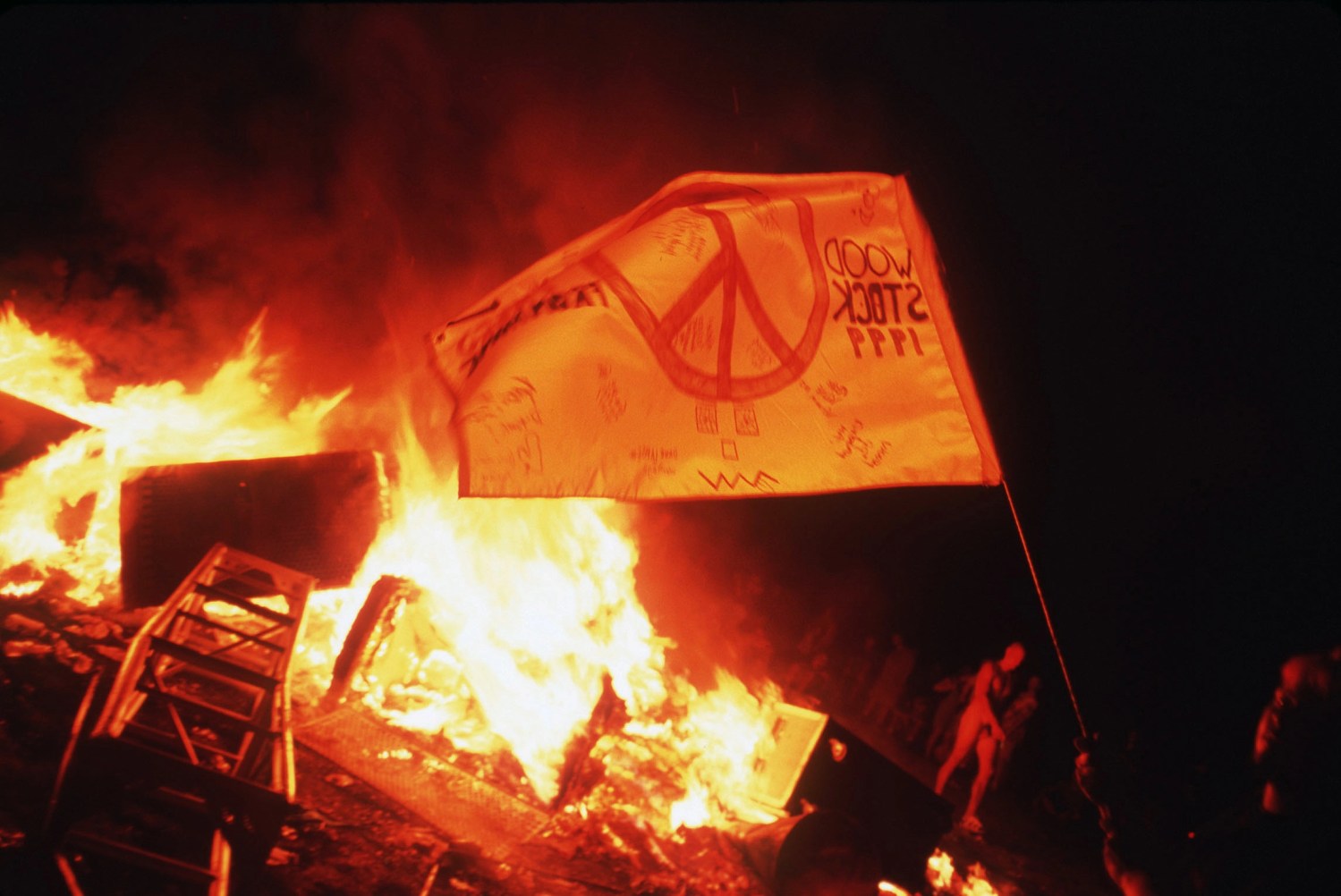 The phrase "Peace, love, and music" disappeared just like the wishes of many to be able to enjoy their favorite bands.

Riots, vandalism, rape, and a lot of brutalities were experienced in what is described as "the day the 90s died." 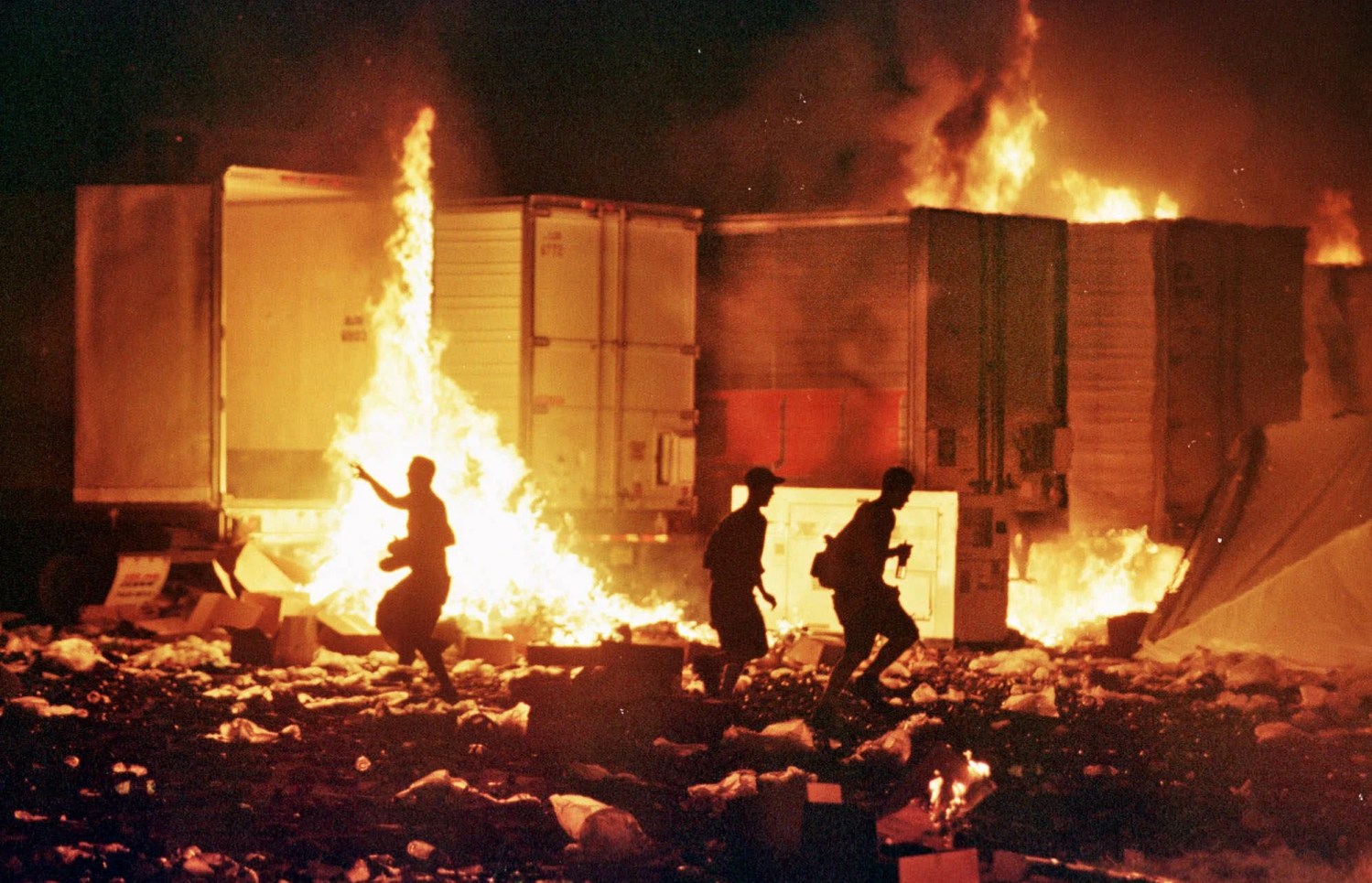 It seemed like a halo of "spring break" for twenty-somethings unleashed. The heat and the high prices were the perfect cocktail to generate situations of unprecedented danger. It reached its zenith on the night of the fourth and last day of the festival.

The crowd set fire to the venue and ransacked it entirely. Woodstock '99 photos, as well as festival footages, show constant fires amid the crowd.

Woodstock '99 Photos Show The Chaos: Boys Gather Around A Fire And Jump On It Amidst The Carnage 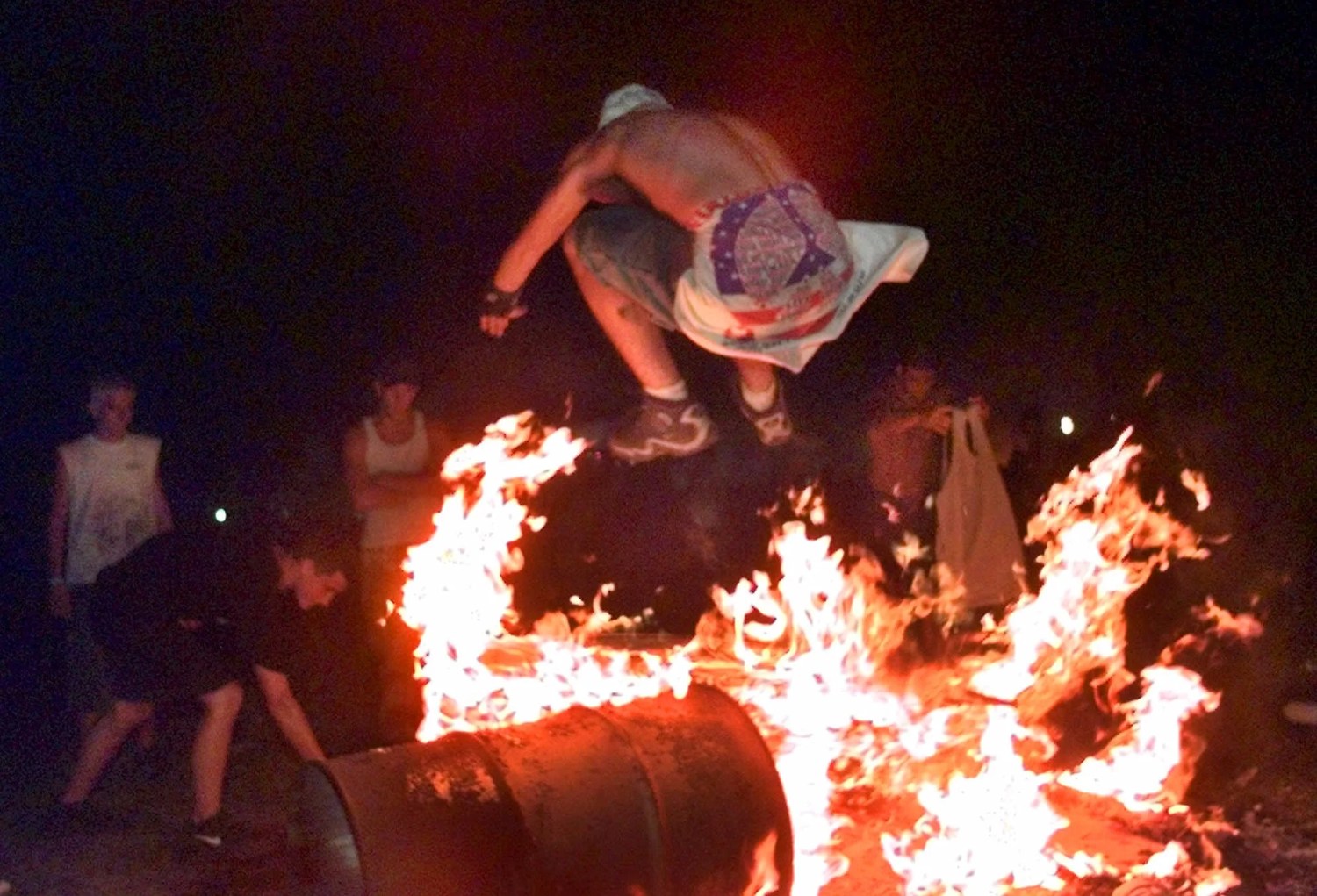 The organizers of Woodstock were not promoting peace and love. Instead, they were putting on an exaggerated commercial festival.

Woodstock '99 had a multitude of corporate sponsors (Budweiser, Mercedes, etc.) seeking to reach precisely the type of public that the festival aimed to attract with its poster.

Young people felt like they were the object of a commercial game when they went to an enclosure where they had no water, the conditions were poor, and the hot dogs were 12 dollars. That anger accumulated, and one of their "games for fun" jumped over fire, as seen from Woodstock '99 photos. 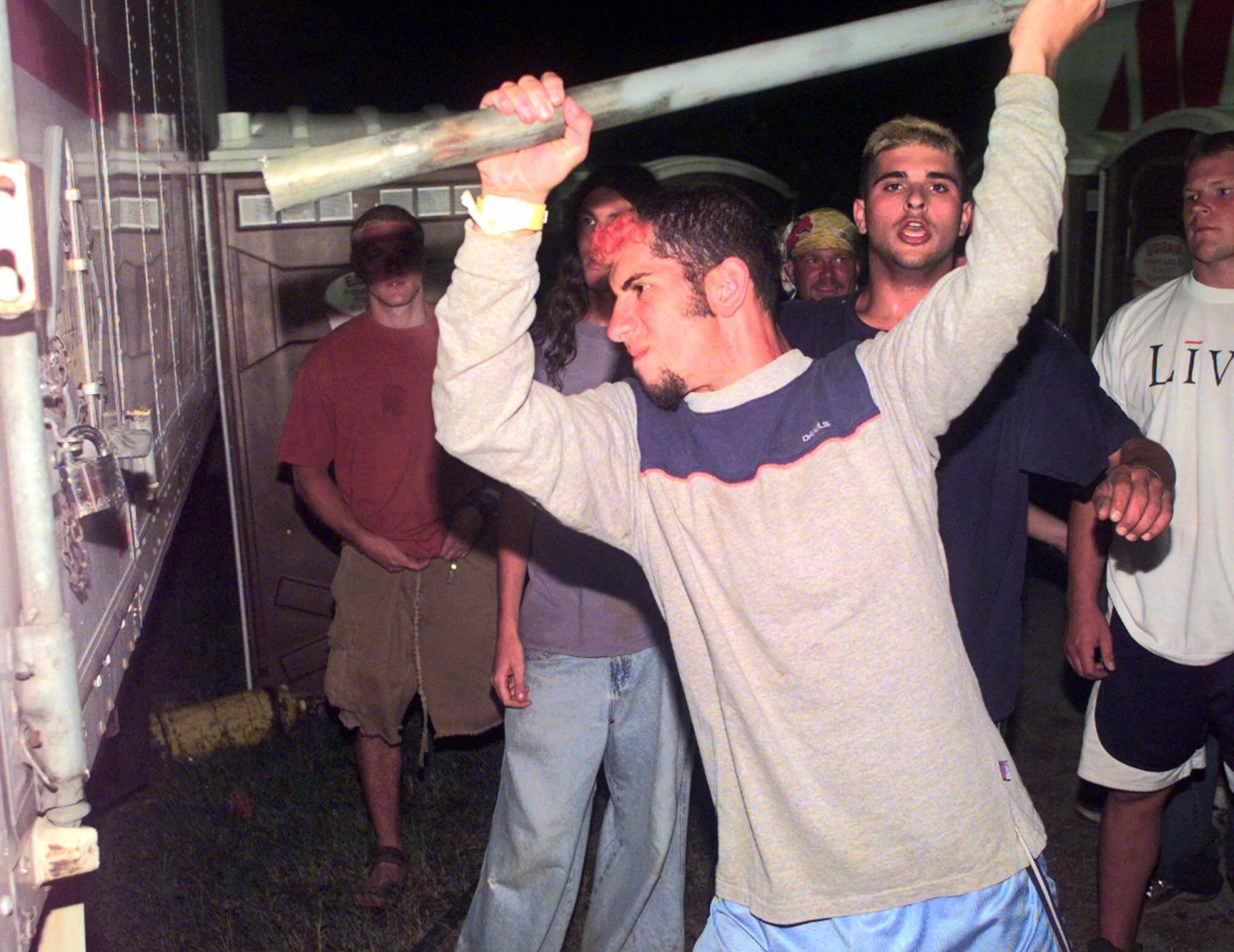 The main stage was methodically destroyed by shirtless youths who climbed on its structure, the stalls, and the vehicles with the merchandise. These were the main target of the attacks.

Many Woodstock '99 photos testify on vandalism and burglaries. People were stealing shirts, drinks, and food. Vending machines were destroyed in search of money…

All this happened while the police struggled to put an order, and the rest ran and screamed in fear. 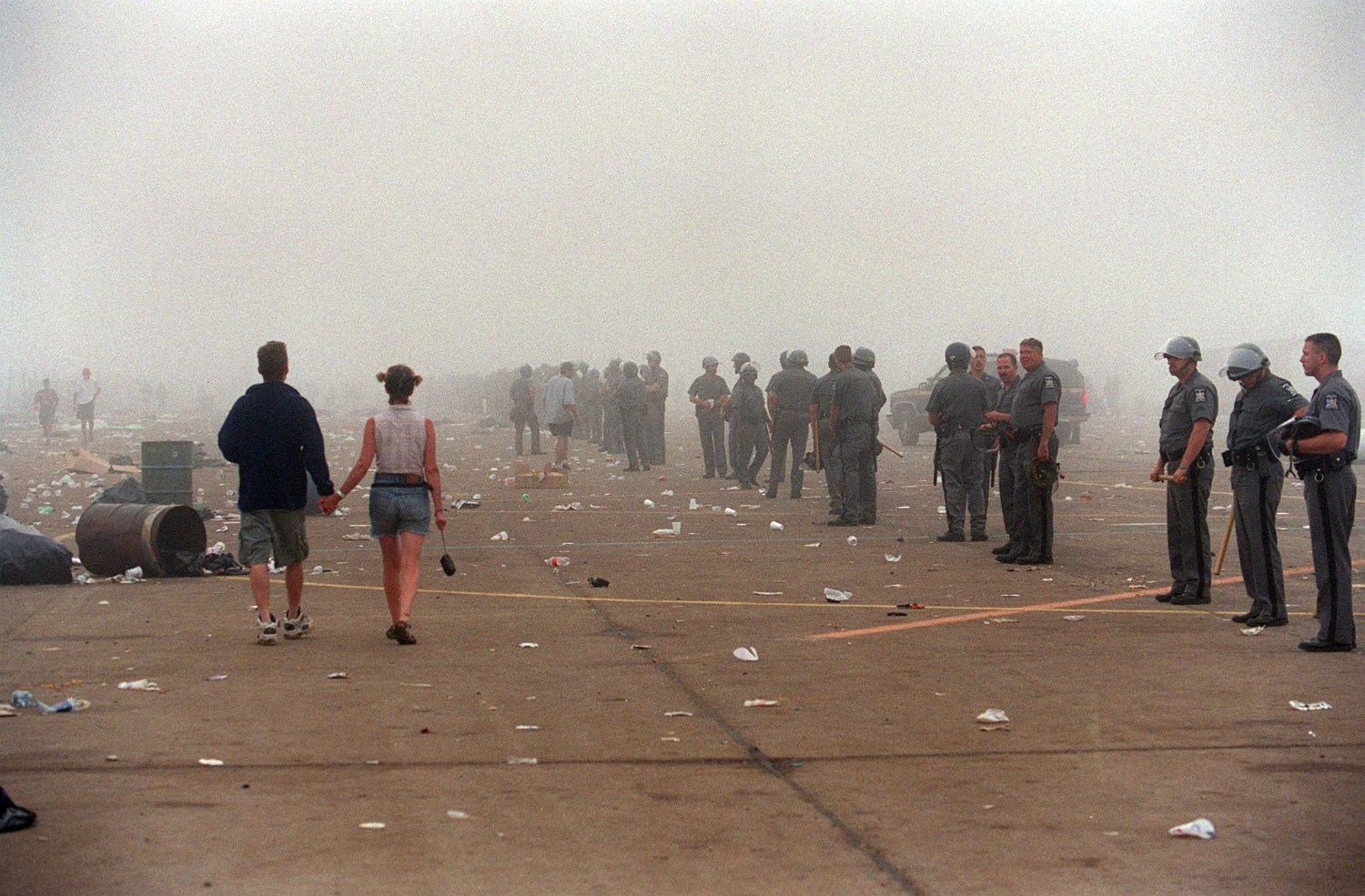 Close to 400,000 people attended, many with false tickets, so the logistics and security personnel were insufficient.

Many staff members were paid very little or not at all. Many walked off the job in the middle of the event. Woodstock '99 photos show that the Police could not put an end to the madness. 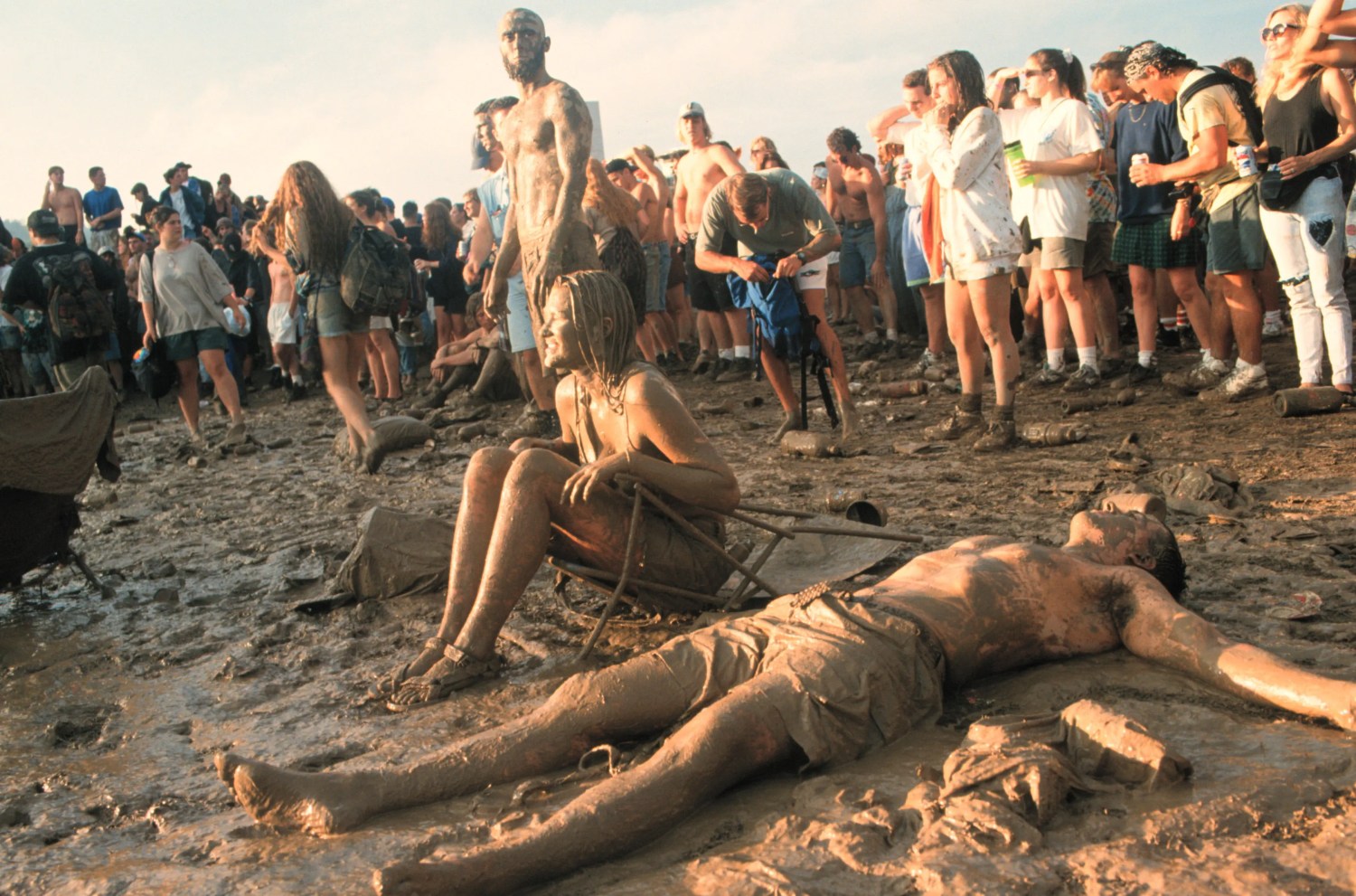 The cleanliness of the venue was one of the most criticized factors of the event.

The truth is that frustration over the price of water and the scarcity of sources caused some brainless people to break pipes and generate an enormous amount of mud in the enclosure. 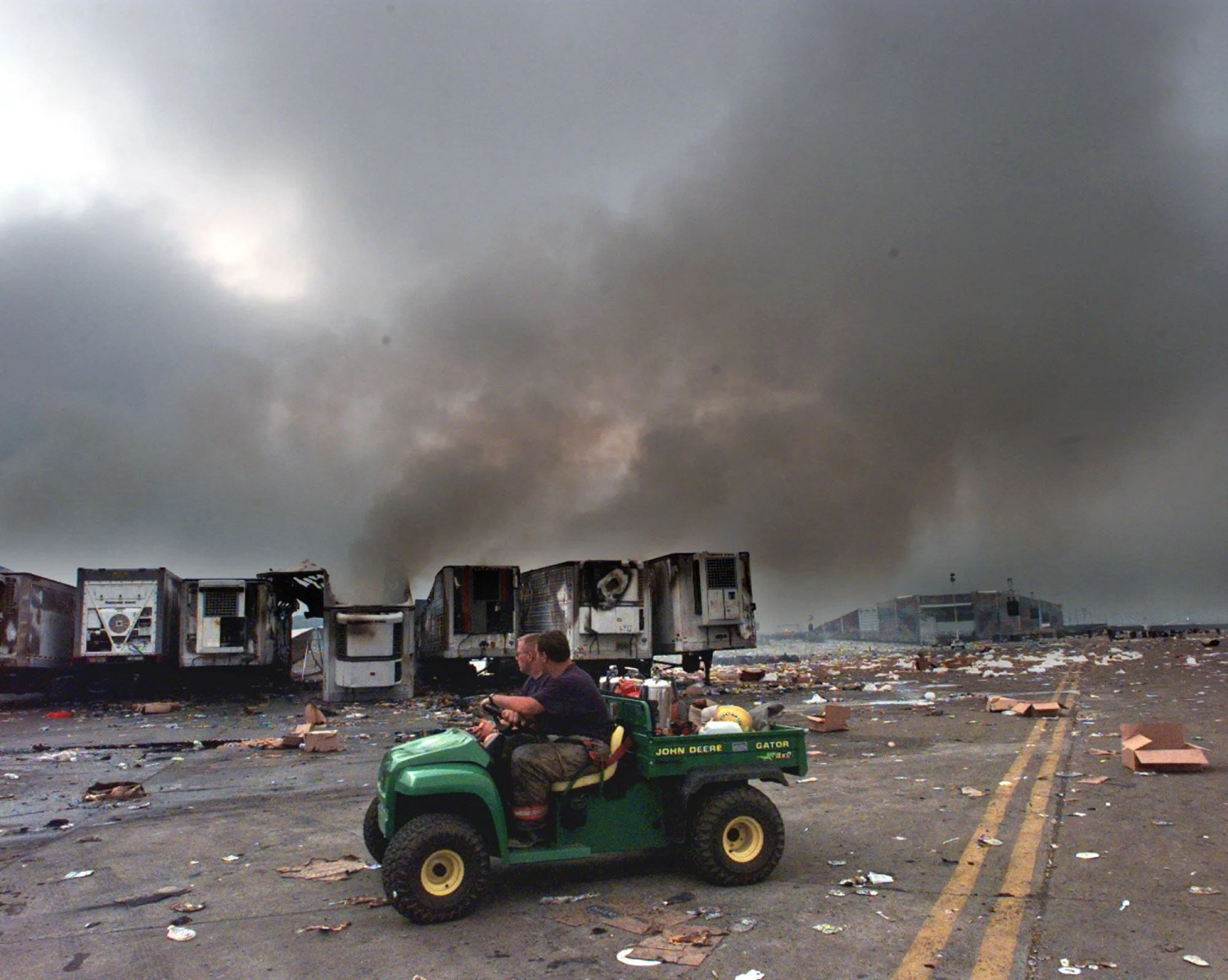 Squads of the New York firefighters appeared. Little by little, yelling and threatening, they created a circle that kept the crowd out of harm's way from the burning trucks.

Several explosions in the trailers were answered with roars of joy by the thousands who watched along with the police. 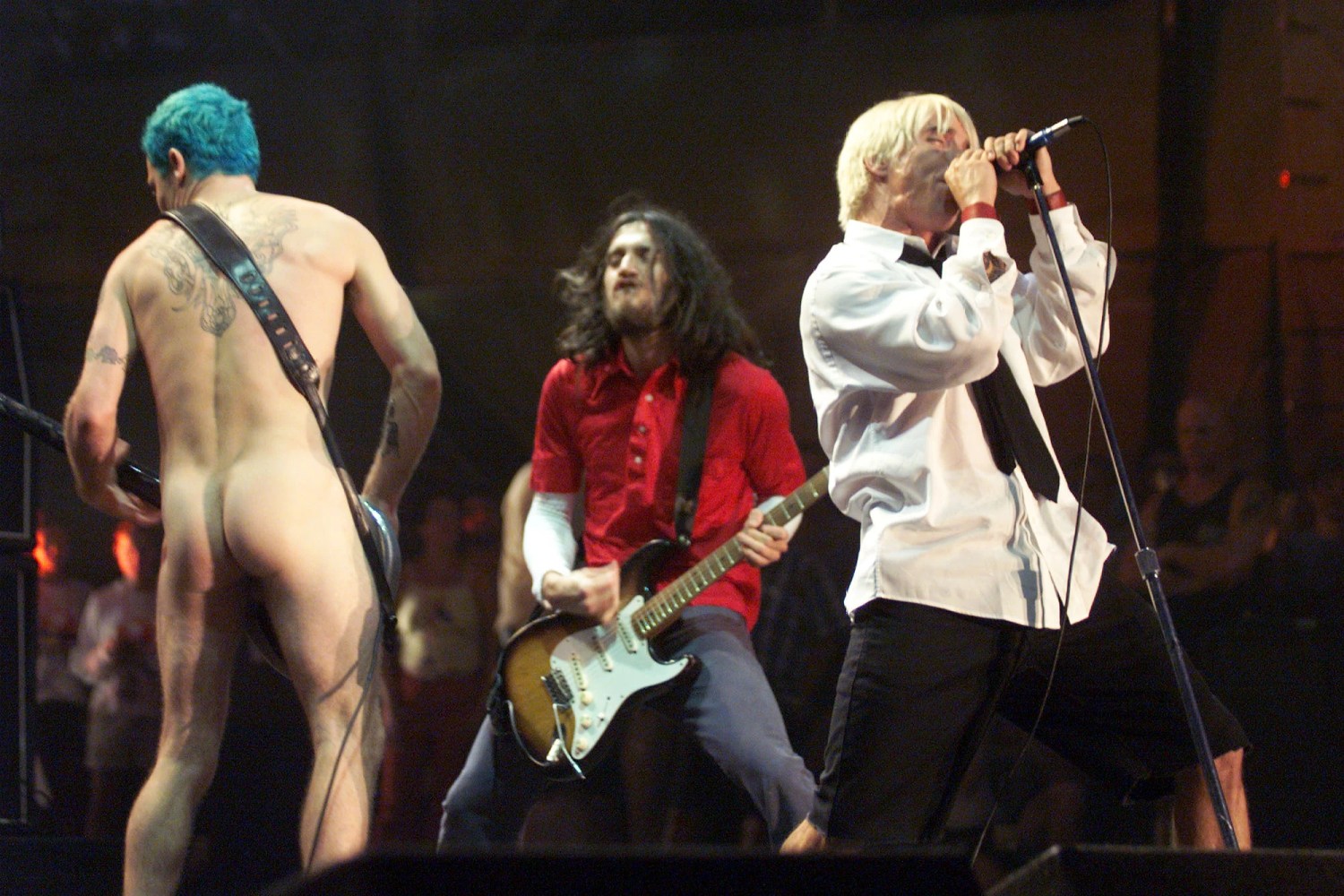 An organization had distributed candles to create a "vigil" atmosphere during the performance of Under The Bridge by the RHCP.

It turns out that the public was so mad at all the adverse conditions that they lit candles to create small fires. They even used the (expensive) water bottles thrown around as fuel to fuel the fire even more.

Coincidently, the band rocked Fire, a cover of Jimi Hendrix. Things got ultimately out of control, resulting in 12 trailers, a small bus, and several bathrooms being destroyed by fire.

Music Lovers Find Themselves In A Morass Of Mud, Garbage, And Sewage As They Try To Enjoy The Bands 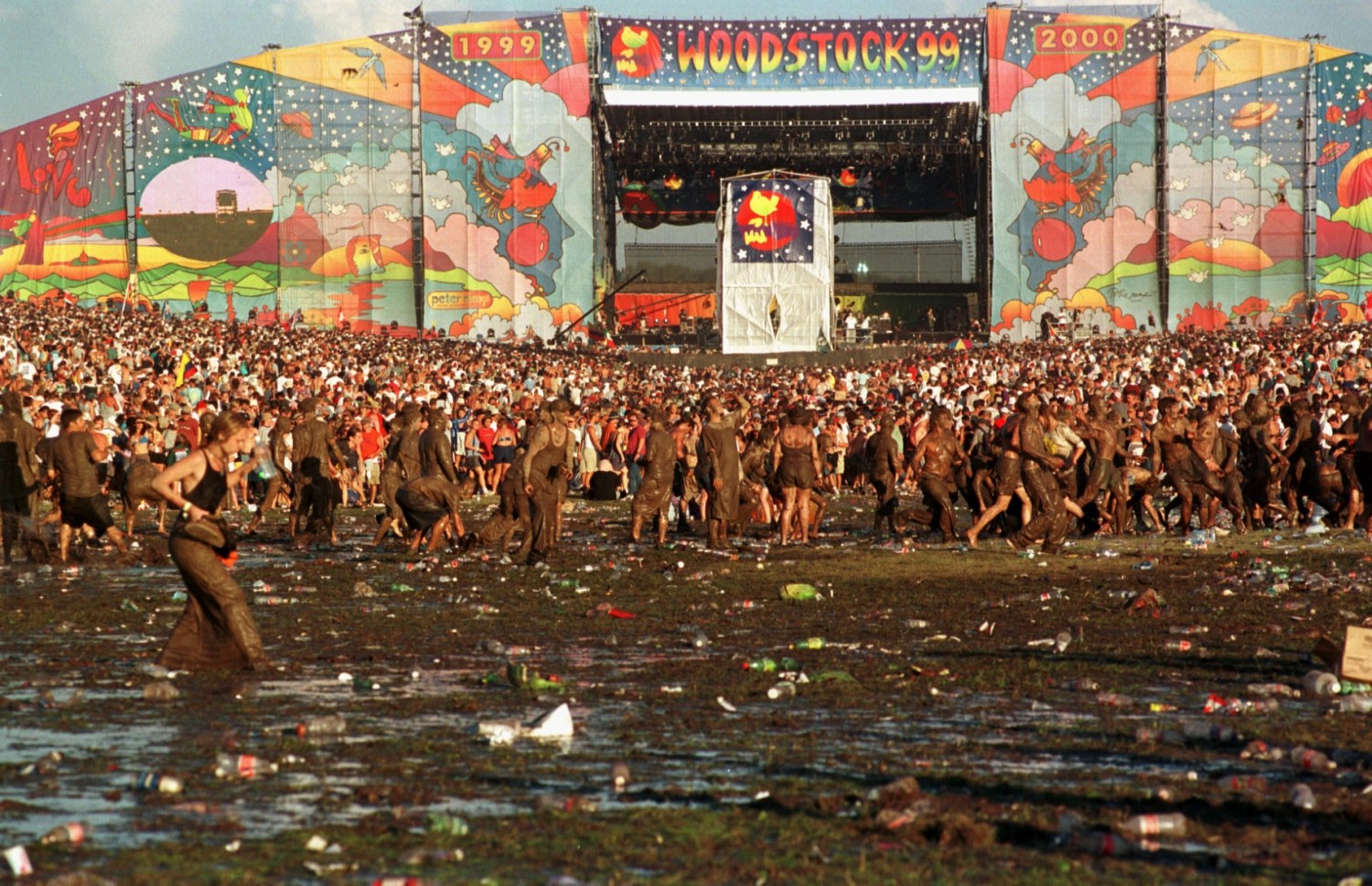 The crowd rolled in the mud, unaware that it was the contents of nearby chemical toilets.

Revelers Lay In A Pile Of Crushed Bottles 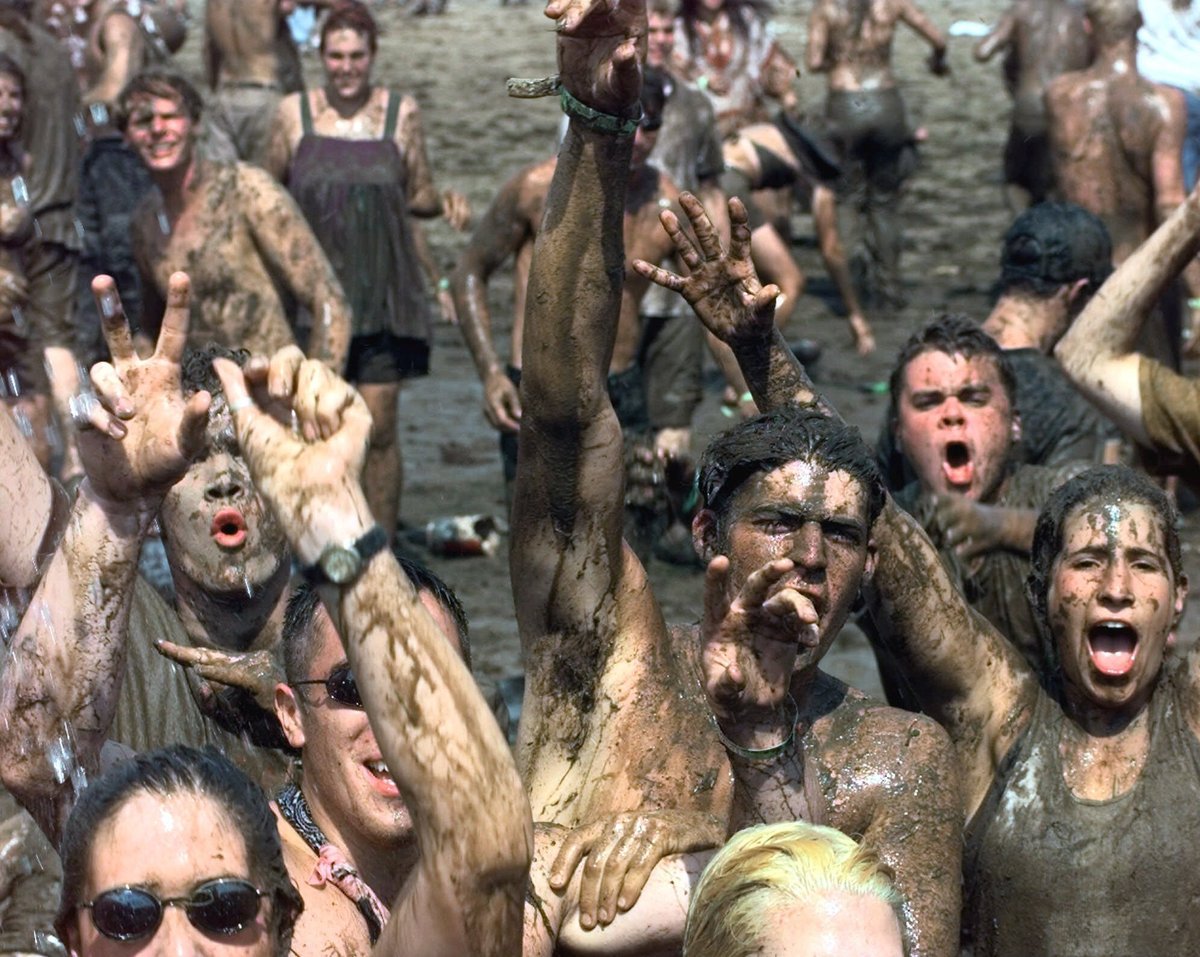 While playing a cover of Jimi Hendrix's Fire, hundreds of plastic bottles were used to fuel the flames, causing an audio tower to catch fire. 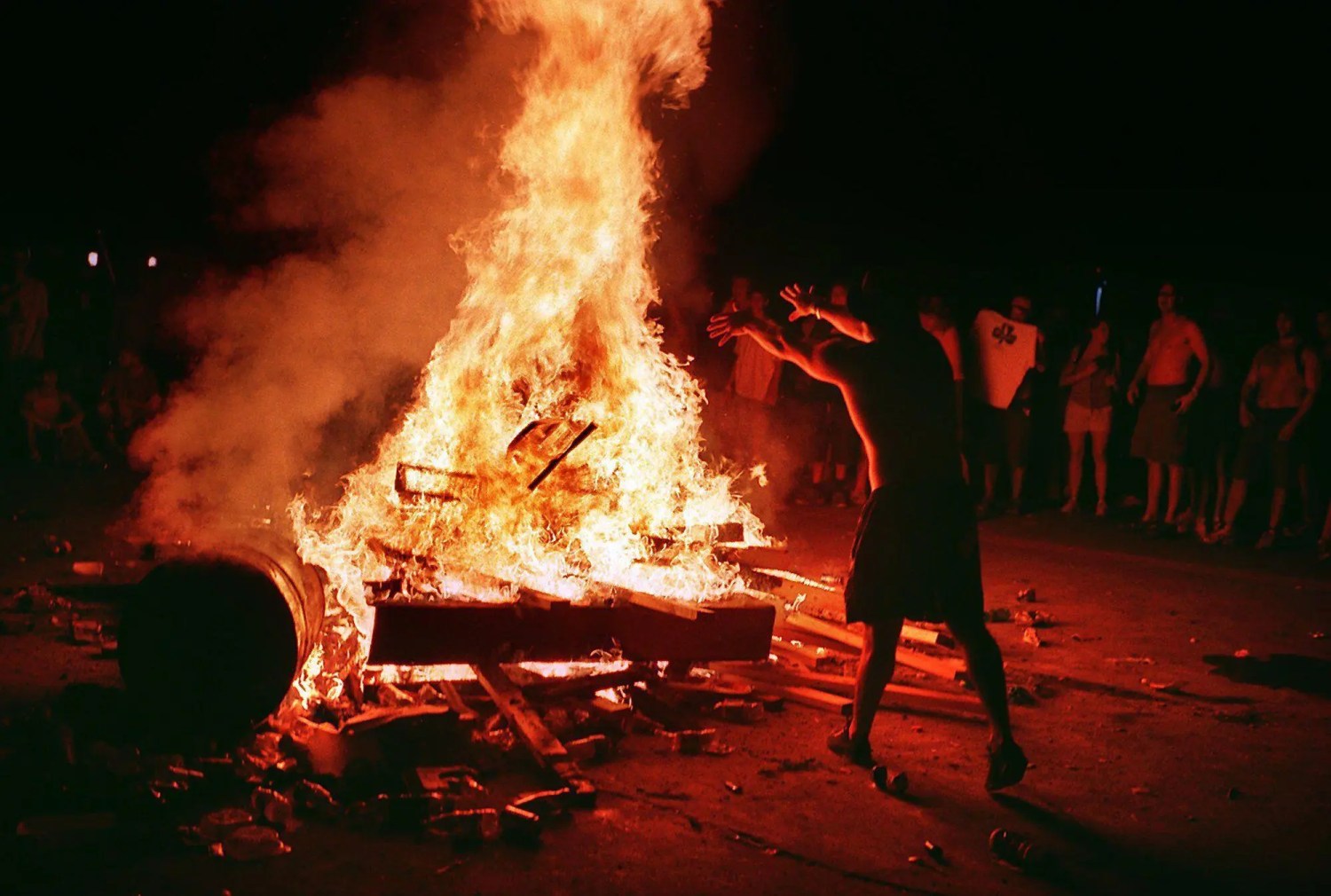 No wonder the 1999 Woodstock was the last edition of the legendary festival.

Woodstock '99 photos speak of an event that began to celebrate peace but ended in looting and vandalism.