Sleeping next to a snoring partner is the worst. In fact, it should not even be called sleeping. You're spinning around, waiting for the sun to come up, just so you don't have to listen to that annoying, soul-crushing sound.

While men do snore more, women can be loud and proud, as well. Of course, the Twitter community had a lot to say about spouses who snore, and they had every right to be upset.

Before we get onto the life-saving part, we have to hear from the poor souls who're 'sleeping' next to snoring dudes. And ladies, yes, we went through that part.

If only we could keep them up all the time...

Pretty much every person who lives with a snorer can relate. No matter how much we love them, when they're making those damn sounds, it's like they're doing it on purpose. And we're not taking responsibility for our actions.

Snoring is basically bragging about being asleep, so loudly, that it stops other people from sleeping.
It’s like lying there screaming “I’M HAVING A LOVELY SLEEP”

He's right there next to you; all tucked in. You, on the other hand, are tossing and turning, shoving him, and nothing.

People who snore are the worst. The level of selfishness is beyond our understanding.

Snore again and I’ll smother you.

For better or worse, sickness, health, we get all that. But, you know what? No one ever mentioned snoring. Otherwise, people would just drop the whole marriage thing.

My wife got a Fitbit for the sole purpose of proving how many times I wake her up in the middle of the night by snoring.

Poor woman! He didn't even believe her that he's a major snorer. Now she has all the proof she needed, though it won't change a thing.

Well, at least the hubby's bragging about it on Twitter, so he's just having the time of his life. All that, plus a good night's sleep... Lucky!

The saddest side of marriage

If you thought 'it's no big deal,' think again. Snoring is like a constant reminder that the person you love is the most annoying sleeper ever.

You're spending nights literally begging your partner to stop with the noise! Awful, and so wrong.

I recorded my husband snoring and then played it back to hear it and he rolled over and said, “TURN THAT DOWN I’M TRYING TO SLEEP!”

And there you have it: you give them a taste of their own medicine, and you're the bad guy. Or a wife, in this case.

When my husband snores, I find it incredibly annoying.
When my dog snores, I think it is just adorable.
I don't believe I am alone in this.

This woman's onto something. If partners acted as dogs, their snoring would be less annoying. Or not, because you don't have to share your bed with your dog. When you're married, you kind of have to...

It's like you fall asleep, and that distinctive and earth-shattering sound awakens you. Then you go through stages, making something as simple as snoring into freaking psychics. It's a whole process, and you're trying to be optimistic. At first.

Then, you lose your cool because who cares? You can't sleep, and what gives your snoring partner the right to rub salt to your wounded sleep?

Those who snore also lie

H: I'm not even sleeping!

Instead of sexy pillow fights, you're left with pinching, pushing, and throwing your elbows in the air.

Depressing. On the upside, you only have a few hours left until you have to go to work, cook, deal with the kids, you know, the usual.

Not quite a fairy tale romance

my future husband probably snores, I hate him already

Do you know why fairy tales end so abruptly? Because the two get married, he starts snoring, and she's miserable.

It's like living with a case of Mondays each day for the rest of your life. Romance? You're so tired you can't even spell the word.

You can almost feel the pain these Twitter users go through every night. It's exhausting to even think about their sleepless nights, but hey, the good news is on their way.

When you're pinning all your hopes for a good night's sleep on the life of the battery in your noise cancelling headphones #snoring #Bose pic.twitter.com/cJNMOZCwPA

If you wanted a good laugh, there you have it. In case you missed it, it's Bon Jovi's hit song, and from all we know, perhaps it's inspired by true events.

No, it's not a song about a couple going against all odds and trying to make it. It's about a relationship between one who snores and the other one who's trying to survive the torture.

Why can't they just admit it? What's up with all denial? You can't sleep because they're snoring, and when they're awake, they're telling you that they're not snoring... Yeah, sounds legit.

Newlyweds: “I love resting my head on your chest and hearing your heart beat as I drift off to sleep.”

Married 15 years: “I recorded you snoring so you can hear how fucking loud it is.”

How come those who snore were capable of being normal human beings during the dating phase?

Try to explain that one, you vicious snorers!

Rolling in the deep

Couldn’t sleep last night. Too busy rolling my husband over and over like a damn rotisserie chicken to stop him from snoring.

Nothing works. The moment you think 'hey, it worked,' they start all over again. All hope is lost.

First date question after genotype , Do you snore?

It's hard to force someone to admit they snore, but how about we make it an obligation? Tinder should have that option: if you're a snorer, you can only match with other snoring types. Though it sounds extreme, we bet fewer marriages would end in divorce.

Not getting proper sleep leads to this

4am. You are asleep again. I am awake. I am making a tape of you snoring. I will use this in court when I plead insanity.

It's bad for your sanity and your immunity. Sleeping next to a partner who snores will also make you uglier. Yes, we know they're not doing it on purpose... But for the love of everything sacred, just don't snore every single night!

Yes, those of us who don't snore are mad. We're also happy that our other halfs are so relaxed while we're secretly recording their sleeping habits. It's a sign of a happy, healthy, mature relationship.

Not even a Brave Heart battle scene can compare with the sounds your loving partner's making while they're sleeping.

To love even when you hate your person

Snoring: Because it's important your partner is reminded that you're an arsehole even when you're asleep

You know that your partner is a caring idiot. You also know that waking up next to them is a nightmare because it's the middle of the night, and the noise they're making is too much. One night they sound like a chicken, the next like a freaking T-Rex.

It's mostly a guy thing

It's science, and you can try to fight it, but you won't win. Why? Because the main sources of snoring are men, and women have to keep up with that. That's why women live longer: to make up for all the lost sleep!

Observations on life: the loudest snorer in the room always falls asleep first.

The rest fall asleep as soon as the loudest snorer wakes up.

Even celebrities agree that snoring is the worst

Snoring used to really annoy me.
But now I look at it as this subtle reminder that someone you love is sleeping next to you.

Unless it’s someone who snores like my dad, where you can hear them from down the hall with the door shut. That shit is otherworldly.

The Riverdale's star shared her words of wisdom. Love's great and all that, but there are some limits.

Once in a blue moon, the one who snores might get something like this, which is basically an invitation to sex.

It's not ideal, but it's something. You got to keep that romance alive and all!

Snoring can be recorded, hence the whole 'I didn't hear it' is pretty much the worst. Admit it, own it. You'll still be the same person, but don't make a fool out of your sleepy partner.

Hearing people snore is so irritating. 100% worse than people chewing

You can pick one but live with your choice for the rest of your life. Loud chewer or snorer? Who will be your Prince Charming?

You can't trust a partner who snores

We warned you - those who snore the loudest will deny it. In the process, you'll lose your dignity and your covers.

What is it boy?

Timmy's stuck in a well?

You start to come up with scenarios and talk to your partner, who snores as if nothing's happening. Why? Because you're starting to lose your mind.

But don't, because help's on its way.

Meet The Somnibel Pro Solution. It's your new BFF, which will allow you to punish your snoring partner. Lovingly, naturally. 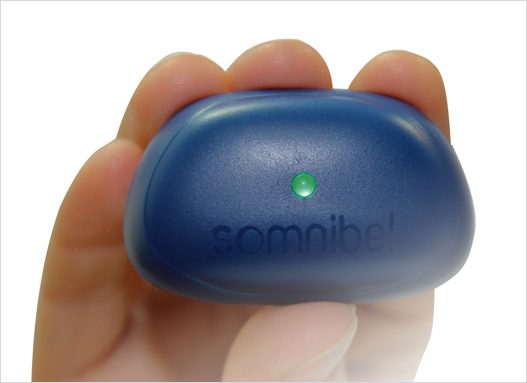 It is lightweight, with a hypoallergenic adhesive, and claims to put an end to the snoring once and for all.

So, what's the catch?

You kind of have to shock your partner...

See, you place it on one's forehead, and when they roll on their back, it shocks the one who snores to encourage them to roll back over onto the other side.

The Somnibel Pro Solution - because everyone deserves to sleep

We're not saying this is an ideal solution.

But, if you're starting to get desperate, the worst that could happen is that it doesn't work. Since you're already used to not sleeping, this device can only surprise you in the best possible way.

Having doubts is natural, but can you afford any more sleepless nights?