With the heat wave soaring in the UK, women are sharing their thoughts on men walking on the streets shirtless to cool down.

Europe's weather forecast has made for alarming readings for weeks now, with temperatures rising over 40C in many northern countries.

While many people are spending their days cowering under umbrellas, fighting strong winds, and complaining about grey clouds, men are taking things further, going shirtless to the streets, stripping to the waist in shopping malls and at public parks. 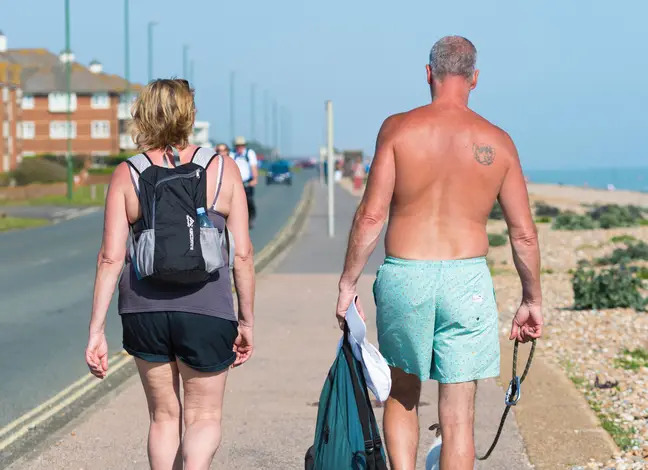 And one Reddit user took to the platform to ask women what they thought about men who make such fashion choices.

"Ladies, what are your thoughts on guys who walk around with their shirts off? And I don't mean at the beach or on holiday, I mean guys that walk around the town center shirtless."

Some commenters even claimed that men go shirtless in the parks, commuter trains, and other public transport.

In the comments, one woman expressed her opinion that men walking around shirtless is "rude and a bit selfish."

⚠️ As well as extremely hot conditions during the days, it will remain oppressively warm overnight, especially in towns and cities pic.twitter.com/iKsUvdD2YU

"Wearing a basic amount of clothing shows basic respect for others."

"I would be slightly wary of men who are shirtless because I would expect it to be indicative of a lack of boundaries and self-restraint in other areas too."

The same went for another woman who said she "hated" seeing men go shirtless, saying:

"It's hot for everyone. Keep your dang T-shirt on, my dude. Or wear a vest top, sports top, or whatever! I just don't like seeing sweaty torsos in my local Aldi lol."

Another woman argued that if they have to cover their chests, men should cover theirs too.

"This includes runners in the park. Nike can start selling little crop tops for men."

"Hey, we should be going the other way on this one. [Men] get to go topless (and I've nothing against this), so should we. Free the nipple."

While many users said they have "no objections" to men walking shirtless in the park or on the streets, it does "gross [them] out" in "shops" and other similar settings.

With the Metrological department warning "exceptional heatwave" all over the UK, the controversies of men going shirtless will not go away soon.