Airports are busy and can be challenging to navigate. There is a lot of excitement from those visiting family, exploring new places, and so on.

Often, if one is not paying attention, it can lead to stressful situations like ending up in the wrong terminal, losing luggage, or worse, missing flights.

In 2017, Emmit Walker had booked a first-class flight to the Dominican Republic for a holiday with some friends, so he did not expect to feel stressed.

The African-American music executive and his friends got to the airport feeling pretty excited. However, they did not expect what came next.

As mentioned earlier, a lot can go wrong, and it is usually advisable to arrive at the airport a few hours before your international flight to reduce the chances of things going wrong.

So, Emmitt got to the airport on time and was one of the first in line when the call to board was made.

While waiting in line for his turn, a woman standing behind him in the queue seemed baffled why he was there. In fact, she kept staring at him in a condescending manner.

The woman approached him, saying, "Excuse me, I believe you may be in the wrong place; you need to let us through. This line is for priority boarding."

With raised eyebrows, Emmitt turned to the woman, took out his ticket, and showed it to her telling her that he knew exactly where he was and where he was heading. The woman scoffed and told her friend, "He must be military or something, but we paid for our seats, so he still should have to wait."

To say Emmitt was astonished was an understatement. He could not comprehend how she so easily assumed he did not pay for his ticket.

The racism was undeniable. So, he replied, "Nope, too big to ever be in anybody's military. I'm just a n**** with money."

Emmitt recorded the entire interaction and posted it on Facebook, and the post went viral quickly. This was hardly a surprise because assumptions like this should not exist anymore.

We are all equal, and the woman's audacity must be addressed.

In addition to the viral post, Emmitt posted a selfie with the nagging woman standing behind, noticeable trying to ignore him. Among the comments on the post, there were a few that stood out.

In response to what Emmitt said to the woman, one comment was, "The power of an educated man with patience."

Another comment said, "Never judge a book by its cover. She is so ignorant it makes no sense that people like her still exist. Enjoy yourself, you handled it well."

Someone in the military made a particular comment. "I'm prior military, and I'm offended. What does the military have to do with your ability to pay for first class? Heck, they gave us economy seats. Nope, not a valid reason to assume why you would have 1st tickets. These racists are bold!" the commenter said. 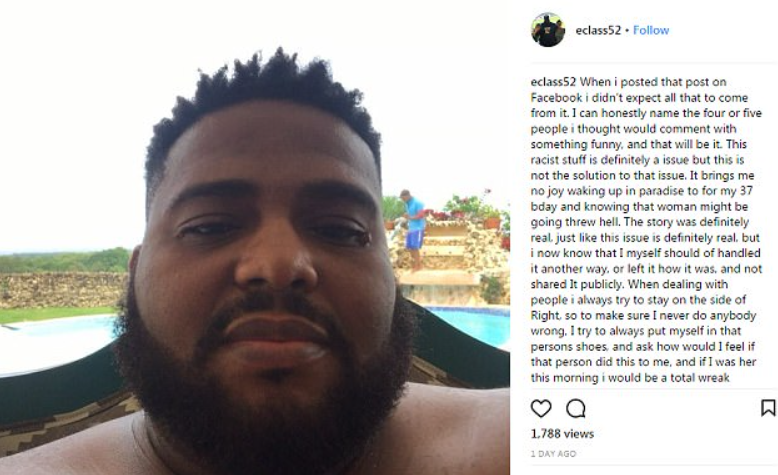 As a result of the post going viral, the woman received much backlash. This made Emmitt feel bad for her, and he made an apology post.

This just goes to show what a fantastic guy Emmitt is. He recognized that even if the woman had her faults, he did not intend to shame her publicly to the world.

He shared his apology on his Facebook, showing the woman who is the bigger person.