A Singapore woman was on her way home when she stumbles upon an amusing nature scene — two rats fighting.

While witnessing rats fighting is quite a sight, seeing a cat nearby watching the fight made things even better.

Cats and rats fights may seem 'normal' to many people, especially if you grew up watching Tom and Jerry cartoons.

But spotting two rats fighting each other is undeniably quite rare.

And that's possibly why Cheez Goz's video on social media is going viral.

"On my way home to this amusing sight! We're so used to seeing cats fighting. But have you ever seen rats fighting? A cat that never interrupts is a smart cat."

"Guess which rat did the cat chase after? The one that runs away from my direction or the one that comes towards my direction? Guess correctly. I'll buy you coffee."

In an interview with Bored Panda, Cheez shared:

"I was on my way home. I saw those 2 rats running and chasing each other around trying to provoke one another, and they went separate ways while I wanted to film it."

"Then it happened again, and I quickly took a video of the process. They were already running around upon me reaching my block because I heard some sounds."

As it turns out, a cat was watching the two rats fight, without interrupting. 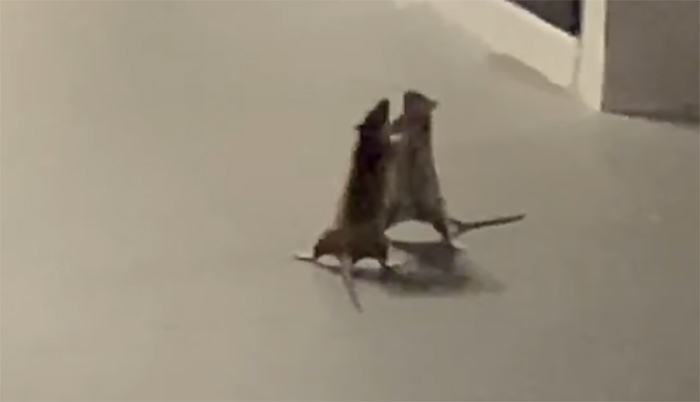 Eager to know what happened next?

After fighting for a while, the rats gave up and went separate ways.

And while fighting, the two little guys were so into it that they didn't even notice Cheez standing nearby filming.

"The two rats just gave up and went separate ways. One ran away from the camera. One came towards the camera where I was standing. It didn't seem to notice I was filming the process and ran towards me."

"I freaked out as it was approaching me, causing a sudden movement. The rat then ran for its life, and that's when the cat saw that the rat was running and charged towards it."

"However, the cat missed because the rat went under the drain. The rat was really fast!"

After sharing the rare-video on Facebook, Cheez didn't expect it to go viral.

"I didn't expect my video to go viral. I thought it was a rare sight! And it was pretty amusing. So I shared!"

The clip has gained lots of attention online, and some comments from viewers are truly hilarious.