As much as we hate to tell you this, if your cat is peeing on your bed, then there's an issue. Generally speaking, any inappropriate urination or other strange behaviors such as cat "love bites" are a sign of potential trouble.

Your first step should be to take it to a vet because a medical problem might be the reason behind your soiled bedding.

Do Cats Pee Out Of Spite? 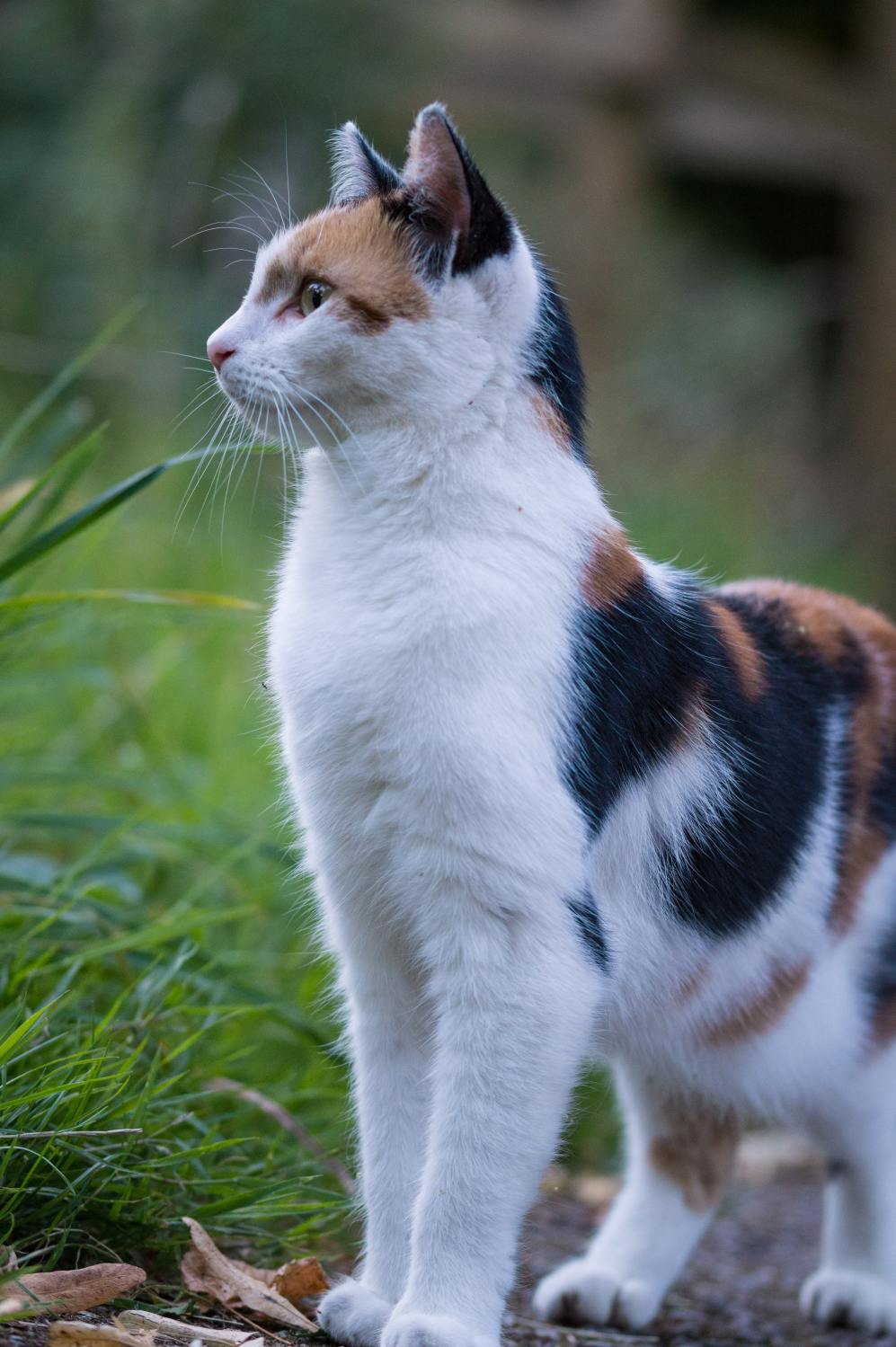 Some people might believe that cats can pee on their beds out of spite. To some extent, this might seem true because cats have been known to pee on their owner's beds as they watch, making it seem like they are doing it "on purpose" as a way "to get even."

In reality, the cat does this for a multiplicity of reasons, including issues like stress. Your furry little friend is not actually that diabolical.

Cats don't get revenge, but they can do a lot of things as a way to cope with what they are going through, including peeing on their owner's beds.

Here are the real reasons your cat sees your cozy bed as a giant litter box, and what you can do about it. 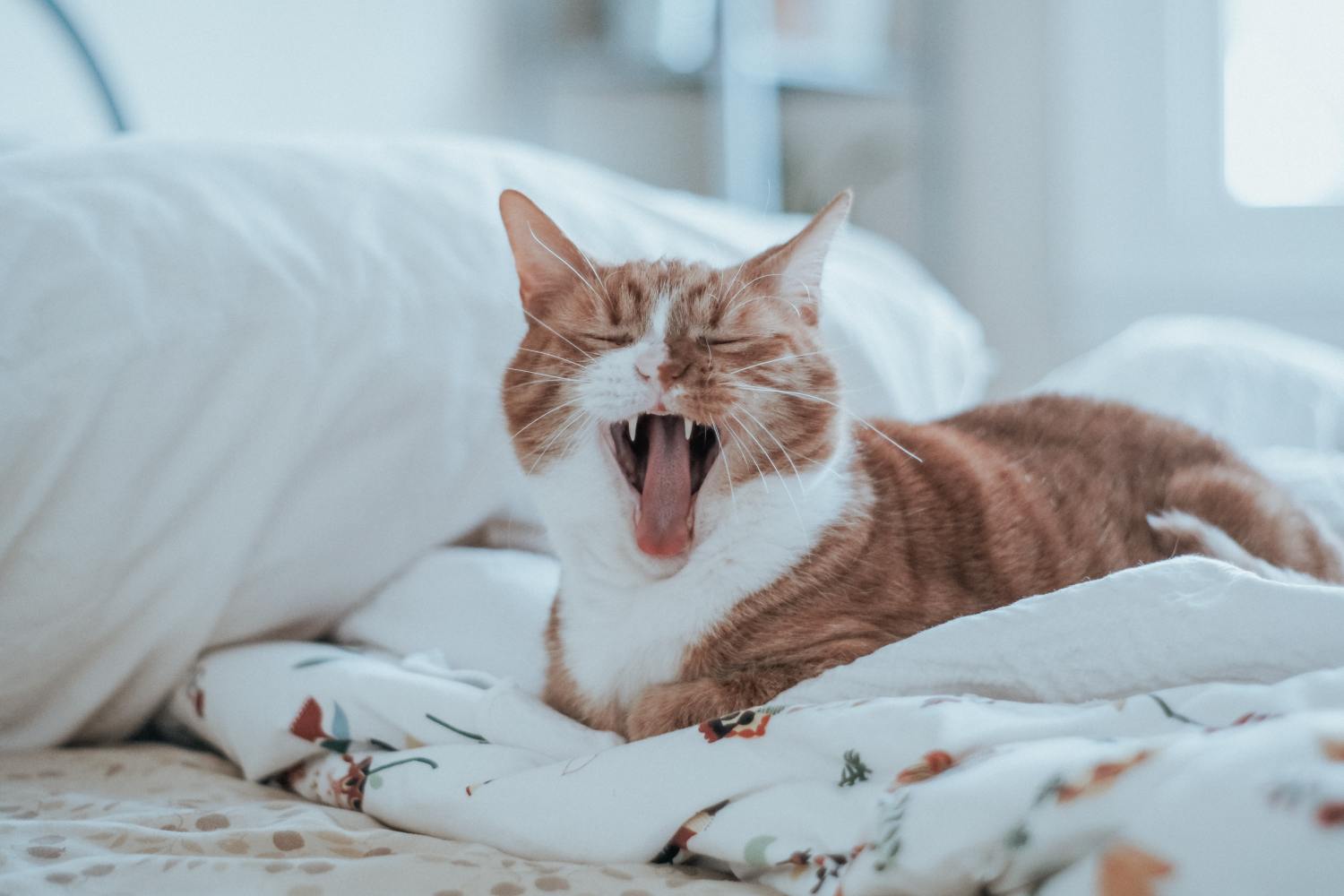 A medical problem might be the reason your cat has peed on your bed. Issues like bladder stones and bladder infection can cause serious inflammation and an urge to urinate in unusual places.

UTIs, diabetes, and kidney disease might make it hard for the cat to make it to the litter box. So, if it often hangs out on your bed, it might end up peeing on it if it suffers from such medical issues.

If your cat is suffering from such diseases, it may also come to associate the litter box with pain and discomfort and try to find alternative places to pee. 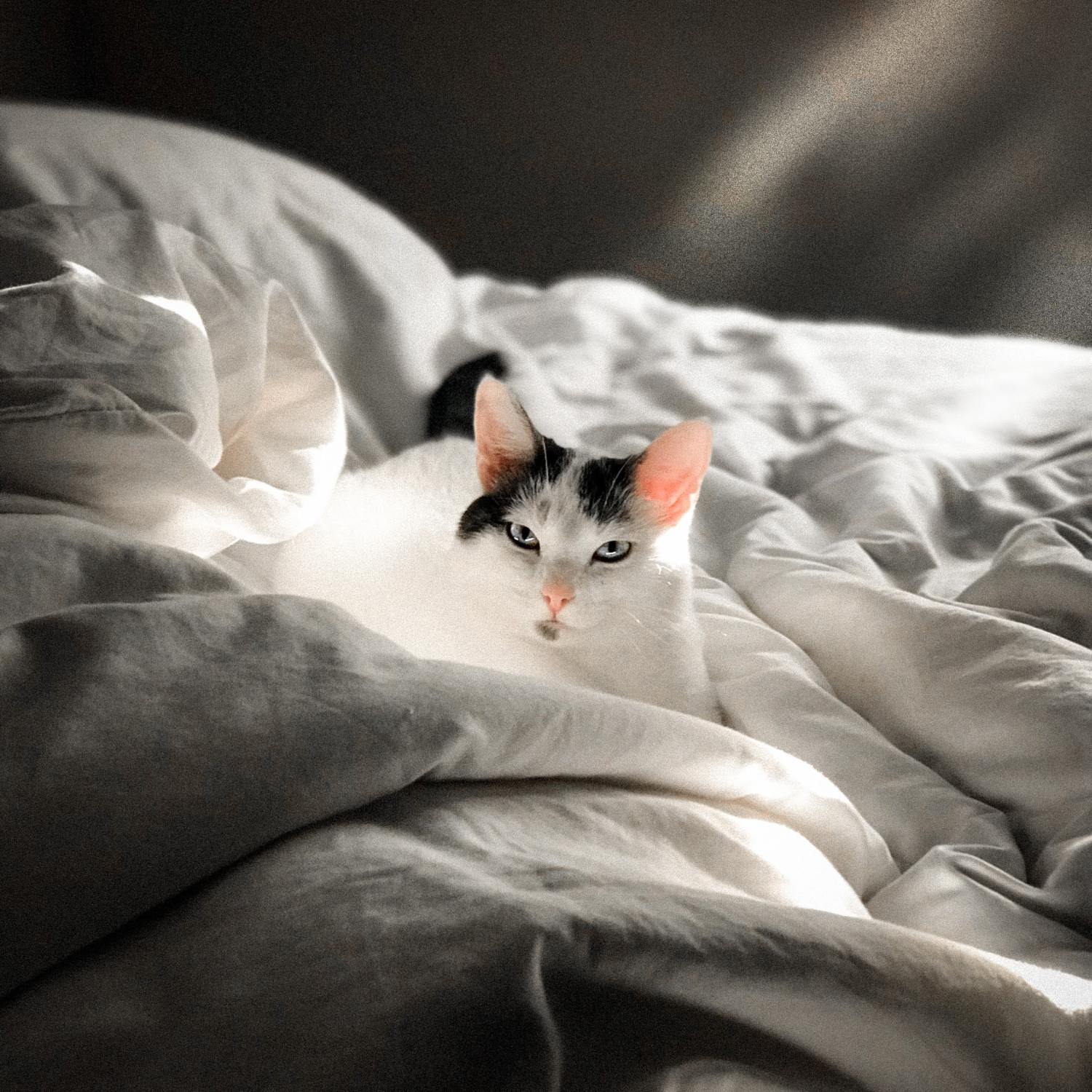 Usually, cats pee on the bed due to stress or anxiety, which tends to put their hormonal and chemical balances out of order. This problem is called idiopathic cystitis, and it can easily be solved by getting rid of stressors in your cat's environment.

However, it is also advisable to see a vet first to rule out any infections that might be causing the issue.

3. Its Litter Box Is In A Bad Location 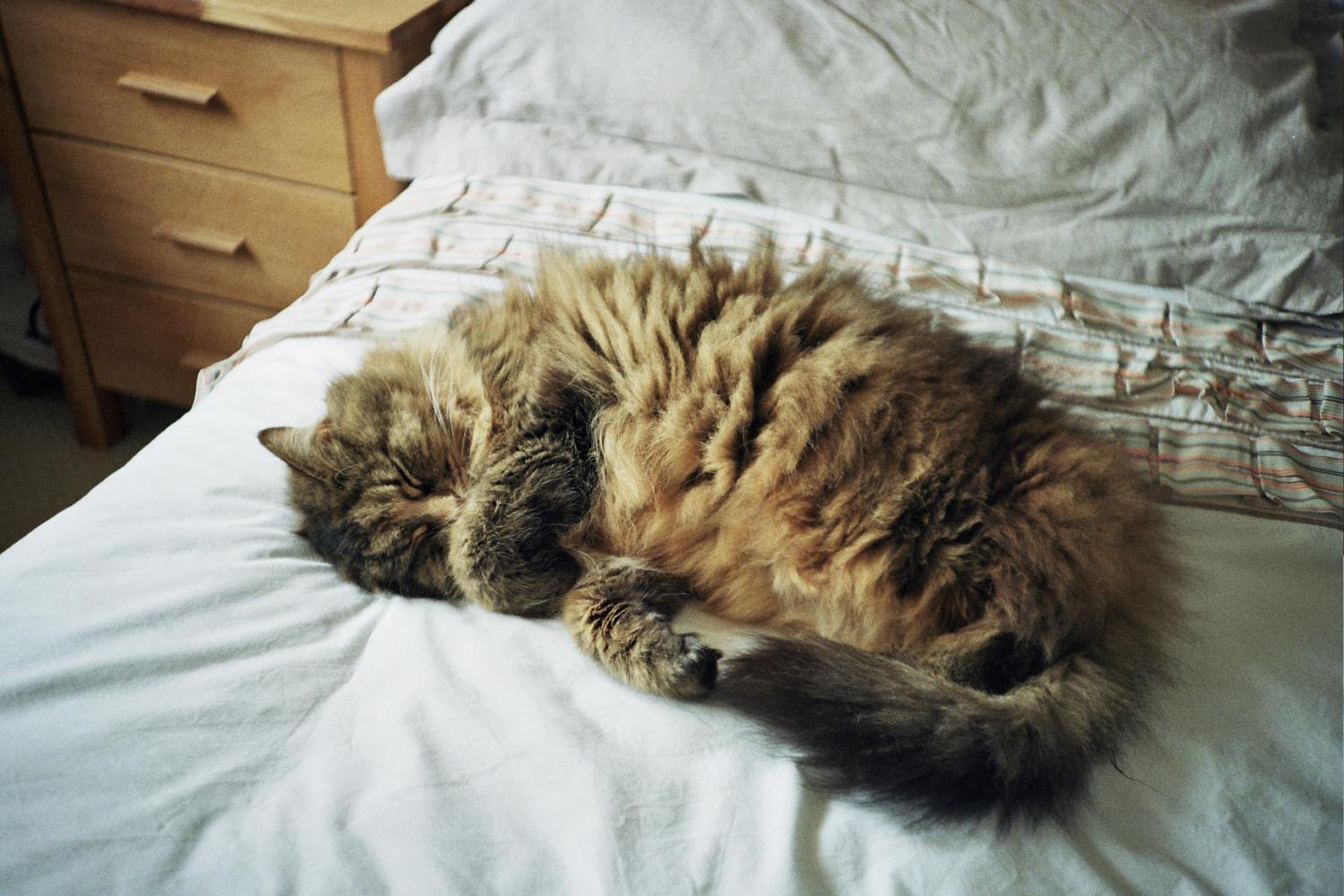 If your cat spends a lot of time in your bedroom, but its litter box is one floor away, then that might explain why it pees on your bed.

The truth is that your pet might not be to blame for this. The chances are that there are times your bedroom doors are closed, which leaves it with no other option but to pee on your bed.

Similarly, if the litter box is in a busy area, your cat will not be too comfortable using it. Cats need a little privacy too, and too much noise or attention will make them find better places to relieve themselves.

Also, the litter box might be in a great place that is easily accessible, but there might be an obstacle in the way. For instance, your dog might like hanging out on the path leading to the litter box, which will make your cat uncomfortable using it.

In short, the litter box should be in an appealing location.

4. You Are Not Home Often Enough 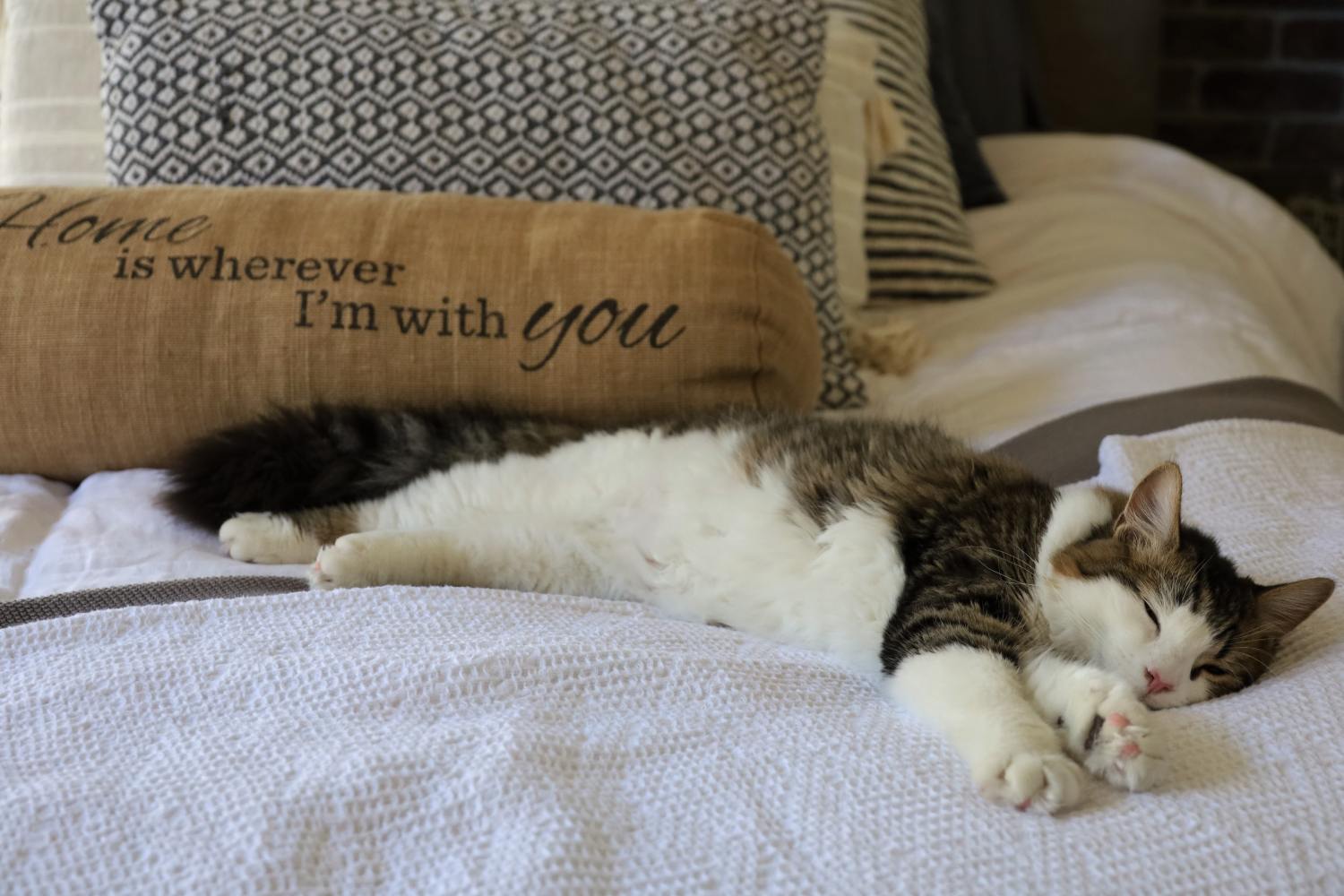 Cats don't like a solitary life, and they can suffer from separation anxiety if they don't interact enough with you or other animals.

That is why after going away on vacations, some people come back to ask why the cat peed on their beds. This is the cat's way of saying that it is not happy about the absence.

Also, you might not have gone anywhere, but if you spend less time with your cat than was previously the case, then it might pee on your bed to feel closer to you.

Cats need stimulation, and if you are not playing with it enough or giving it enough amusements in your home, it can get bored and start misbehaving.

In case you suspect that the cat is peeing in your bed because you don't spend enough time with it, you can try and play with it more. 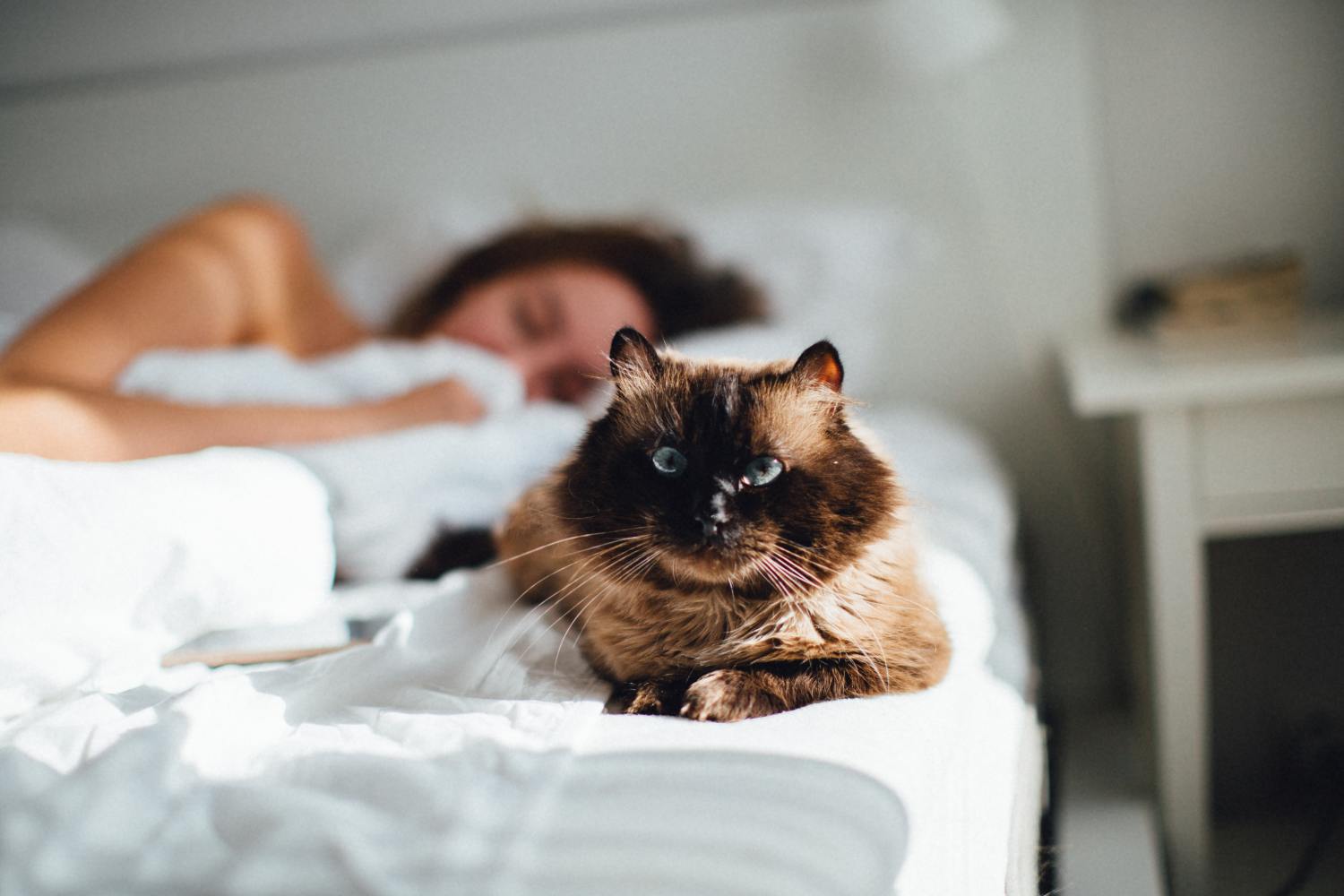 You probably have a few litter boxes that your cat can use. However, they might still not be enough.

In the case of multiple cats, it's important to note that some cats will not share litter boxes with any other cat.

Similarly, kittens have a problem controlling their bowel movements, and lack of adequate access to litter boxes might cause problems like having your bed peed on.

6. You Used The Litter Box For The Wrong Reason 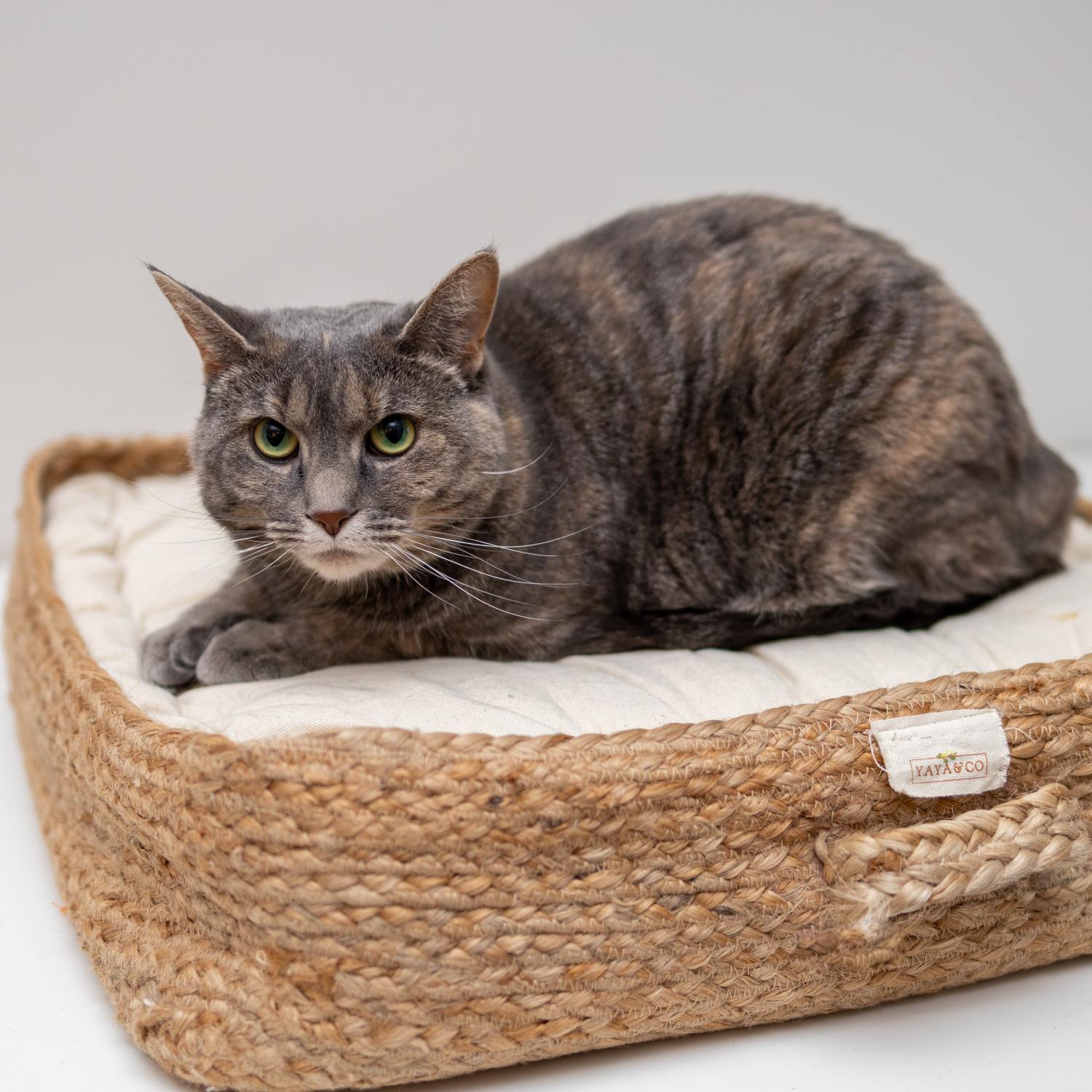 Have you ever used the litter box as the place to trim the cat's nails, administer medications, or get it into a carrier? The chances are that your pet now has a negative association with it and tries to avoid it.

It is for this reason you should never punish your cat while in the litter box. 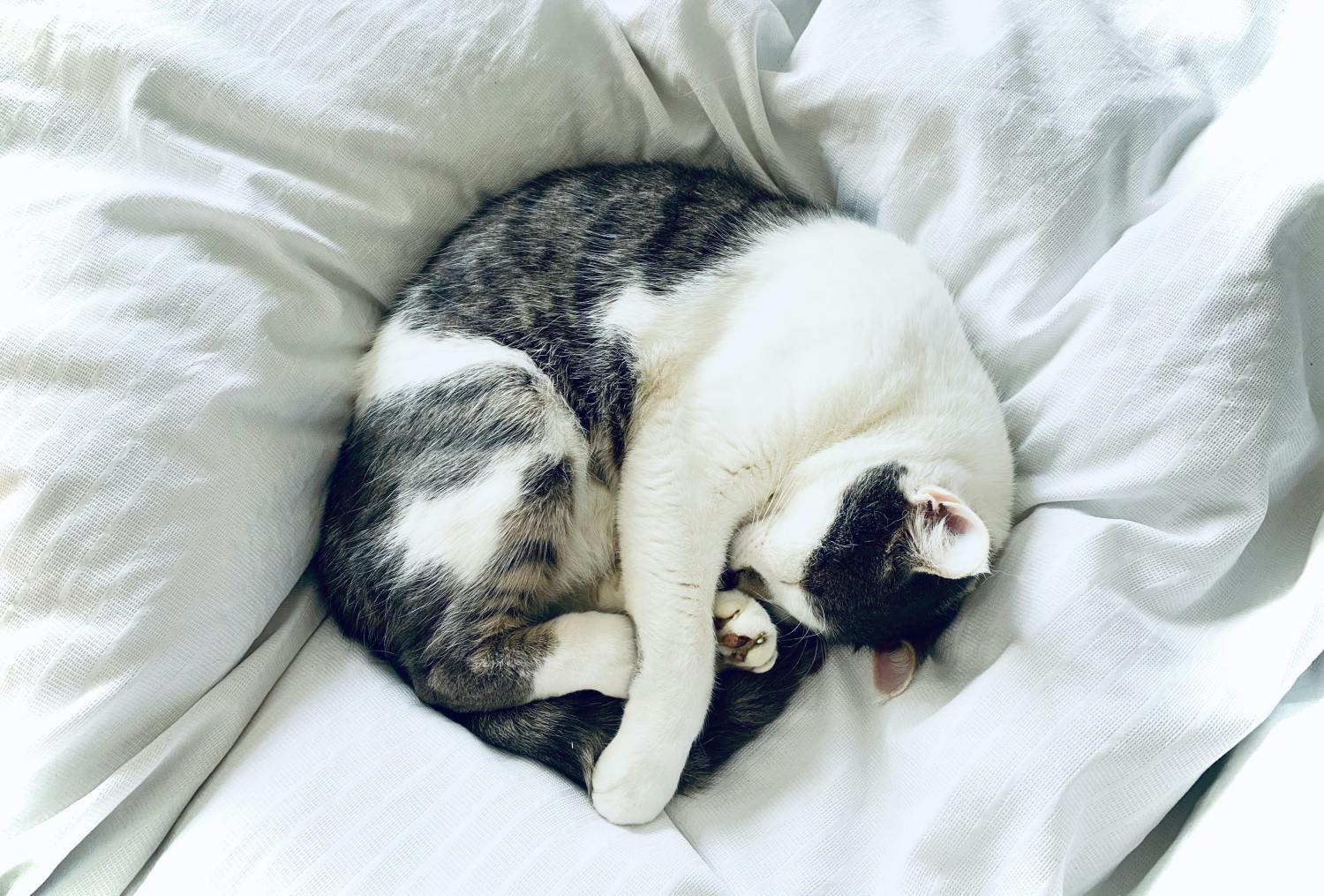 It would be best if you cleaned the litter box about once every day. So, if you do it less often, your cat is bound to find it uncomfortable and find other places to do its thing, including your bed.

8. The Cat Hates The Litter Box You Got It 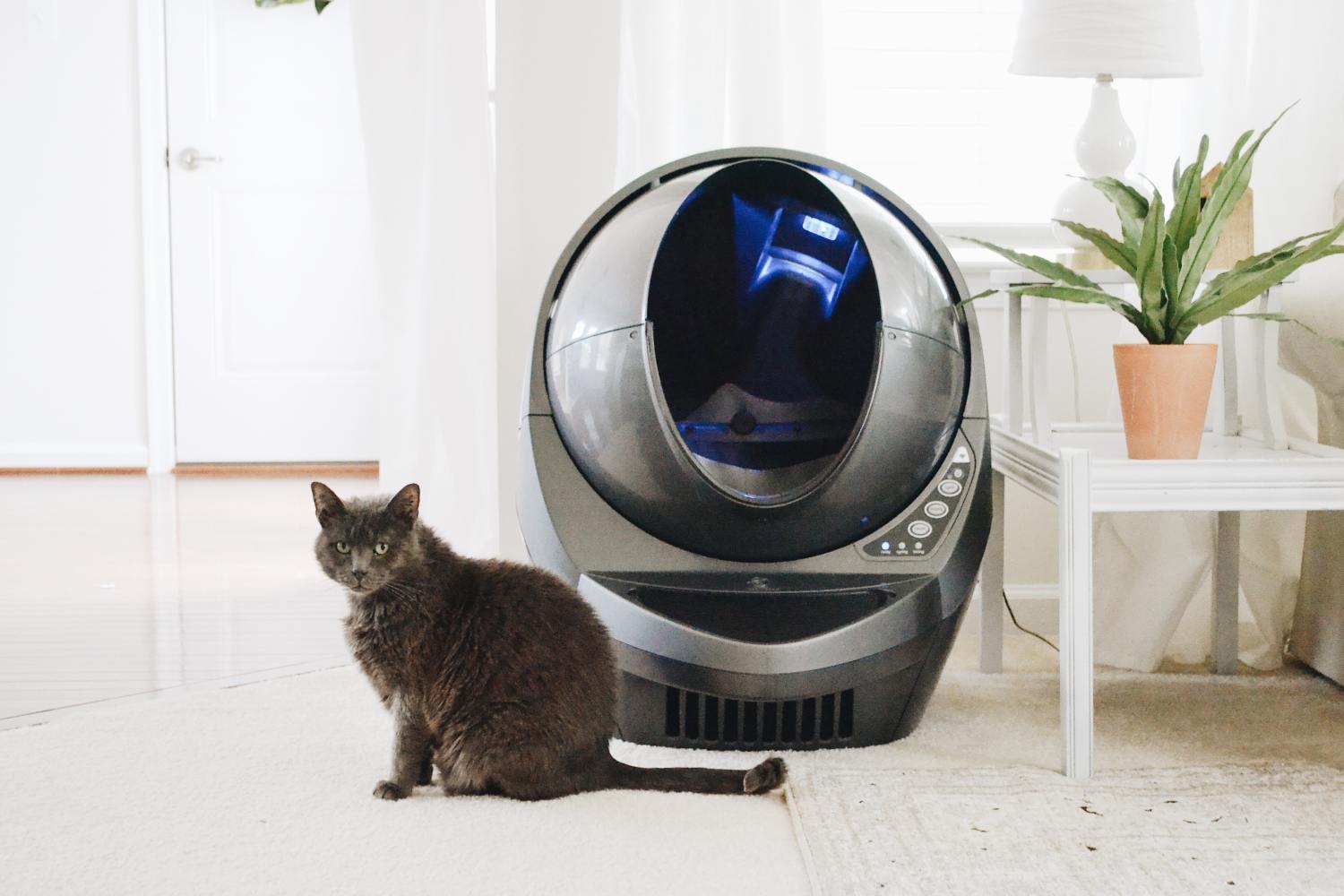 If your cat's litter box is uncomfortable in some way, your cat will grow to hate it and will eventually avoid it. In general, cats hate litter boxes that press any parts of their bodies during use.

Also, your cat might have an issue like arthritis, which would make a high litter box too difficult for it to use.

Ideally, your cat's litter box should be about one and a half times its length, without considering the tail.

9. The Cat Litter Is Off-Putting 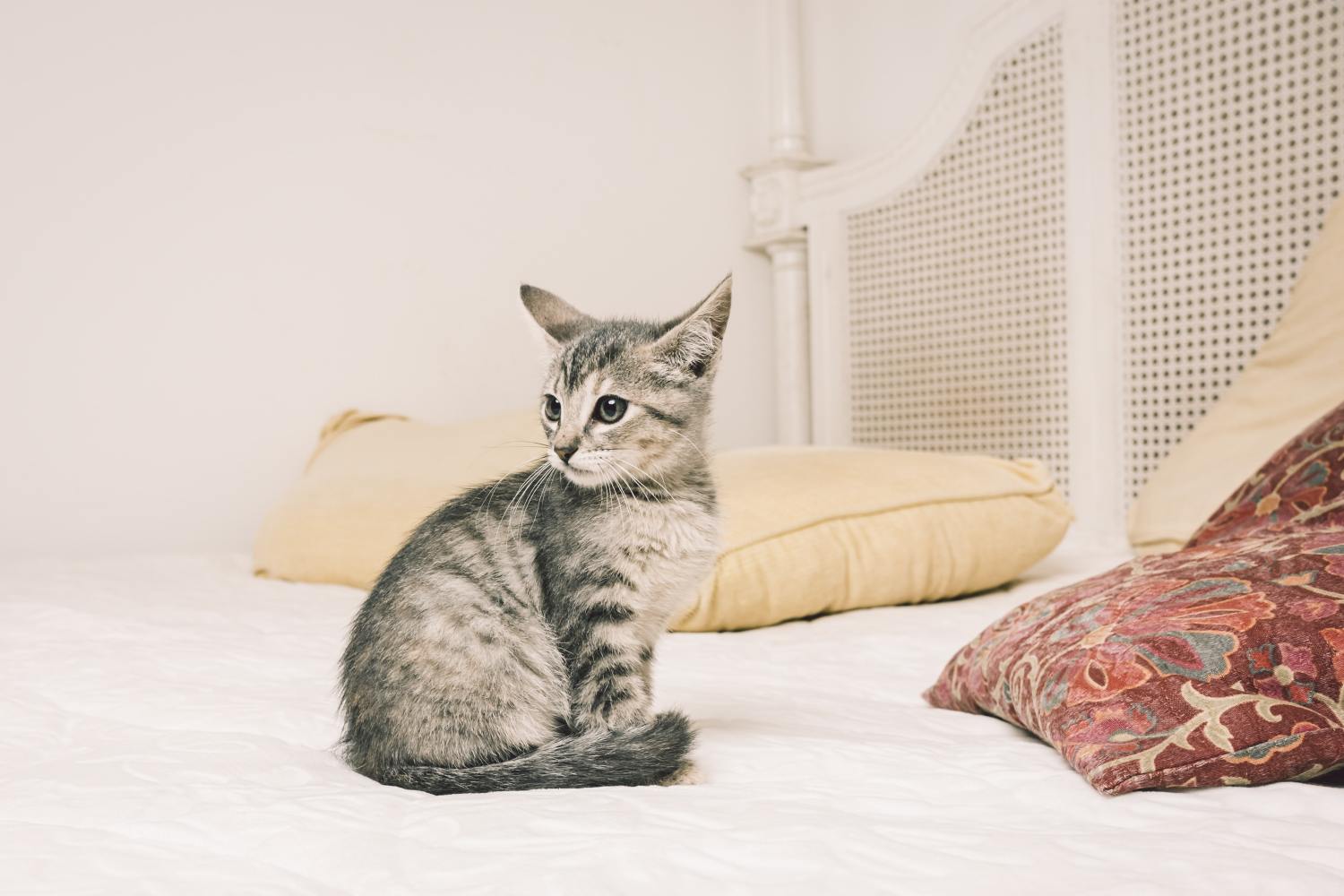 Although you like a certain kind of cat litter, your cat might not. For instance, once your cat realizes that the litter is not soft enough, it will not like it.

Some companies will also make scented cat litter, which might smell fantastic to you but is actually off-putting to a cat.

How can you know your cat does not like a certain kind of litter?

It's simple: you can place two litter boxes side by side with different kinds of litter in them and see which sort your cat prefers.

Good cat litter should be absorbent. Cats naturally like to hide their odor, and cat litter that does not achieve this is not good enough for them.

Instinctively, they know that predators can track them using their scent. 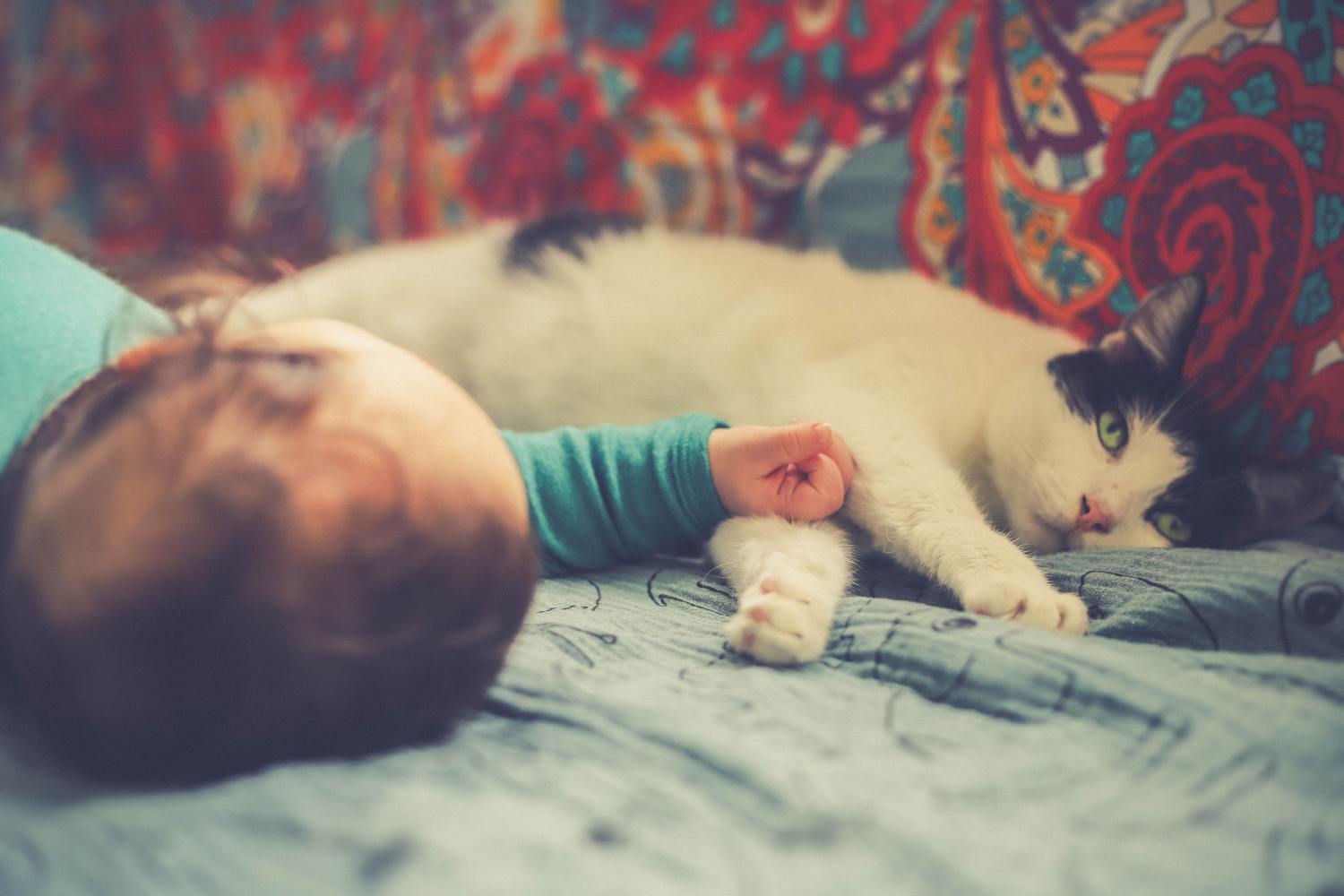 If you have a new baby, dog, or cat, your cat might react by peeing on your bed. Cats like predictability and a guest can quickly change that about their environment.

If there has been a huge change in your home, all you need is patience as the cat gets used to the changes. Understand that it might take months for a cat to unlearn a behavior.

That said, you can avoid bringing other cats into the house if possible so that the cat does not feel a need to "reclaim" its favorite places such as your bed by peeing on it. 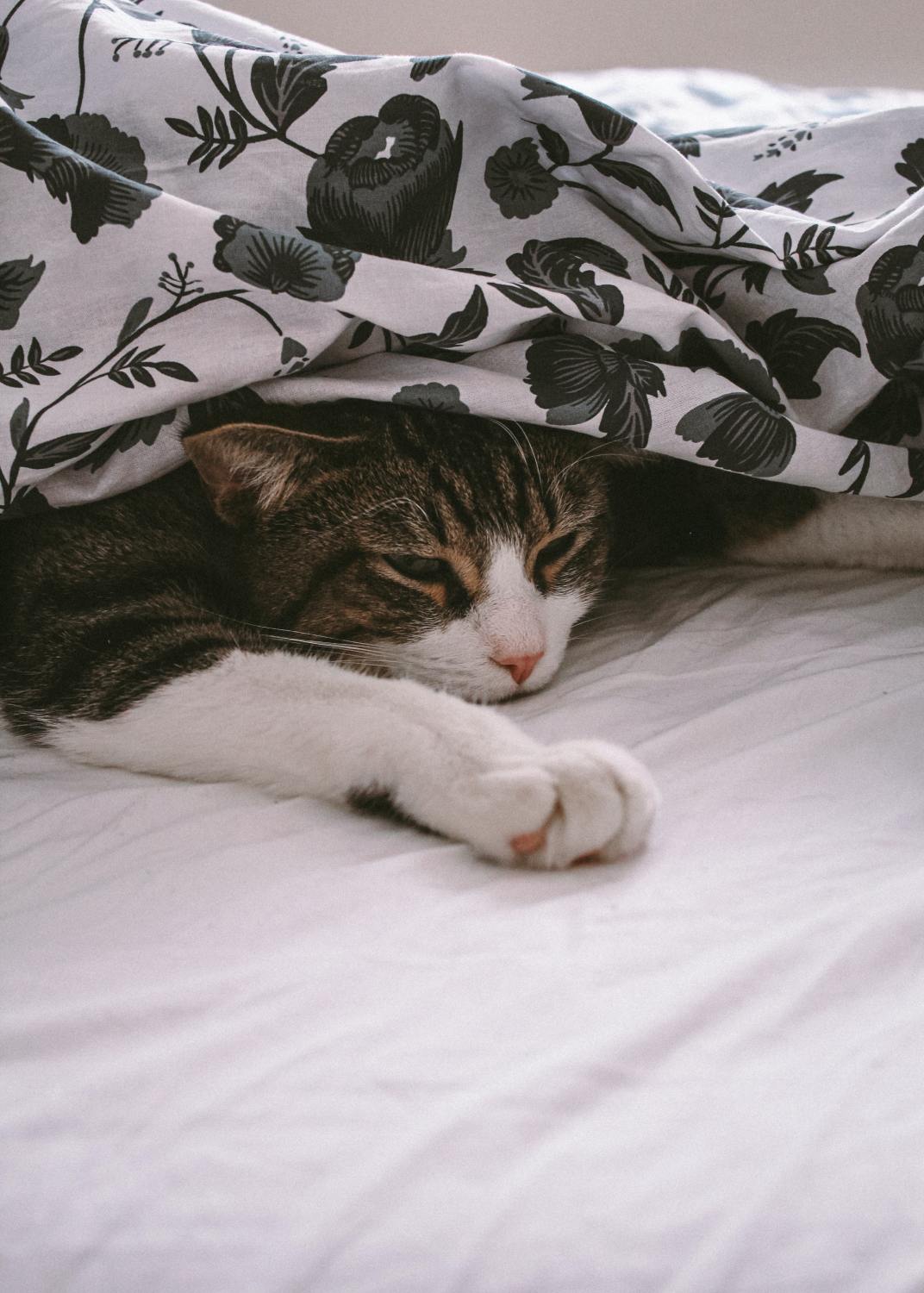 Cats need to feel safe, and that shouldn't be too hard for a devoted cat parent. If the cat has to compete for basic resources like food, water, litter boxes, and your attention, then unusual behavior might result.

The cat can also feel unsafe if there is tension between you. The estrangement between the cat and another family member or pet can also cause this problem.

How Do I Stop My Cat From Peeing On My Bed? 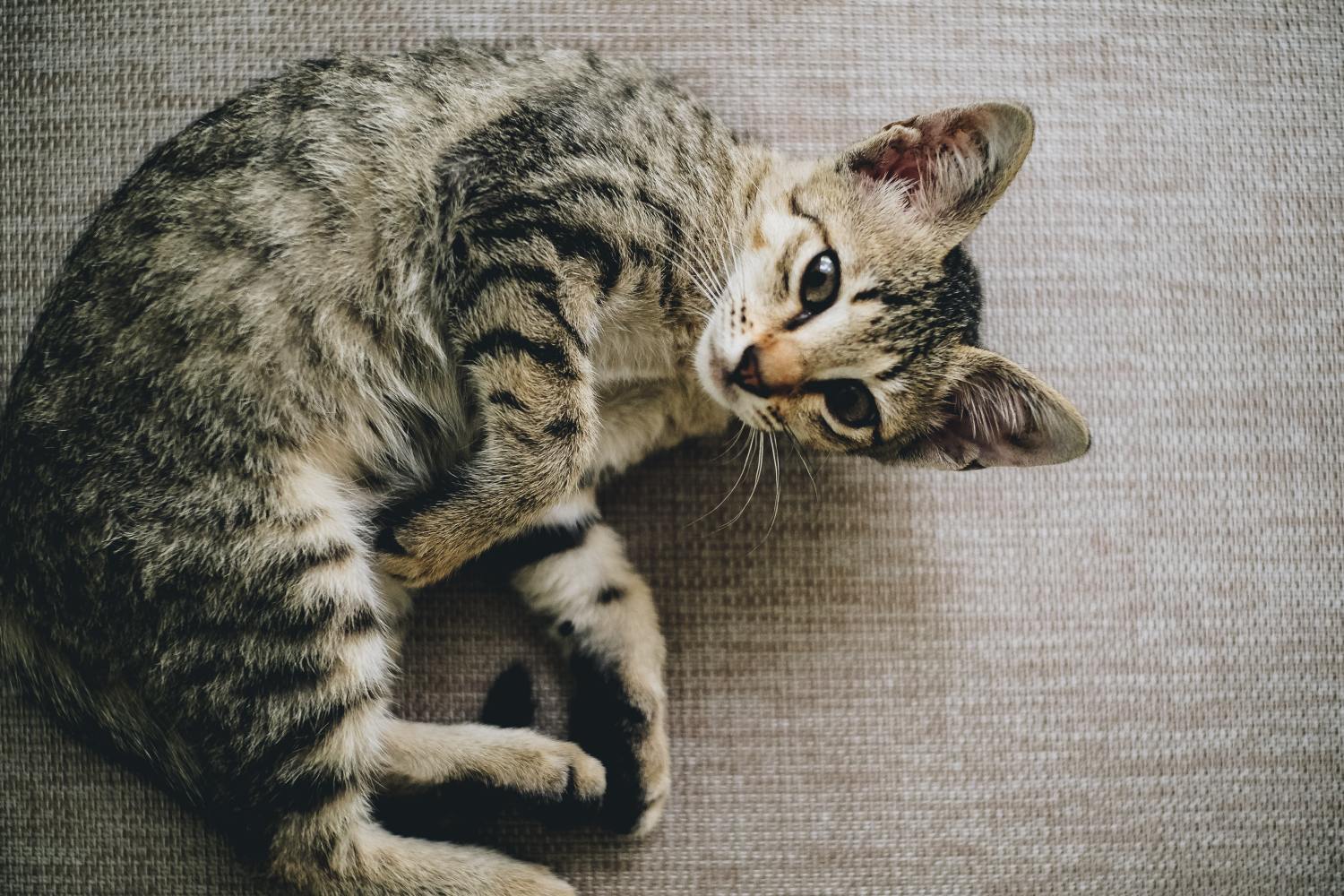 There are many ways to stop your cat from peeing on your bed. However, the most important step is taking the cat to the vet to rule out any health issues. The cat might not be sick per se, but it might be in heat and react by soiling your bed.

Otherwise, getting your cat to stop peeing on your bed is a process that takes time. You will have to be patient.

Also, make sure you clean your beddings thoroughly, as the cat will be motivated to come back if the bed still smells like pee. You can use an enzymatic cleaner to stop your cat from continuing to use the bed as a litter box.

Making the bed unattractive for the cat is also an option. You could cover it with something like a shower curtain or another nonabsorbent material your cat will hate.

Another option is to make the bed a special place for the cat by playing with it there and giving it treats while you are hanging out there. That will force it to think of another location as a toilet. Cats are smart and won't eliminate where they eat.

Closing the door to your bedroom might also solve the problem as it will lock the cat away.

If nothing seems to work, you can also get a certified cat behavior specialist involved. This professional might have the skills necessary to train this behavior of your cat.

You might also have to get your pet neutered or spayed to make it less likely to mark its territory by peeing on your bed.

So, the next time you find your sheets soaked in cat urine, you will at least know what might have caused the problem. Basically, when your cat pees on your bed, it says something, and it's your job to figure out what the problem might be.

Don't think you are a bad cat parent because your cat has peed on your bed. It happens to the most devoted and loving cat owners in the world. More importantly, don't take it personally and start assuming your cat is spiteful for doing it.