In Star Trek: The Next Generation, Whoopi Goldberg played the role of a bartender and a wise entity known as Guinan. Now, it seems like she will be back in the same role during the upcoming season 2 of Picard.

There have been rumors of Goldberg's comeback in the Picard series for a while. These rumors have finally been confirmed.

Officially, the show's second season will focus on Jean-Luc Picard (John Stewart) and his crew as they take a bold and exciting journey into the past.

Consequently, this is the perfect time to bring Guinan back in consideration of the time travel storyline. Her presence will obviously change the show by giving it more weight.

A new image shows Guinan and Jean-Luc Picard together, which clearly indicates that the two have finally been reunited. 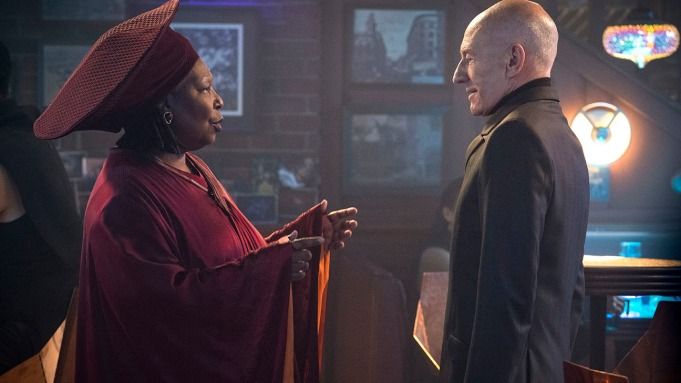 As Guinan, Whoopi Goldberg was a friend of Enterprise captain, Jean-Luc Picard, played by Patrick Stewart.

It was earlier revealed that Guinan had lived for centuries, and it was also revealed that her home was destroyed by parasitic aliens.

Goldberg is not the only character from Star Trek: The Next Generation who is coming back to Picard during its second season. John de Lancie, who played Q. Annie Wersching, will also be part of the crew.

Other actors who will be back include Brent Spiner, Alison Pill, Jeri Ryan, Evan Evagora, and Isa Briones, among others.

In a synopsis of the second season of the show, Picard has to get help from friends as he handles the dangers Earth faces in a desperate effort to save the future of the galaxy.

The second season of Picard will premier on March 3, 2022. Additionally, the show's third season has also been confirmed, which is an indication that the second season will not mark an end to the series.