What did Cleopatra look like? Was she a woman that owned surreal beauty? Was she the girl boss of our past?

History is fantastic, and it's so sad that it was one of the most hated subjects in school for many students. But, maybe young people need some time to process the fact that history doesn't have to be boring.

On the contrary - it can be cool. Too cool for school, anyway.

However, there are already too many questions coming to our minds when we talk about Cleopatra, the last Pharaoh of ancient Egypt.

But "what did Cleopatra look like" is probably the most intriguing question of all, given that she lived many years BC. 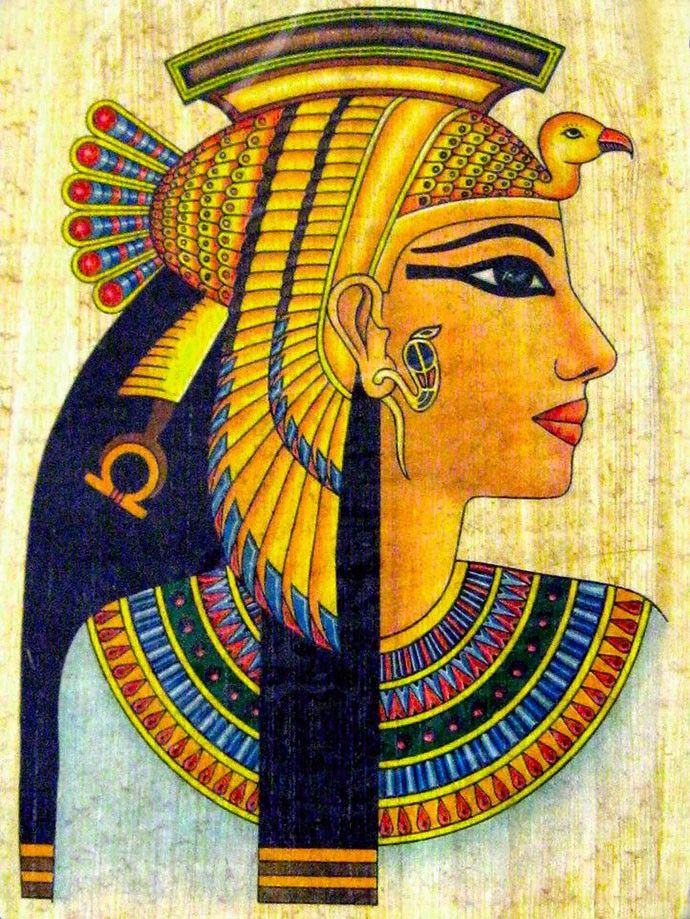 Also, there are many movies about these iconic people who marked history, but we have our reasons to doubt whether they are accurate or not.

Of course, movies are art. And art, through the years, had to go through some severe modifications to satisfy the preferences of people and moviemakers.

Once again, this brings us to our starting point: What did Cleopatra look like?

True, the way her face looked is and will remain a mystery. But let's not miss this opportunity to go through her life and see some of the details that history lessons may have missed.

What Did Cleopatra Do, And Other Questions About The Last Pharaoh Of Ancient Egypt 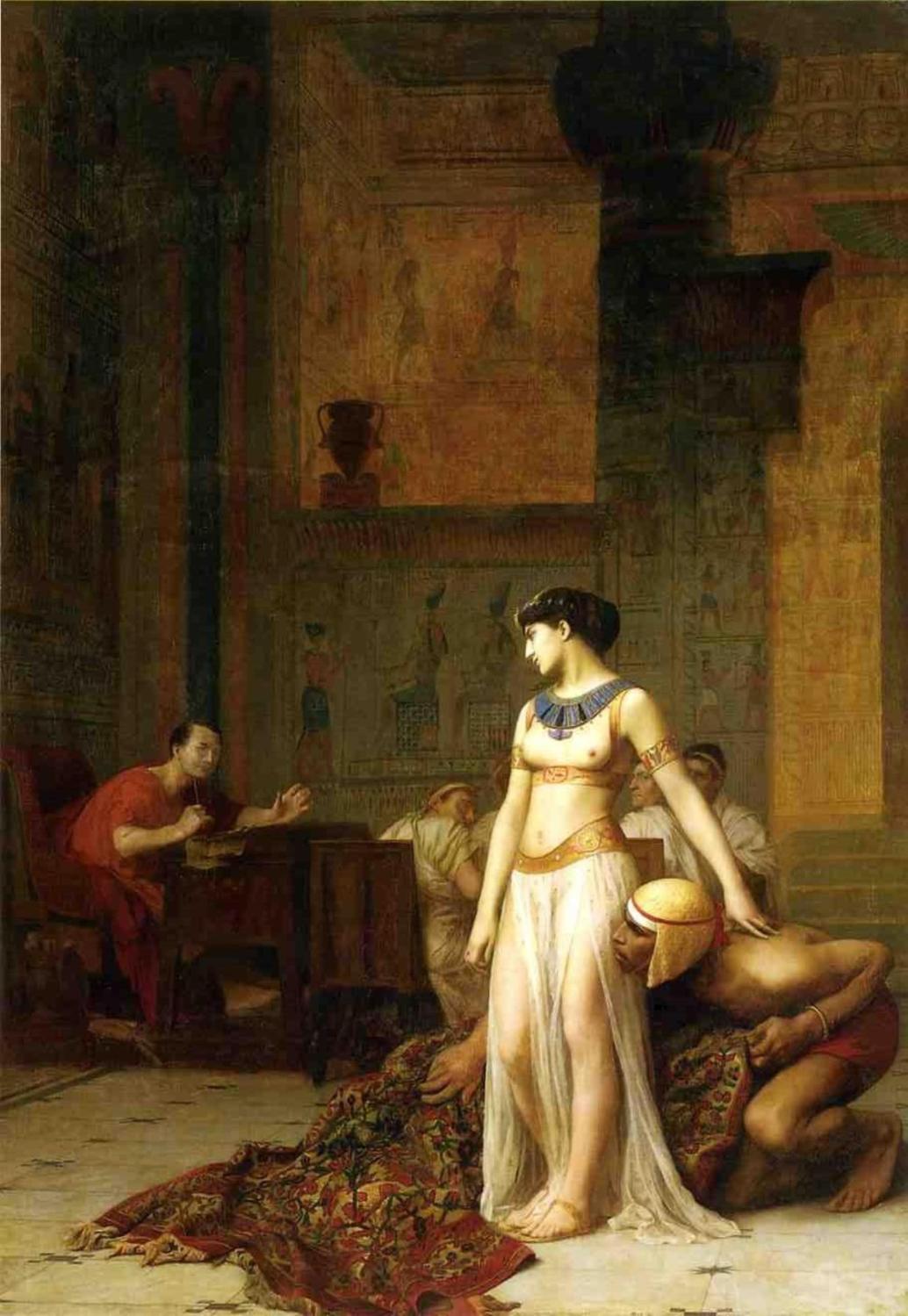 Cleopatra was a part of the Ptolemaic dynasty. It was an imposing dynasty, born right after the death of Alexander the Great in 323 BC.

Influential and strategic, her ancestors were in power for almost three centuries. Their domination over Egypt lasted until the Roman conquest in 30 BC.

Born in 69 BC, Cleopatra spent most of her life in Alexandria, situated in the Nile delta. This ancient city, founded by Alexander the Great, had a significant impact on Cleopatra's personality.

Alexandria was an essential part of the culture and cultural development in the BC years, for starters. For example, it had an extraordinary library for that time. There were continuous personal development and growth opportunities if you lived in Alexandria.

And luckily, Cleopatra was born, raised, and educated there.

Cleopatra spoke seven or eight languages and was the first in her family who spoke the Egyptian language without interpreters around her.

Cleopatra was the most important queen of ancient Egypt and one of the best-known women in the history of humankind. She ruled Egypt from 51 BC to 30 BC. She was just 18 when she sat on the throne, and she indeed was the one woman that ruled them all for 21 long years.

We are familiar with the fact that winners always write the history, and it becomes crystal clear that there are many distorted facts about her. But one could not miss an opportunity to ask the inevitable question: what did Cleopatra look like?

What Did Cleopatra Look Like, And Is There Any Evidence About Her Looks? 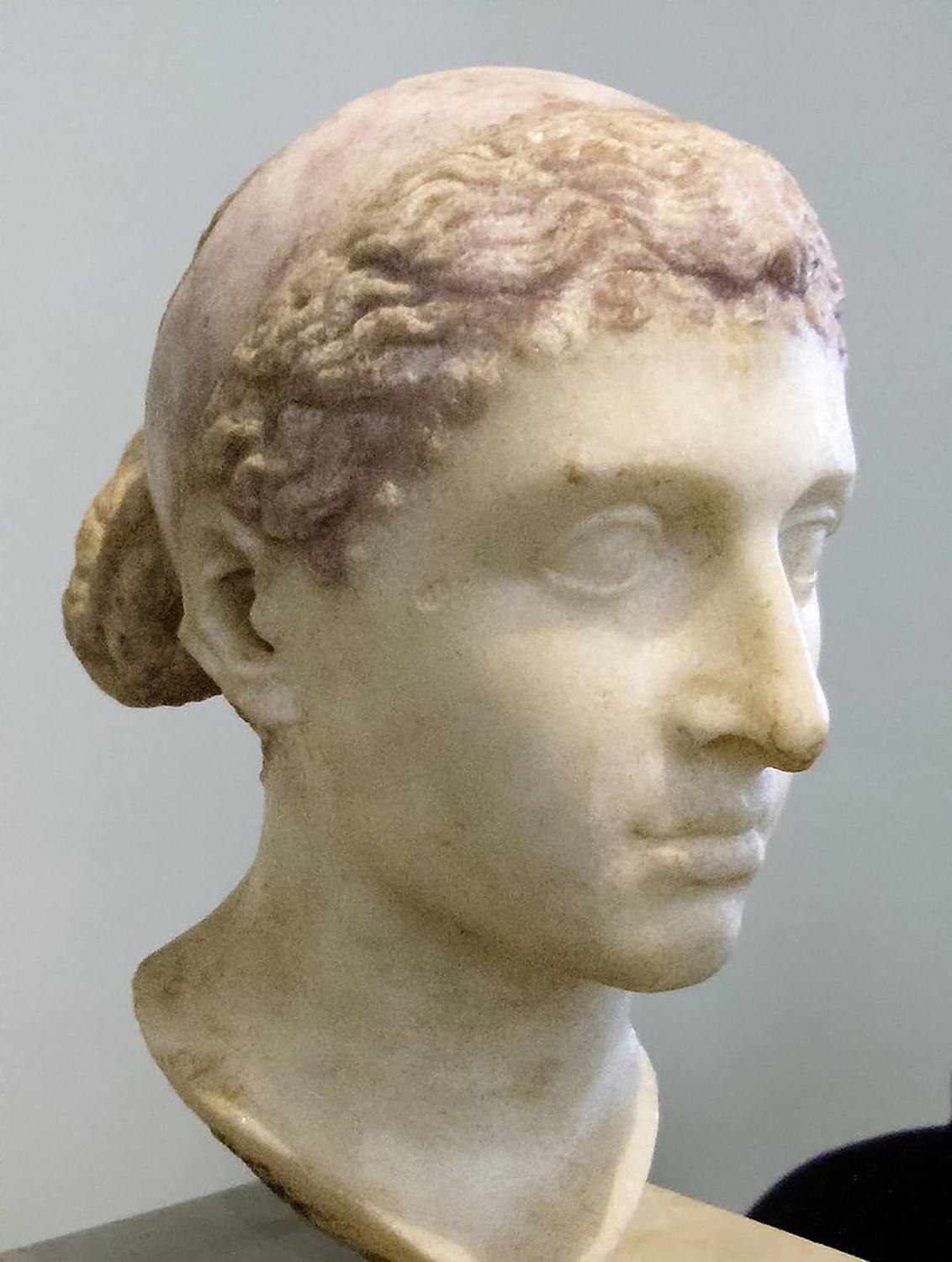 One thing is for sure - Cleopatra was seen as a true goddess.

People were calling her the new Isis, who was one of the most important goddesses of ancient Egypt. And this thoroughly explains how important Cleopatra was to her people.

But aside from comments that she was the Egyptian goddess of beauty Aphrodite, is there something that could confirm what did Cleopatra look like?

The Egyptian civilization was always ahead of time. But how accurate could be arts and crafts from those ancient times?

The Face Of Cleopatra was on coins 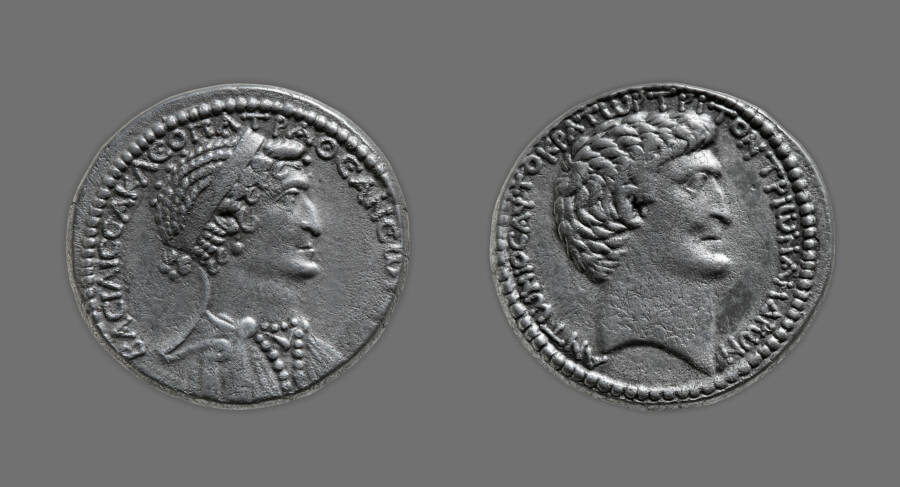 Instead of constantly asking, "what did Cleopatra look like," let's turn to some well-known facts.

Queen Cleopatra was a true beauty of her time. At least, that's what experts say about her. They describe her as an exotic beauty. She was a mesmerizing woman that won the hearts of everyone around her.

And did you know that ancient coins had the face of Cleopatra on them?

Indeed. There were three different groups of coins that had her face on them.

On all of these coins, Cleopatra was portrayed in profile. Her hair was tied in a low bun, and there was always a slight accent on her prominent nose.

Who knows, maybe this is the most reliable source that could answer our question of the day: what did Cleopatra look like? 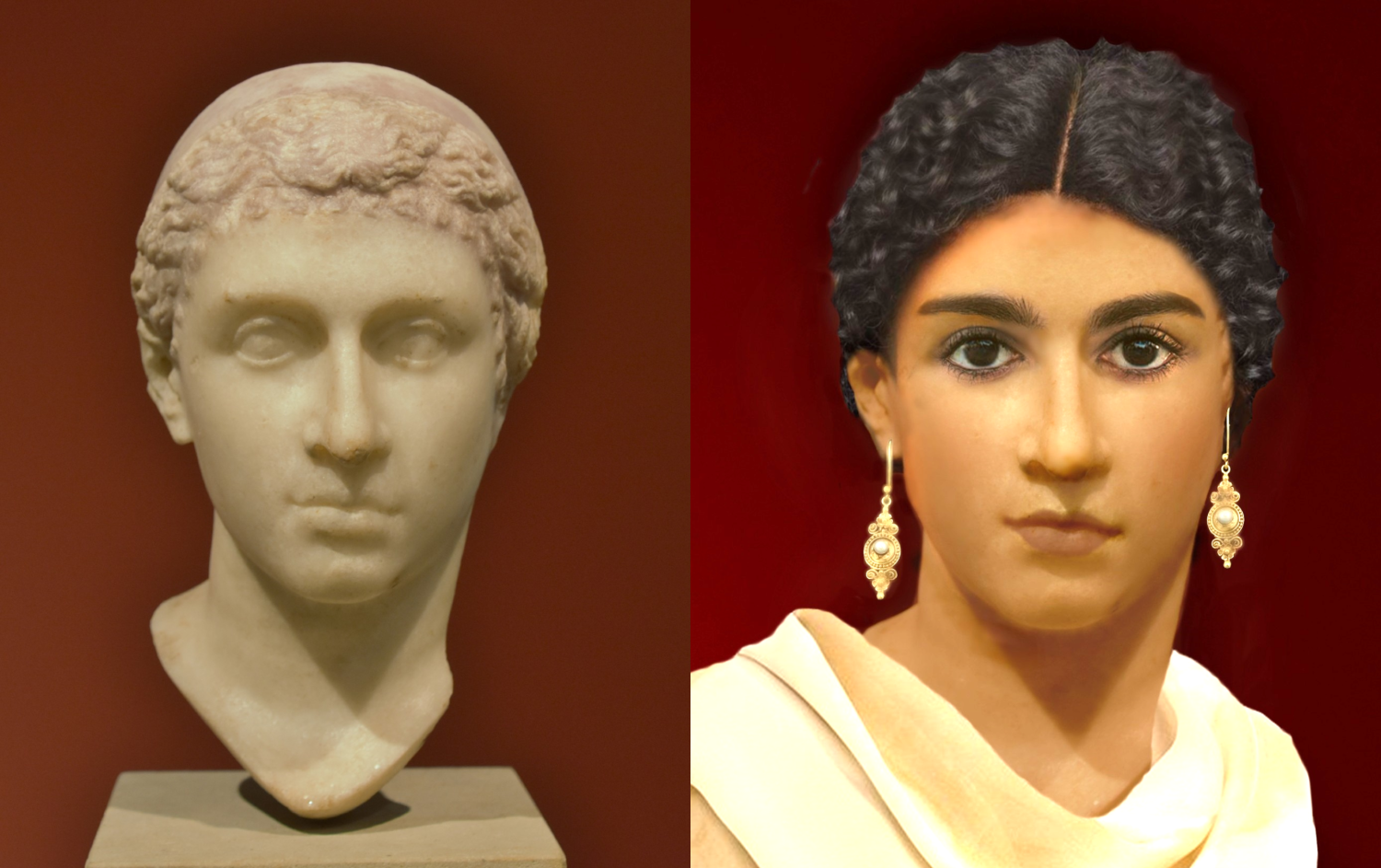 Since we have modern technology as one of our best friends these days, maybe Cleopatra's face could eventually see the light of the day. Or, we could finally see what her face looked like.

And instead of constantly asking ourselves or search engines, "what did Cleopatra look like," we would be able to see it for ourselves. 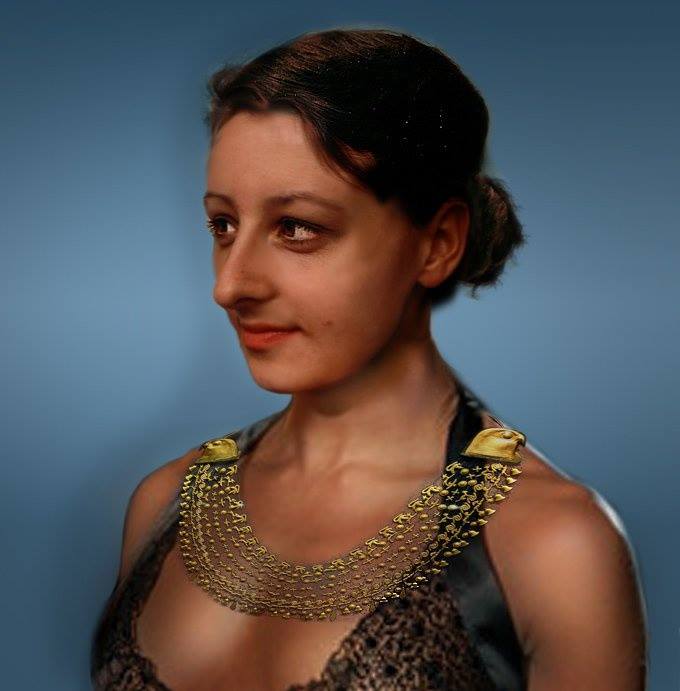 But is this possible, and most importantly - how accurate can this be? We cannot even say with certainty was Cleopatra black or white, as described in the popular culture. That's why answering the question of what did Cleopatra look like is not simple.

Are There Any Historically Accurate Paintings of What Did Cleopatra Look Like? 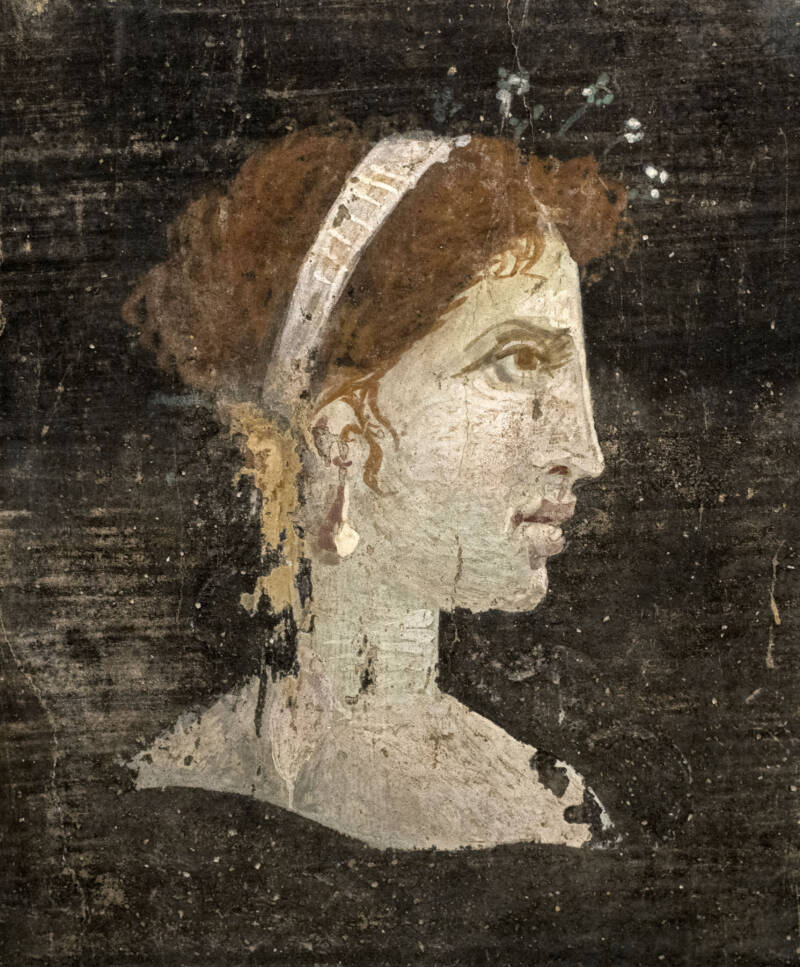 Besides coins, other sources too could help us picture Cleopatra's face in our minds.

Egyptians were a gifted civilization. Arts & crafts, sculpting statues, building pyramids, you name it, and they probably did it with their own hands.

Many ancient drawings portrayed Cleopatra's real face and answered our question of the day.

Well, yes and no.

While words always describe Cleopatra as a true beauty of her time, all pictures, statues, and numerous drawings show her as a woman with sturdy face features crowned with a Roman nose.

Was Cleopatra a true beauty, or all of these words were just bland words?

It will probably remain a great battle between words, pictures, and facts. But moreover, the reality that all beauty standards evolved is something that we can't change.

Who said that a beautiful woman should be size 4 and have poreless skin and lip fillers?

Apart from wanting to know what did Cleopatra look like, what about her kids? 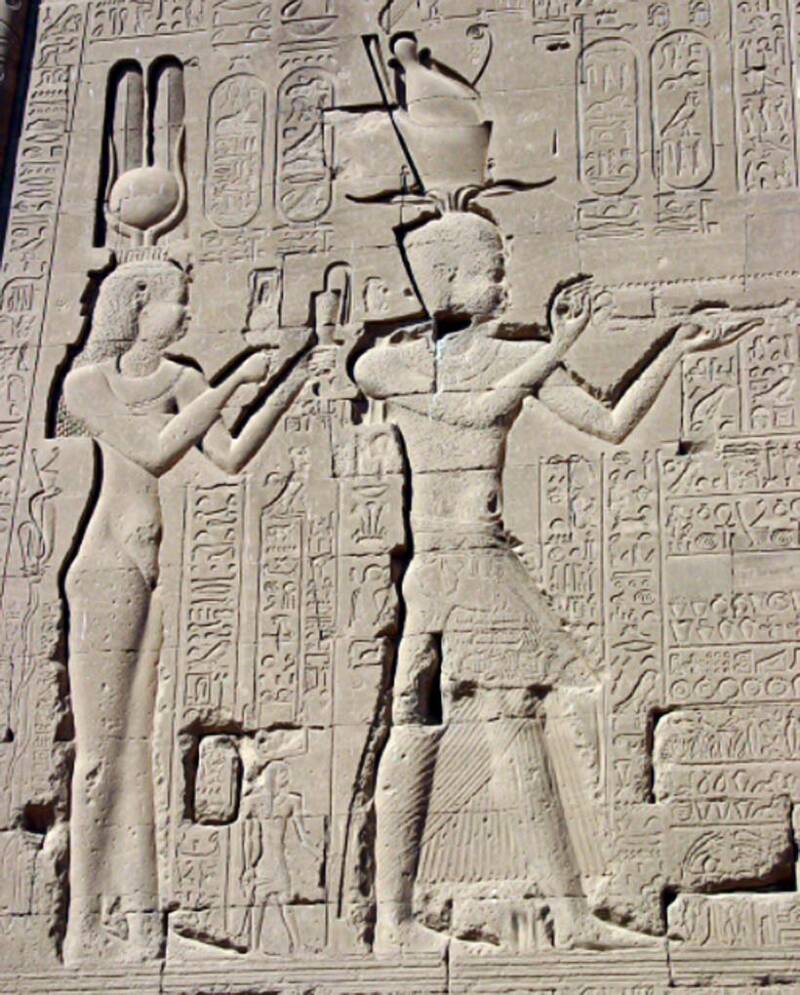 Besides weight and beauty, there is a massive drama over women and motherhood.

And people, as we know them, are much curious to find out whether a woman ever became a mother and had children than to give a round of applause for her accomplishments in career or life outside her family.

What is the purpose of a woman if she is not a mother?

Of course, all women need to do, is take care and bear and raise future heirs.

Cleopatra was a majestic and talented woman. She had a thing for writing and wrote a medical treatise with pharmacological works she researched. Fluent in several languages, fearless and intelligent, it was undoubtedly hard to picture a well-educated woman back in those times when patriarchy was still the most important and dominating thing.

But above all this, Cleopatra became a mother too. She had four children, but only one of them lived long enough to become an adult.

It is essential to mention that her firstborn child named Caesarion was Ceasar's. Her one true love and sworn nemesis.

Oh, but was Cleopatra married? How dare we forget the most important question of all?

All You Wanted To Know About Cleopatra's Spouse 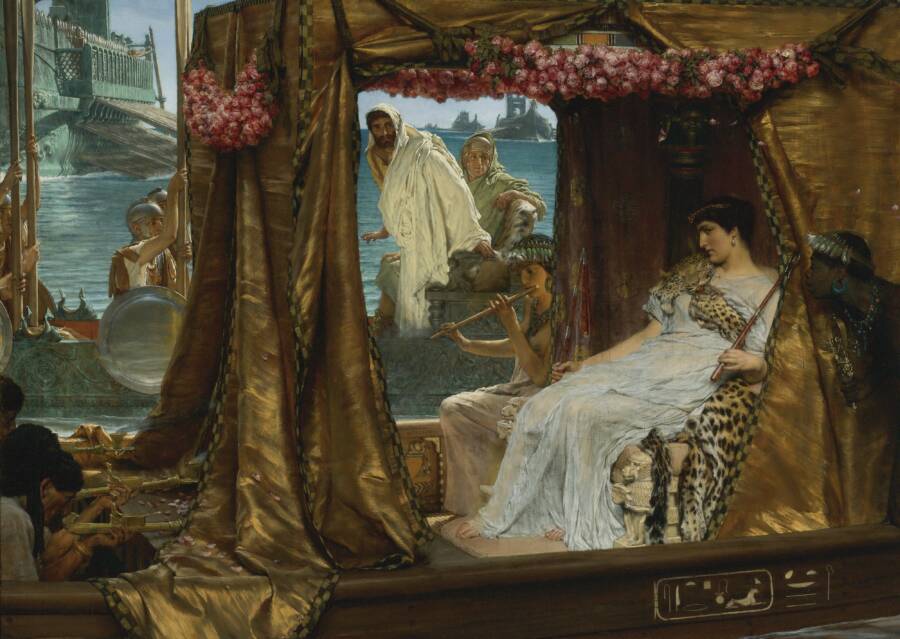 To be a single mother was one of the forbidden, sinful things for a woman.

If by any possibility we could go back in her time and see a woman that had a child out of wedlock, it is more than sure that we would be witnessing the most famous scene from Game of Thrones.

The one where Cersei walks down the street and some church aunties ring the bells behind her calling her names and yelling: "Shame! Shame! Shame!"

Yes, you would be a shame for your family, a national catastrophe, a misfit, or even the one with the W-word.

But can you imagine the strong Cleopatra married next to a man who would be as powerful as her?

At some point, Cleopatra was in love with Ceasar, and she became his mistress. Many say that he was her one true love, but also, there is the possibility that she did all that charade for the crown and political purposes.

However, the love affair Cleopatra had with Mark Antony transformed into marriage at some point. She needed someone reliable like him by her side, which sounds too sweet even today.

Every strong woman needs a man she can count on. We are independent and strong enough to be by ourselves, but the company of a loved one could never hurt.

They had three children together, and let's end their story here before the fairytale loses its sparkle.

How Did Cleopatra Die? - The Mystery Behind Cleopatra's Death

There are many, many theories about Cleopatra's death.

Some are more dramatic than others, but all describe and depict the ancient society of promising conspirators. We still have these specimen among us, of course. And they are like that one unique spice that makes the taste of the meal pop.

The question that follows, "what did Cleopatra look like?" is undoubtedly the one when people are wondering how she died.

A theory says that she died of a snake bite when the venom of a cobra or an asp started flowing through her bloodstream.

Others say that the curse of suicide followed Cleopatra too. She took her own life when all of this started to feel like too much.

The truth, however, will remain a total mystery to every one of us, just like what did Cleopatra look like.