A waitress quits her job, then posts her payslips online to prove bosses took more than $970 of her tips.

When you leave a tip for a waiter or waitress, do you ever think about where that money ends up? A waitress has recently revealed that her boss cheated her out of that tip. And she has proof.

Emma Smith was employed for five months at Albert's restaurant in Didsbury, Greater Manchester, before quitting the job over tip row.

Taking to Facebook, Emma shared a selection of her payslips, which she insists show hundreds of dollars deducted from her tips.

"Albert's unfairly take tips off their staff to line the owner's pockets."

"If you're happy that the majority of your card tips go direct to the company, then continue to do so. I just thought everyone should be aware of this."

"The only tips we actually get are cash."

Emma also claimed the restaurant did not give it's staff tips paid via credit cards.

However, it would charge them for making minor mistakes and even fine them if they were late clearing tables.

"I have just left this company as 70% of the card tips and 10% service charges go directly to the owners and are used to pay the salaried staff their wages."

"At the end of every night, Albert's take a percentage of our sales off us."

"Whether we have actually made the tips or not, they take a cut of everything we have sold from us that day. So theoretically, we could end up paying out of our own pocket."

"Then every fortnight, we get a cheque showing us how much money we have made on card tips, and then it shows the massive reduction that goes to 'Albert's house' and the disheartening figure that we are actually coming away with."

"Some cheques can be in minus figures if we haven't made enough, and so we then owe the company money." 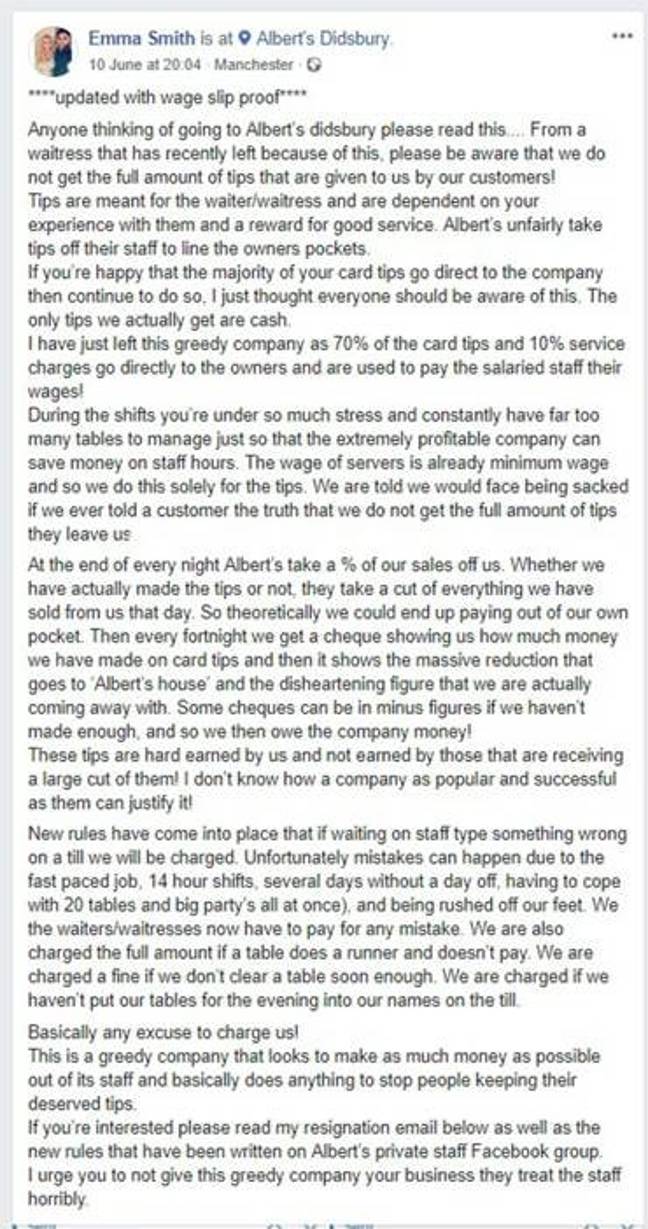 Alongside her resignation email, the customer service manager also shared her payslips. 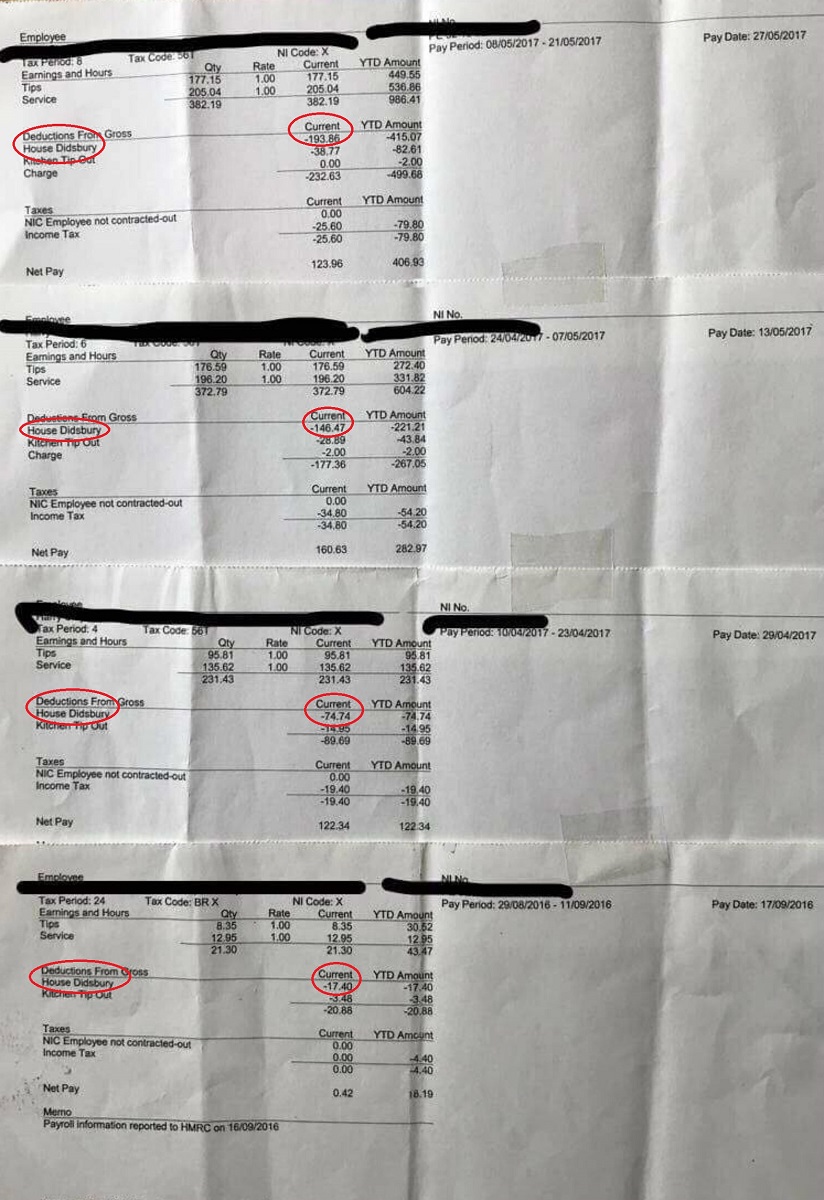 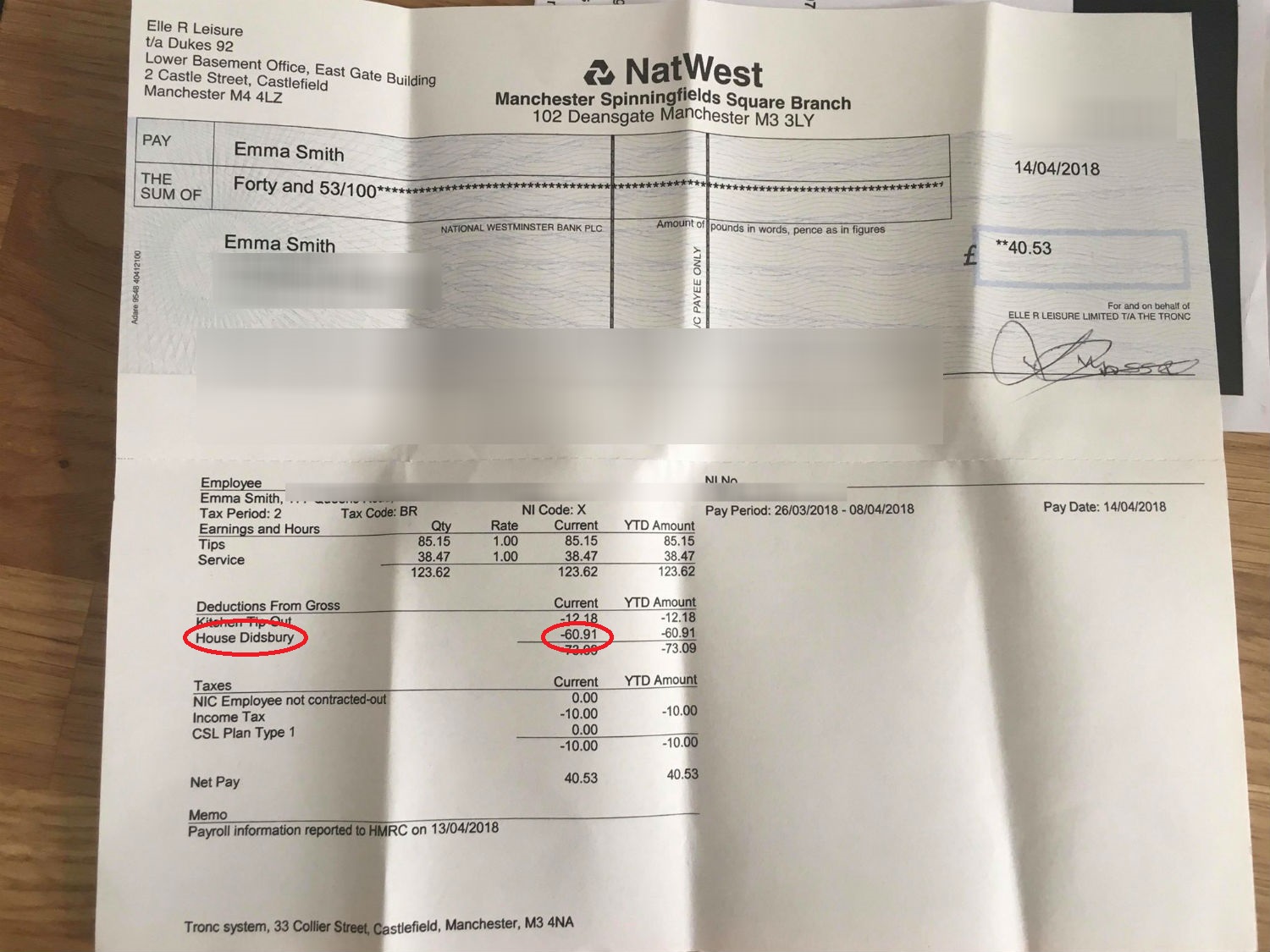 After sharing the payslips online, Emma's post caused a storm on social media, with angry netizens shaming her former employer.

Another member of staff, who wished to remain anonymous, also posted his pay slips.

After her post went viral, Emma said in an interview:

"It was horrible, I was only working there part-time to top up my full-time job, and I was exhausted."

"I would go home crying to my family and be complaining about it. I just decided enough was enough."

And one commenter said:

"I'm pretty sure this kind of s*** is actually illegal. All businesses have losses. It's usually tax-deductible. They cannot hold the staff accountable for that. It's the nature of business."

"What a joke. I'm certainly never going there again." 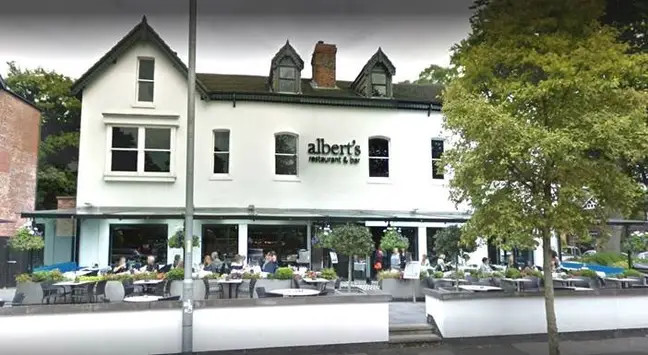 "I cannot comment on specific allegations as that is now a legal matter."

"However, more than 90% of tips earned go to staff on site."

"Very occasionally, we have asked staff to contribute towards mistakes made, but this has only amounted, in total, to about $235 (£170) in the last 12 months."

"Again, this system is in place to ensure good service."

"If a server makes persistent errors, it can massively affect service, not just to the table in question, but the whole restaurant."

"However, this rarely happens and is at the discretion of the manager."

The representative also said that some restaurant staff has a 10 percent service charge added to their tips. And the company often retains that money and uses it to pay for 'staff welfare items.'