The NYPD has released shocking footage of a teen's execution-style slaying outside 1705 Hoe Avenue in the Crotona neighborhood of the Bronx.

Detectives released the surveillance video to generate tips that would help identify the killer and his accomplice.

The footage shows two men wearing black hoodies and white face masks engaging with a group of teenagers across the street. 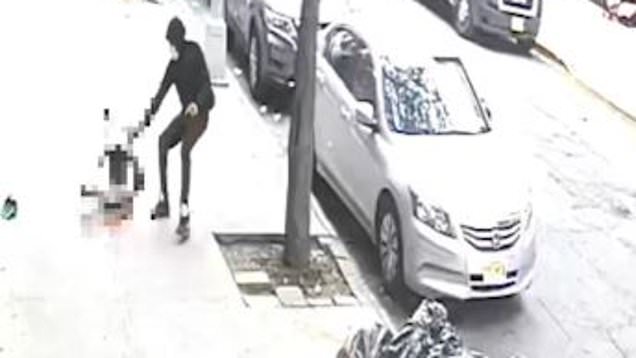 It's unclear what the argument was all about, but one of the teens approaches the men.

Then, the group of teenagers begins to desperately flee the area at the apparent start of gunfire.

A few of the teens manage to escape. However, Werts got caught between two vehicles as one gunman followed him.

The teen then tripped to the ground and attempted to crawl away.

The gunman stood beside Wetts, aimed his gun, and shoot the teen in the head at point-blank range.

The additional video showed a man, who authorities believe to be an accomplice, walking down Southern Boulevard shortly after the shooting.

The man was wearing a white face mask, a black hoodie and sneakers.

A witness, who didn't give her name, said:

"There were two shots, and when I came out, he was lying on the sidewalk in front of the doorway."

"EMT and cops then arrived immediately. They were working on him, trying to bring him back. But it didn't look good."

The officers then rushed Wetts to St. Barnabas Hospital, where doctors pronounced him dead.

He sustained gunshot wounds to his head and feet, according to the New York Post.

Wetts' mother, Jeanette Speruell Werts, told News 12 Bronx her son was with friends at the time.

"They didn't know what was going on."

"They said they had to move off the block and the next thing they shot my son in the head."

"I'm just devastated. I never thought I would be burying my son. I didn't want that to ever happen."

"I'm by myself now. That's all I have. My other kids are grown. He's my baby. Now I don't have my baby here with me."

A neighbor, who also wouldn't give her name because she feared retaliation, said:

"Wetts was a good kid who loved his mother. He was soft like a teddy bear."

"I didn't expect this to happen to him."