As adults, we get familiar with the fact how all actions have their consequences.

But sometimes, it's too late to offer a helping hand. The damage shrinks like a bloodstain and takes a colossal scale.

In the end, these things often result in innocent souls getting hurt.

This is a story that depicts all of the words written above.

In a previous statement, authorities reported that on January 5, a baby girl was born in the bathtub of her home in the Village of Albany.

A couple of days later, on January 9, the maternal grandfather contacted the police, sharing disturbing news.

The Horrible Turn Of Events

The grandpa informed them that his daughter had given birth a few days ago. And that the baby's father, the 16-year-old Logan T. Kruckenberg-Anderson, took the baby and hadn't been seen since.

The authorities located Kruckenberg-Anderson, but he told the investigators that he gave the child to a friend named Tyler.

On January 10, authorities located the baby. Unfortunately, the baby girl was already deceased.

According to the criminal complaint, Logan has been charged with first-degree intentional homicide and hiding a corpse.

He couldn't give investigators Tyler's address, nor a phone number.

Court documents state that he paid the friend $60 to take the baby to an adoption agency too.

Logan also added how they met through Snapchat, and their main communication ran there.

The teen admitted he met Tyler in a park and handed him the money.

He wasn't familiar with the name of the adoption agency that Tyler took the baby to, and later, he added that Tyler had not communicated with him at all after taking the newborn away.

Meanwhile, investigators put pressure on him and discovered something else.

The suspect finally admitted that no one named Tyler took the baby and that he made up the whole story to protect himself.

The criminal complaint states that Kruckenberg-Anderson revealed how he and the baby's mother made an agreement.

They were aware of the situation that they are unable to care for the infant. And for this reason, Logan made plans to get rid of the infant himself.

The suspect allegedly said he took the baby, who wasn't wearing any clothes at the time, and hid her inside a fallen tree before covering her body with snow.

But there was something that he didn't admit to the investigators.

He didn't mention anything about the baby being shot.

Instead, he only admitted that he left the baby in the tree, knowing that she would freeze to death, adding that he fell to his knees and started crying when he heard the infant cry.

Kruckenberg-Anderson directed authorities to the infant on January 10.

The autopsy results revealed that the baby had been shot in the head. When the evidence was more than obvious, Logan finally admitted that he shot the infant twice.

The baby's mother told the police that they had named the baby Harper. She described her with black hair and blue eyes.

The mother also said that Logan told her he would deliver the infant to Tyler, who would later take the baby to an adoption agency in Madison.

She also shared how their previous plan was to drop the baby off at a fire station. 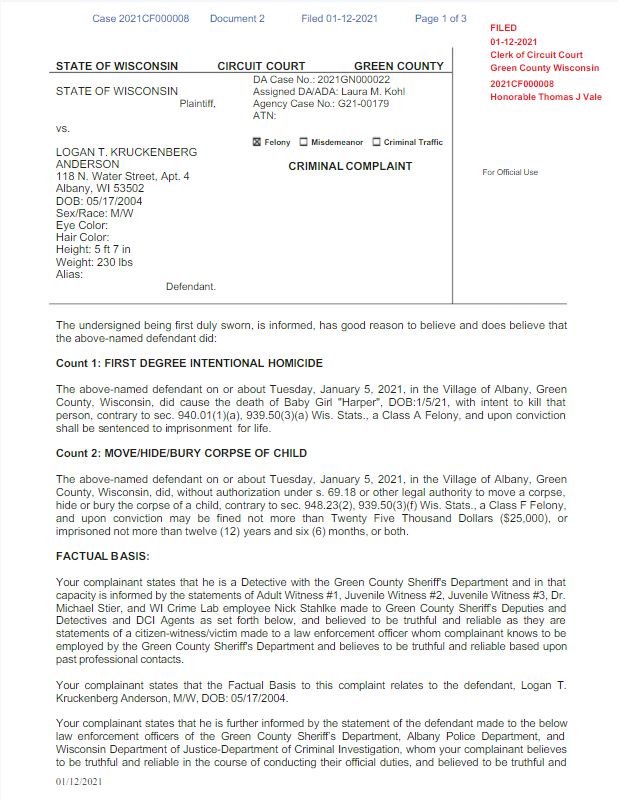 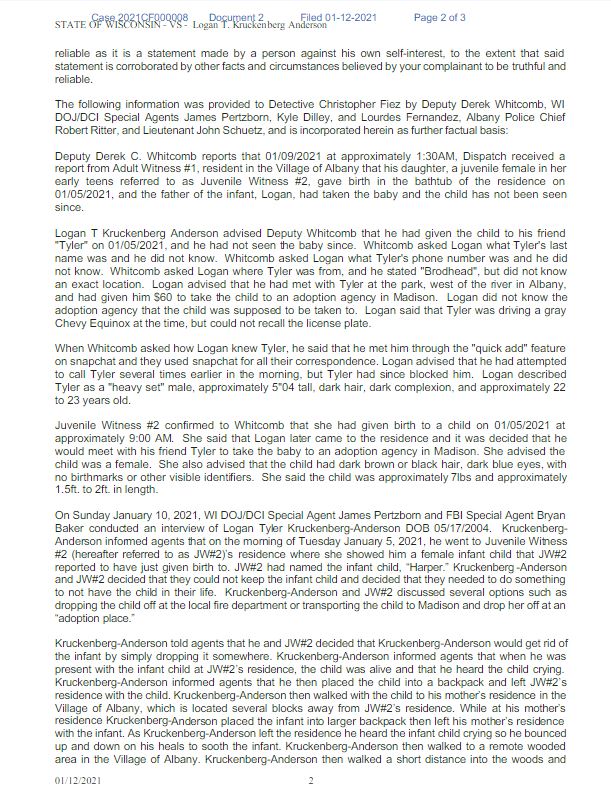 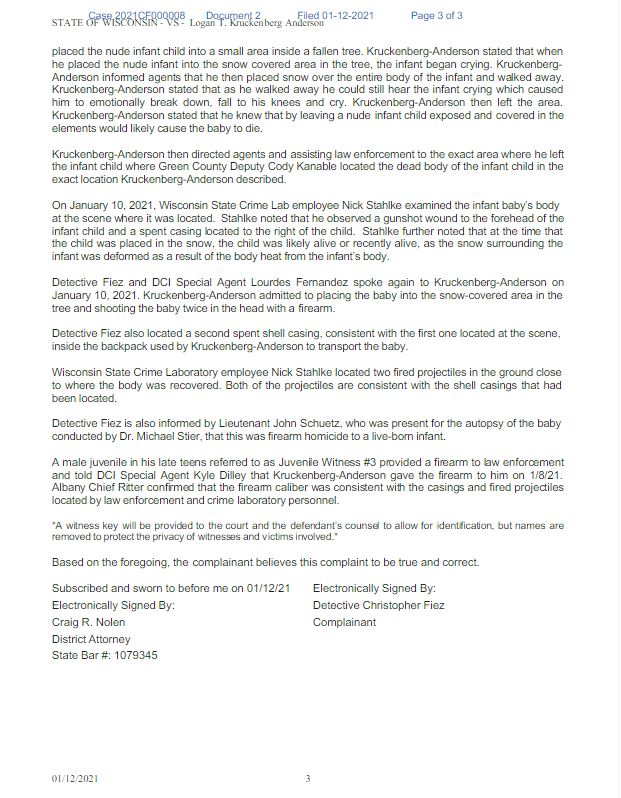 The young dad admitted that the baby was alive and crying when he left her in the fallen tree.

Another young man told police that Kruckenberg-Anderson gave him a gun on January 8.

Albany Chief Ritter said that the gun caliber was consistent with the casings and fired projectiles located by law enforcement and crime laboratory personnel.

Logan T. Kruckenberg-Anderson is charged as an adult in Green County Circuit Court, despite his attorney's request that he should be tried as a juvenile.