A road rage driver pulls a man out of his car and viciously beats him because he made the 'winker' sign at him.

Horrifying dashcam footage shows the moment the furious driver jumps from his truck and then attacks a terrified motorist.

The reason for the road rage? Because the motorist made a 'rude gesture at him' after a near-miss at a roundabout. 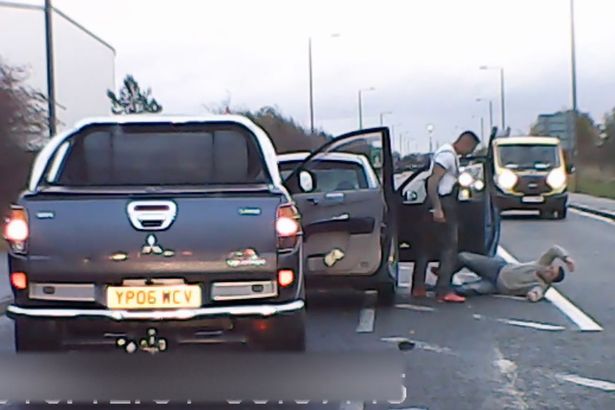 The fall-out began on a roundabout in Engine Lane, Barnsley, South Yorks, when the two drivers almost collided.

But instead of letting it go, hothead Stephen Carr tailgated his victim until he finally forced him to pull over.

Dashcam footage then shows Carr jumping out of his pickup truck before trying to drag the motorist onto the road. 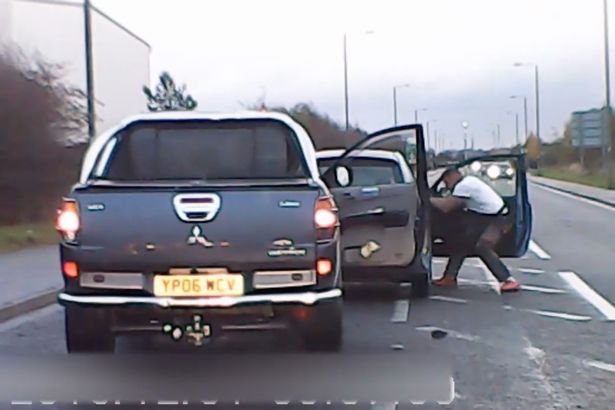 A woman then comes into view and approaches Carr. However, he screams at her, forcing him to back off.

Carr then returns and drags the victim out of his car by his leg before kicking and punching him while he's on the ground. 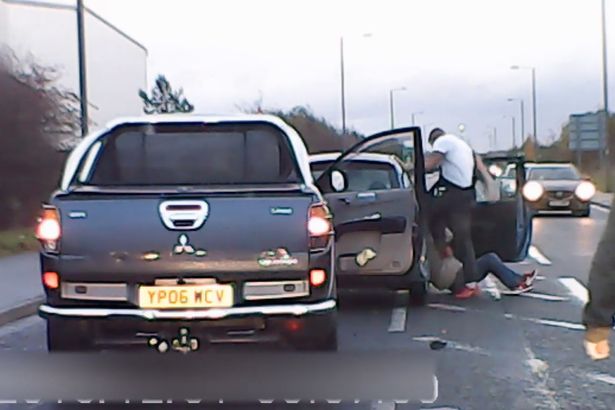 He continues to push him to the ground as dozens of other cars simply drive by while others just sat in traffic, watching the violence unfold.

The driver who recorded the footage said:

His victim had apparently given him the w***** signal as he went around a roundabout.

When we eventually caught up with him, we couldn't believe what happened.

This was, in my opinion, a totally unprovoked and sustained attack by an aggressive man who believes that he's above the law.

The driver added that his wife got out to stop the violence while he called the emergency services. However, everyone ignored her.

My wife was the only person initially to intervene and attempt to stop the assault.

Many more members of the public simply chose to slow down in order to rubberneck and then drive away.

Eventually, a roofing contractor decides to intervene and confronts Carr.

Police later arrested Carr and jailed him for 16 months.

According to police, the incident was one of the most troubling road rage attacks they had seen in recent years.

The man who recorded the footage and then handed it to the police concluded:

We were told that had it not been for the footage, he could have denied it.

I think it's time [people show] things like that. It's an example of my wife getting out of the car and everyone else just sitting in their little cocoons and driving past.

She was pleading with people to stop and help, and I think there is this inherent lack of public spirit.

There was a van behind us, and two guys in it were just stood there watching her plead for help.

It was infuriating for her. The level of anger was totally unwarranted.