The first day of school is usually never easy for anyone, especially for little pre-kindergarten children. Such kids are thrust into a new, unfamiliar, and scary world away from their parents' love, care, and attention.

The new place, new people, and new routine can be a lot to take in all at once. Not surprisingly, many kids get overwhelmed, which is what happened to Axel when he started pre-kindergarten in 2019 in Wisconsin.

Luckily for this kid, the bus driver stepped up and held his hand during this challenging event in his life. The driver's decision to take care of the little overwhelmed kid melted many hearts, and it should hopefully inspire others to do the same for such kids.

The Kid Started Crying When The Bus Door Opened

Axel's mother, Amy Johnson, wanted to remember her son's big day by taking a picture of the school bus. What she caught instead was her son's tearful face.

According to Amy, Axel was very excited to start school, but he got quiet when the bus came. When the bus stopped and opened the door, he burst into tears.

Amy did her best to reassure him and told him he would have so much fun in school, but that didn't help.

Isabel Lane, the bus driver, noticed what was going on. She directed the two to occupy a seat just behind her seat.

Axel would not let his mother go, and Lane held out her hand to reassure him. The little boy jumped at the offer:

"I stuck my hand behind the seat as maybe something else to grab onto and he grabbed my hand."

Amy took a photo of her son holding the bus driver's hand as she got off the bus. The picture ended up on the Augusta Police Department's Facebook page where it got more than 2.4 thousand likes.

"In our 2nd 'official' year in the school, we really need to shout out our school staff. This is one of our wonderful bus drivers, Miss Lane, holding the hand of a scared little one on his first day of school! The compassion we see every day in our teachers, bus drivers, custodians, administration, food service staff, and paraprofessionals is truly admirable. We are so fortunate to be able to partner with these people!"

The Bus Driver Got Lots Of Praise 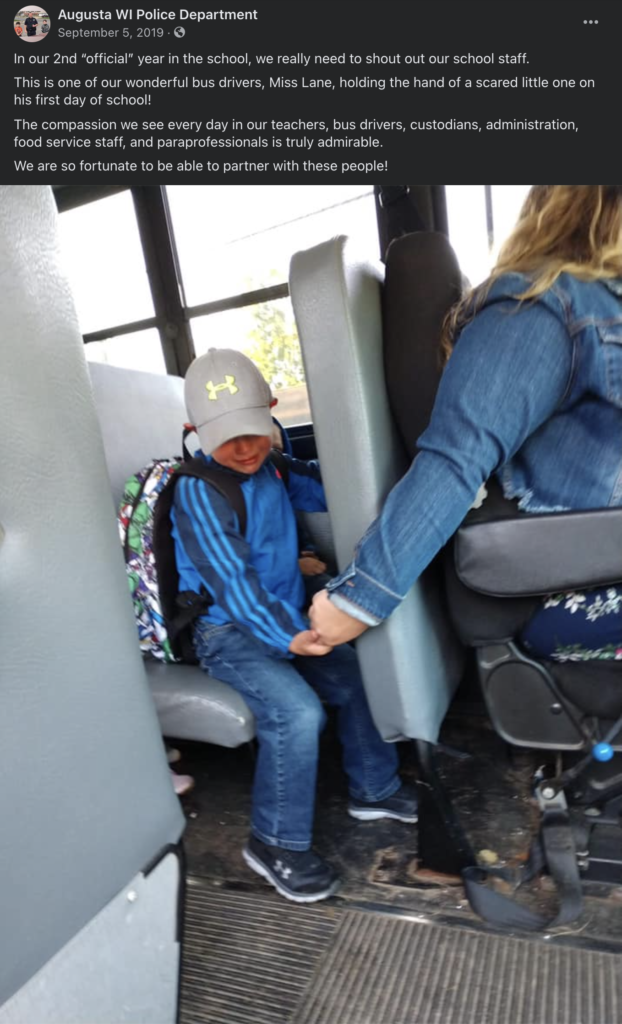 A lot of those commenting about the incident showed their appreciation for the bus driver. One of the commenters said that Miss Lane was one of those people that kids never forget all their lives.

This person went on to thank Lane for her love and compassion.

According to a different person, what Lane did was "so beautiful." This person's wish was that kids would cross paths with such angels whenever they need some support and their moms are not around:

"You make moms everywhere so happy that there are people like you out there!"

At the time Lane did this, she had been a bus for the Augusta School District for less than a year. Although she was surprised by the praise she got, she deserves the attention she got for her ability to work with kids.

Later, she said that she noticed that the kid needed some comfort, and what she offered was the best she could do at the time. Because of the kind driver's intervention, Axel had stopped crying by the time they got to school.

The district administrator of Augusta Area School District at the time, Ryan Nelson, noted that Lane was also serving as a special education aide in the school district. He pointed out that although she got a lot of attention for the photo of her holding Axel's hand, she shows the same kind of compassion to those she crosses paths with daily.

Since Lane lived in a small town, she knew many things about the kids she drove to and from school. One of the things she was passionate about was cheering the kids on every day she was on the job.

She considered it a big win when she got to tell the kids to make the day great as they get off the bus. When she encountered a kid who didn't like going to school, she tried her best to cheer them up.

Axel was one of such kids.

She later revealed that, on the following day, Axel waited for the bus by himself, and he was smiling and talking to her the whole time. Clearly, he had gotten over his fear and was doing much better.

Lane thinks that what she did applies to everyone struggling and could benefit from your help, even if all you have to do is reach out a hand to show you are there for them.

According to the driver, you don't have to say a word to help. Showing someone that you want the best for them could change their day for the better.