Three women have been put under arrest in Ohio for allegedly abusing many boys and girls sexually. In addition to the sexual abuse, the children were also filmed as the despicable crimes were being carried out on them.

Pictures of the molested children were also taken.

Some of the kids were just toddlers. According to police reports, some of the victims of these ruthless crimes were as young as 3 years old.

Additionally, although some of the kids were a little older, most were barely in their teens.

Additionally, the police need as much information as possible about the crimes to ensure all suspects are arrested.

The three women are all from Ohio. They were all charged with felony rape of the first degree.

But according to police, more charges are to follow.

On their Facebook page, the police say they have been working overtime to get as much information as they possibly can about the case.

The Scioto County Sheriff's Office is also working with other agencies. In particular, the office is collaborating with the FBI. 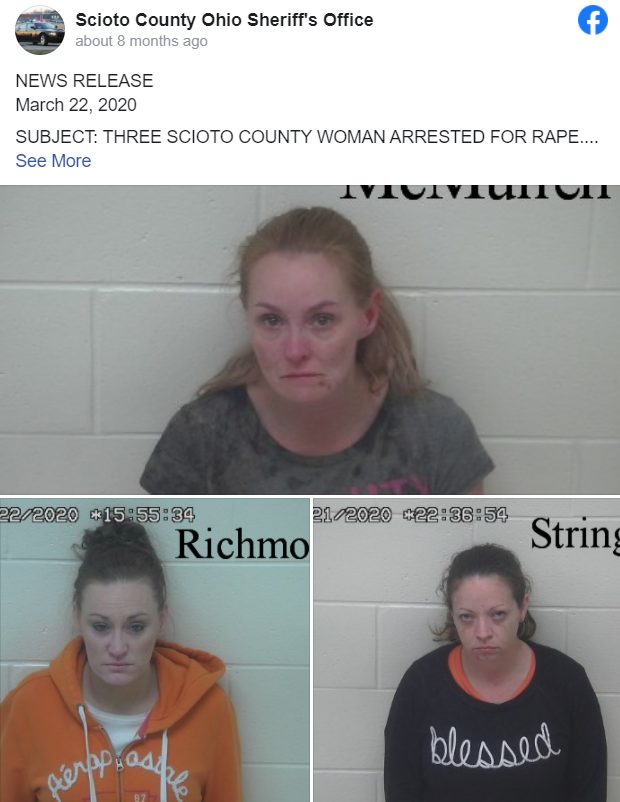 The goal is to ensure that all those involved in the abuse of these kids are brought to book.

The children the women molested were between the ages of 3 and 13 years. The kids have since been placed in a safe home.

According to police reports, the children were taken to Wheelersburg. While there, they were traded and abused.

The Scioto County Sheriff's Office posted a statement on Facebook about the arrests. They were also informing the public of the crimes the women had committed against the children.

"Detectives were able to obtain evidence that multiple children had been taken to a house in the Wheelersburg area by adults where they were traded for drugs and money. As a result, the children were sexually assaulted by several people that included being filmed and pictures being taken."

The police are yet to clarify how the three women are connected to their victims. According to their reports, investigations are still underway.

Furthermore, the police say that more charges are likely to be brought against the women and other potential perpetrators in the future.