He did it the first time round over a drunken bet, and he repeated the stunt a second time because a drinking buddy insisted that he had never landed a plane on the streets in the first place.

He managed the dangerous stunts while drunk. He also had no lights or radio to guide him.

Before he became famous as a daredevil pilot, Thomas Fitzpatrick still had an exciting life.

He was born in New York in 1930 on April 24, and after he grew up, he got into the U.S. Marine Corps during the Second World War in the Pacific.

Ever since he was young, he never showed much interest in conventional education, and he often skipped school to go and watch soldiers train at a nearby military training facility.

According to his brother, he lied about his age to join the Marines at the age of 15. There was a serious shortage of soldiers at the time, and Fitzpatrick saw this as an opportunity to serve his nation, even if that meant lying to get in.

Surprisingly, nobody realized how young he was. Otherwise, after his time in the Marines, Thomas Fitzpatrick was honorably discharged.

However, he decided to join the U.S. Army, and he served in the Korean War.

He was wounded during the war, and he got a Purple Heart for demonstrating extreme courage and bravery. Fitzpatrick was injured while trying to rescue soldiers trapped by Communist fire. He actually managed to save a few wounded soldiers.

Notably, before his discharge from the army, he had learned to fly a reconnaissance plane.

However, Thomas Fitzpatrick was not meant to have a quiet civilian life. According to a neighbor, the man had a crazy and wild side.

After leaving military life, Thomas Fitzpatrick developed an interest in flying. He got admitted into the Teterboro School of Aeronautics in New Jersey. At 26, he was already an airplane mechanic, and military life was already well behind him. 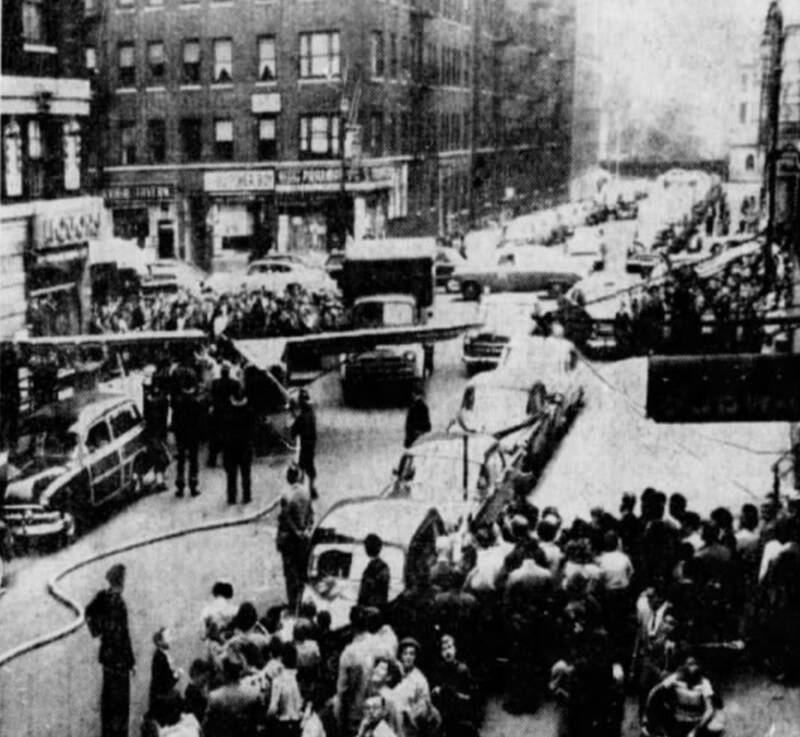 At around 3 a.m. on the morning of September 30, 1956, Thomas Fitzpatrick landed his first plane on the street. He taxied it close to Joe's Bar and jumped out to enjoy another drink.

People were baffled to find a red-white Cessna 140 plane on the streets. Many thought it would have taken incredibly flying skills to accomplish the feat. They would be even more surprised to learn that the man behind the incredible stunt had done it while drunk.

Interestingly, landing the plane on the street was not Fitzpatrick's initial plan.

On that day, Thomas had a couple of drinks, drove to his flying school, took one of their planes, and flew it to the bar he had been drinking at. He was hoping to land the plane in a field at George Washington High School. However, the place was too dark, and he settled for a precision landing at St. Nicholas Avenue close to 191st Street.

People were shocked to wake up and see a small plane parked in the streets.

It was later claimed that he had made a bet that he could be back from New Jersey in just 15 minutes.

After landing on the streets, the story was front-page news in the local papers. Some people were so surprised by the landing that they did not believe it was real. It seemed like the plane had been trucked there because the street seemed too narrow to allow the plane to land safely.

The reality is that although Thomas Fitzpatrick had done the impossible, he had also taken a substantial amount of risk. However, the media praised the landing and called it a "feat of aeronautics."

After all, the plane had to land in the middle of large buildings, cars, and street lights.

Even the police were impressed, and Sgt. Harold Behrens from the police aviation bureau claimed that the odds of this happening were about 100,000 to 1.

The police dismantled the plane and took it to a nearby police station. Thomas Fitzpatrick tried to lie that engine trouble had led to the unexpected landing, but authorities later confirmed nothing was wrong with the plane's engine.

Thomas Fitzpatrick Did It A Second Time 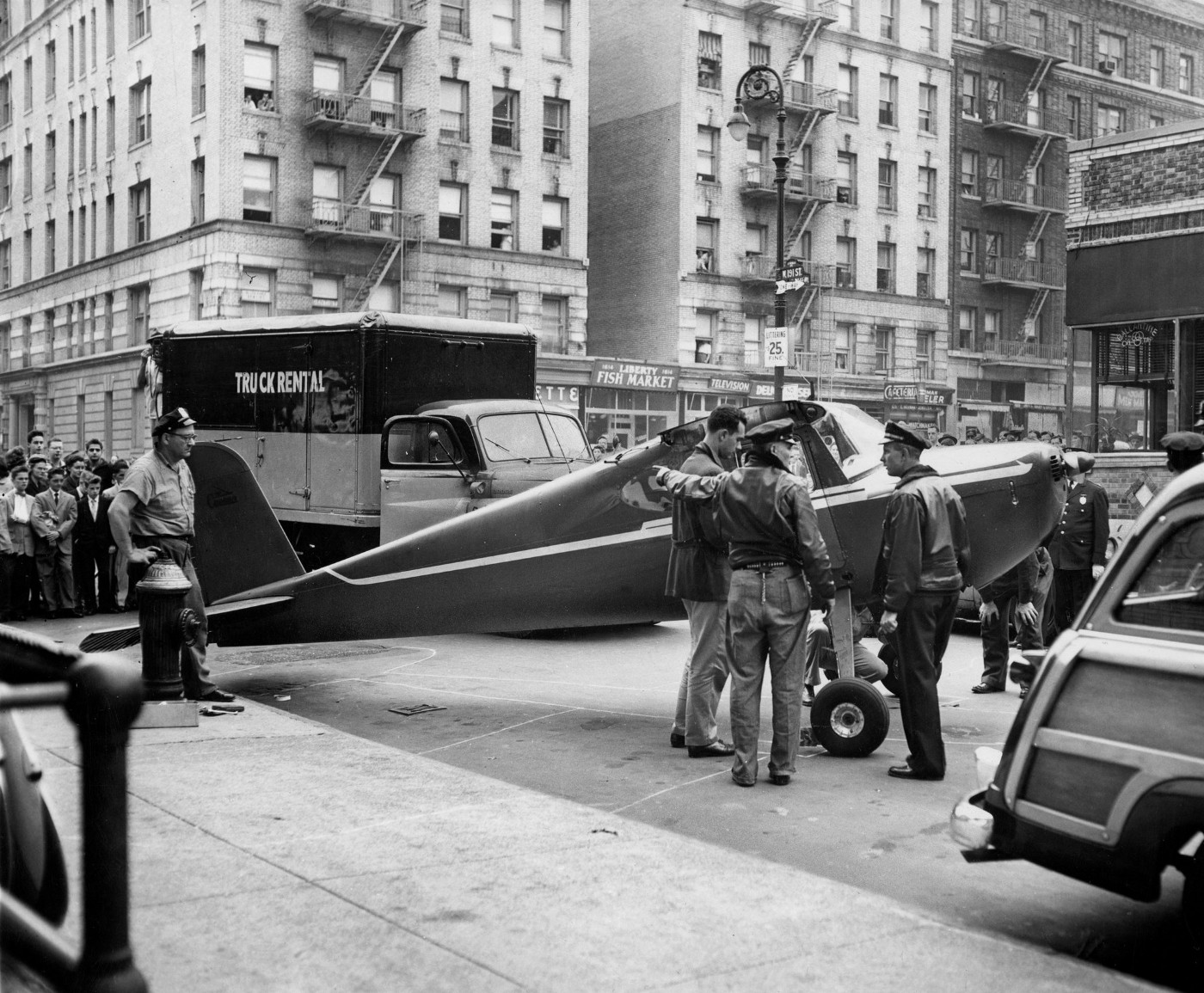 The second time Fitzpatrick landed a plane on New York streets, he tried to deny his involvement. However, many people had seen him do it.

At this point, he was already married to his girlfriend, Helen. They also moved from Manhattan to New Jersey, where he worked as a steamfitter.

He landed the plane on October 5, 1958, which was two years after the first landing. This time, the landing happened on a Manhattan street on Amsterdam Avenue near 187th Street.

This time, he did it because a Connecticut man would not be persuaded that Fitzpatrick had done it the first time. However, the fact that he was a bit drunk when the claim was made contributed to his willingness to attempt the stunt a second time.

Later on, when speaking to the media, he claimed that "the lousy drink" motivated him to do it.

This time, however, he was in a bit of trouble. His pilot's license had obviously been suspended after the first stunt, albeit for six months, and he had not renewed it.

He did not have a valid flying permit, and he even admitted that he did not want to fly again and only did it to prove a drinking buddy wrong.

In this case, he drove with his friend to Teterboro, and he took a single-engine plane he found on the tarmac.

Unlike the first time he did the stunt, many witnesses saw him land the plane. One of them was a local carpenter, who had to break his motorcycle suddenly to avoid a collision with the plane Fitzpatrick was landing.

Harvey Roffe also saw Thomas Fitzpatrick after he flew right over his parked bus. In fact, the driver dove to the floor out of fear that the plane would tear off the top of his bus.

As soon as he landed the plane a second time, Thomas Fitzpatrick immediately fled the scene. Later on, he turned himself in at the Wadsworth Ave police station and told them he "just happened to be in the neighborhood" when he was informed that the police wanted to have a chat with him.

Thomas Fitzpatrick Got Into Trouble Over The Stunts 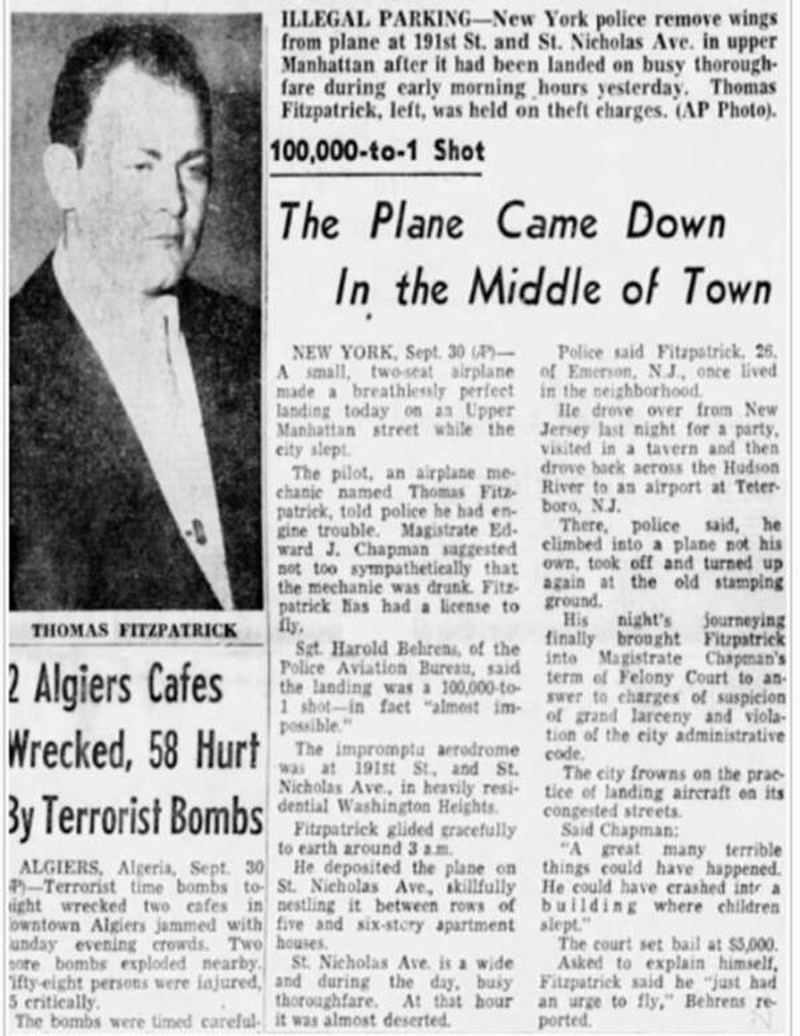 Although Fitzpatrick got a lot of notoriety for landing two planes perfectly on the street, he still had to pay for the drunken stunts. The police were impressed by his flying skills, but they also had to ensure he paid for his crimes.

The first landing got him charged with grand larceny and violation of administrative codes against landing planes on city streets. However, because the owner of the plane refused to press charges, the case was dropped, and he only had to pay a fine of $100.

His license was also suspended for six months.

Things were not as easy the second time he did it. The fact that he tried to flee the scene and deny that he had done the stunt probably didn't help his case.

According to a magistrate, Fitzpatrick came down like a marauder from the skies. This time, he was charged with grand larceny, unauthorized landing in city limits, dangerous and reckless operation of a plane, and flying without a license in violation of Civil Aeronautics Administration regulations.

He was facing real jail time this time, and Judge John A. Mullen gave him six months behind bars. The judge commented that if Thomas Fitzpatrick had been "properly jolted" the first time he landed a plane on the street, then he probably wouldn't have tried the dangerous stunt a second time.

In fact, the judge was so angry with Thomas for repeating his mistake that he threw a book in his direction, although he later apologized for it. In addition to the prison sentence, his pilot's license was suspended for life. The judge hoped that this would ensure that Thomas Fitzpatrick would never think of attempting the stunt ever again. 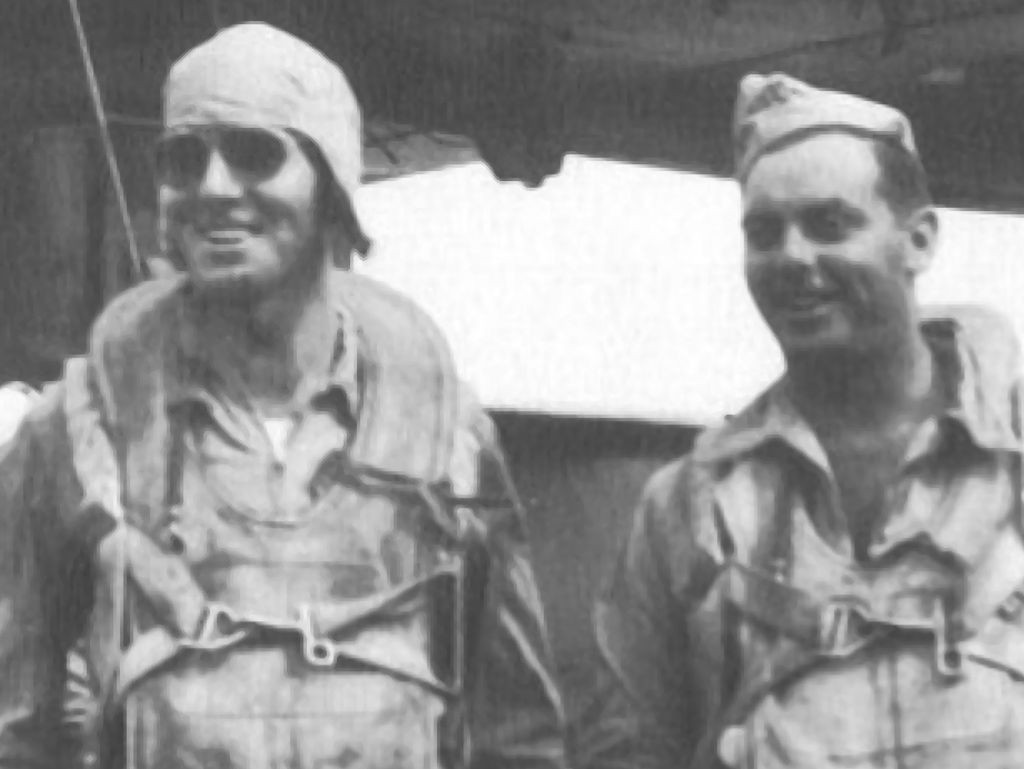 Although the landings got Thomas Fitzpatrick into trouble, most people were still more interested in his incredible flying skills. People understand that very few people can achieve what Fitzpatrick managed.

To this date, the daring stunts have not been matched. However, the aircraft that landed on the streets after the September 11 terrorist attacks came close.

After the incidents, Fitzpatrick got a job as a steamfitter. He did the job for 51 years.

During that time, he also settled down with his wife Helen, and together, they had three sons. He passed away at the age of 79 in the year 2009 after a bout of cancer.

Today, there is a drink named after him. It is called the "Late Night Flight," which is served in many bars in Manhattan.

If someone tried Thomas Fitzpatrick's stunt today, they would be in a lot of trouble. Charges would include the commission of an act of terrorism, which means the prison sentence would be considerably longer.