To be fair, kiss cams are not everyone's cup of tea. This young guy and his leading lady were not forced to kiss. At least that's what we know.

They merely discovered that they were being recorded, and his response is hilarious.

In the clip, the unknown duo is having a short moment together. They are kissing each other on the lips and smiling, with the man's arm around the woman.

The moment that changed everything

The tender encounter abruptly grinds to an instant halt as the woman taps her neighbor, and he pulls his arm off her and sits forward, looking straight ahead.

A camera broadcast the couple's display of affection during a football friendly between Barcelona de Guayaquil and Delfin in Ecuador. 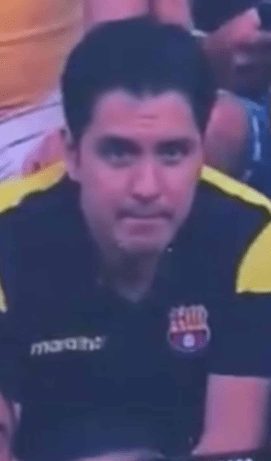 We don't know anything about the man or the woman sitting next to him. We also don't know if it was an official "kiss cam" segment during the game, though it's doubtful.

More likely, the camera just happened to cut to that particular section of the crowd at a particularly bad time.

Internet is full of theories

Either way, the awkwardness, and the young man's reaction are quite amusing. 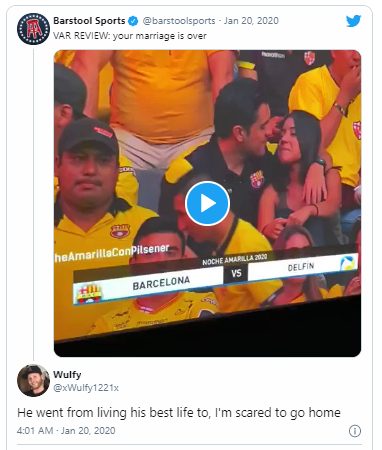 Some internet users say that the man was most likely caught with someone who's not officially his girlfriend or wife. In other words, he's a cheater.

Others seem to think that he simply had stage fright. Well, a camera fright, and didn't like the idea of being filmed.

There are also some who claim that the guy was not supposed to be there. Perhaps he skipped work? We truly have no idea!

VAR REVIEW: your marriage is over pic.twitter.com/ZvckwFjjSH

Even Barstool Sports have their theory, naming their report:

"Soccer Fan Has The Most Awkward Kiss With Someone Who Is Not His Wife, Immediately Realizes His Life Is Over"

Since we are still in the dark, we are giving this man a benefit of the doubt.

Some aren't fans of PDA, and that's okay. But, if you do get caught on camera, try to act natural. Or at least, don't make this face.

You be the judge. Or, simply watch the clip and enjoy!