One fascinating man has mastered the art of getting along with practically any animal he meets, and he has the adorable selfies to prove it. He has since earned the nickname "Animal Whisperer," but his real name is Allan Dixon.

The Irish man has been going worldwide, capturing rare photos of happy animals, including sea lions, kangaroos, elephants, camels, and practically any other animal you can imagine.

His mission started in 2015, and today, he has managed to create quite the collection of fun and adorable photos that have melted hearts all over the web.

Although he makes it seem like every animal in the world loves human company, Dixon admits that it's not that easy getting an animal to warm up to you. Apparently, he has to spend up to three hours with the animal before the perfect opportunity to take a great photo comes along.

Fortunately, there are times when he has to spend about five minutes with the animal to create enough rapport to take the perfect picture.

Today, we will get to experience Dixon's wonderful adventures through his photos. Each of his pictures offers an amazing insight into how well humans and animals can get along if we actually tried.

You will be thrilled with the smiles, the fun expressions, and the genuine happiness both parties enjoy.

1. This Quokka Is Telling Him A Funny Story 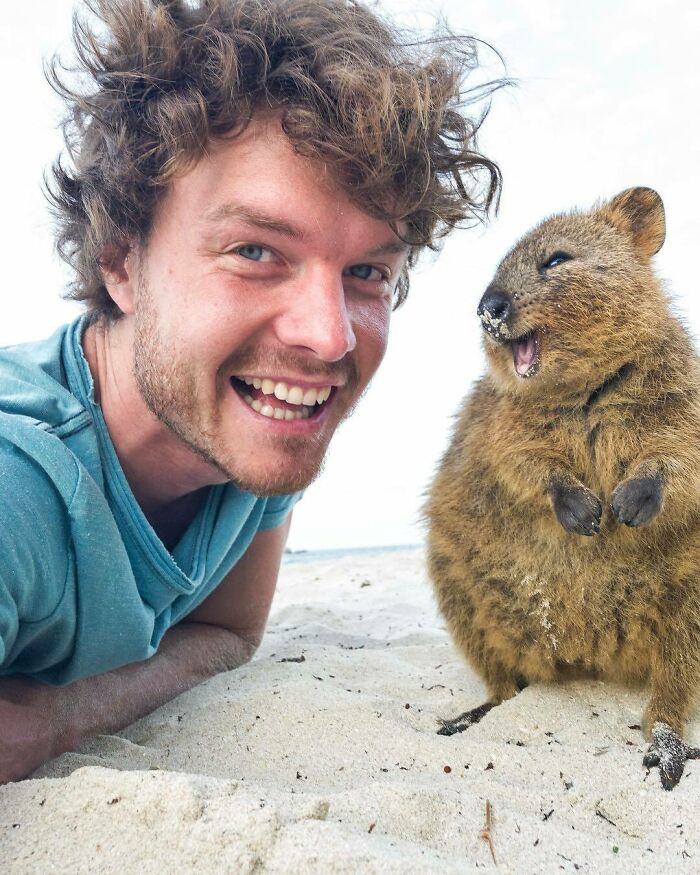 If this picture cannot make you smile, then you are pretty hopeless. With this picture, Dixon managed to get many people excited about wildlife and contribute more to their welfare.

Of course, the cute little animal also helped him launch his career.

2. Smiling For The Camera 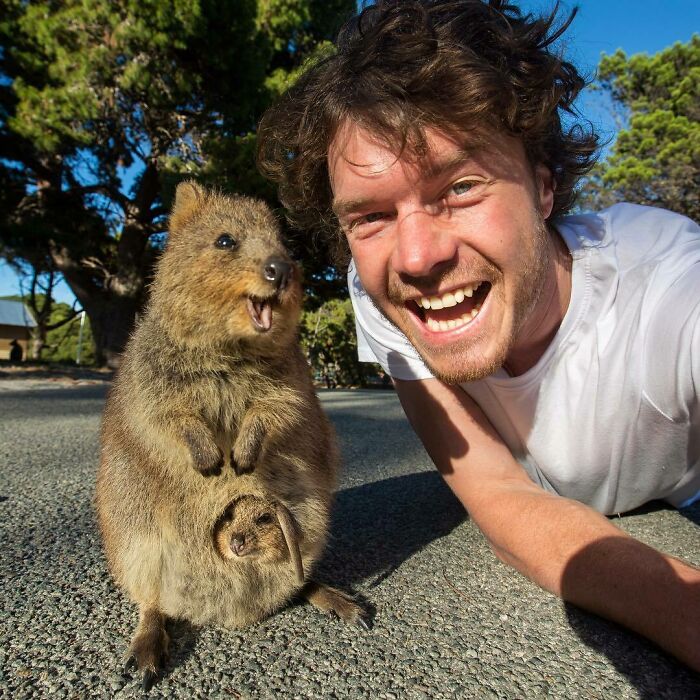 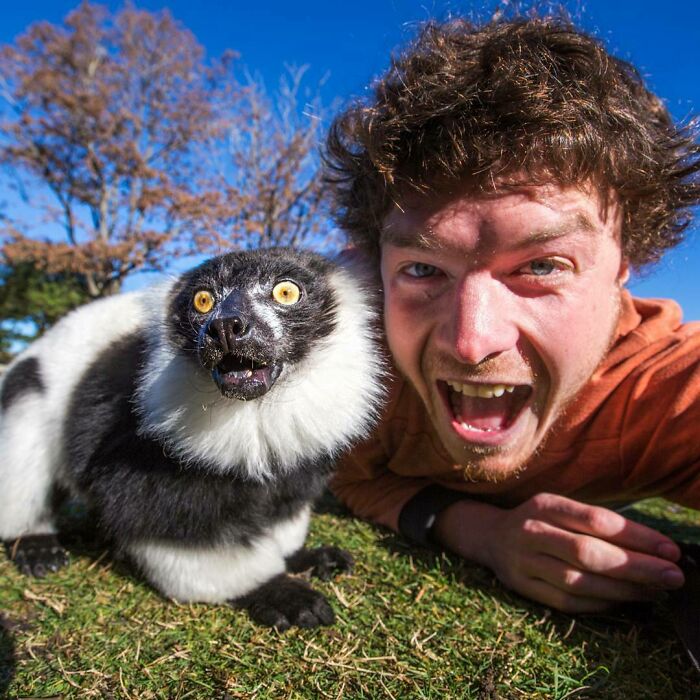 Here, it looks like he told the lemur some terrible news when they were just taking a selfie.

Dixon was willing to share some tips on what it takes to take these amazing photos. For him, it is not just about taking animal selfies.

Based on his pictures, people have adopted animals, talked about their welfare, and donated thousands to help their conservation. He also admitted that this has now become his life and currently "means everything" to him.

Because of his work, he feels that he is making a difference in the world.

Due to this activism, people message him expressing their desire to work with animals and help with conservation efforts. He likes to reassure them that anyone can do their bit to help, even if that means inspiring a single person to make a difference. 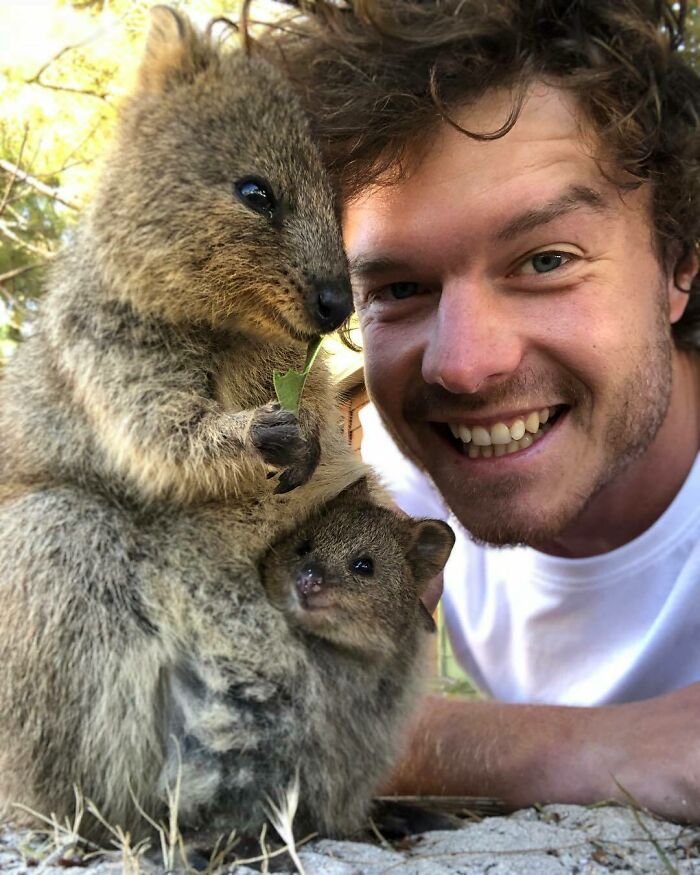 5. Meet Marty. Happy And Adorable Despite Everything 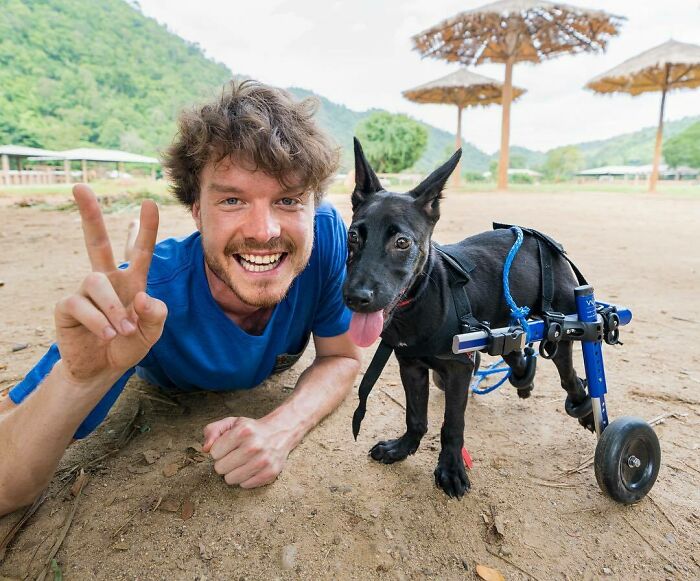 This dog is also in need of adoption. He lost his legs in a car accident, and luckily, he was not put down as they would in most countries.

Marty has another chance at life, and he clearly welcomes it with all the enthusiasm he can muster. 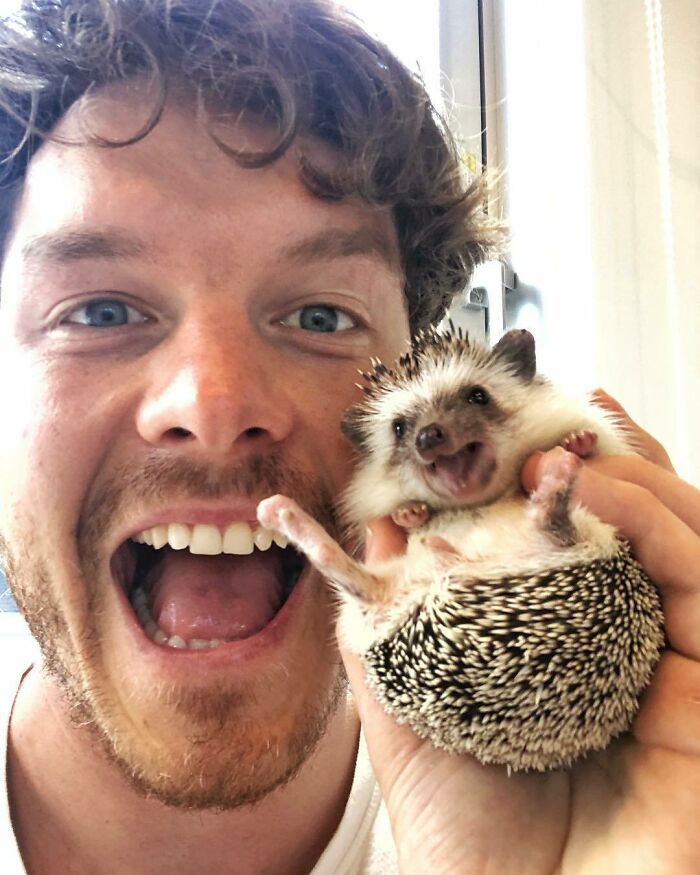 Dixon likes to remind people that even though there are many pictures of cute animals on the web, there are many animals out there in need of help. He claims that "animal content is the lifeblood of the internet, people love 'em."

That is because animals are lovely and cute. Unfortunately, very few of us are actually making a difference in their lives.

Those claiming they have no idea how to go about it can volunteer, participate in conversations about them, and donate their skills and financial resources.

He has a promise for all those who decide to take this important step: "you'll find so much enjoyment!" 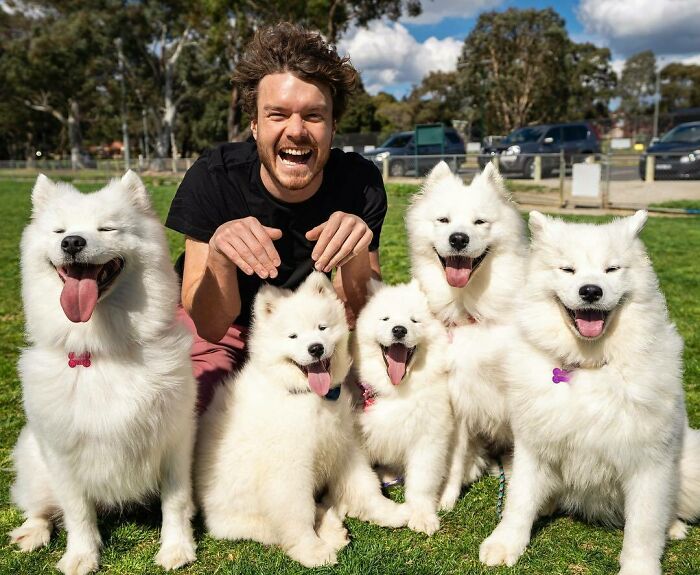 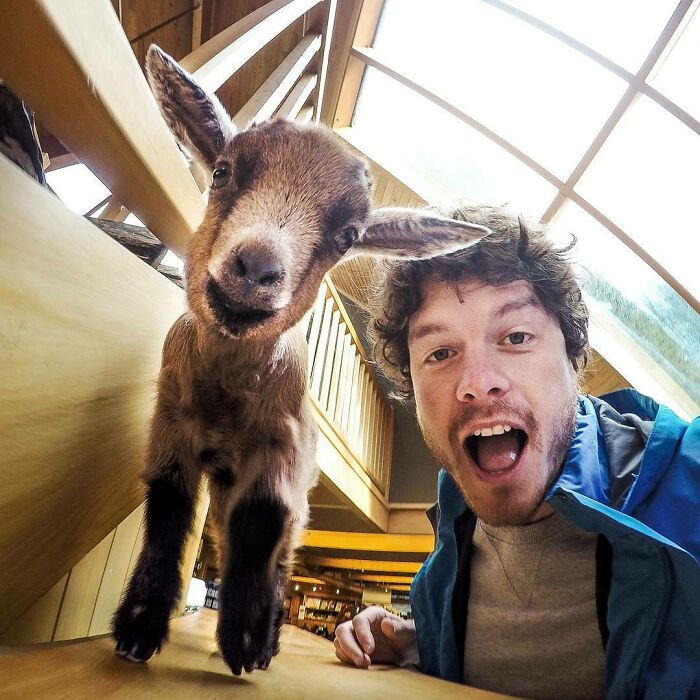 This cute little goat was orphaned after its mom was hit by a car. He still has the courage to hang out with people and make them smile at the reception of the Kiwi Birdlife Park in Queenstown. 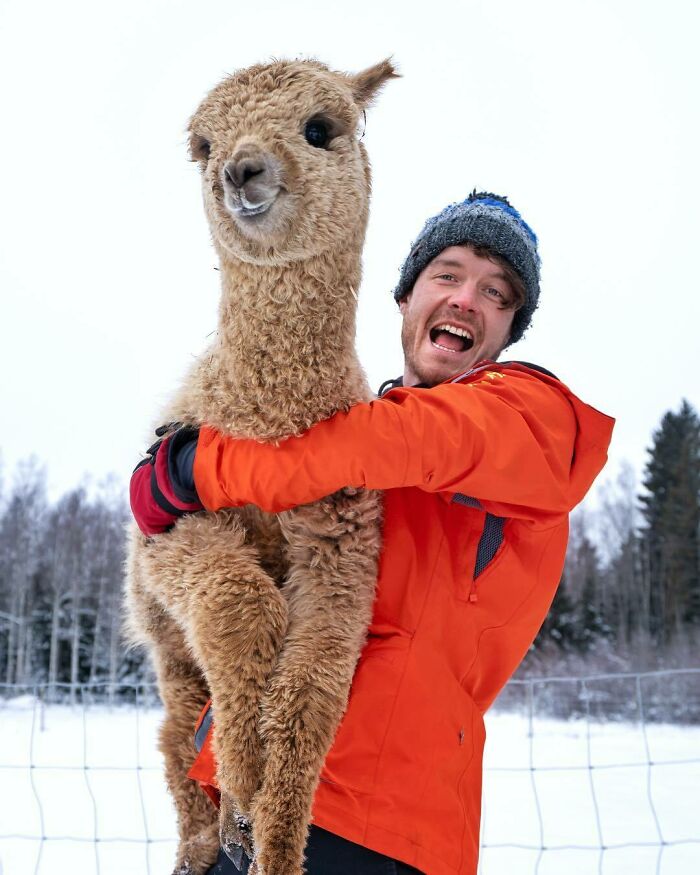 Hugging one of these is pretty much like hugging an adorable cloud. People can volunteer to help out at Alpaca farms all around the world.

Obviously, people were also interested in knowing how Dixon gets so close to these animals and takes photos with them.

For domesticated animals, he admits that some treats or food was involved.

However, he admits that this is not an exact science, as the treats or food can get the animal so excited that it can't be still enough for a precious photo moment.

Dixon loves animals so much that he is currently publishing a book on Quokkas, which is set to come out in early September 2021. The book will feature quokka selfies. 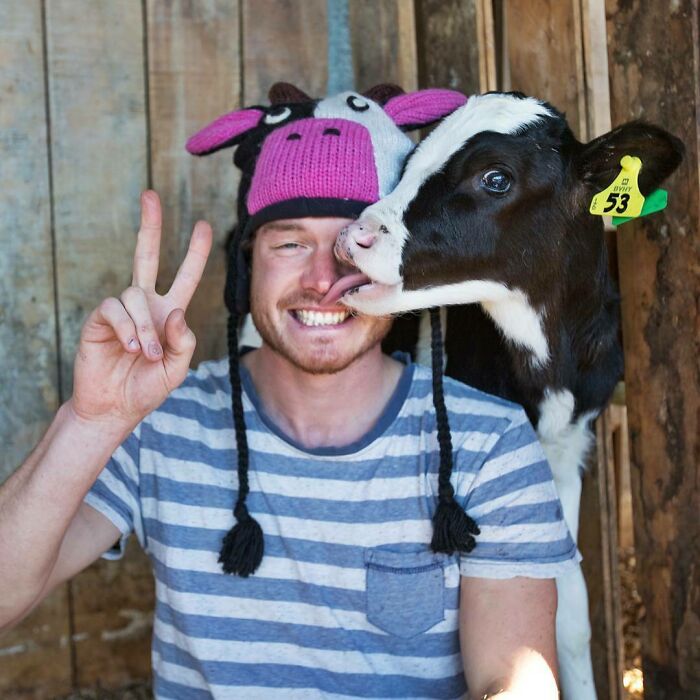 11. Getting Swimming Lessons From The Best 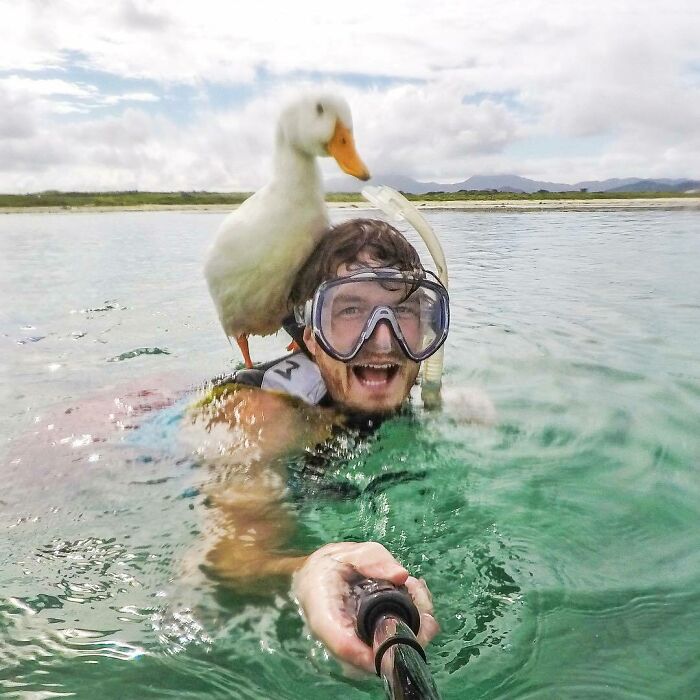 12. Competing To Get Their Selfies Taken 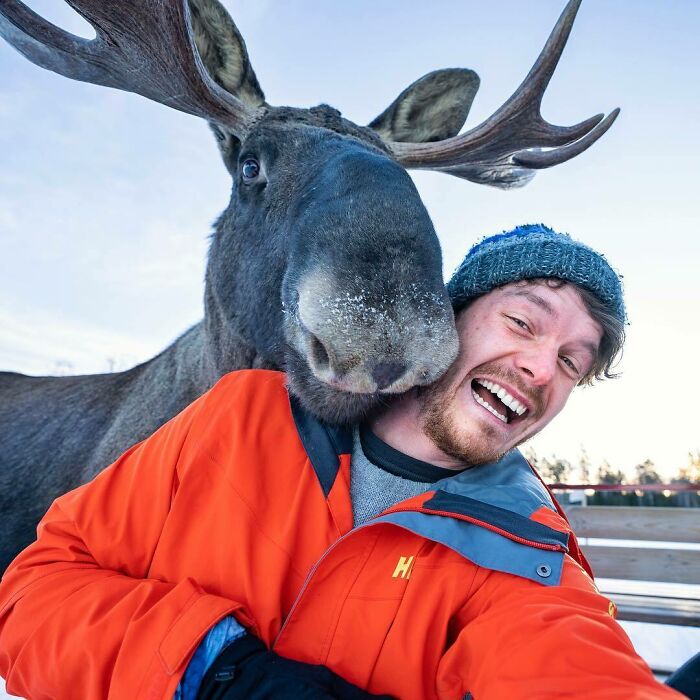 Dixon says he is surprised by the fact that people can hunt huge and beautiful creatures such as these just to get a "trophy."

However, the shaming of trophy hunters has helped reduce their hunting. Sharing cute photos of these animals is certainly a better way to use these animals to make yourself feel better.

Dixon is flipping the script by getting the kind of recognition and status trophy hunters seek by simply sharing cute photos in the company of these lovely creatures.

He has also been giving YouTube a lot of focus, and he admits to having been messed up by the traveling restrictions that the Covid-19 pandemic has brought about.

He plans to start a project that will "bring wildlife to the mainstream." 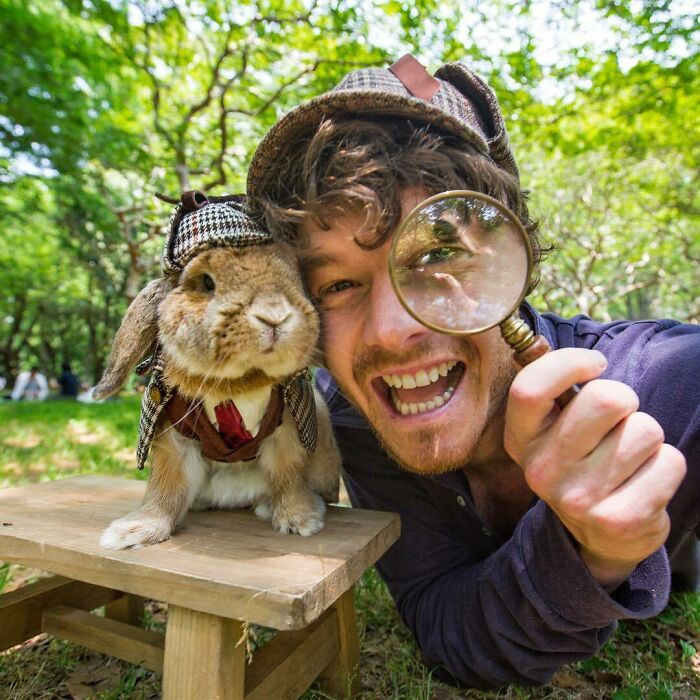 14. The Joy That Comes After A Healthy Mud Bath 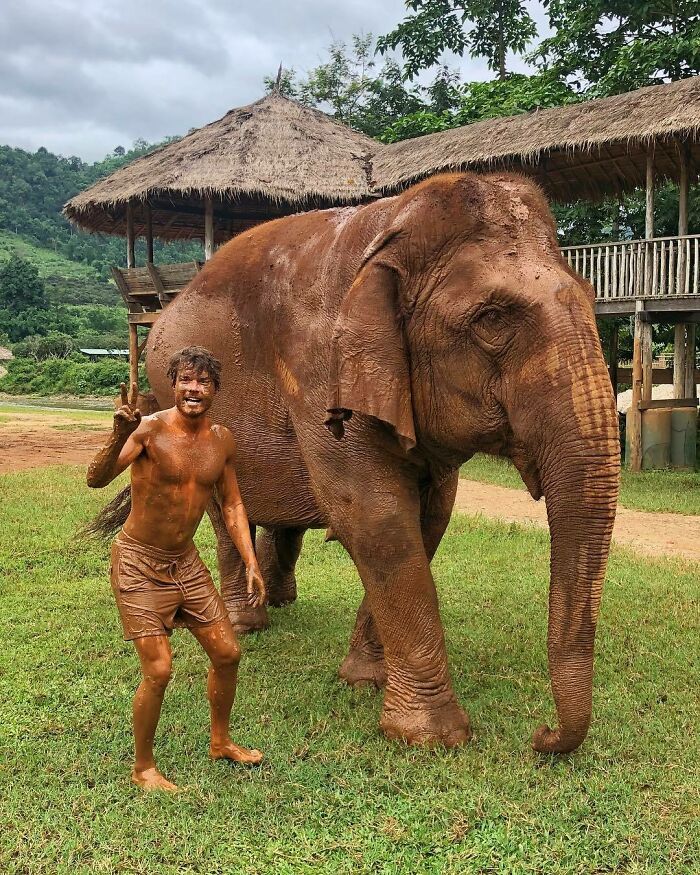 15. The Goat Winking At The Camera 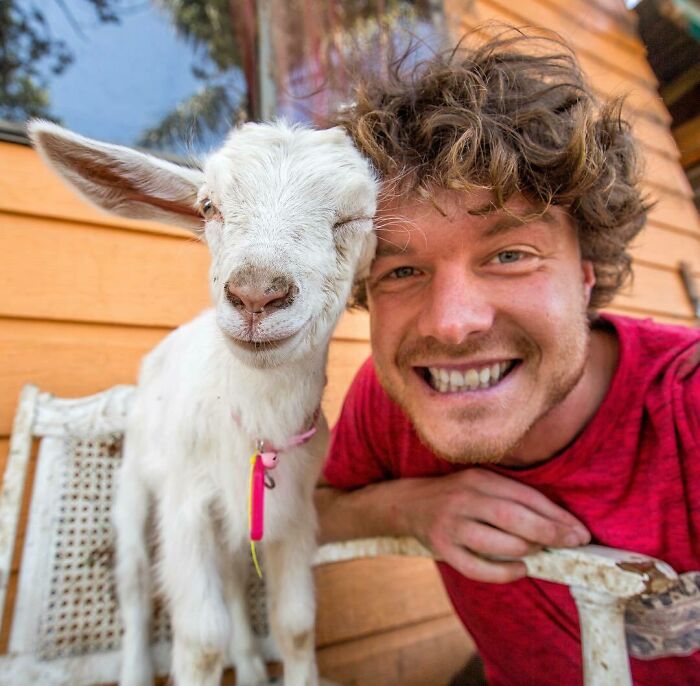 16. A Parrot Showing The World Its True Beautiful Colors 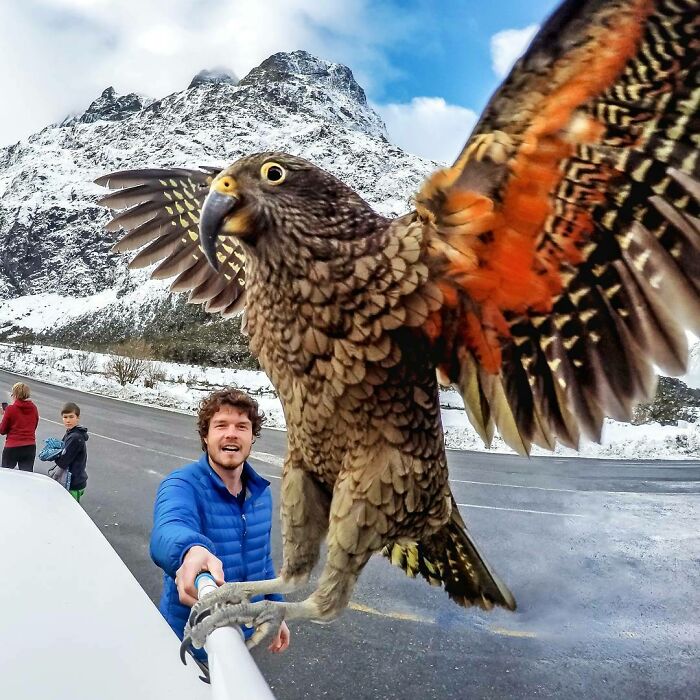 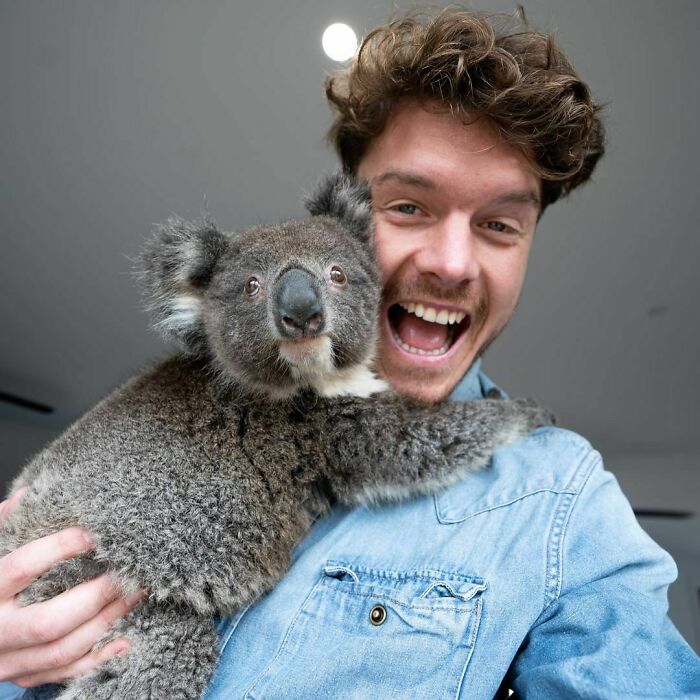 The koala was rescued as bushfires ravaged parts of Australia and is now getting the care it needs at the Kangaroo Island Wildlife Park.

Luckily, $2.6 million was raised to help rescue and rehabilitate these animals. Additionally, the army came and helped set up a new animal hospital and an enclosure for the koalas.

Over 600 koalas got treatment, and more than 100 were released back to the wild.

18. Hangover After A Crazy Weekend? 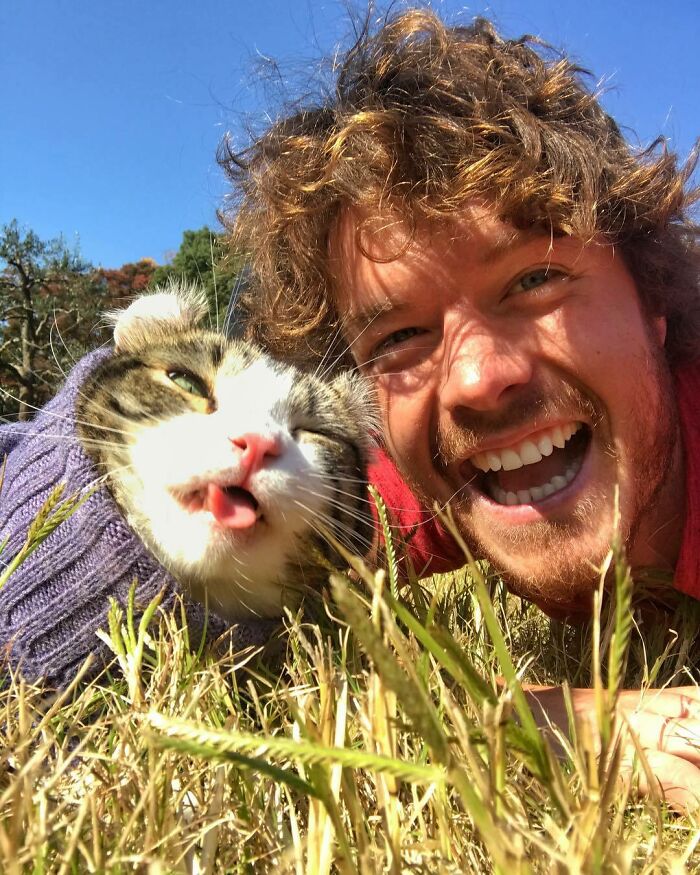 19. The Battle Of The Crazy Hairstyles 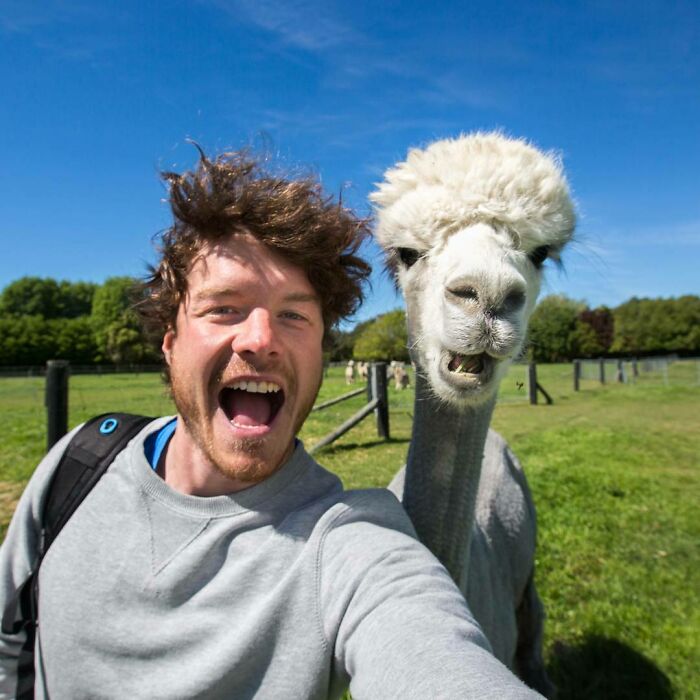 20. The Camel Is Happier Than He Is

21. Ever Seen A Laughing Quokka? 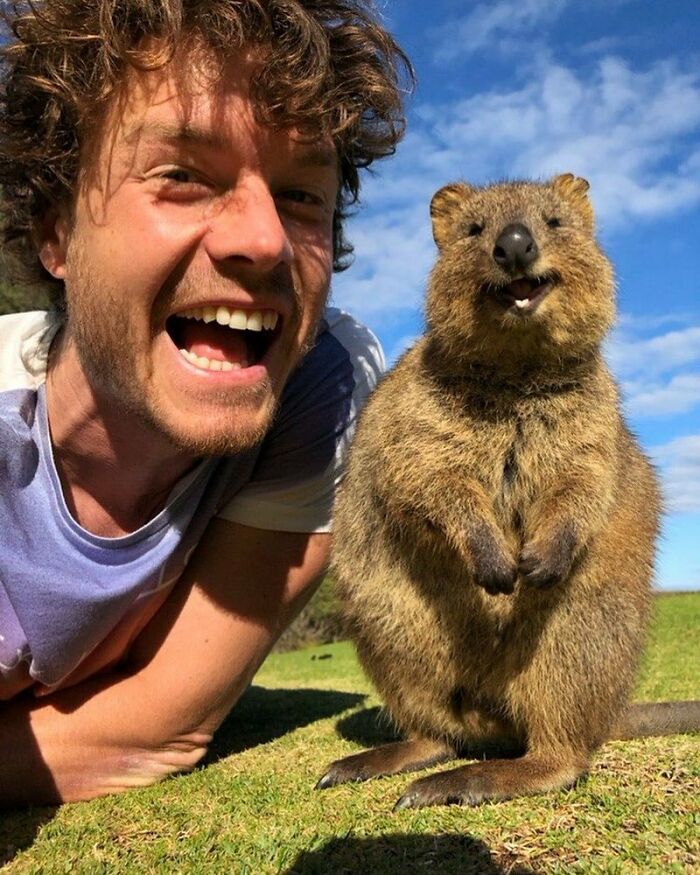 22. There's Something In Your Hair 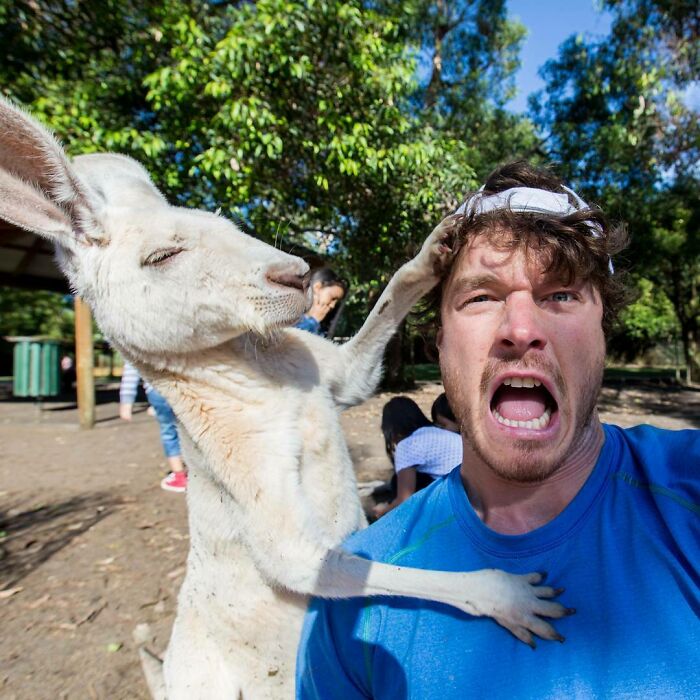 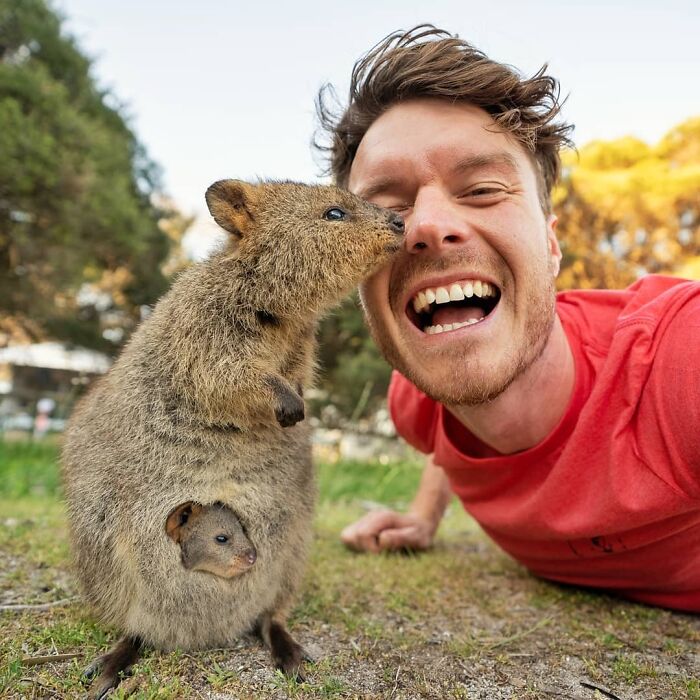 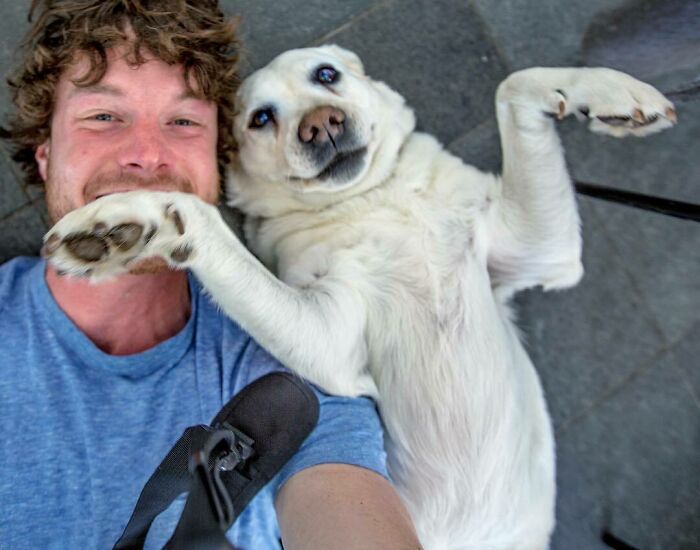 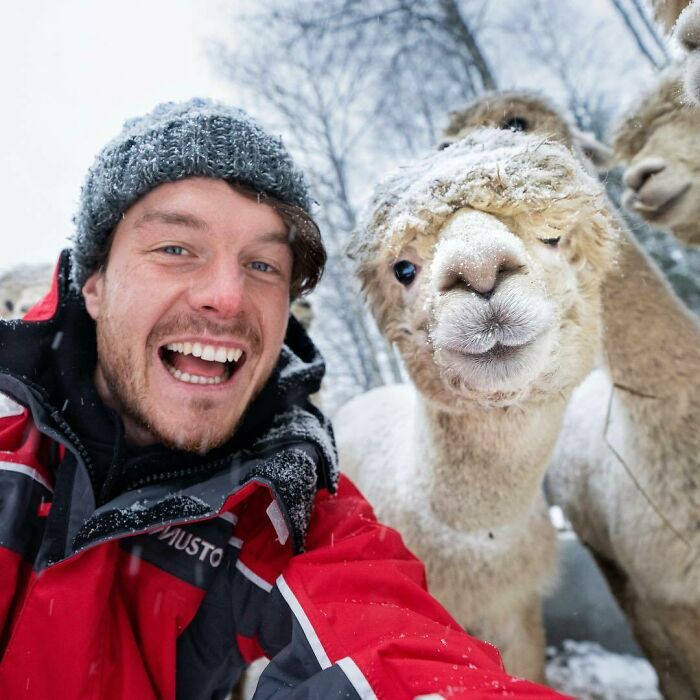 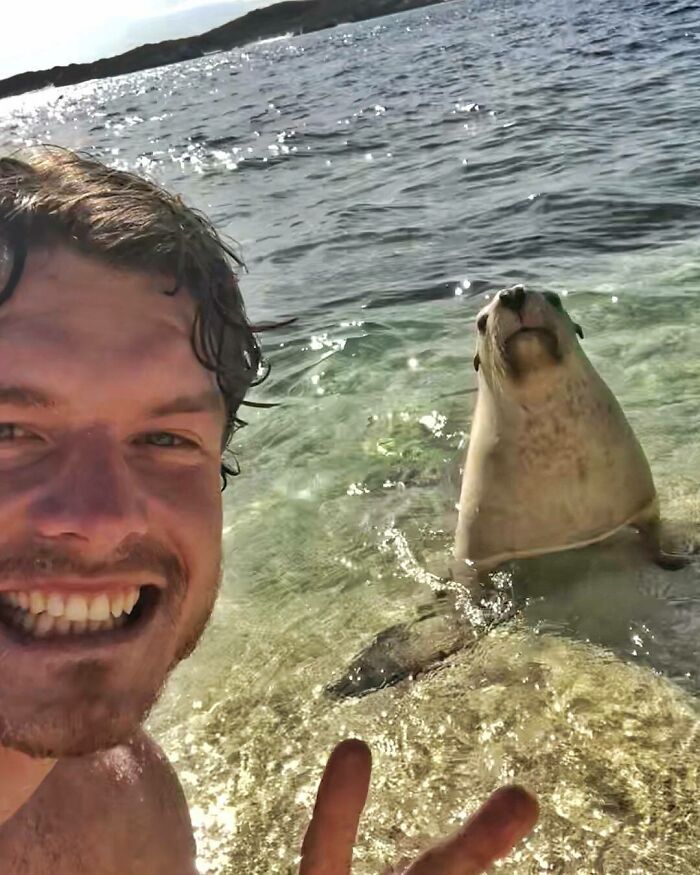 27. Say Goodbye To Everyone 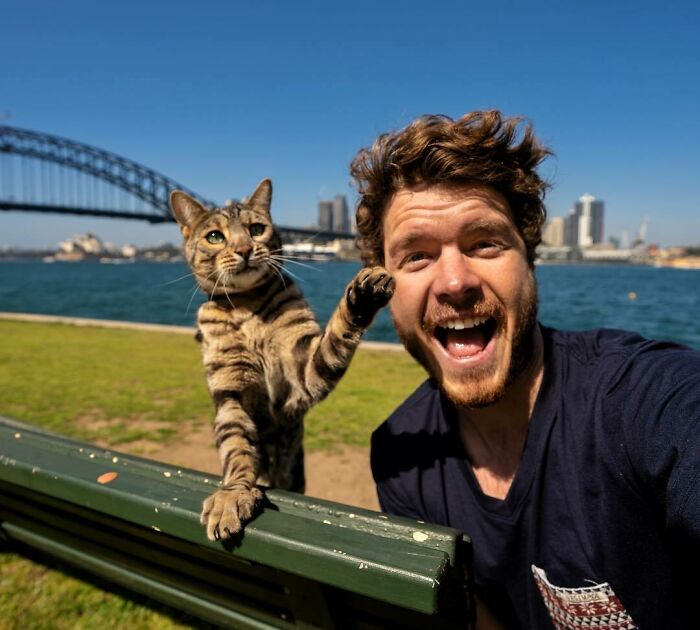 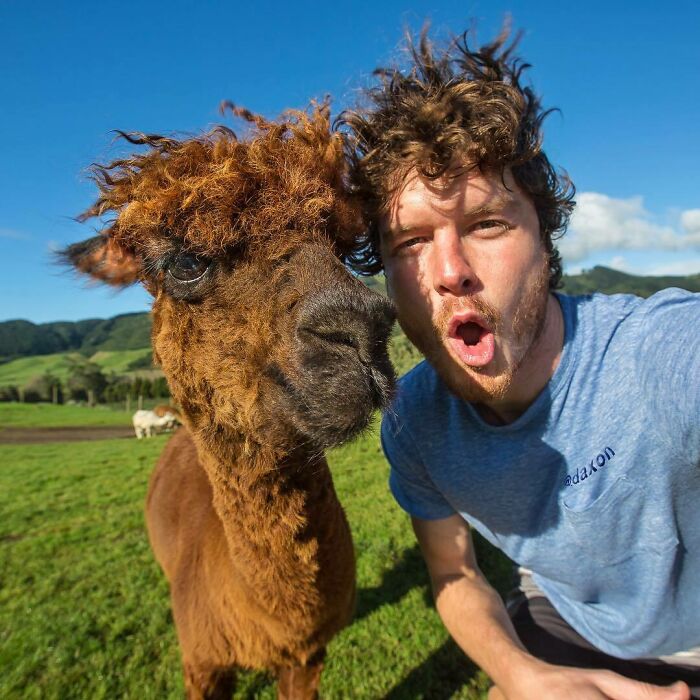 29. Unicorns Are Real After All 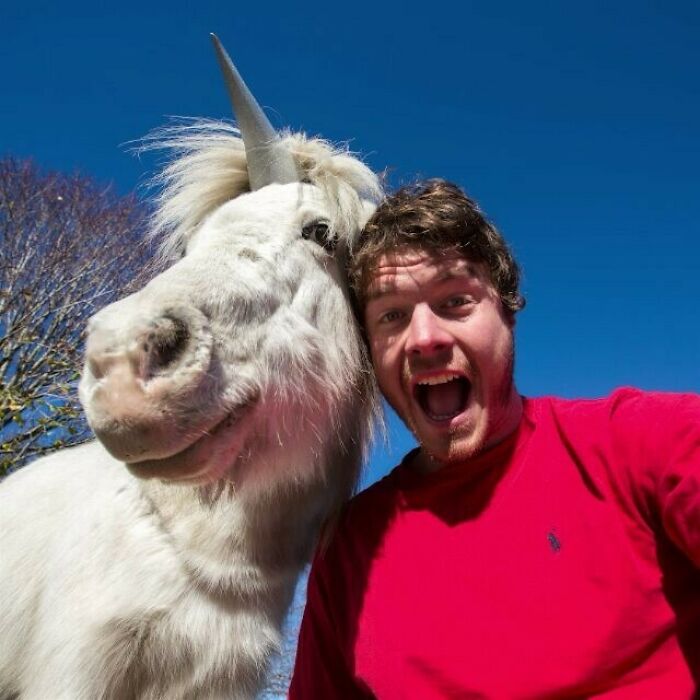 30. Everyone Enjoys Some Time On The Beach 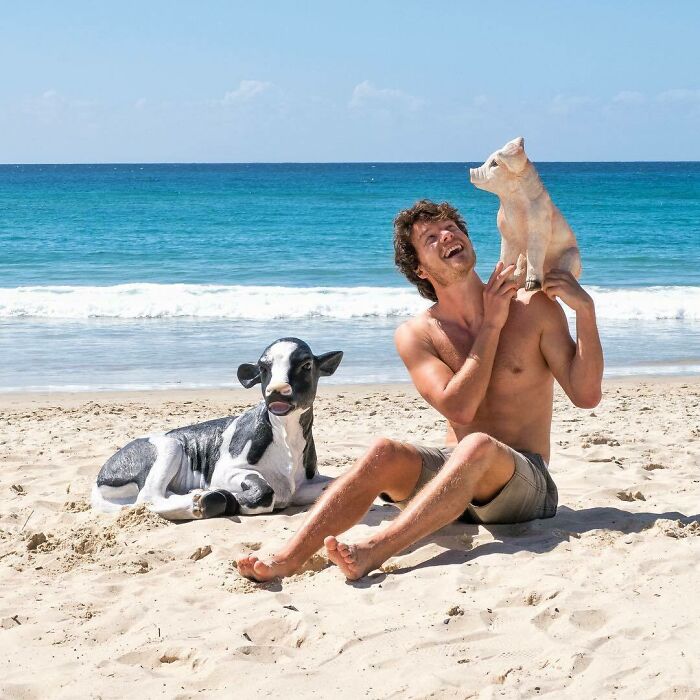 If you ever needed any more proof that being around animals is totally fun and fulfilling, then there you go. We can't help but envy Dixon and how much he has achieved with his mission to pose for photos with literally every animal he meets.