Comic artist Karlo Ferdon portrays simple things in a way that holds deep significance. This Chilean cartoonist makes us laugh with very little to no words. Each demonstration conveys an important point even as they bring smiles or laughter to your face.

With the short, wordless comics he creates, he portrays everyday life and absurdities in a way that almost everyone can identify with. Even if they don't make you laugh, you will more or less relate to the messages they pass. Ferdon actively posts his comics on his Instagram page, which has over 20,000 followers he engages regularly.

When A Matryoshka Doll Meets A 'Nesting' Gift 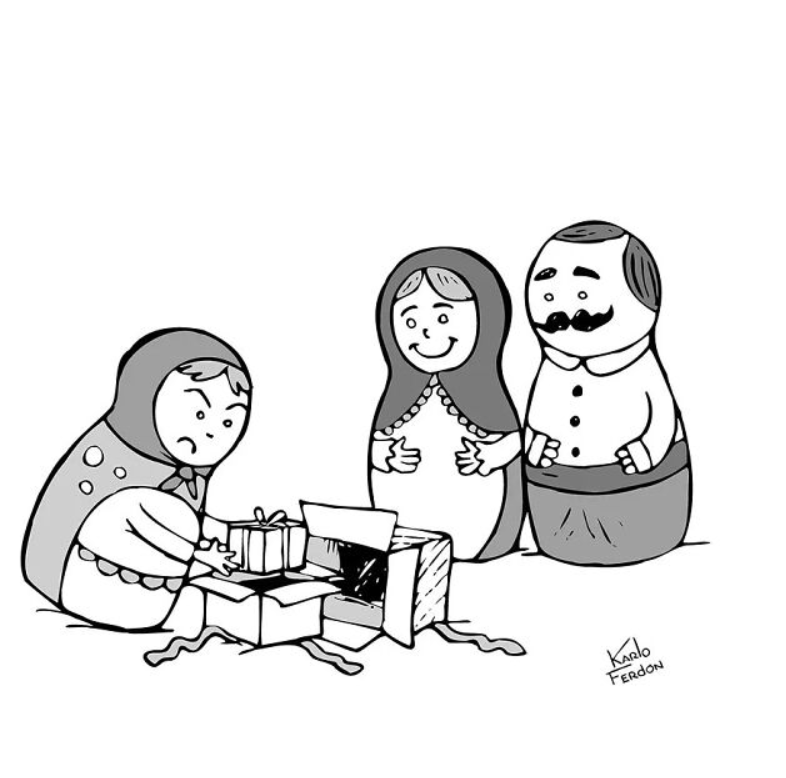 This might look like mere gift giving and having to unwrap many folds to get to the gift. But, it also reminds us of this quote, "that we despise most in others, vices we ourselves possess."

In an interview with Bored Panda, Karlo Ferdon, who now works as a full-time graphic designer, talked about what influences his art. He said:

"From a very young age, I had fun either copying cartoons or comics, but also creating my own stories (very poorly drawn, but I think they were funny)."

His minimalistic cartoon drawings, many times, require no words to understand. They tell stories about food, nature, and the likes, personifying them. He does all of these with an element of humor that makes his art unique.

Animals On A Human Safari 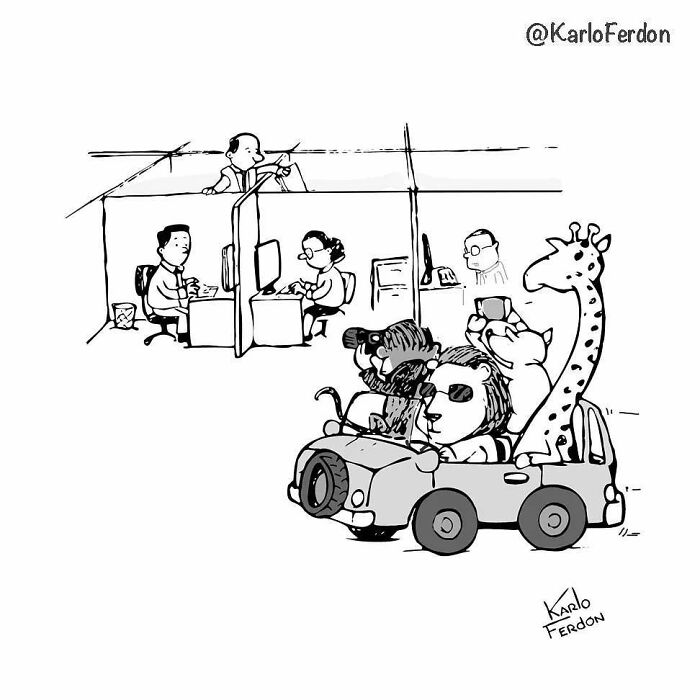 The work culture in many places is truly more or less a Zoo with cages.

When She Catches Him Cheating, Red-handed 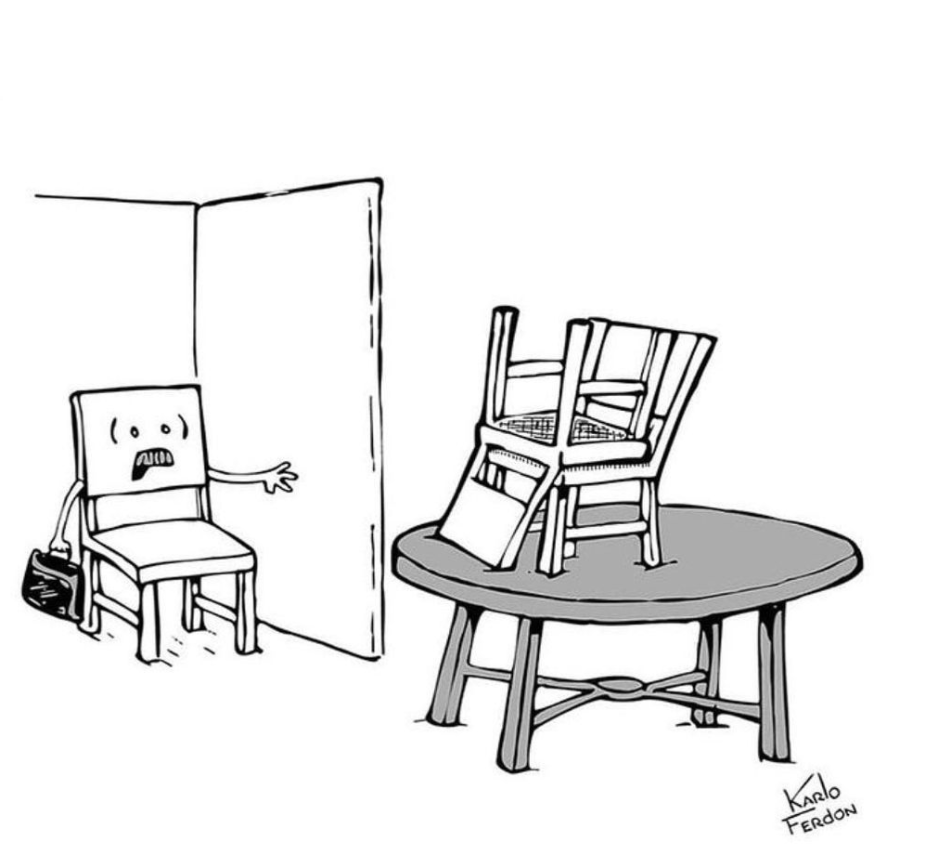 When asked if he had any major influences in his life more recently, Ferdon said:

"My main influences were the comics I read as a child. Comics such as the Peanuts, Calvin & Hobbes, Mampato, Condorito, and many more were the most memorable and, to be honest, these were the main ones I could think of as of right now!"

His comics are reflective of his great sense of humor. He is inventive and creates art that keeps on giving. He posts his comics across social media platforms, from Facebook to Instagram and Twitter. With his dedication and consistency, he keeps gathering fans from different parts of the world, slowly but surely. His audience continues to appreciate and support his innovations. 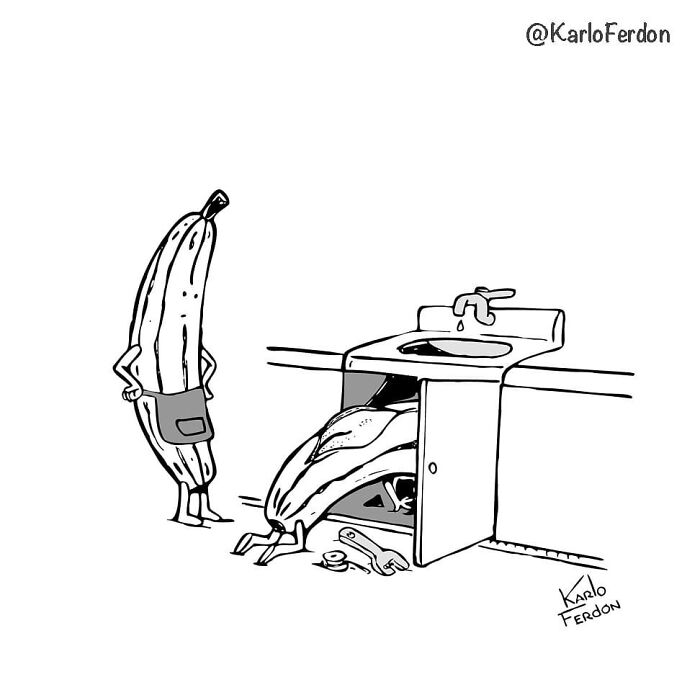 She doesn't look so pleased seeing that high back crack, though.

When A Cat Wishes For The Life The Rats Have

Thoughts of Tom and Jerry...

What makes Karlo Ferdon's single-panel comics special is how he teaches life's lessons and absurdities with the simplest drawings. With 637 posts on Instagram, his followers are constantly entertained. He has a pretty good presence on Facebook as well, with over 10,000 likes.

When asked how long it takes him to practice, produce, and finish his comics, he said;

"For me, coming up with the idea is what takes the longest most of the time. But when it comes to drawing the comics I can complete one comic in an hour, or an hour and a half, depending on the number of details."

Just as a writer sometimes experiences writer's block, artists run out of inspiration and burn out. What about Karlo? Where and how does he get ideas for his comics?

"I do have one tip when it comes to ideas. My formula is pretty much putting the characters in everyday situations and having absurd results with a touch of surprises. Generally, the more you draw, the more ideas you get! It works both ways."

It is no wonder we had bananas dressed as the wife in the kitchen with her apron on and her husband bending over to fix a clogged pipe.

The Smile Behind The Mask 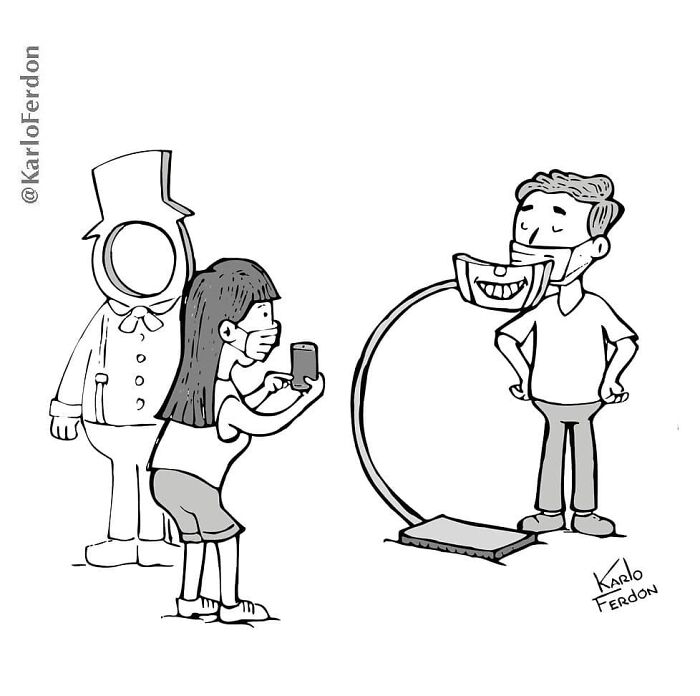 What a nice perspective!

When Your Heart Races Ahead Of Your Head 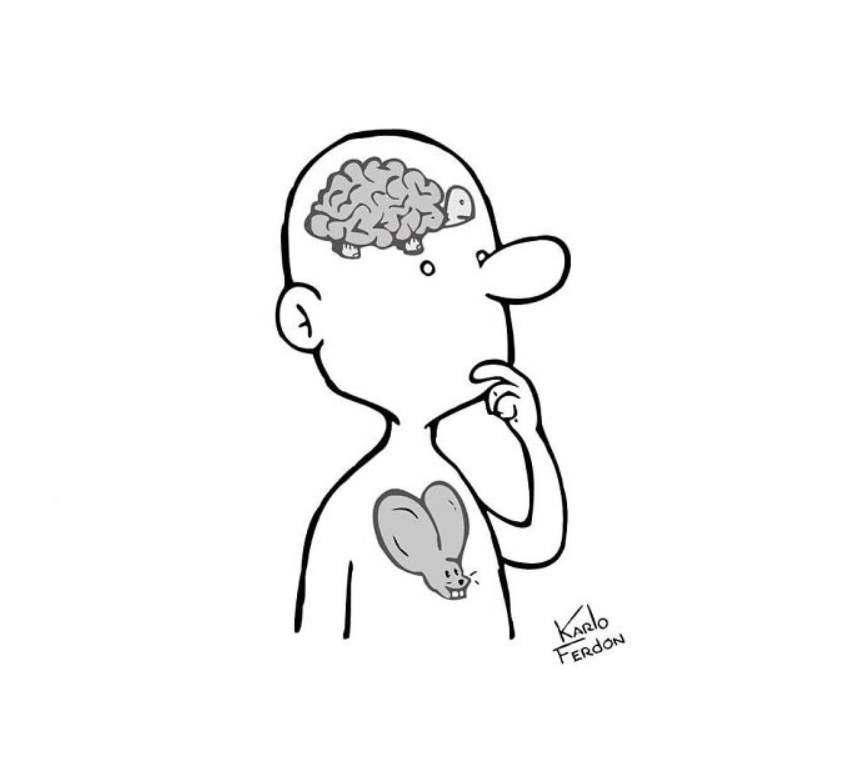 This happens almost every time. But, slow and steady wins the race if you don't let your emotions overrule your power of reasoning.

When Karlo gets burnt out, he shares how he deals with it.

"Sure, I do get burnt out and there are also creative blocks sometimes. My personal suggestion is not to push yourself too hard. Just try to think that the best drawing and the best idea is the one that will come tomorrow."

He also talked about how people react to his work with the words:

"If telling the truth, generally, people tend to react very well. Of course, there are always those who do not understand the joke or understand the opposite of what the cartoon tries to say or portray. Still, it is something that usually happens when making humorous comics without any words."

It comes as no surprise since many of his comics can be interpreted to mean different things.

Even In The Most Holy, Mask Up 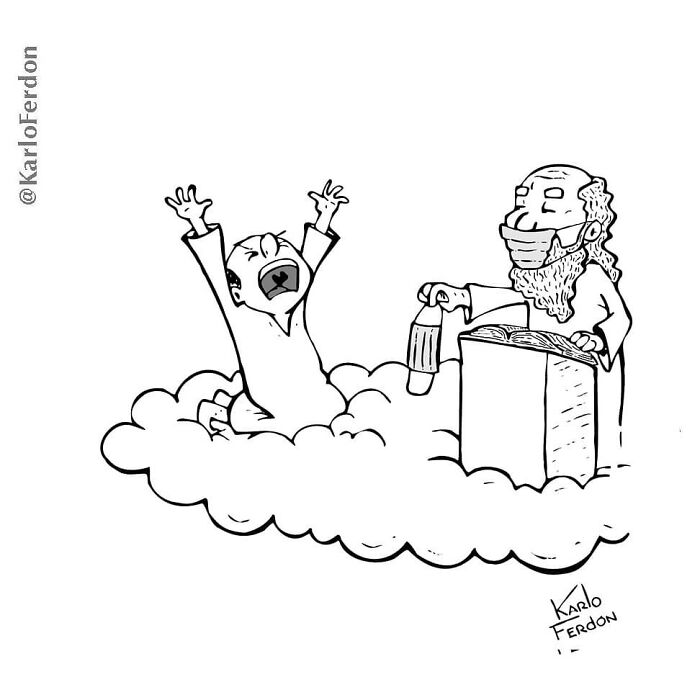 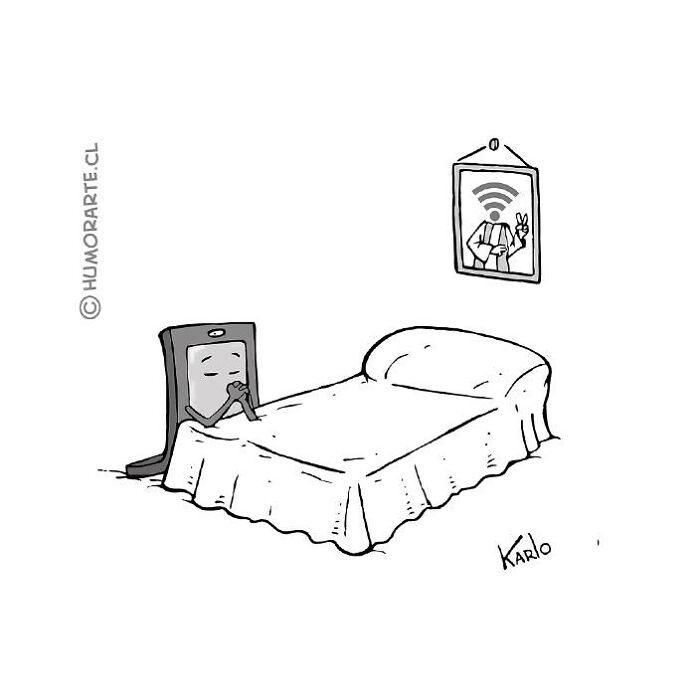 If this is about God, then it's either about prayer as wireless communication or Wi-Fi as God.

What about the creative process? How easy is it? Is it enjoyable? Ferdon says:

"My favorite part of the process? Probably when I try to translate what I have in mind onto the blank sheet of paper. It is not always a true copy of what I had in my head, but I do my best to make it a reality."

He further spoke about what motivates him.

"At the beginning, my works were published in the press, local newspapers, and magazines. Little by little, social networks were also started to give artists more independence, and before I knew it, there were Fotologs, blogs, and now even Facebook and Instagram pages."

Karlo Ferdon remains thankful to everyone who follows his cartoon and comics. 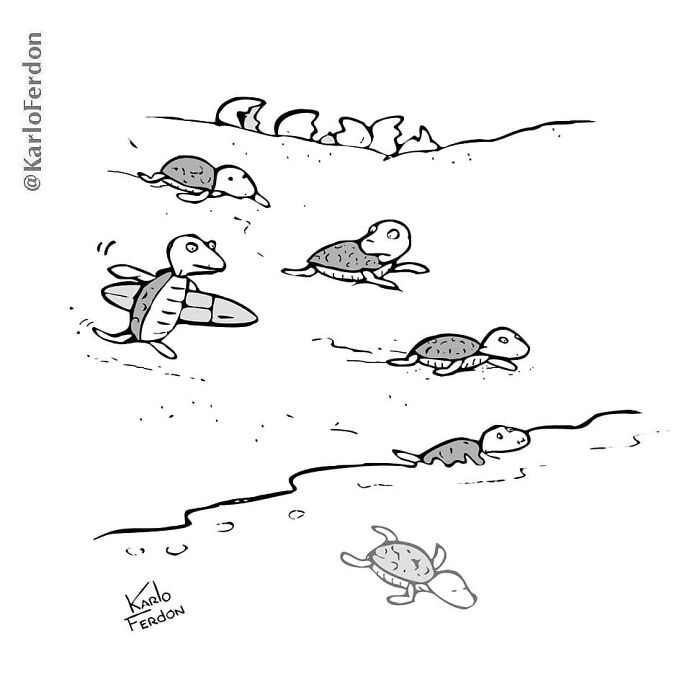 This evolution! The stare from the other turtle, though. 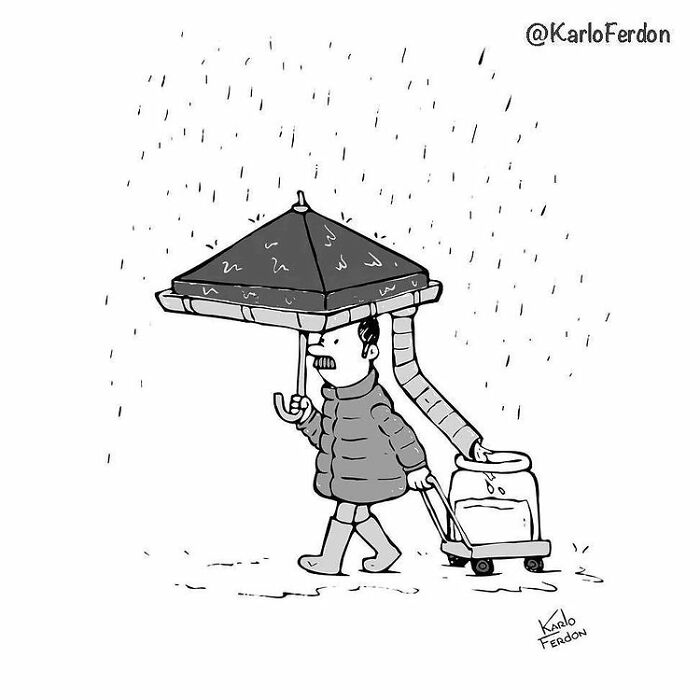 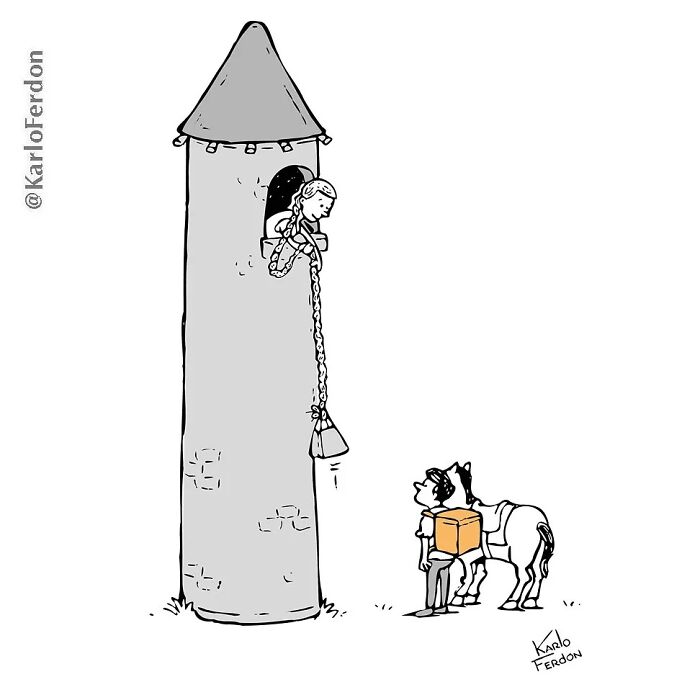 Every Wife To Her Husband... 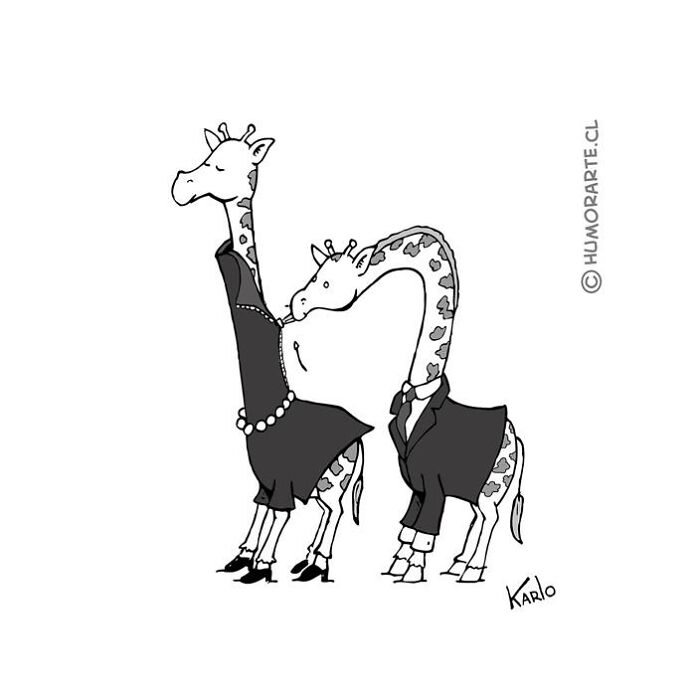 But helping to zip up her dress is one of the sweetest, simplest gestures ever.

What Your Masks Should Protect 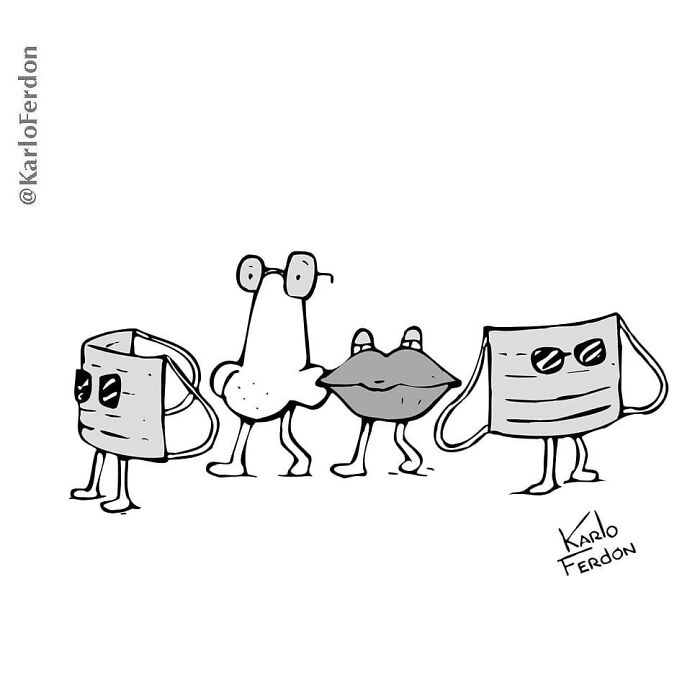 The Rippling Joy That Comes With Sweet Gestures 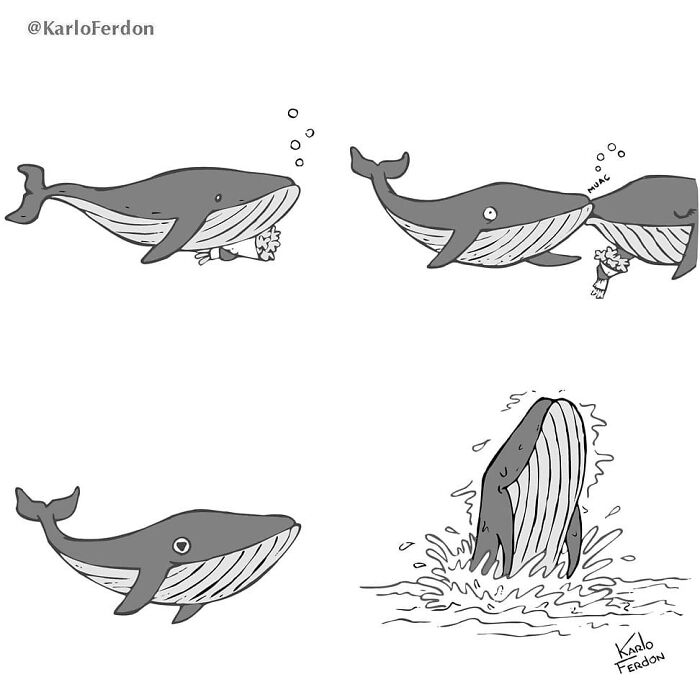 Alarms And Babies Have A Lot In Common 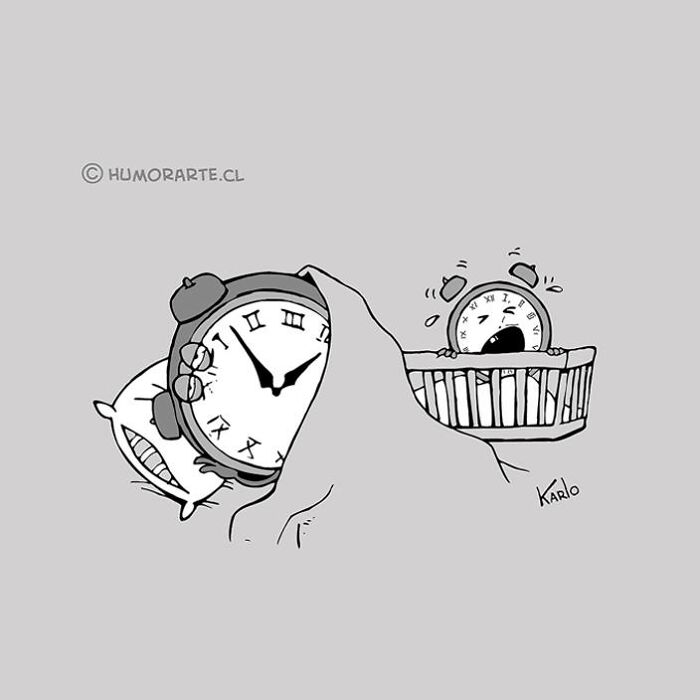 They wake you up at ungodly hours, but you can't ignore them. By the way, you make both of them with your very own hands.

What Your Key Does 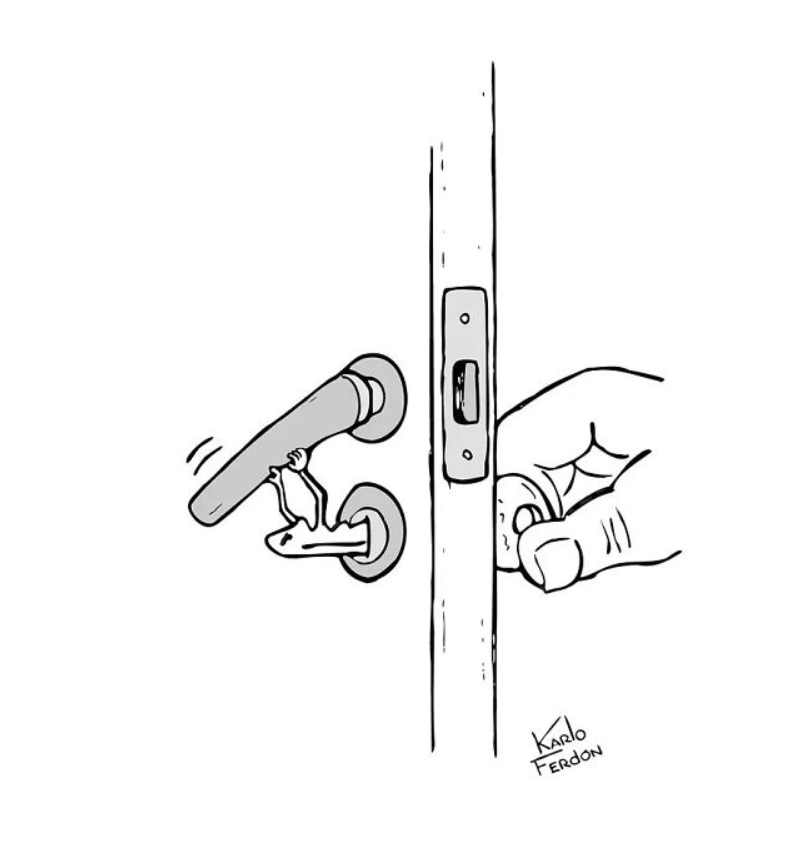 Did this give you an eerie feeling as well? Like a thief breaking in? 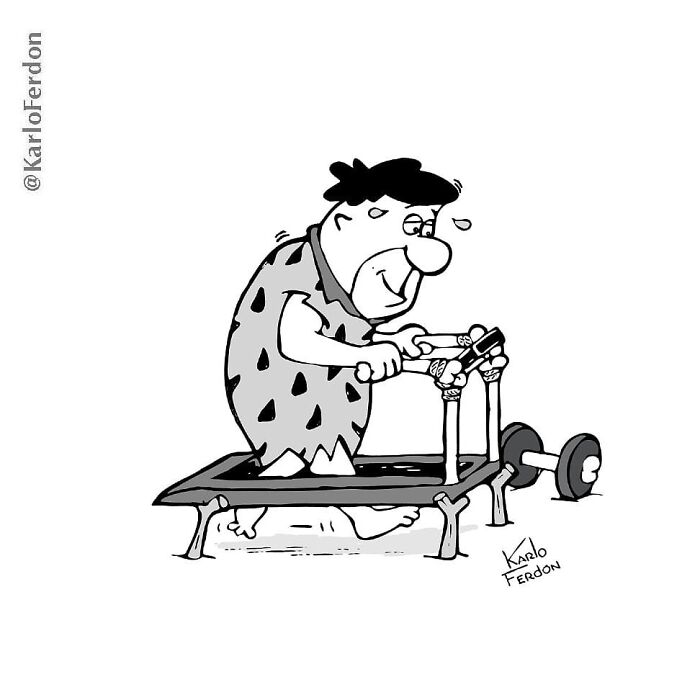 It's the resigned look on the faces of his disciples as he plays on the water.

Everything Still Goes Back To The Ground 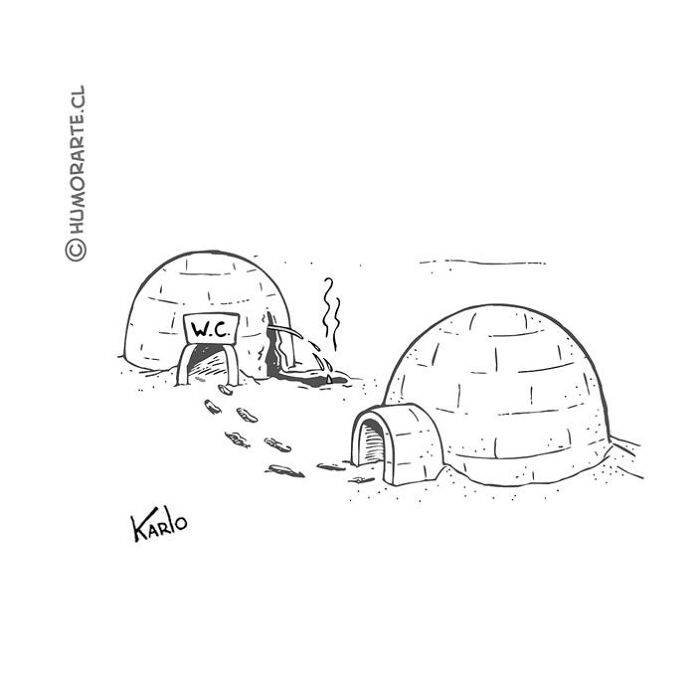 Whether it's a modern W.C or ancient mode of doing away with body waste, the ground takes it all. 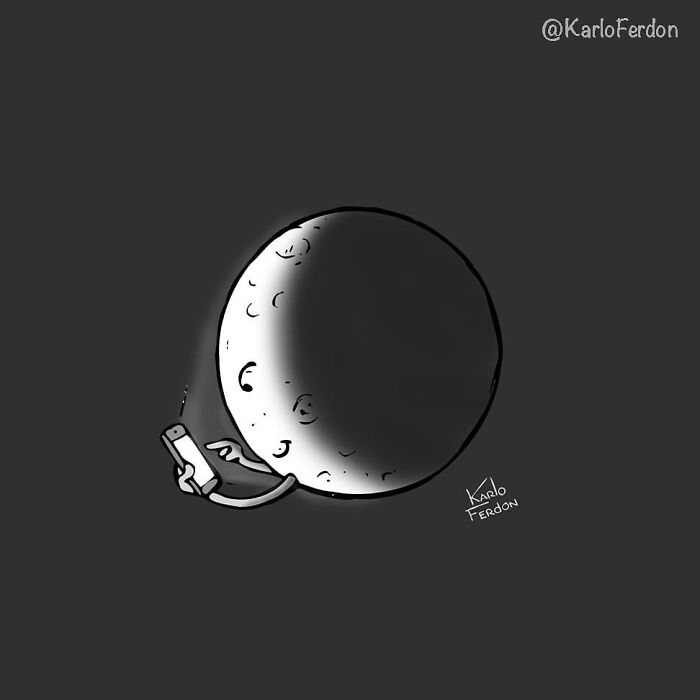 What a nice way to explain that. 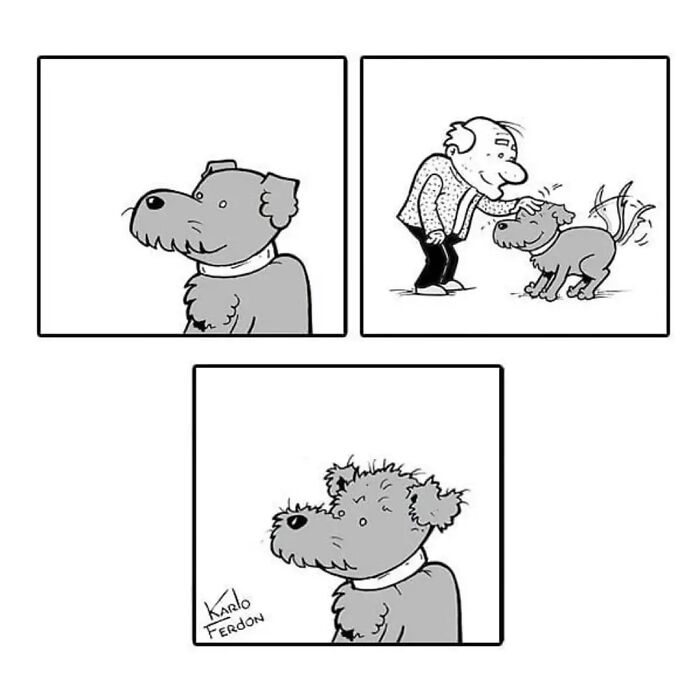 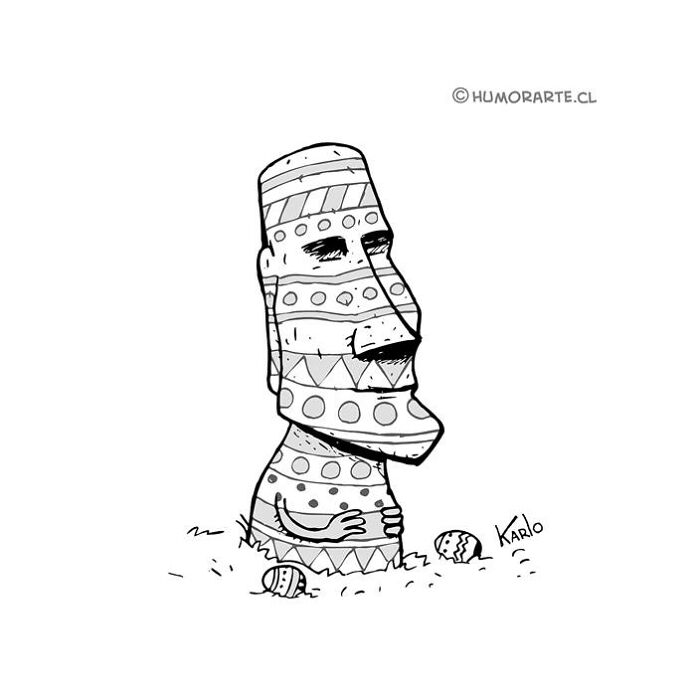 A Perfect Portrayal Of Kids And Their Parents 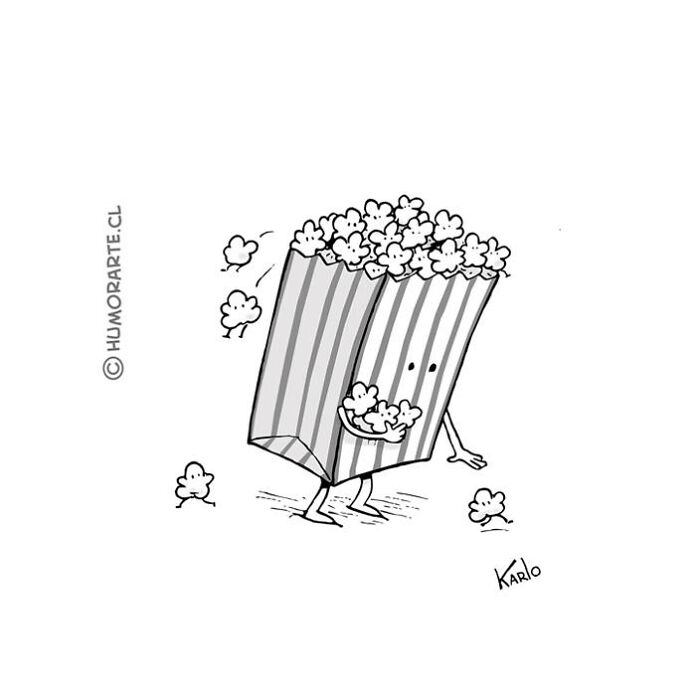 It is a never-ending task.

The Fear Of Covid 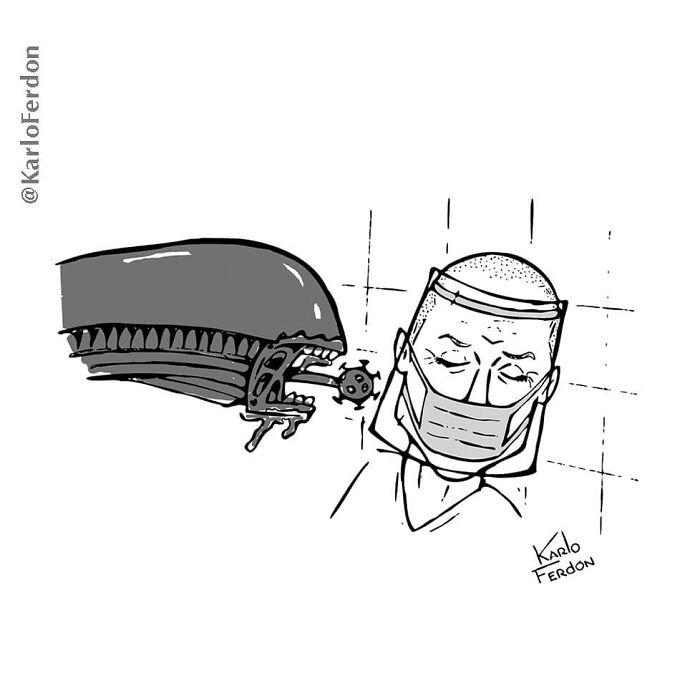 Papa And Son, Together Even In Death 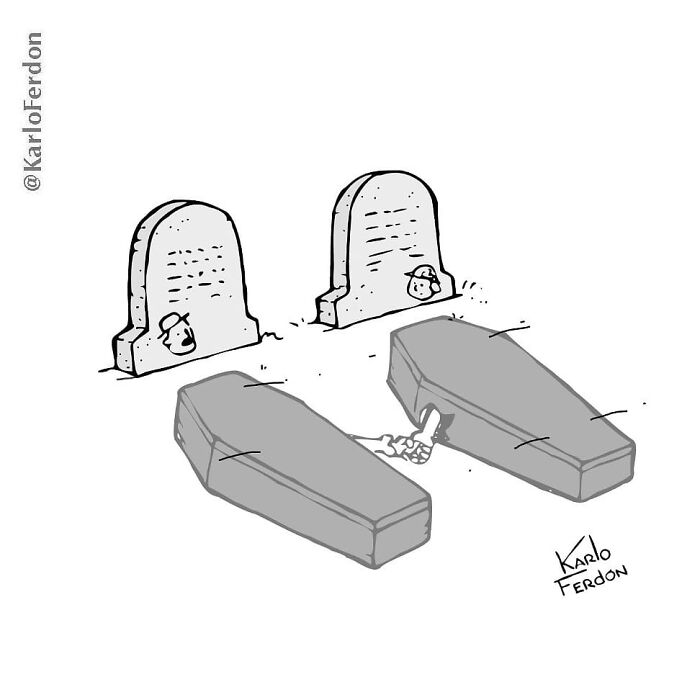 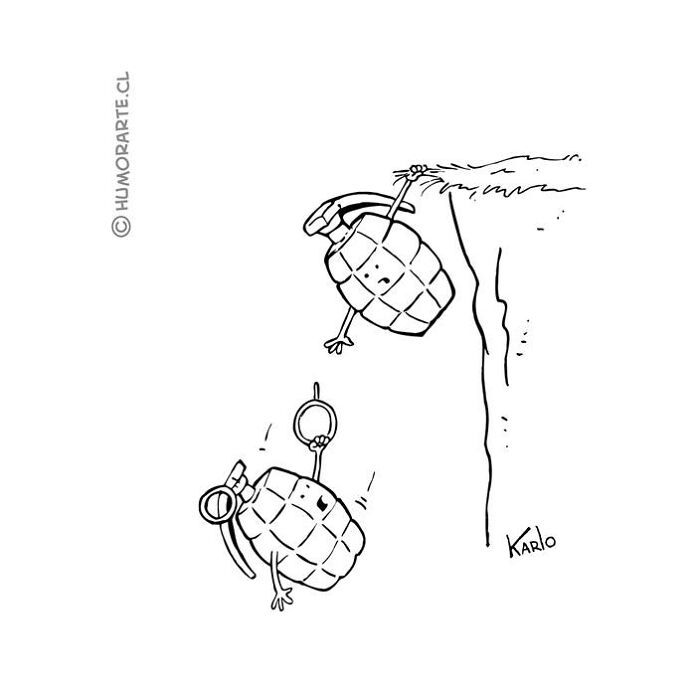 Our Knights In White Armor 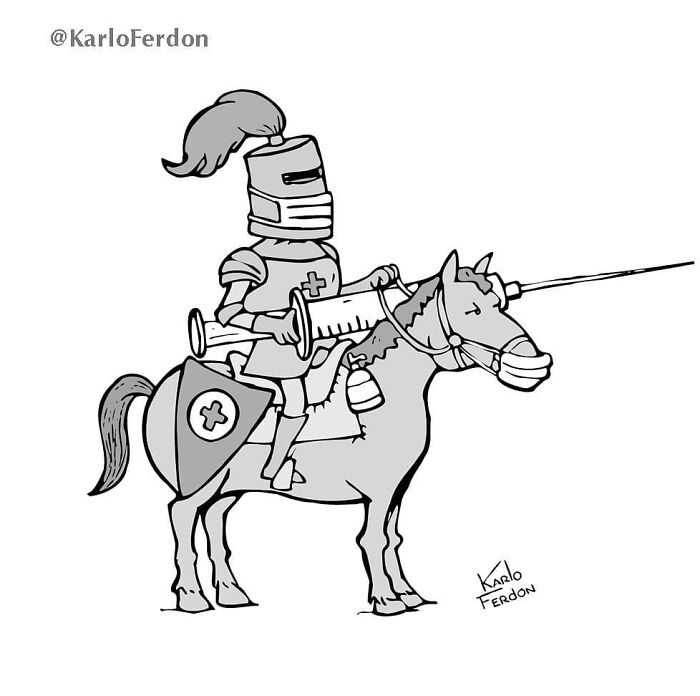 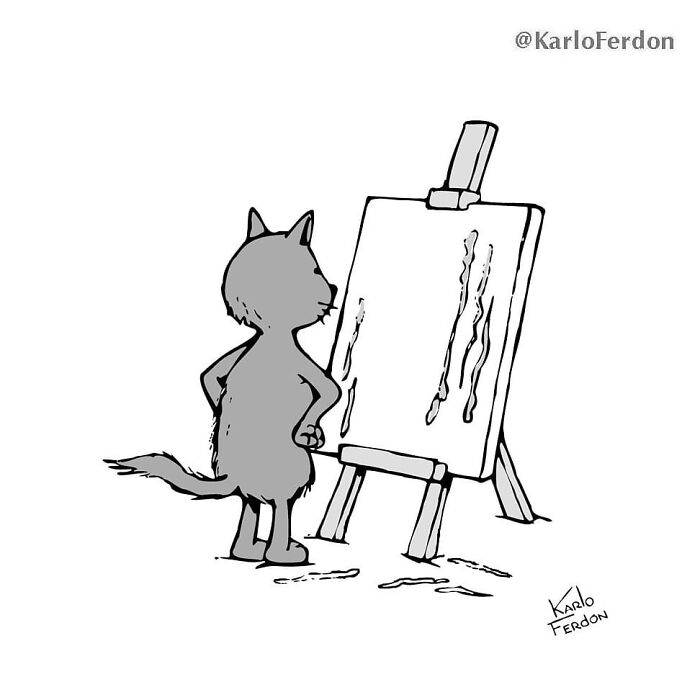