Lawnchair Larry was a man who took to the sky in 1982. His name was Larry Walters, but he got his nickname after ascending to an altitude of over three miles in a chair lifted by helium-filled balloons.

Up to this day, he is remembered as an everyday man with a dream who executed an odd plan and succeeded. He is also recognized as a fool whose strange stunt was extremely dangerous.

During his unplanned flight, he could not control his altitude or direction, and he might have been swept out to sea. When he launched his aircraft, he did so from his backyard. A regular truck driver who wanted to do something he dreamt of doing, despite the warnings of others.

The story of Lawnchair Larry is cautionary. While he might be a folk hero who inspired us to follow our dreams, he should also remind us to think things through and be careful what we wish for. His unusual flier is one of many items now on display at the Steven F. Udvar-Hazy Center.

Who Was Lawnchair Larry Walters? 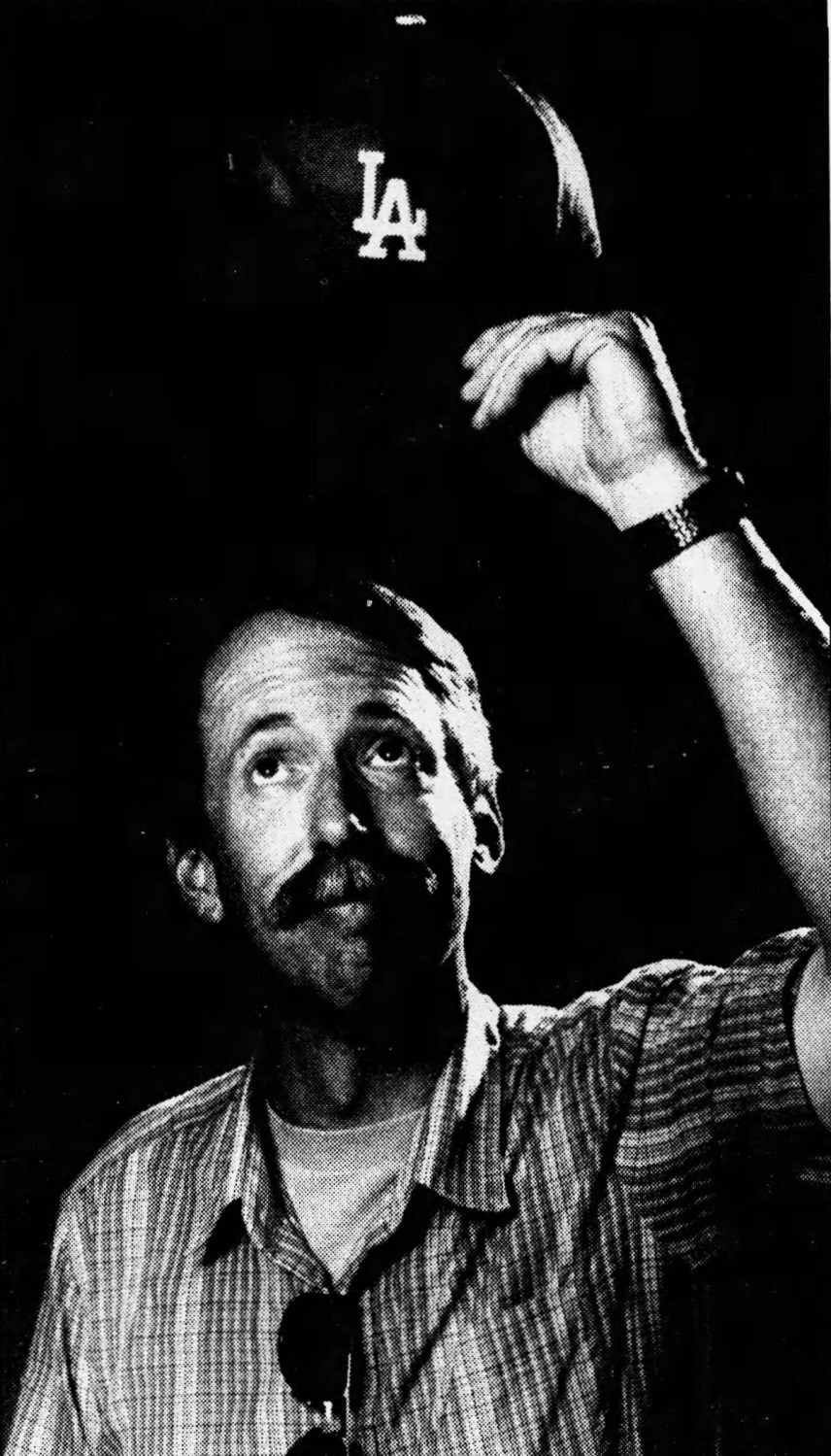 Lawnchair Larry Walters was a truck driver who dreamed of flying. He was born in North Hollywood, in Los Angeles, California. His dreams were big, but they never came to fruition through conventional means.

When Larry was 33 years old, he had already dreamed about being in the air on an airplane or a balloon. He even joined the Air Force and fought in Vietnam because he wanted to fly the plane. Sadly, he was denied because of his poor eyesight. When he visited an Army-Navy surplus store, he saw helium balloons hanging from the ceiling, which awakened his dormant dream: flying using balloons.

This was extremely dangerous since Lawnchair Larry didn't have any type of training, neither as a pilot nor as a balloon operator. However, nothing stopped him from proceeding with his dream, not even common sense. This led to the events of March 1982. It was the day when Larry decided he would carry out his vision. 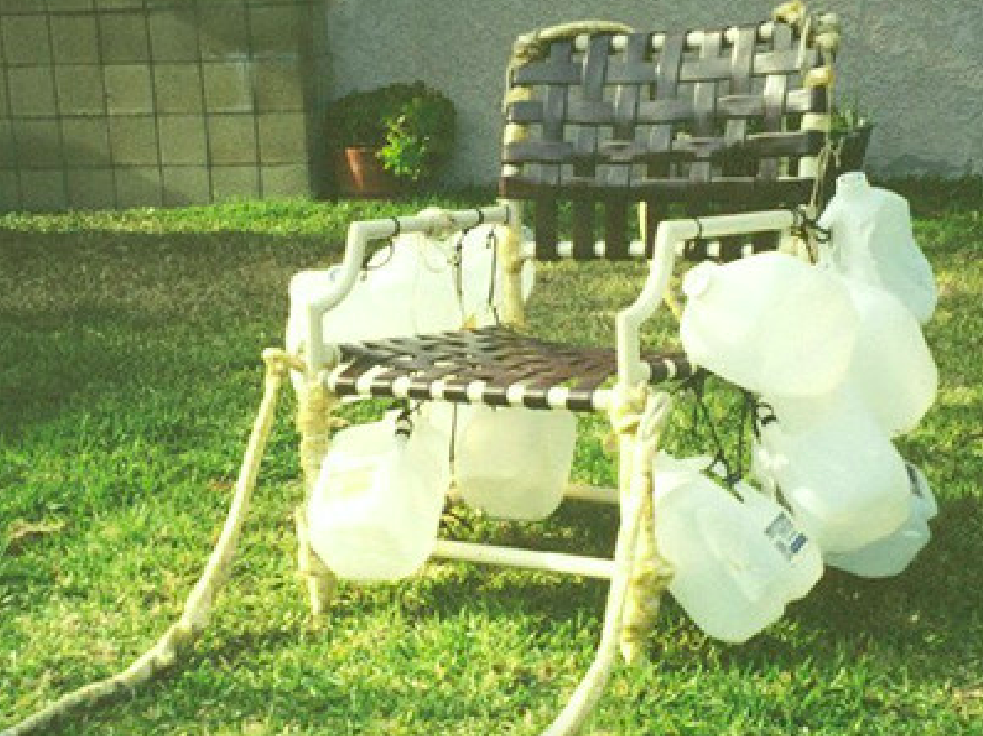 At 11 AM on July 2, 1982, Lawnchair Larry decided to take flight from the backyard of his girlfriend's home in San Pedro, California. He would realize this by tying 42 8-foot helium-filled weather balloons, tiered into four layers, to a Sears-purchased aluminum lawn chair. The chair was angled back at a 45-degree angle, using gallon jugs of water as ballast.

This aircraft was obviously self-made, and Larry called it Inspiration I. It was stocked with sandwiches, cold beer, a CB radio, altimeter, camera, and a pellet gun to shoot out balloons for controlled descent. 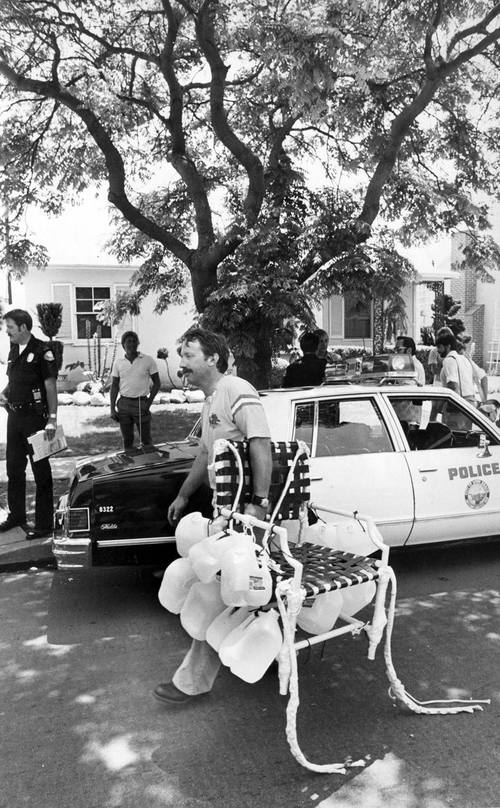 Even though Lawnchair Larry had learned to skydive as a precaution, this wouldn't be enough for what was about to come. His chair was tethered to his Jeep using three lines. When he climbed aboard, he donned a parachute and proceeded. Even though he intended to remain tethered at 100 feet for an hour and contact the FAA and a few airports prior to launch, nothing of this had come to pass.

He calculated that he would lift up a few hundred feet once the lines were cut, and the winds would slowly drift him east toward the Mojave Desert. He didn't plan much for this flight, however, and these calculations were significantly off.

The flight of his dreams cost him approximately $4.000. Before descending slowly and safely, he had planned to spend less than an hour in the air, enjoying a snack and a cold beer. His girlfriend Carlo and a friend of hers would be Larry's team on the ground for the flight.

The Flight Of Lawnchair Larry 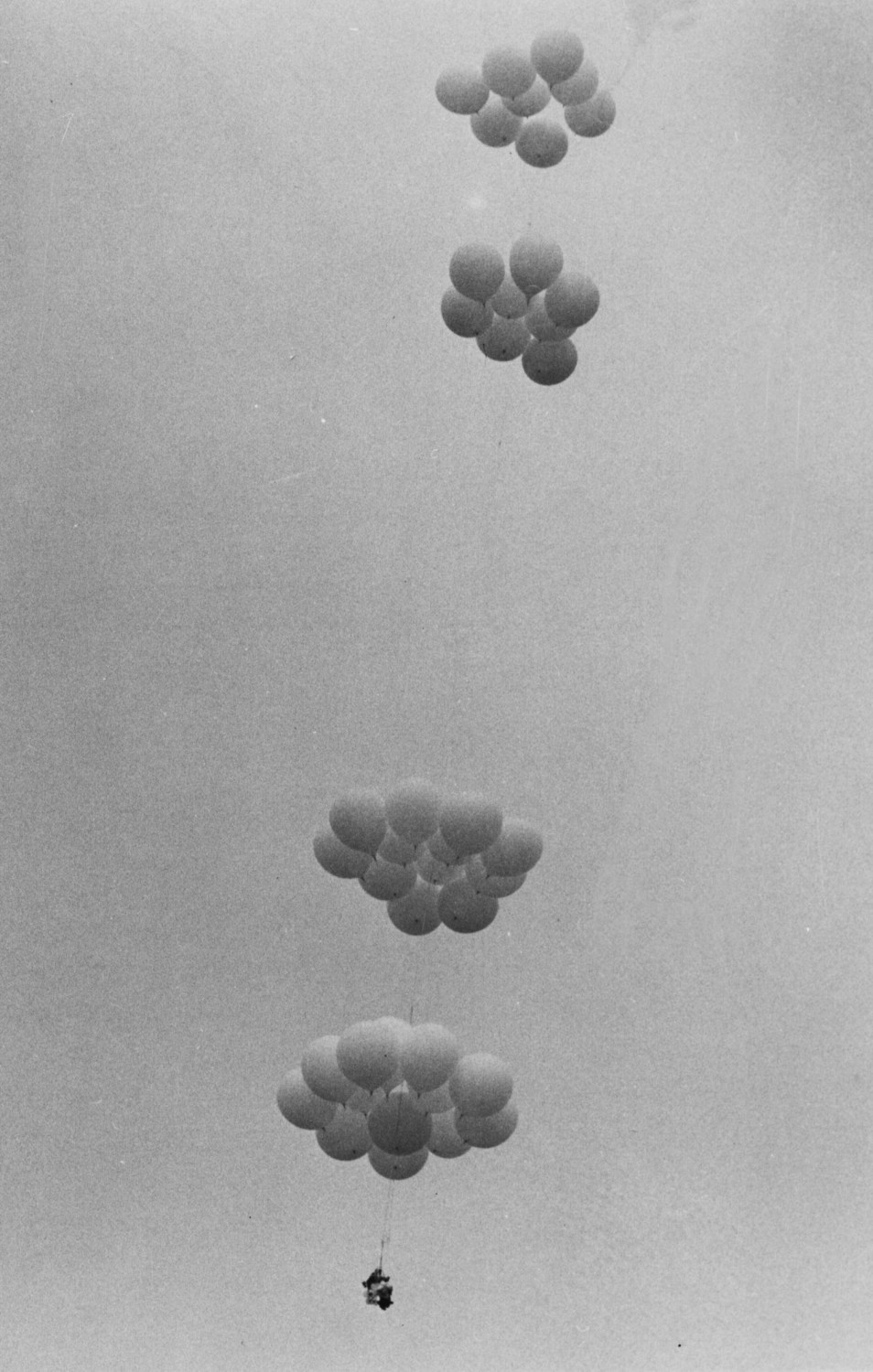 As the preparations were ongoing, Lawnchair Larry inflated the balloons and tethered them to his chair using nylon wire the day before his flight. The balloons were arranged in six tiers, with the entire contraption rising about 180 feet high.

Since he planned to rise about 30 feet and then level off, be there for a bit, and once he was done, shoot the balloons, there was no need to take any other preventive measures. Sadly, things did not go as planned, though.

Lawnchair Larry had attached the chair to his Jeep using a guy wire and instructed his girlfriend to release the guy wire. Once his lawn chair was cut loose, it shot into the air, moving at a rate of thousands of feet per minute. This was much faster than they expected. The motion of the chair caused him to lose his sunglasses, but at least he kept the altimeter which allowed him to track his height. Finally, he leveled off at 16,000 feet.

It was the lifelong dream of Lawnchair Larry to fly, and it came to fruition. The only difference was that instead of lazily floating off the ground and beginning his drift east at a low altitude, he was propelled thousands of feet into the air.

During his flight, he was sighted by multiple commercial airline pilots around Los Angeles International Airport, who called the bizarre sighting into air traffic control. In the air. Larry Walters began to feel cold and dizzy from thin air and feared if he shot out any of the balloons that the balance of his chair would become unstable.

In this time of emergency, he used his CB radio to call REACT, a citizen's band radio monitoring organization. He told them:

"The difficulty is, ah, this was an unauthorized balloon launch, and, uh, I know I'm in a federal airspace… and I don't know how to get down."

His descent was made only after about 45 minutes in the air. This was when he finally found the courage to shoot out some of the balloons. Lawnchair Larry started with those in the outer ring but accidentally dropped his gun in the process. From this point on, he poured out ballast to control the descent.

He had brought some 35 gallons of water in plastic jugs tied to the arms of the chair. After dumping much of it, he was able to get close to the ground at a relatively safe speed. Even if his plan was to go over the Mojave Desert, he never came near it.

How It All Ended 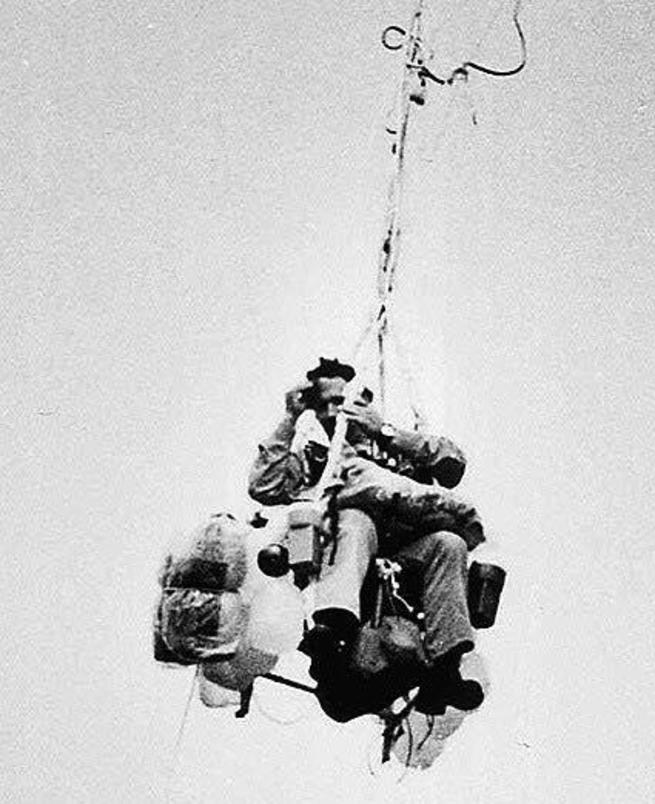 Lawnchair Larry might have planned calm descent into the desert in his Inspiration I. However, he ended his 1.30-hour flight tangled up in power lines at 432 45th St. in Long Beach. This resulted in a 20-minute electricity blackout in the area.

There were consequences to be faced after his flight. Lawnchair Larry was arrested, and the FAA came at him with four charges and a $4.000 fine. Over time, the fine was reduced to $1.500.

Thankfully, Larry didn't receive as much as a scratch in the stunt. Even if his landing had left him dangling on the power lines, a dozen feet above the ground, and even though he didn't have a seatbelt, the flight had ended without any injuries. Larry Walters was rescued from his contraption and shook the hands of the people who had come to cheer on him.

After this, he was escorted into a waiting police cruiser.

Plenty of people admired Lawnchair Larry, but also a lot of them mocked him. His fame came too fast and then suddenly went away, leaving him not knowing what to do. In the following decade, Larry was left struggling with how to cope. When he was 44, in 1993, Larry drove to his favorite LA hiking trail and shot himself in the heart.

Lawnchair Larry never said a word about what was troubling him or offered an indication of his dark thoughts. However, after following on his dream and realizing it, it seemed that he was left lost, not knowing what to do. To this day, he is remembered as the Icarus of the 80s.