The thought of the present being predicted in the past has always been intriguing. If there was concrete evidence that this type of past-to-present prediction was possible and found in ancient texts discovered decades ago, it would be a fascinating discovery.

The Sibiu Manuscript That Defies Time

The Sibiu Manuscript is a document that describes the use of liquid fuel and multi-stage rockets, as well as their intricate designs. Many people are skeptical about the authenticity of such information, as it seems to contradict their current understanding of the world. However, the Sibiu Manuscript is a real document that was discovered in Romania by Doru Todericiu, a professor of Science and Technology at the University of Bucharest, in 1961. The manuscript, which is 450 pages long, was found in the archives of the city of Sibiu (Sibiu public records Varia II 374).

Doru Todericu discovered manuscripts and drawings that depicted early artillery, ballistics, and multi-stage rockets. The manuscripts, which were found in the early 1960s, are written in a language that has been speculated to date back to the 16th century. While it is not known who created the manuscripts, a German man named Conrad Haas is credited with conceptualizing multi-stage rockets and making a significant contribution to history.

The Life Of Conrad Haas

Conrad Haas, who lived from 1509 to 1576, was an engineer from the Kingdom of Hungary and Transylvania. He is considered a pioneer in rocket propulsion, having designed a three-stage rocket and a manned rocket. His ideas and sketches, which are thought to be ahead of their time, are remarkable and somewhat strange considering the historical context. 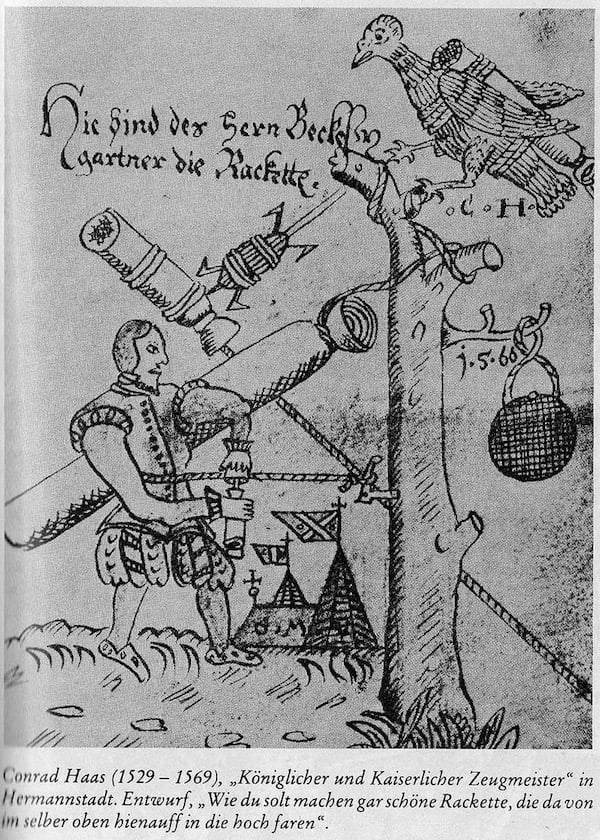 It is believed that Haas was born in Dornbach, which is now part of Hernals, Vienna. He held the position of Zeugwart (arsenal master) in the Imperial Habsburg army under Ferdinand. In 1551, Stephen Báthory, the grand prince of Transylvania, invited Haas to Hermannstadt (now Sibiu) in the Eastern Hungarian Kingdom, where he worked as a weapons engineer and also taught at Klausenburg (now Cluj-Napoca).

Conrad Haas is known for writing a German-language treatise on rocket technology that combines fireworks and weapons technologies, known as the Sibiu Manuscripts.

In the last paragraph of his chapter on the military use of rockets, he wrote (translated):

"But my advice is for more peace and no war, leaving the rifles calmly in storage, so the bullet is not fired, the gunpowder is not burned or wet, so the prince keeps his money, the arsenal master his life; that is the advice Conrad Haas gives."

The Sibiu Manuscript And The Experiment Of Johann Schmidlap

Johann Schmidlap of Schorndorf was a 16th-century Bavarian fireworks maker and rocket pioneer who published a book on fireworks called "Künstliche und rechtschaffene Fewrwerck zum Schimpff," which was first printed in Nuremberg in 1561. 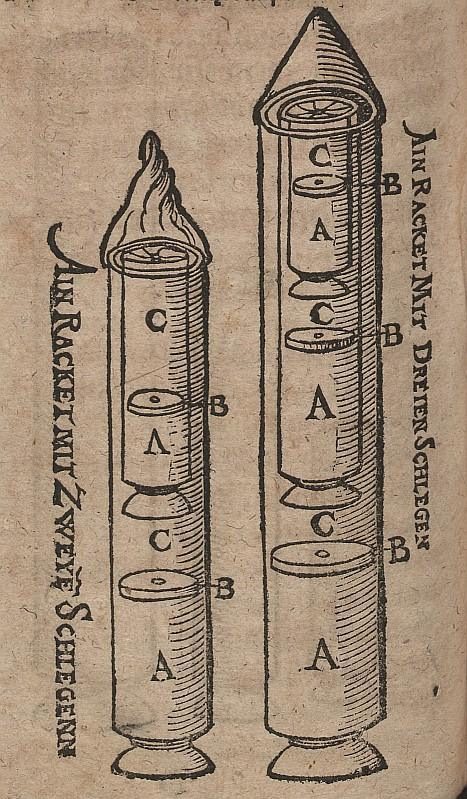 Johann is credited as the first person to successfully fly staged rockets. It is believed that he based his rocket design on the concepts discussed in the work of Conrad Haas and experimented with staging in 1590, using a design he referred to as "step rockets."

Before the discovery of Haas' manuscript, the first recorded description of a three-stage rocket was credited to the Polish artillery specialist Kazimierz Siemienowicz in his 1650 work, "Artis Magnae Artilleriae Pars Prima," which was published in Poland.