There is a great diversity of animal species on the planet. Humans have given them titles based on their size, weight, height, speed, and other characteristics. Never before has an animal been given a name related to a feeling.

This time we will meet the happiest animal in the world, the quokka, a marsupial that lives on the islands of Australia.

Characteristics Of The Quokka 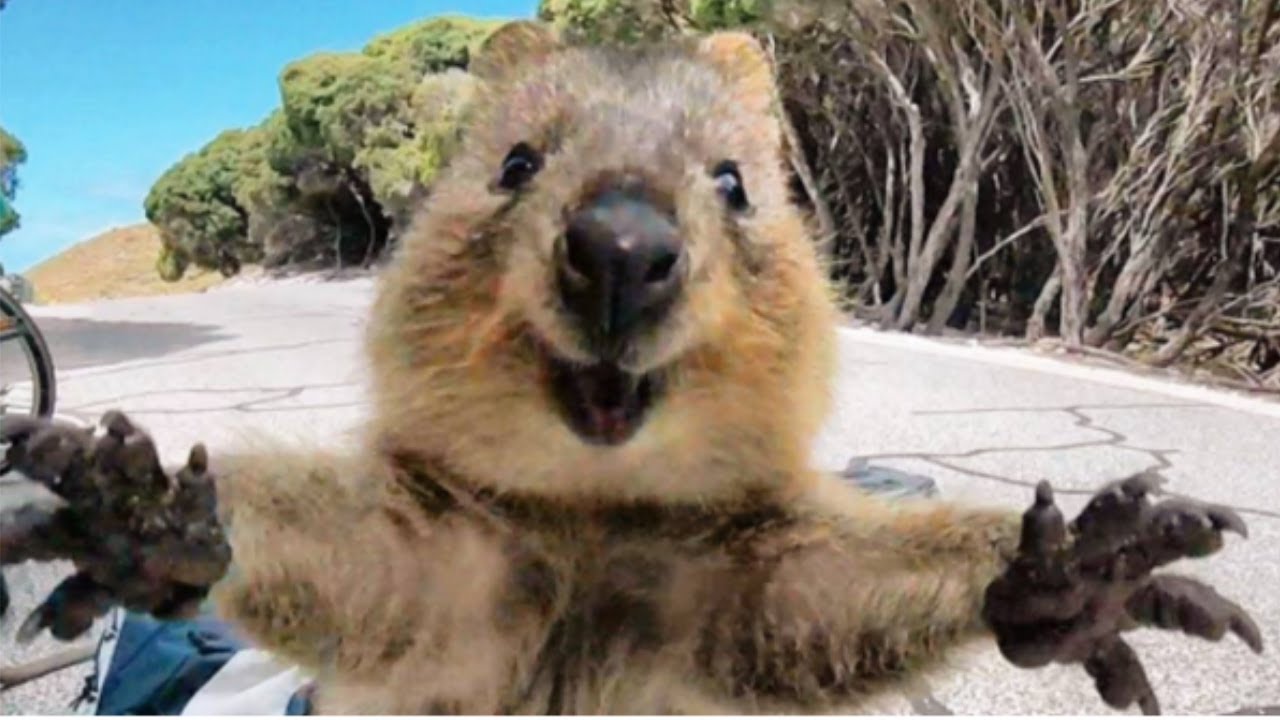 The quokka was declared the happiest animal in the world in 2013. Thanks to its smile, this creature became the protagonist of thousands of photos taken by tourists who visit the land Down Under.

The quokka, or setonix brachyurus as it is known by its scientific name, lives in southwestern Australia in the Perth area. Its natural habitat is Rottnest Island, where tourists visit these animals and take adorable selfies.

The first visitors to the island believed that it was a giant rat, so the meaning of the island's name is "rat nest." But after several investigations, it was discovered that it was a marsupial of the family of kangaroos. The main difference is that it is the size of a cat. 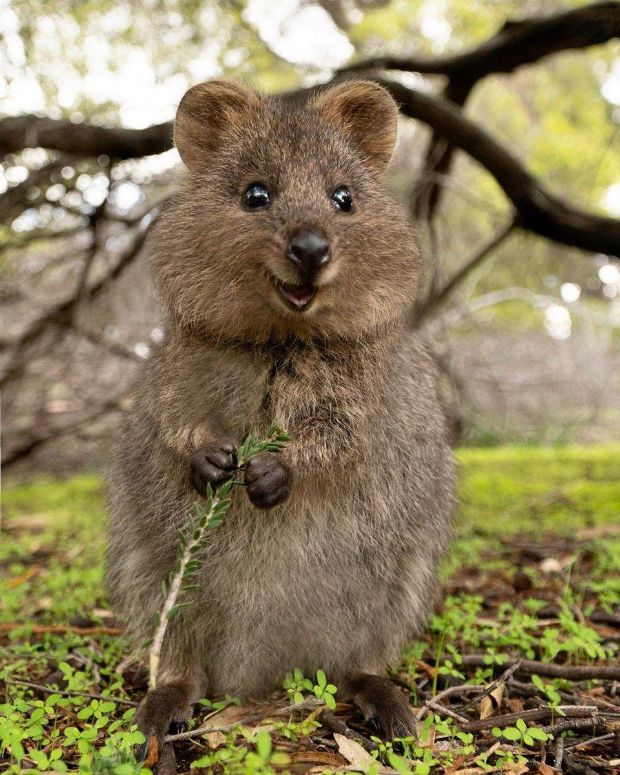 It measures between 40 to 55 cm in length, with grayish-brown fur, round ears, and a small tail. It certainly has biological characteristics that arouse our curiosity towards them. They are marsupials that prefer humid areas and warm places near natural tributaries such as forests or jungles.

They hydrate, above all, from the leaves they eat. These adorable creatures have a herbivorous diet, based mainly on fruit leaves and berries, and can climb trees to find food.

Another fascinating thing about this species is the way they eat. They do not chew their food. Instead, they swallow it and regurgitate it.

The Trick To The Best Quokka Photo Is Patience 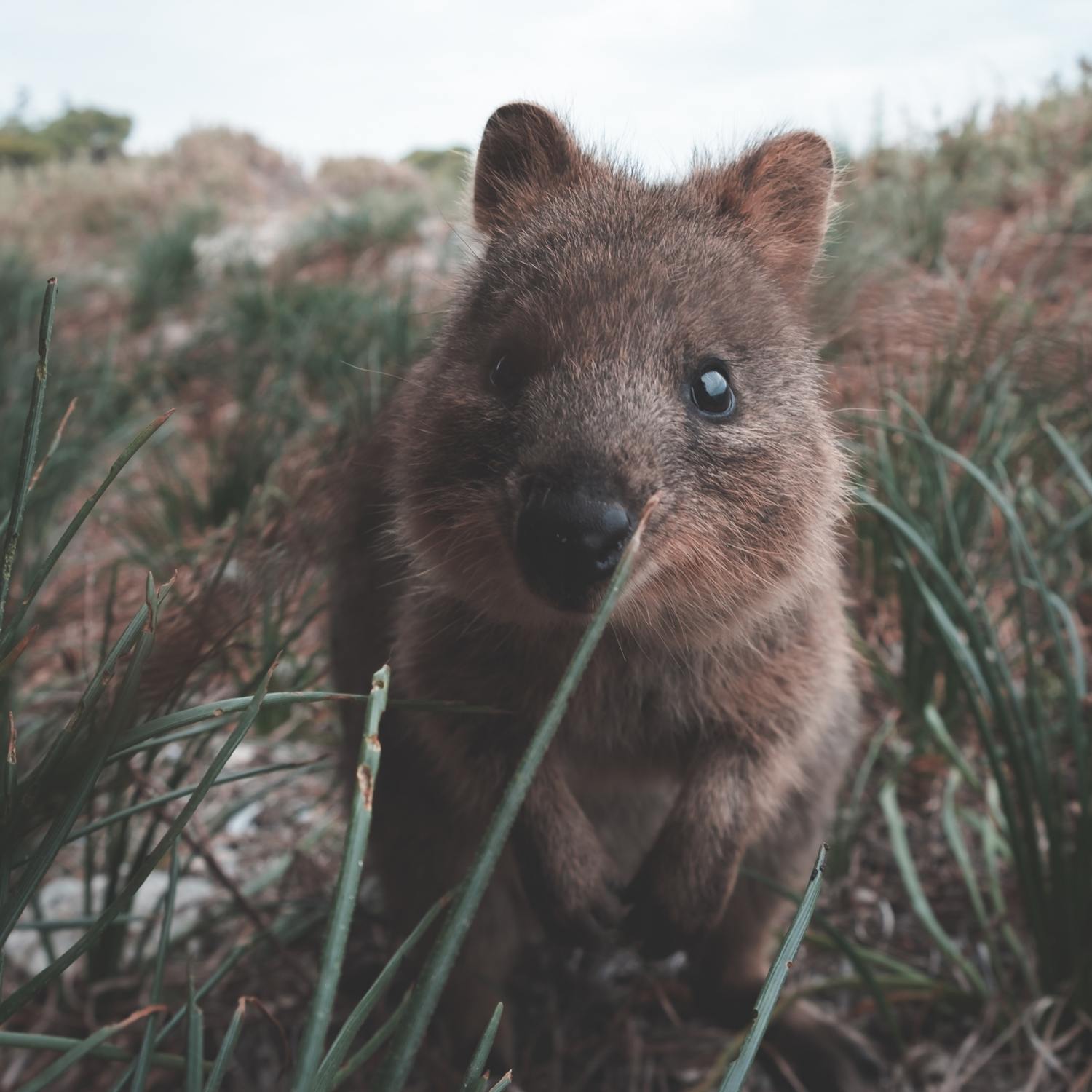 The number of quokkas on the island ranges between 8,000 and 12,000 specimens. It can be seen that it is a small number, and although the gestation period lasts a month, the females can only have two offspring per year. That is why the chances of the species growing fast are slim.

Like kangaroos, female quokkas have a pouch where they nurse their young for six months. As marsupials, quokka mothers raise their young in the pouch for 11 months before becoming independent.

Although most usually live only five years, there are cases in which they can reach ten years of life with optimal conditions.

They build tunnels between the grasses that they use to search for food and to escape from predators.

They are nocturnal, so having an approach with them is sometimes difficult. You have to be patient and wait for them to appear during the day.

Australian adventurer Allan Dixon calls himself the "animal whisperer," He has posted numerous photos on his Instagram where he appears to be posing with different animals. The Australian advises that to get a selfie with a quokka, you have to be patient and wait for the animal to approach.

On many occasions, they are afraid of the person, so, as an instinct, they attack.

The Reason Why The Quokka Is So Popular On Social Media 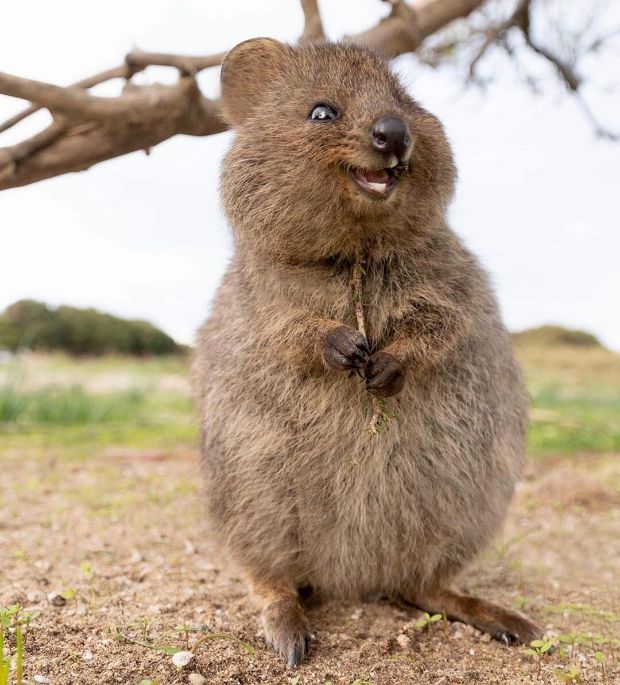 The reason why many want to meet this Australian animal is because of its friendly nature. Instead of being fearful and running away from people, they are curious and usually want to interact with them.

Their inquisitive and sociable character allows them to approach each other and the tourists they meet on their path. They are pleasant and friendly with humans since they do not have as many predators, so they do not always have to be on alert and defend themselves.

Something that gives them a nice appearance and makes humans eager to meet them is their smile. This little animal can transmit joy and happiness with what appears to be a smile on its face.

Its narrow snout and large cheeks, along with its pleasant nature, make it look happy on many occasions, which is why it has the title of the happiest animal in the world. However, the reality is that we cannot know if the quokka feels happy or sad. Its characteristic gesture is simply a physical aspect of evolution and is not linked to any emotional implication.

The quokka might likely be sad while still flashing its cute smile.

Happiness is what this animal transmits when you see it. Although it has a unique smile, it is nothing more than a process of biological evolution and has nothing to do with emotion. Yet, it does provoke emotion in us.

The Quokka: A Selfie Lover 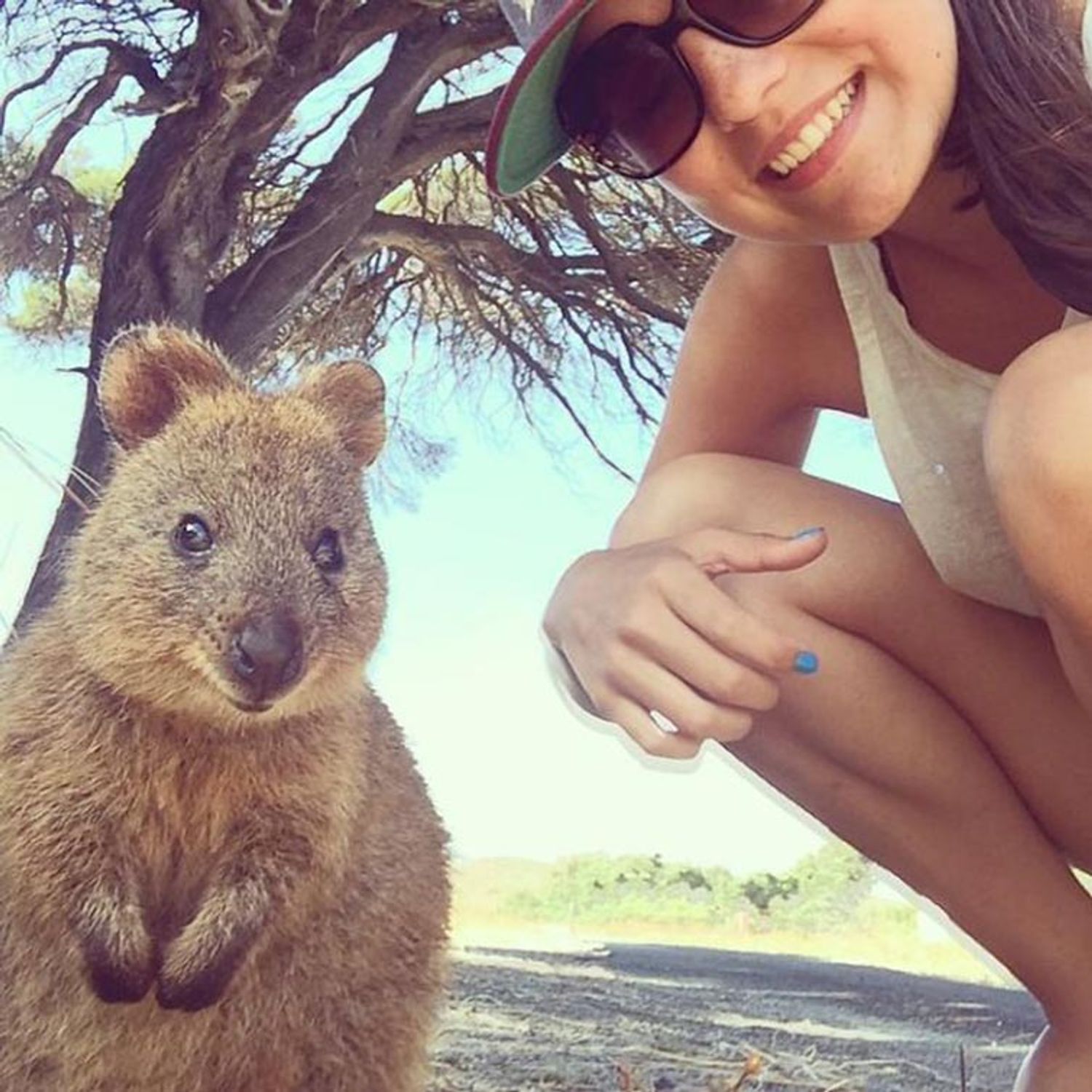 It is one of the most photogenic beings in the animal world, and it seems that it loves selfies.

The quokka is quite popular on Instagram, and it has the quokkaselfie hashtag. Its popularity grew quite a bit, and, to this date, there are more than 33K posts.

In 2015 after the Australian actor Hugh Jackman took a photo of it and uploaded it to his social networks. The image went viral and aroused the curiosity of many who wanted to meet the quokka. 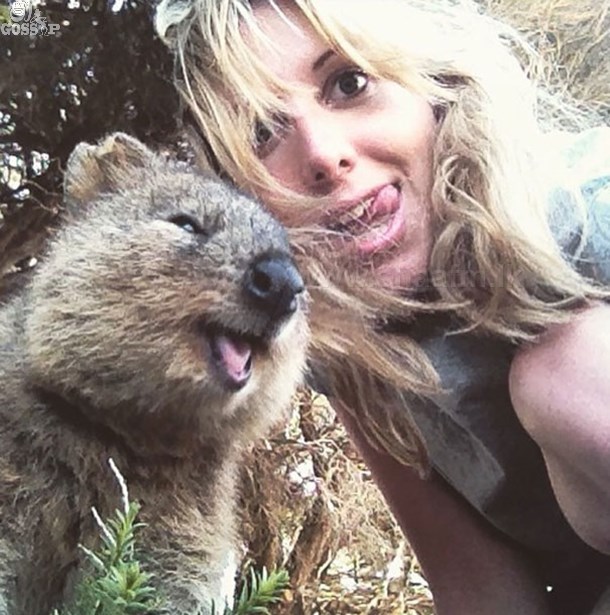 The animal became so popular that different celebrities have posed with it, including actor Chris Hemsworth, tennis player Rafael Nadal, singer Shawn Mendes and many more.

This tender marsupial has moved every animal lover on the planet.

Quokkas In Danger Of Extinction 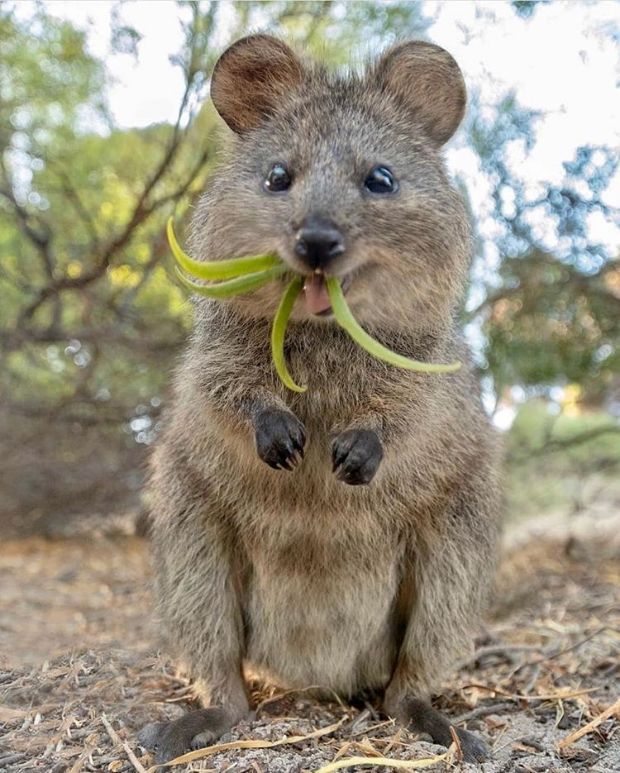 Not everything is joyful around this animal. The species is in danger of extinction, and its conservation is becoming more and more difficult.

The reasons for reducing quokka specimens are the predators in their habitat, such as foxes and dingoes, deforestation, and the preparation of large land to build buildings. 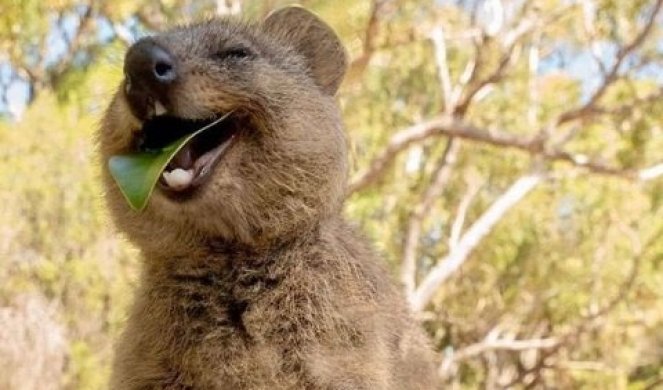 It appears on the Red List of the International Union for Conservation of Nature (IUCN) as a vulnerable species. Since interaction with people has become more common, to conserve the species, the Australian government prohibits capturing these animals by imposing fines ranging from 300 to 2,000 Australian dollars to those who do so.

Although it is true that just seeing this cute marsupial makes you want to hug it, it is still a wild animal. If at any time it feels threatened, it can try to defend itself. Therefore, it must be respected, not carried to another place outside its habitat or be fed.