The witness reported that a UFO made a landing at the top of Roraima, which doubles as an "airport," and resulted in a widespread power outage in the surrounding area.

Mount Roraima, known for its unique geology and mysterious phenomena, has become a key location for investigating UFOs and paranormal activity.

Mount Roraima, also known as Tepuy Roraima, Cerro Roraima or simply Roraima, is situated on a plateau at the border of Venezuela, Guyana, and Brazil. While some believe that its formation is solely a natural occurrence, its height and flat peak have led to theories that it could be an ancient artificial construction.

Could Mount Roraima be built artificially?

Previously overlooked by researchers, Mount Roraima has gained significant attention in recent years as a key location for studying UFO phenomena. Its unusual shape, which appears to be carved out of a single massive piece of rock, has fascinated researchers for decades.

Mount Roraima's walls are vertical, surfaces are smooth and sides are straight. The vertical walls reach a height of 400 meters, and sloping corners with sharp protrusions make it difficult to access the top. The mountain range measures 170 meters, and the total height is 1,150 meters.

The mythology of Roraima 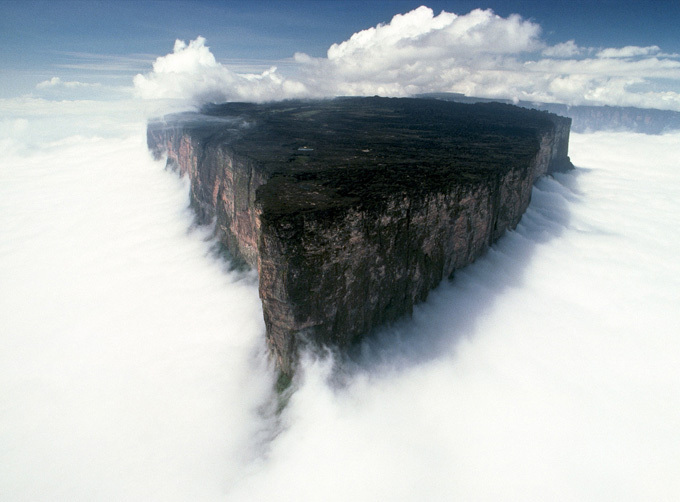 The Pemón, Capone, and other indigenous peoples of South America have a rich mythology in which Mount Roraima plays a significant role, particularly in their creation story.

In Pemón language, "Rorai" means "greenish-blue" and "ma" means "large", thus Roraima means "The great blue-green mountain". According to Pemón beliefs, the mountain is a remnant of a powerful tree from which all food in the world originated.

A legendary hero, known as Makunaina, meaning "Work at night" or simply referred to as "God" or "Great Spirit", chopped down the tree, causing a massive flood when it fell to the ground.

Mount Roraima has many stories surrounding it. In addition to local legends and myths, tourists from around the world have reported strange events. One such event was witnessed by Delia Hoffman de Mier and others in the town of Santa Elena de Uairén, who reported a "third-degree" contact.

Delia Hoffman de Mier claims that a UFO landed at the top of Roraima, which doubles as an "airport," and resulted in a widespread power outage in the surrounding area. The incident was even investigated by the US Congress, which was looking into the mystery of "Unidentified Flying Objects" (UFOs).

The incident was documented in the Project Blue Book, which was responsible for collecting all UFO and extraterrestrial sightings that NASA couldn't explain. Many other unusual events have been reported by various expeditions, tourists, and researchers who visited Mount Roraima.