You have to be innovative to stay at the top of your game, and McDonald's knows this very well. That is why, over the years, they have come up with many new menu items to keep their customers interested in what they have to offer.

However, while some of their products are an instant hit, others have been total disasters. So, here are some of the worst products McDonald's has ever put out over the years.

McSalad Shakers was supposed to be a healthy menu option for McDonald's customers. The cups were meant to be shaken to offer evenly distributed dressing.

Unfortunately, customers did not like the salad cups much, and they were taken off the menu in 2003 after being introduced in the year 2000. The company decided to go with salad bowls as usual. 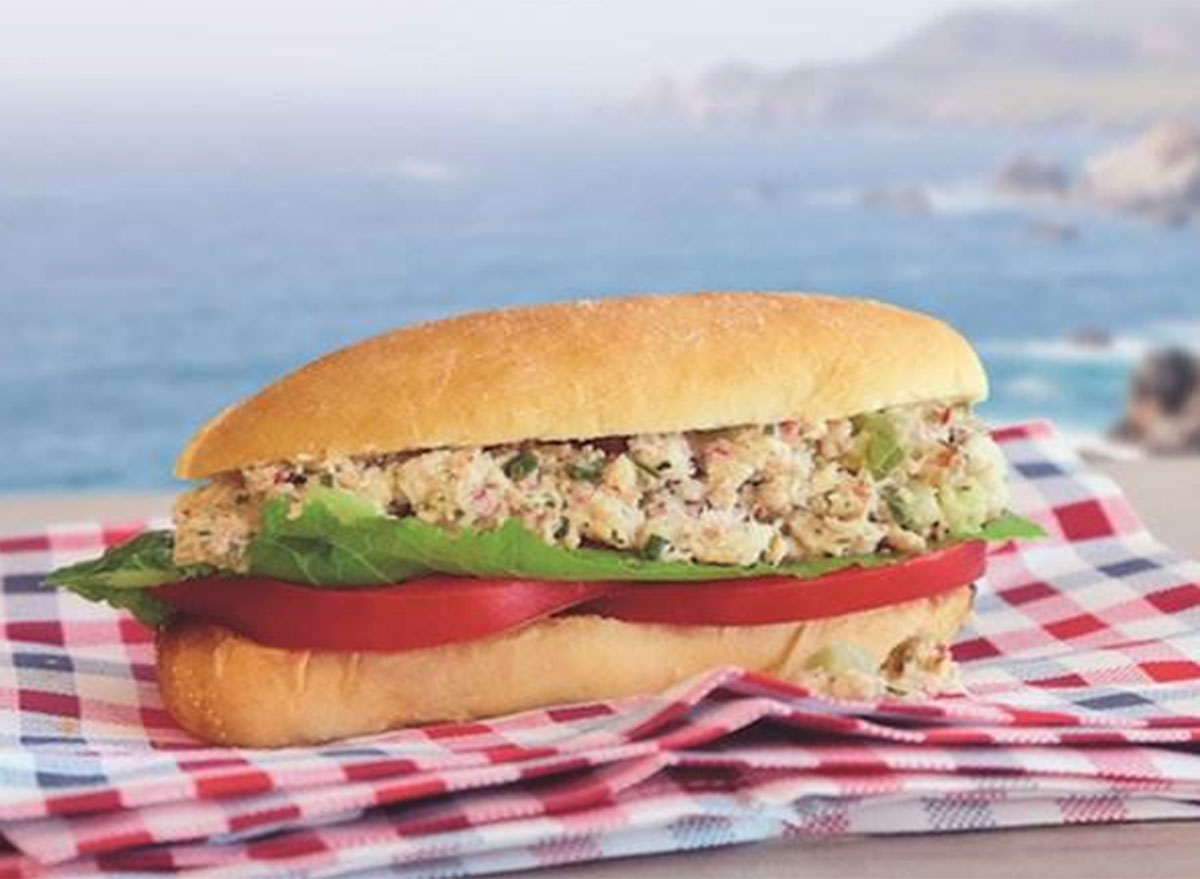 When McDonald's introduced McCrab, crab cakes were incredibly popular in Delaware, Maryland. Unfortunately, although there was apparent demand for this dish, McDonald's was no match for local food joints that offered this product and took it off the menu.

The Big N' Tasty burger was introduced in 1997, just when Disney's California Adventure theme park opened. This burger was not exactly a failure, but it had to go to make way for newer things. 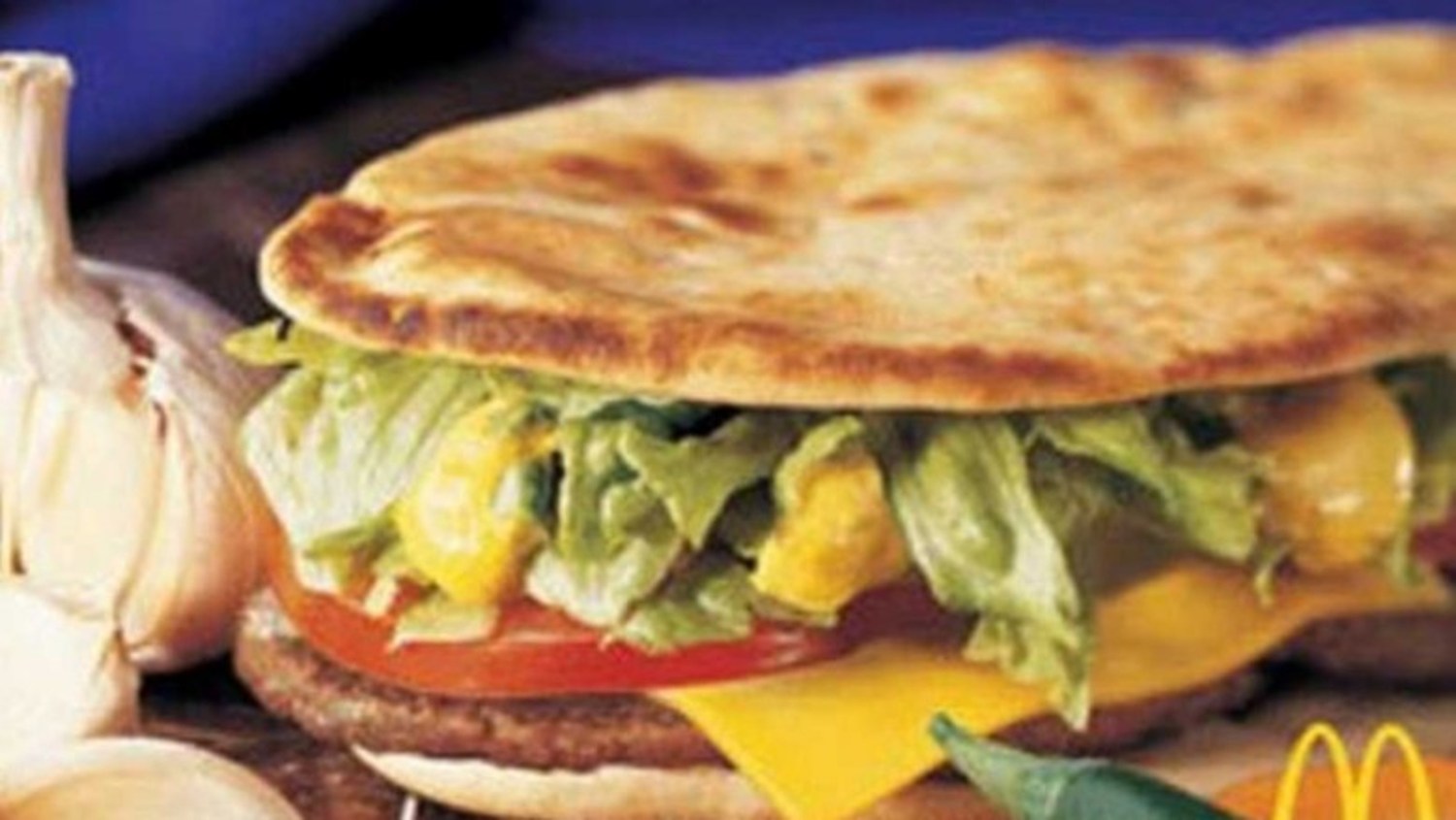 McDonald's shot itself in the foot by introducing the McAfrika burger when there was widespread famine in the continent. Most people accused the restaurant chain of making the product in bad faith.

In Norway, criticism for the McAfrica was so intense that the company had to set up donation boxes intended to help with famine relief. 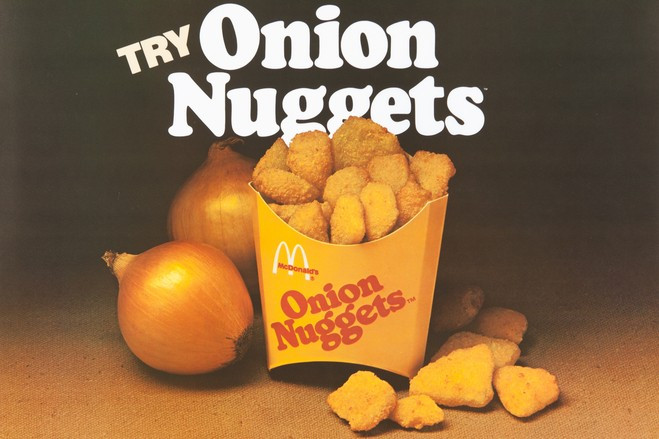 As the name suggests, this dish consisted of fried onions which were supposed to serve as an alternative to French fries. The menu item was introduced in the 70s and removed within the same decade, and it has never made a comeback.

That is why many people within the company might not even know about it. 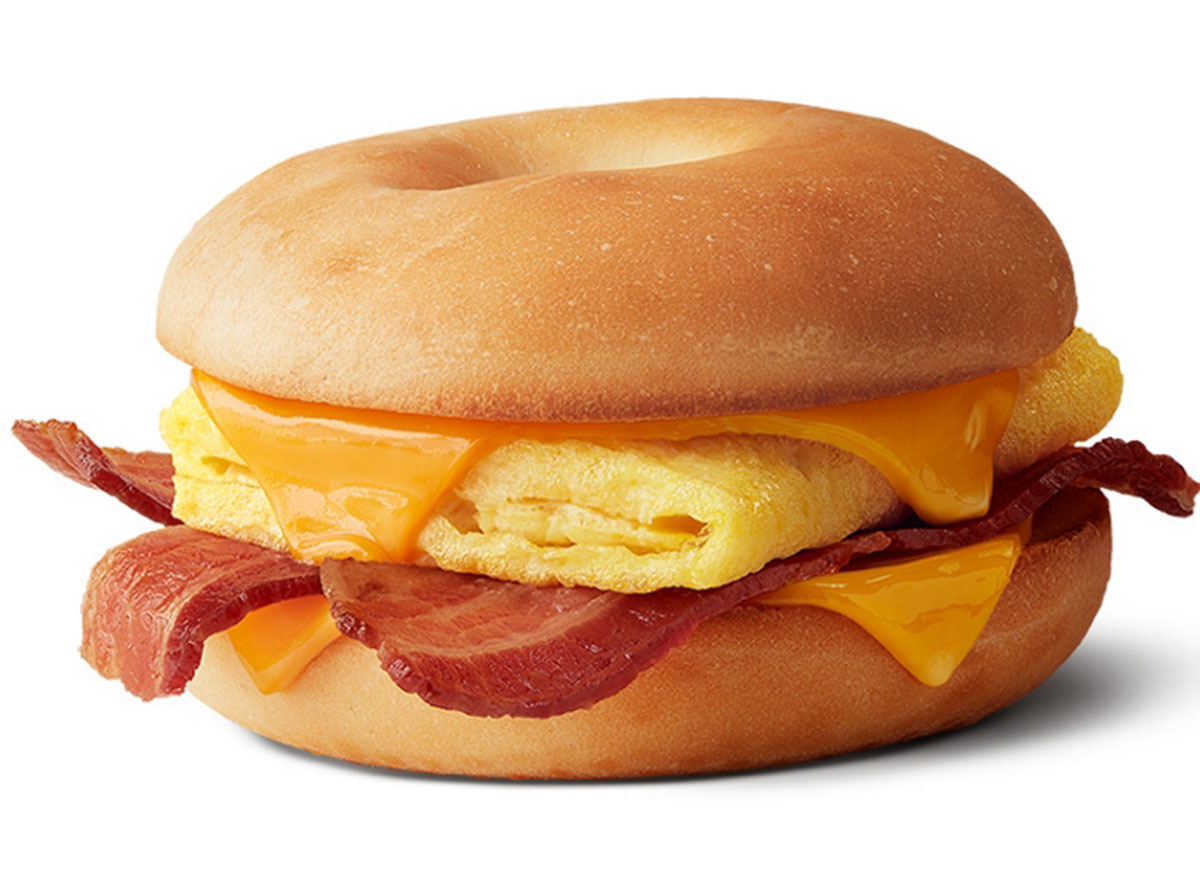 This menu item was just ham, cheese, and egg on a bagel. It also had Spanish spices. However, soon afterward, it was done away with. 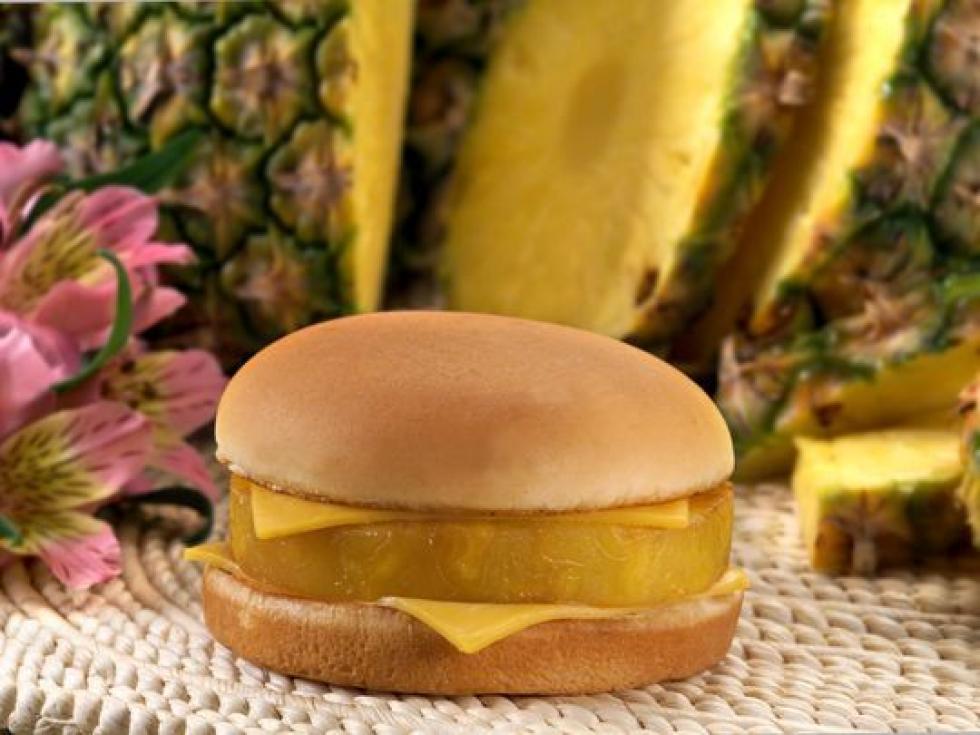 Surprisingly, this culinary failure was created by Ray Krok, who is credited with turning McDonald's into a massive franchise.

This burger was introduced in 1963, and Roman Catholics were its target market as they were not allowed to eat meat on Fridays. Instead of meat, the burger had pineapple, and it was a huge failure.

McStuffins is a failed menu item from the 1990s. The item was a flop as soon as it was introduced, and it disappeared almost immediately, never to return. 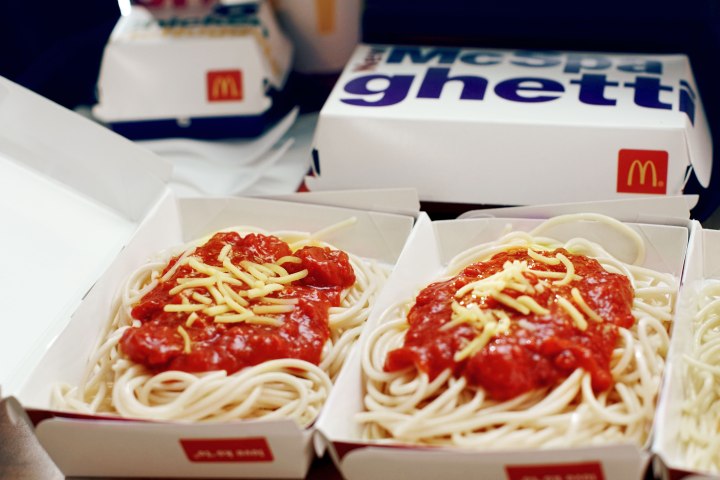 In the late 70s, McDonald's made the mistake of trying to serve spaghetti. Fans of the food establishment were not amused.

Therefore, soon after it made its debut, it was kicked off the menu. However, it turned out into a hit in the Philippines, where it is served beside the fried chicken. 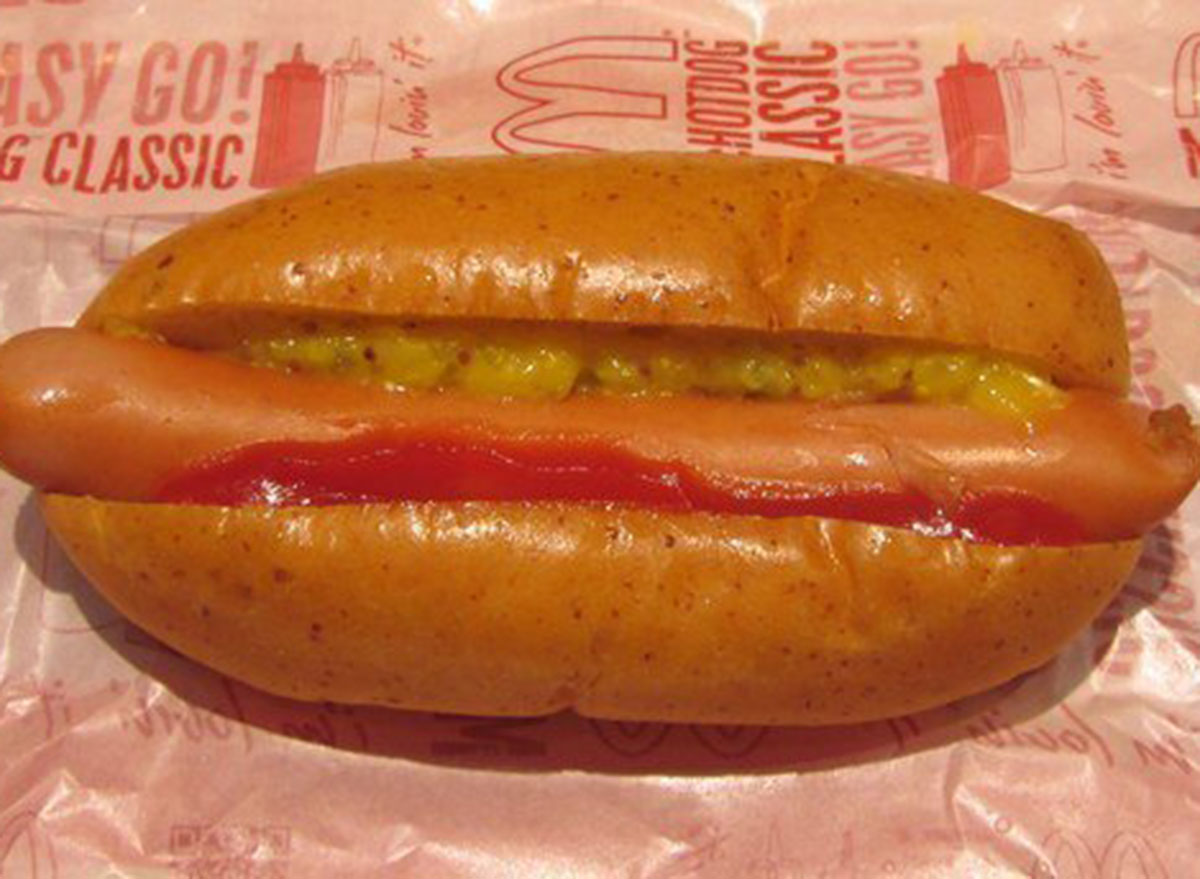 Hot dogs were introduced at McDonald's in the late 1990s, and it turned out to be a huge mistake. Those who came up with this idea should have heeded Ray Kroc's words. When he was the company's CEO, he banned the selling of hot dogs regardless of public demand.

According to him, hot dogs were unhygienic. Over the years, some McDonald's restaurants have tried to reintroduce the meal, but it never catches on.

In 1993, McDonald's gave patrons the option of getting super-sized drinks and fries. However, this stopped after Morgan Spurlock created the documentary Super Size Me, in 2004 showing what consuming excess McDonald's food can do to you. 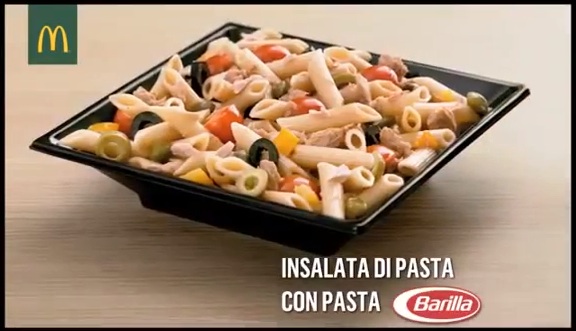 The company started by testing pasta in the South in 1989 before rolling it out across New York. However, in the end, people associated McDonald's with burgers, not pasta.

Therefore, the product experienced low demand that saw its removal from the menu. A recent attempt to reintroduce it also backfired, and the meal was again abandoned due to low demand. 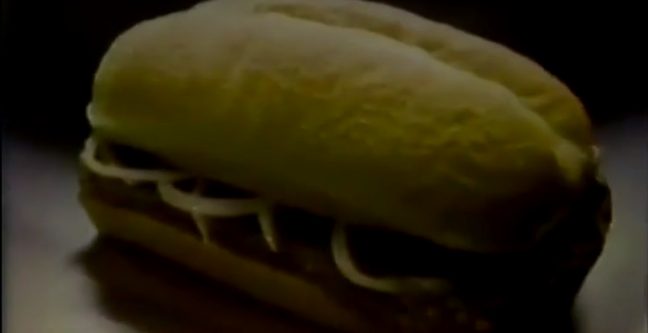 McDonald's tried to give Arby's a run for its money by introducing the fried roast beef sandwich in 1968.

However, that turned out to be a bad idea after it figured out that the meat slicer required to prepare this meal was not cost-efficient. 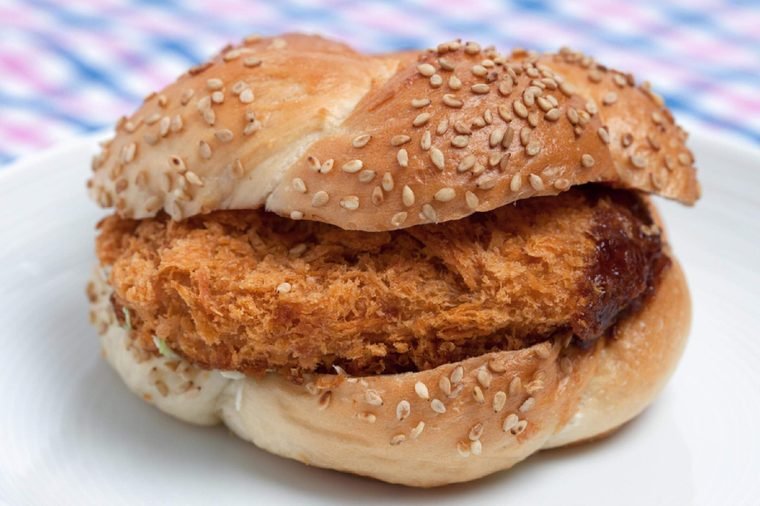 This terrible McDonald's burger was meant for the Japanese market. It failed dramatically, and any number of reasons could have caused this.

For instance, it was served on a bed of cabbage, and it contained fried Macaroni and mashed potatoes. The name might not have helped its chances of success.

One of the main issues with this burger was that men did not like it. It sounded like the burger version of Diet Coke.

The taste was not that great either, despite the ad saying it was "low fat but tastes good." Instead of fat, they used seaweed mixed with water, which gave it an awful taste that made it a flop.

Although Michael Jordan is one of the most famous athletes ever, the McJordan Special ended up as a failure, although it had a few fans. The burger featured a beef patty, barbecue sauce, and bacon.

The Big 33 was practically the same burger, but it was named after Larry Bird.

According to McDonald's, Arch Deluxe was a "hamburger for adults." The taste apparently reflected sophisticated flavor adults would love.

The ad did not do the new product any favors as it featured kids with disgusting looks on their faces after having a taste of this burger. After this disaster, which included a $100 million campaign, some management changes were also introduced.

Apparently, this sandwich was meant to go with the Onion Nuggets, but it never made it past the testing stages. The dish was introduced in 1979 but was eventually done away with.

McDonald's once tried to enter the pizza business, but it was too bland to catch on. In any case, anyone looking for a pizza went to a pizza restaurant as usual.

This turned out to be an expensive mistake as the company was left dealing with pricey pizza ovens they didn't need and wider drive-through windows they didn't actually require.

Eventually, they abandoned and forgot about the McPizza.

This epic failure was meant to be a meal friendly to kids visiting McDonald's for a bite. However, the burger had some fans by the time it was phased out, but it still had to go.

To begin with, this McDonald's creation was strangely packed. The burger was packaged in a two-sided container with the top half of the bun packed separately from the bottom half, which contained lettuce, tomato, cheese, pickles, and sauces.

So, the fact that people had to put this burger together was a distinct disadvantage. Fortunately, McDonald's redesigned the burger as the Big N' Tasty.

McDonald's thought chicken fajitas would be a success back in 1993. They claimed that the fajitas offered a "taste of Mexico... without the sunburn."

There are a lot of things wrong with this burger, including the fact that it was expensive and looked like someone threw some mess on a bun.

Some Canadian franchises still have the burger. Unfortunately, even if you wanted a lobster, this would not be the lobster you would seek.

Might Wings was a product launched in 1990. However, they did not sell well despite the fact that the company had set up about 50 million pounds in stock, believing they would sell like hotcakes.

In the end, McDonald's had to get rid of 10 million pounds of leftover wings.

One of the main problems with this product was the pricing and the slightly spicy profile.

McDonald's made history when it launched the Angus Burger in 2006 since it was the first burger with Angus beef to sell at a fast-food chain. It was quite expensive, and in 2013, it was phased out since people could easily get four to five burgers for the price of one Angus burger.

Even though McDonald's is a global success, it has still suffered some setbacks along the way, as these failed dishes help prove.