In 1990, during a flight, the cockpit window detached and the pilot, Timothy Lancaster, was partially ejected from the plane. The cabin crew held onto his legs to prevent him from being completely sucked out, and the plane was able to land safely.

Miracles are not limited to just movies; they can happen in real life as well. One such miraculous event occurred on British Airways Flight 5390, where the pilot's survival is a testament to the unpredictable and extraordinary nature of life. 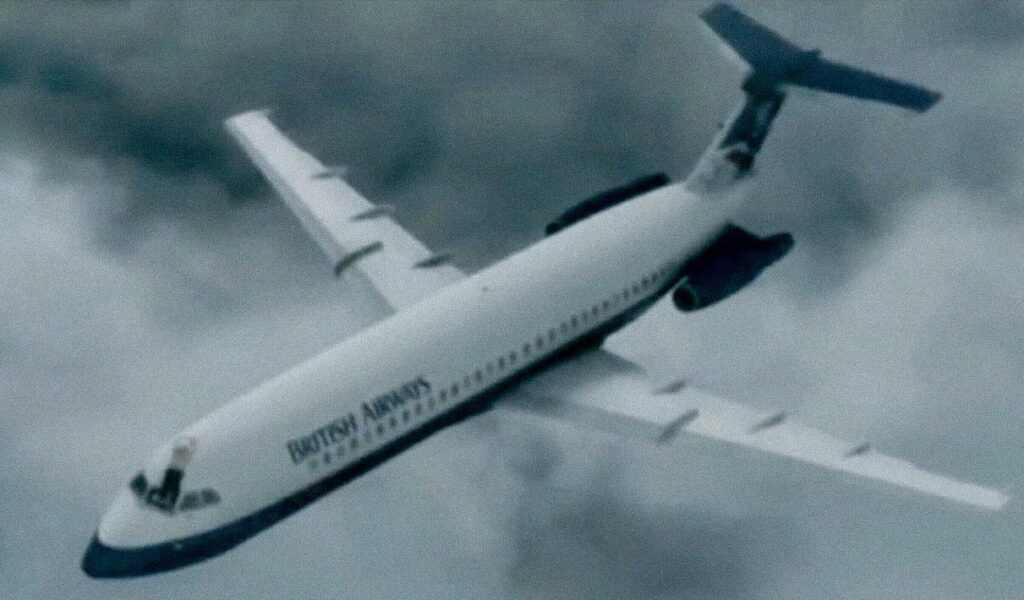 In 1990, a British Airways flight bound for Malaga, Spain took off as scheduled. However, an unexpected event occurred mid-flight when one of the cockpit windows blew out at an altitude of 5,000 meters. The pilot was partially sucked out of the window, but miraculously survived the ordeal. It was a dramatic and life-changing event for him. 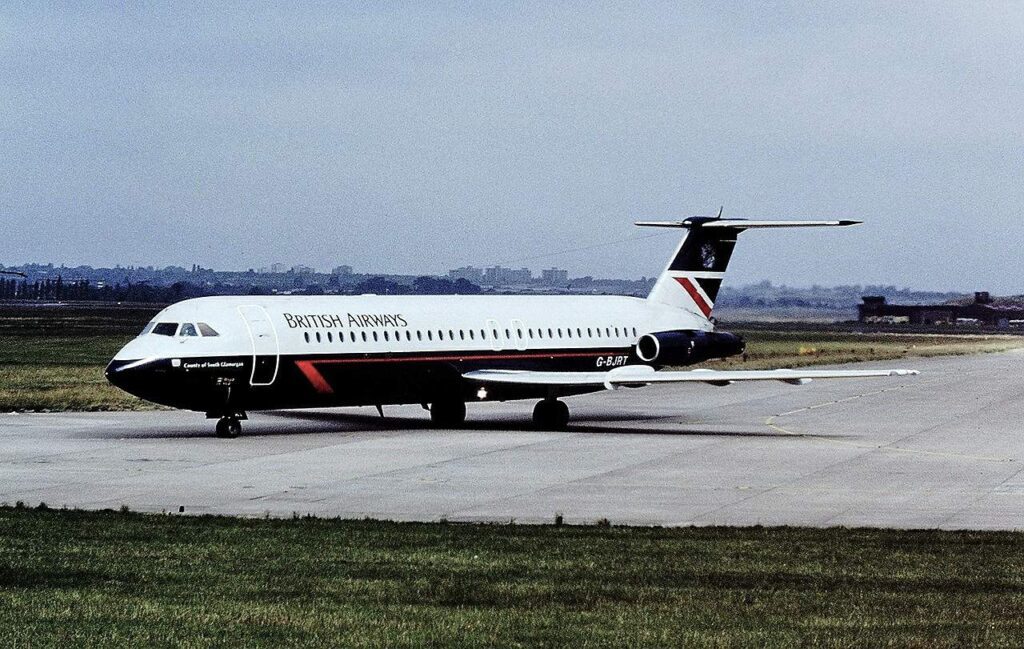 On June 20, 1991, a British Airways flight from Birmingham to Malaga experienced an unusual incident when one of the cabin windows broke, causing Captain Timothy Lancaster to be partially sucked out of the window due to depressurization. Despite this, he miraculously survived the accident, thanks to the help of the flight attendants and the skill of the co-pilot, Alison Atchison.

Captain Timothy Lancaster experienced a terrifying accident while flying a commercial aircraft. He was exposed to winds of over 600 kilometers per hour and temperatures near -17 °C for a prolonged period of 22 minutes.

At an altitude of 17,000 feet (approximately 5,000 meters), while the flight attendants were serving drinks and the pilots were preparing for breakfast, the side windshield of Captain Lancaster's cockpit suddenly ruptured. The sudden decompression caused the plane to jolt and the cockpit door to rip off, pulling the pilot's body out of the window. However, his legs remained tucked under the controls, preventing him from being completely ejected from the plane. 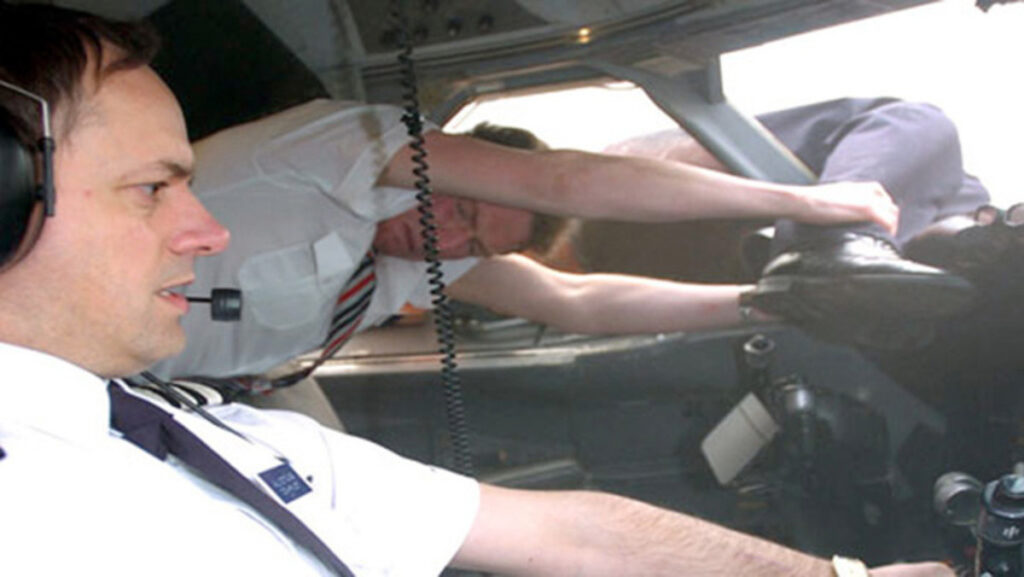 One of the crew members, Nigel Ogden, noticed the situation and was able to grab onto Captain Lancaster, who was being pushed against the fuselage due to the strong wind and high speed. He was also starting to freeze due to the extremely low temperatures.

After a few minutes, Ogden, who was still holding onto Lancaster, was starting to develop frostbite and was becoming exhausted. The chief steward, John Heward, and air steward, Simon Rogers, then took over the task of holding onto the captain. Despite their best efforts, it was impossible to get Lancaster back into the cockpit due to the strong wind and high speed. 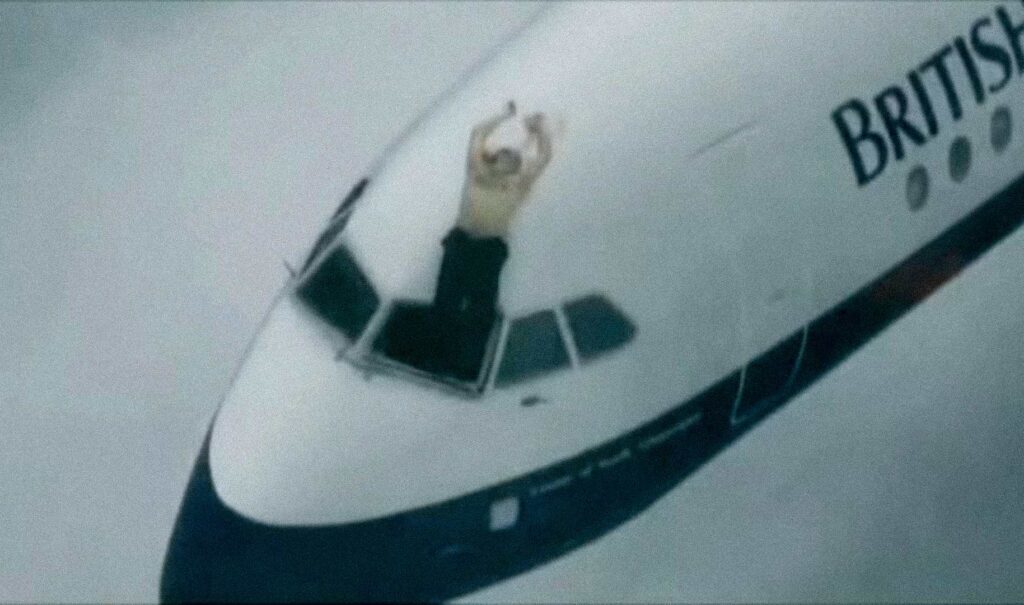 By this point, Lancaster had moved several inches further out of the cockpit and his head was striking the side of the fuselage repeatedly. The crew believed him to be dead, but co-pilot Alison Atchison instructed them to continue holding onto him, out of fear that releasing him could cause him to collide with the left wing, engine, or horizontal stabilizer, potentially causing further damage.

Co-pilot Alastair Atchison immediately alerted the control tower about the incident and began emergency landing procedures. Without waiting for clearance, he initiated descent, even though it risked crossing the path of other planes. Atchison was able to hear clearance from air traffic control to land at Southampton Airport in the UK.

The flight attendants managed to release Lancaster's ankles from the flight controls while still holding onto him. The plane was able to land safely at Southampton Airport at 08:55 local time (07:55 UTC) and the passengers were able to disembark using the boarding steps.

Despite spending nearly 22 minutes exposed to winds of over 600 kilometers per hour and temperatures near -17 °C, Captain Timothy Lancaster was rescued and treated, and ultimately survived the ordeal. He made a full recovery within weeks and returned to work after less than five months.

The cause of the accident

Further investigations revealed that the windshield rupture was caused by the use of bolts that were thinner and smaller than the standard size, which were unable to withstand the pressure difference between the cabin and the exterior. In other words, the accident was a result of inadequate maintenance.

First Officer Alastair Stuart Atchison, cabin crew member Susan Gibbins, and Nigel Ogden were recognized for their actions and bravery during the incident, and were awarded the Queen's Commendation for Valuable Service in the Air. Atchison was also honored with a 1992 Polaris Award for his skill and heroism during the emergency landing.

After reading about the miraculous survival of Captain Timothy Lancaster, you may also be interested in learning about the remarkable story of Juliane Koepcke. She was the sole survivor of a plane crash, falling 10,000 feet and surviving with injuries. It's an incredible story of survival and determination.