We are always intrigued by people who are in some way different. With such a vast global population, it is not easy to stand out today. Yet, some individuals have such remarkably odd bodies that you cannot help but stare. Humans are perhaps most interested in very tall people.

There are tales of mythical giants throughout history. Those who read them continue to be entertained, but much doubt surrounds the accuracy of the claims. Nobody ever questions the size of one man named Robert Wadlow. Robert started life typically as an average-size boy in a small town in 1920's America. 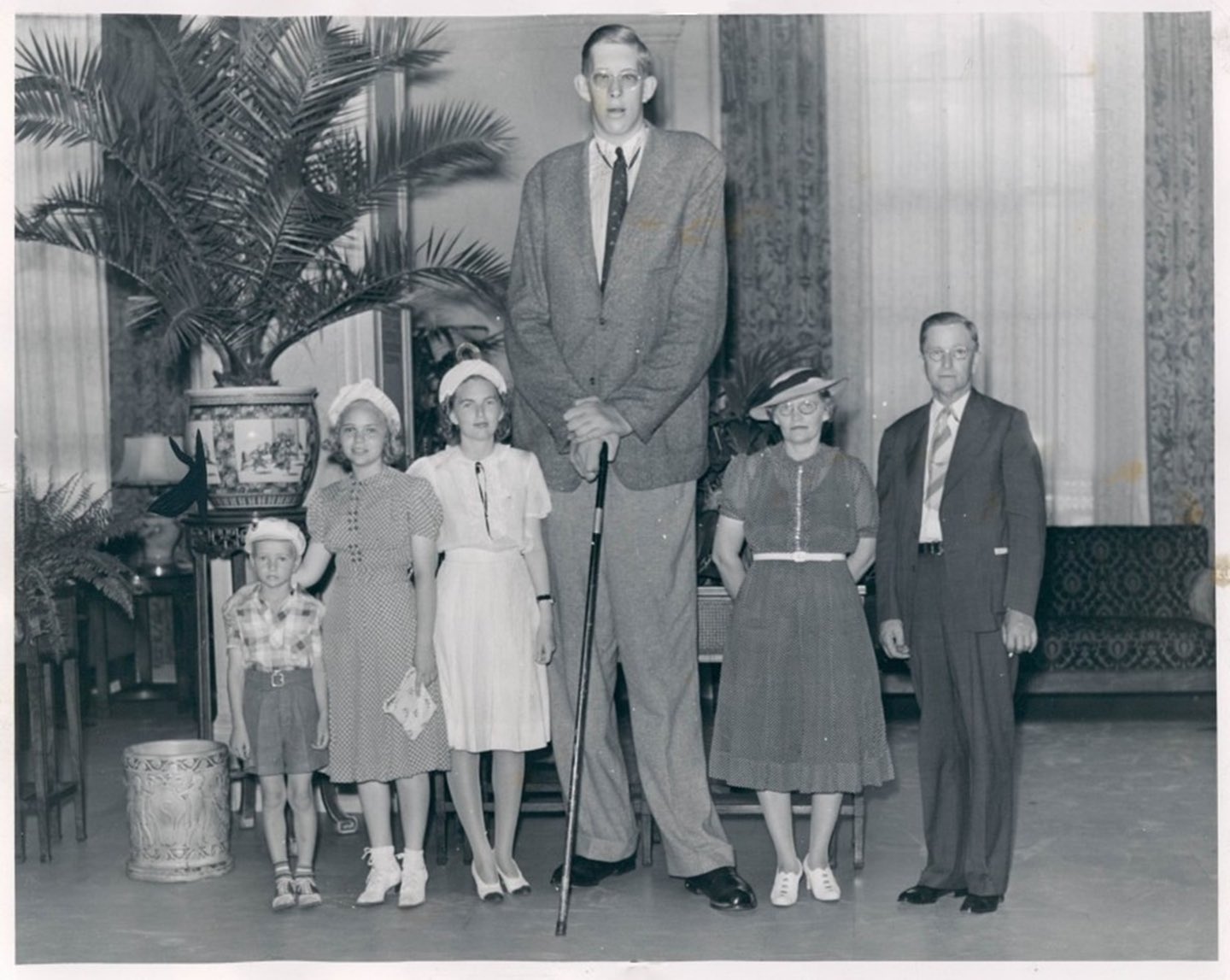 The growth that his body underwent over the next two decades made Wadlow a permanent feature in the record books. He just kept getting bigger and never stopped growing until his premature death. By this time, he had unquestionably become the tallest human in recorded history at 8 ft 11 in (2.72 m). Unsurprisingly, nobody since has reached anywhere near this height.

Robert Wadlow was more than just tall. He led a short existence that was both interesting and challenging. Although his enormous size made most ordinary tasks a struggle, he tried to be as common as possible. Now we shall look more closely at the rise and eventual fall of this modern-day giant. 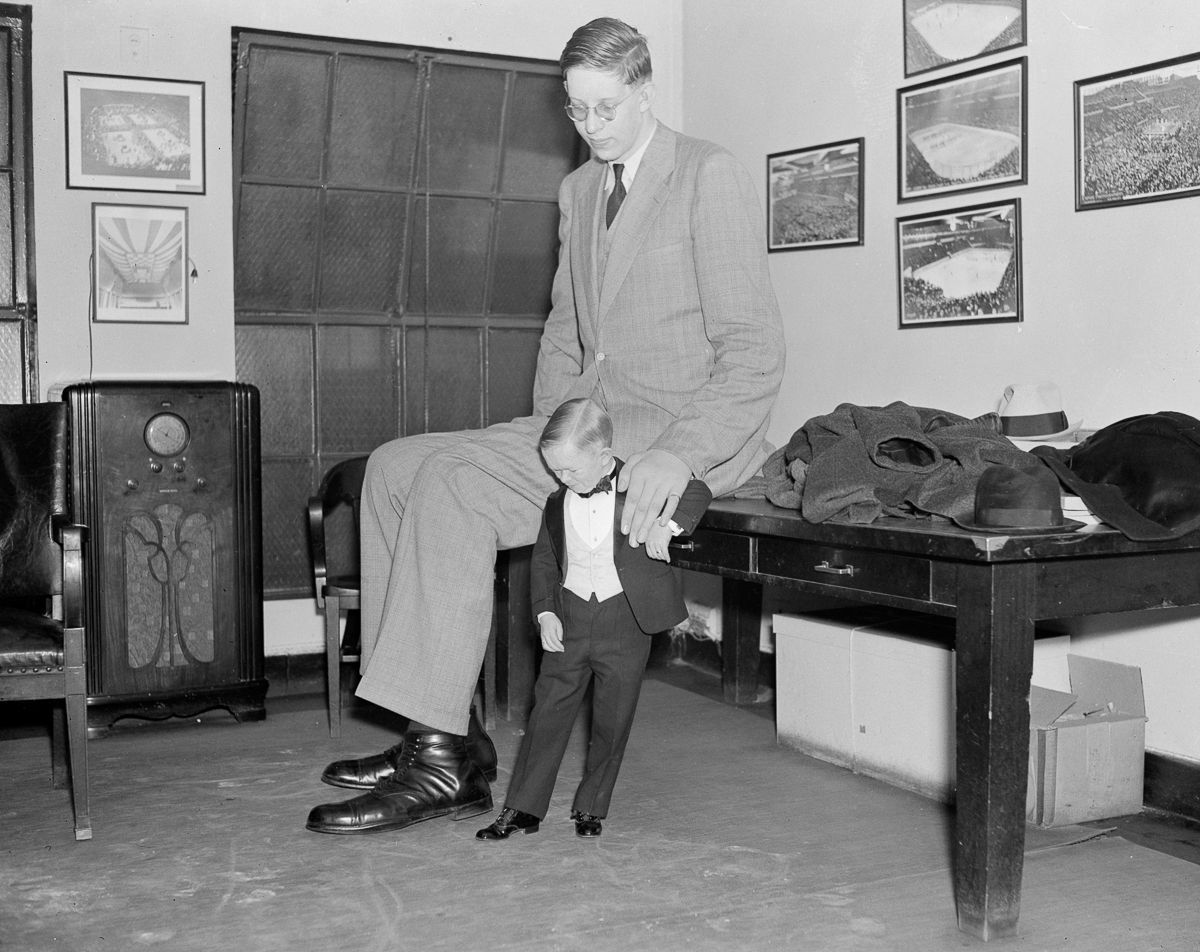 On February 22nd, 1918, Robert Wadlow was born in Alton, Illinois, USA, into a family of five children. As a baby, nothing about him was unusual. He weighed just over 8 lbs (3,8kg). His siblings were all younger than him and grew to average sizes. After his birth, though, Robert's parents watched in awe as his body size multiplied.

By his first birthday, Wadlow stood 3 ft 6 in (1.07 m) ― as large as a typical 5-year-old. When he reached five years himself, he was already taller than his grandmother. His stature had increased to over 5 ft 6 in (1.69 m) while his weight was 140 lbs (64 kg). It was at this stage when he started to attend elementary school.

At 7, Robert Wadlow reached the height of an average adult male (5 ft 10 in/1.78 m). A year later, he reached 6 ft (1.83 m) and surpassed his father's height of 5 ft 11 in. At around this time, Robert was so strong that he could lift and carry his father upstairs in his house.

The Cause Of Robert Wadlow's Rapid Growth 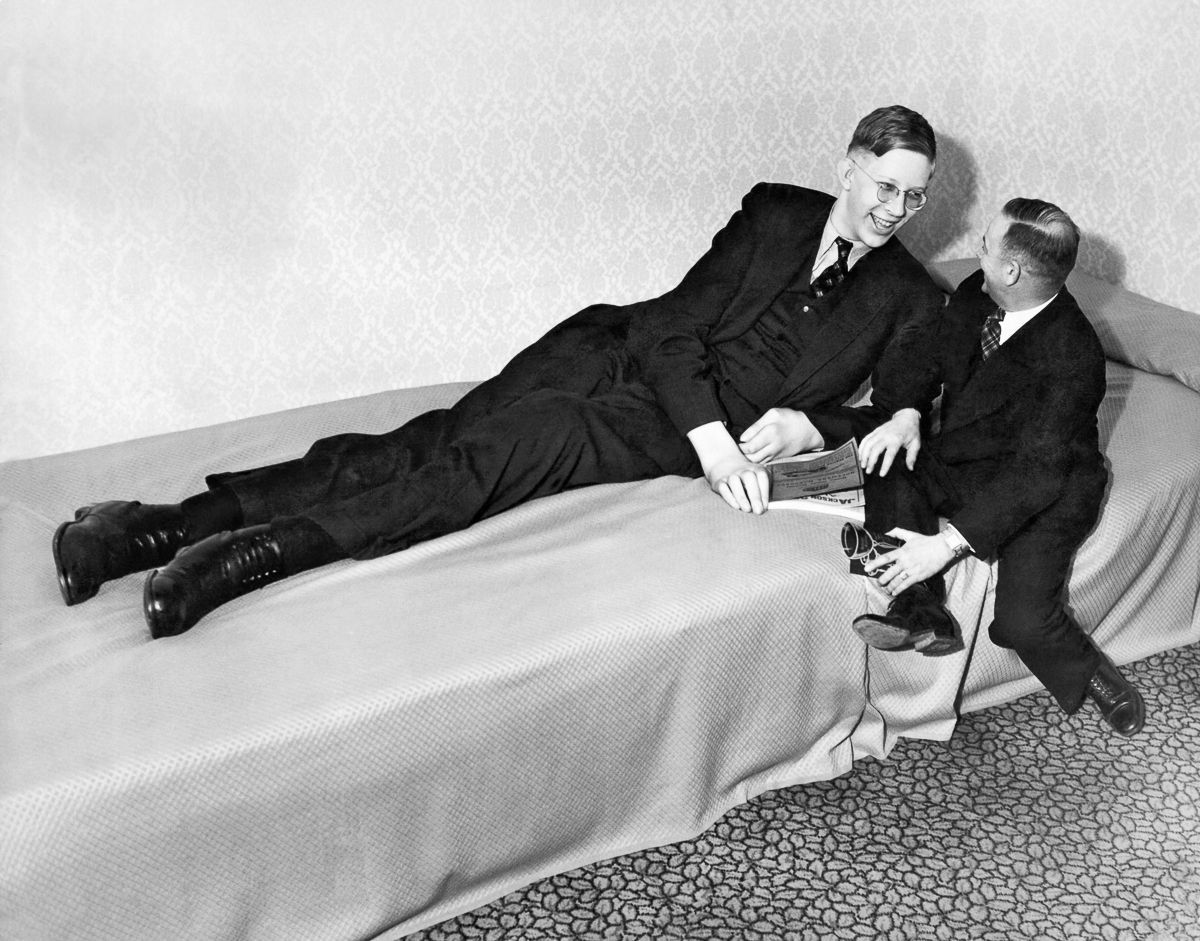 It was not before Wadlow passed 12 years of age (and 7 ft in height!) that doctors figured out what was making him so tall. The cause was acromegaly, which consists of a tumor in the brain's pituitary gland. The consequence of this disorder is the excessive production of growth hormones in the body. This occurs even after the age when human growth stops. It is not genetic either, which explains why the rest of his family was nowhere near his size.

In those days, surgery to remove the tumor carried a high risk and was not guaranteed to succeed. Robert's parents, therefore, decided to avoid surgery and let his body develop on its own. Had Robert Wadlow been born decades later, successful surgery would likely have halted his excessive growth.

Indeed, this is what happened to the tallest living man. Sultan Kösen from Turkey received treatment and medication for this same condition between 2010 and 2012. It worked, and Kösen's height is now fixed, though he still stands an astonishing 8 ft 3 in (2.52 m) tall.

Wadlow Tried To Fit In Whenever He Could 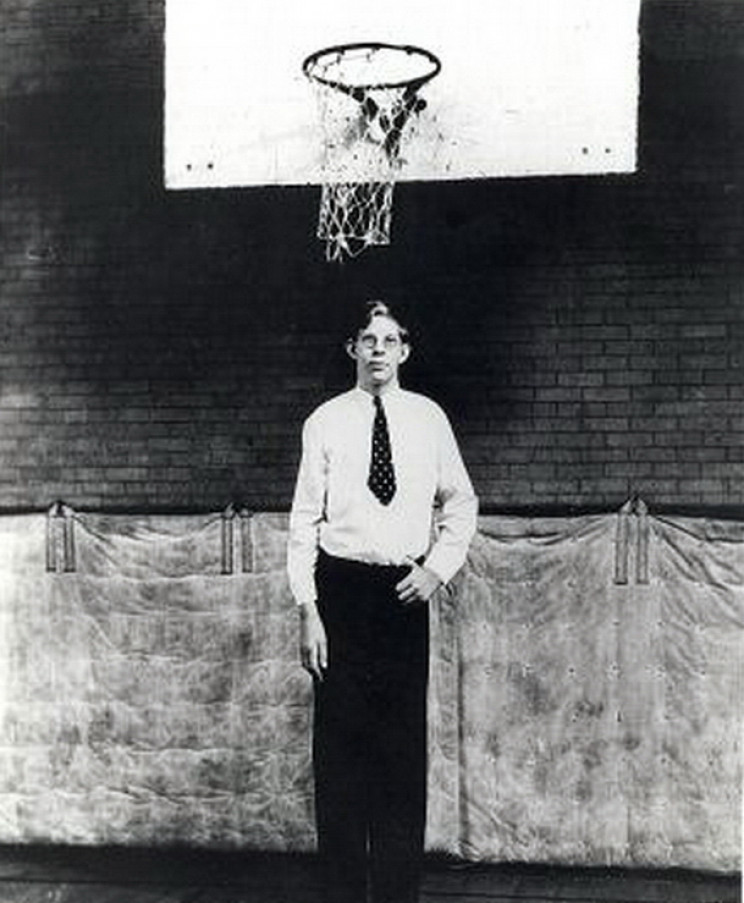 At school, Robert Wadlow had to sit at a custom-built desk to study correctly. You will not be shocked to hear that he was a helpful team member in basketball. He could stand next to the hoop and effortlessly drop the ball in, but his incredible height prevented him from moving quickly.

Wadlow joined the boy scouts at 13 and needed a custom uniform to fit his 7 ft 4 in (2.23 m) frame. He automatically became the world's tallest scout as well.

As Wadlow progressed through school, so did his stature. At the end of middle school, he was 7 ft 5 in, and he soon passed the 8 ft mark during high school. Robert was teased a lot in his school days, but he was good-natured and never took this personally. He managed to laugh at his height occasionally.

After being asked about people staring at him in public during an interview, his response was, "I just overlook them." 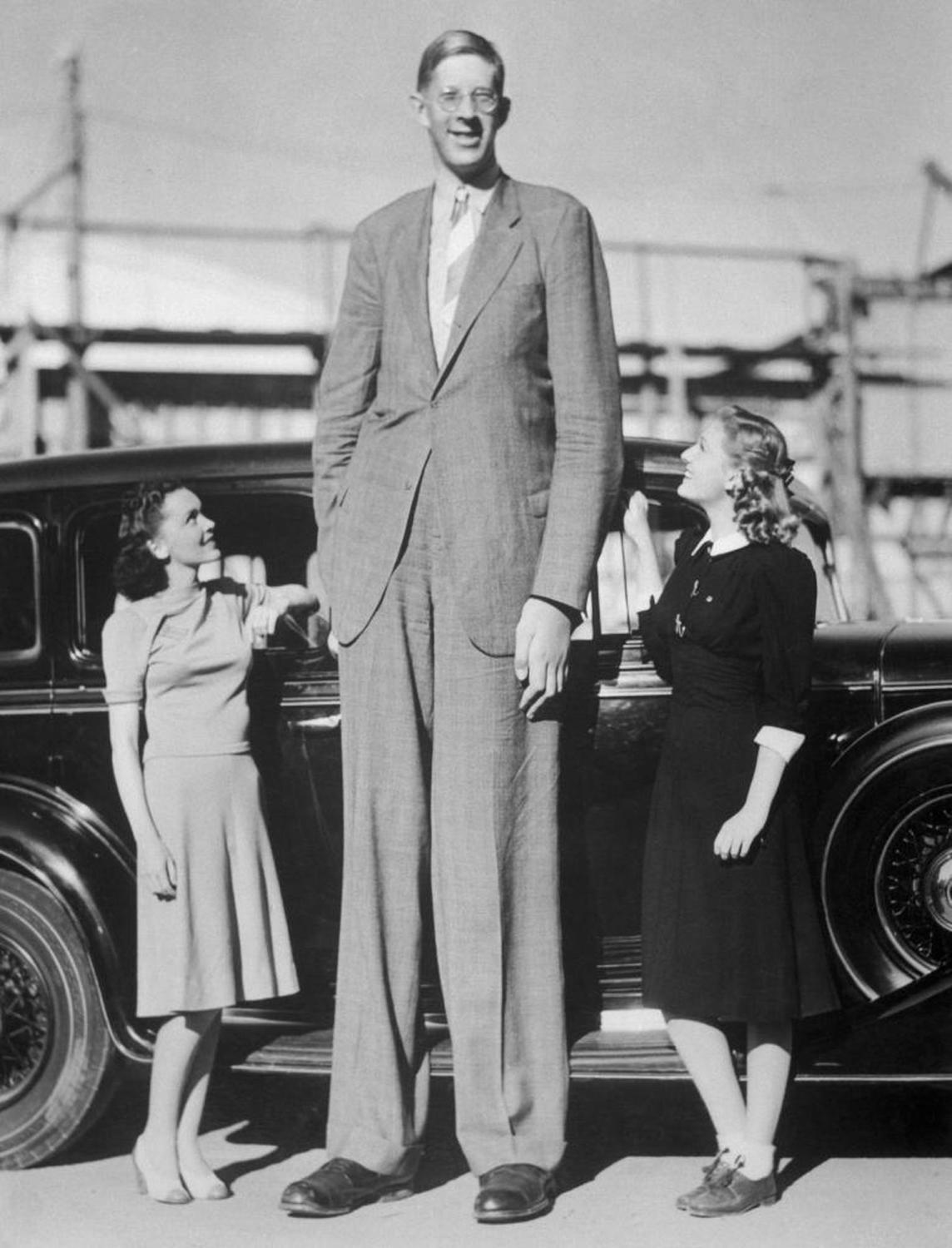 Having graduated from high school, the next natural step for Robert Wadlow was college. After enrolling to study law, his life took a different direction when the Rangling Brothers Circus Group noticed him.

In 1936, Robert appeared in New York and Boston to the delight of the curious crowds. A typical act was for him to stand next to dwarves to exaggerate his astonishing size. These performances made him famous inside and outside America.

Wadlow's travels did not stop there. He earned a sponsorship deal with a shoe manufacturer (called the International Shoe Company) that required him to tour hundreds of towns across the United States. A major perk for Robert was receiving free pairs of shoes. His 18.5-inch feet needed specially made footwear, with each pair costing $100 ― that is over $1000 in today's money! 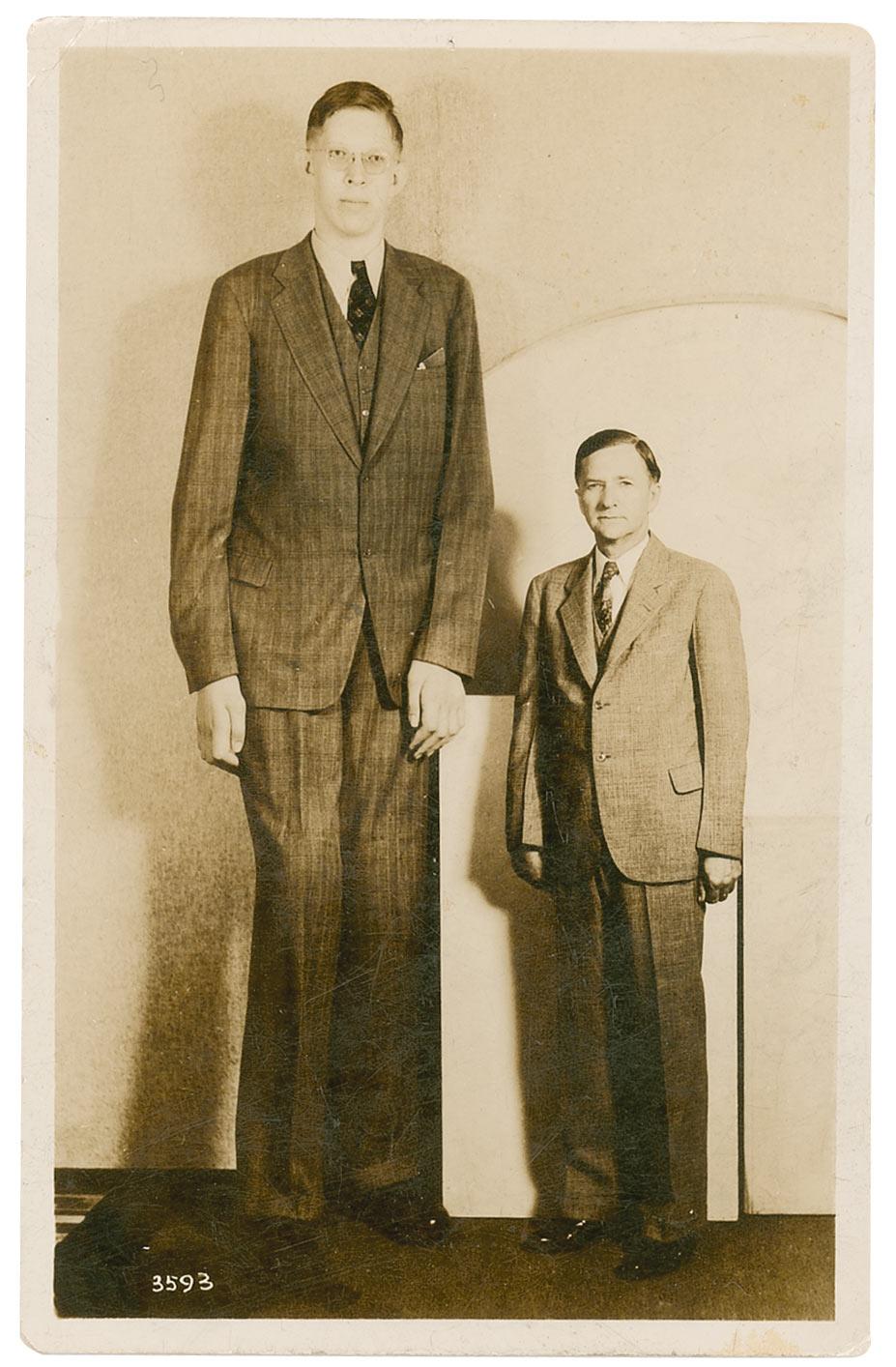 With each extra inch, Robert Wadlow's height made it harder for him to live normally. He left high school standing 8 ft 4 in, but he would not cease to grow.

Not all the attention he received was positive. People would sometimes touch or kick Robert's legs to check that he was not using stilts. Unless they were designed especially for him, Wadlow had to duck under every door frame, squeeze into every chair, and fold his body to ride in a car (if he could fit inside at all).

Walking was a big challenge for Robert at this stage. His legs were under tremendous stress due to his heavy frame. In his later years, he consistently weighed 450 lbs or more. He refused the help of a wheelchair and instead used a cane to move around. As walking became more burdensome, he resorted to wearing braces on his legs. This decision ultimately led to Robert Wadlow's health decline. 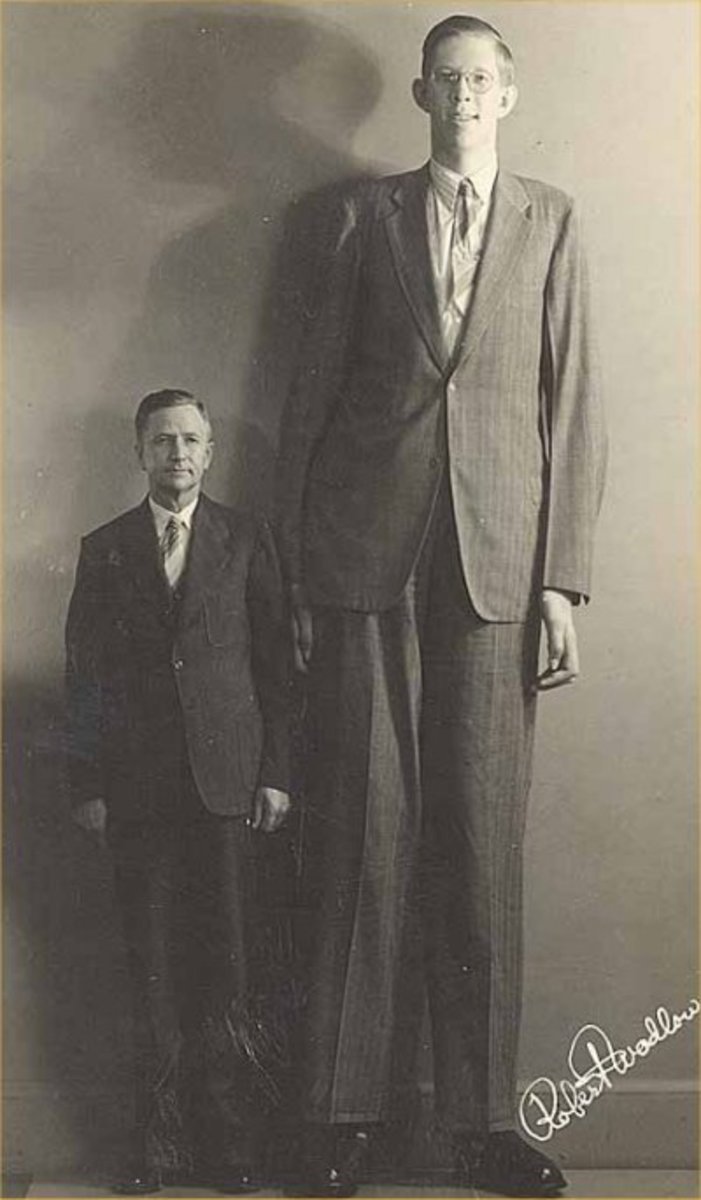 Robert Wadlow started to lose sensation in his legs. It seemed that he was too tall even for his nervous system. This eventually cost Robert his life.

During a 4th of July celebration in 1940, a brace on his leg irritated his ankle until a blister formed. By the time he discovered the blister, it had become infected.

Wadlow's immune system was also fragile, meaning he could not fight off the infection despite the doctors' best efforts. He passed away on July 15th, 1940, aged only 22.

Robert Wadlow had already passed John Rogan as the tallest person in history, and his height two weeks before his death was measured at just over 8 ft 11 in. At the time of his passing, there was nothing to suggest that his growth had stopped. 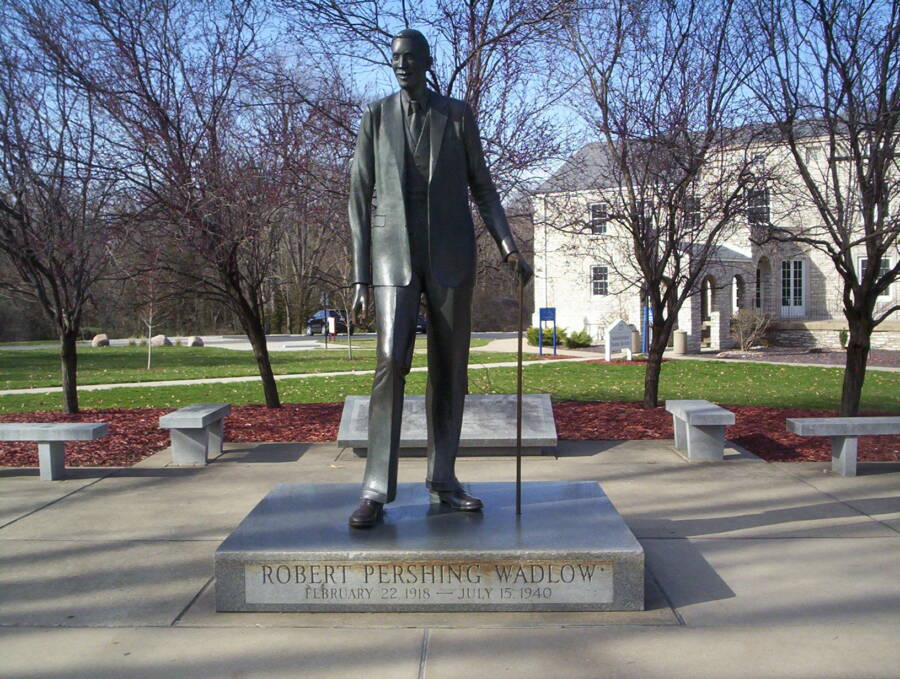 Of all the world records, the tallest man probably remains the most astonishing. People from every country can appreciate Robert Wadlow's immense stature.

His towering figure was immortalized in his hometown when a bronze scale model of Wadlow was installed in 1986. This statue stands next to Alton's Museum of History and Art which dedicates an exhibition to Robert's life.

Robert Wadlow also had the largest hands ever (12,7 inches), so you can understand what a giant he was by measuring your own hands. Aside from his height, Robert is remembered for his excellent character. Thanks to medical advances, nobody is likely to reach his size ever again. Thus, people will look back in amazement at Robert's phenomenal record for years to come.