In this land of magic, theme park rides, and princesses, there lies a secret buried beneath Disneyland, a place that until recently was only ever seen by employees or service workers brought in for maintenance. Underneath the parks are Disney's underground tunnels.

These tunnels allow the characters to travel around the park unseen by the public and maintain the illusion of a truly magical world to remain alive.

Who Was The Man Behind The Disney's Underground Tunnels? 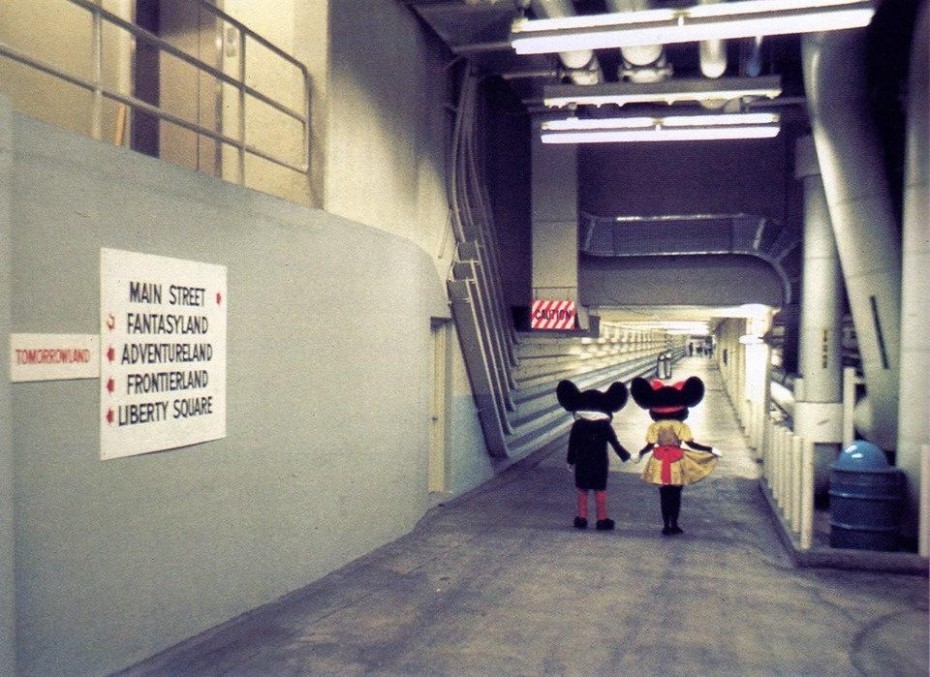 When you write about such a well-known and very well-loved Magical Kingdom, it feels only suitable to start at the beginning. Walter Disney was born on December 5th, 1901, in Chicago, Illinois. From a very young age, much to the surprise of his parents, he showed great creative talents as a writer, voice actor, and entrepreneur. He was one of the first and almost single-handedly paved the way for the American animation industry that he took great pride in.

Disney introduced several different developments in the production of cartoons and held the record for the most Academy Awards ever given to an individual with 22 Oscars from 59 nominations. An incredible achievement remains unmatched to this day. It is no wonder that someone of his talent came up with the inventive idea of building underground tunnels. 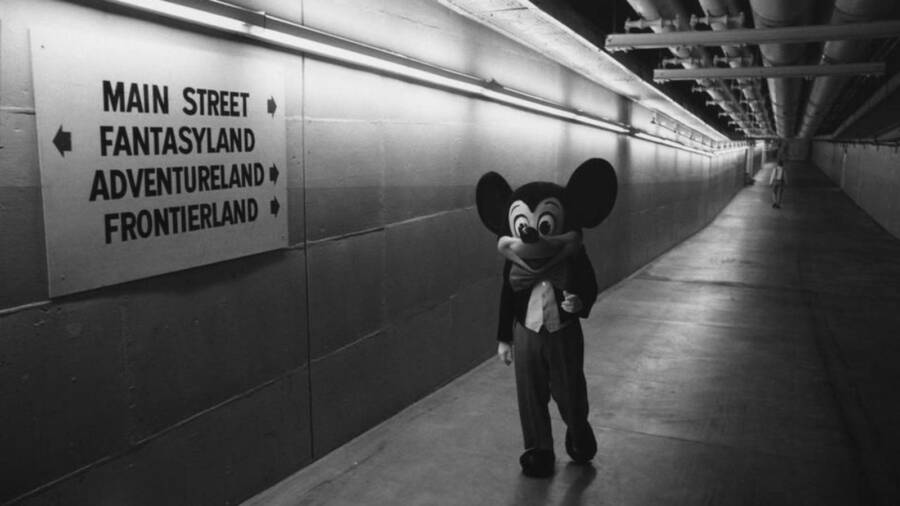 Disney took an early and earnest interest in art and drawing. He took art classes as a boy and took his first job as an illustrator at the young age of 18. From this, he was able to save his money and eventually move to California, where his first and probably his most iconic character was born. A loveable, big-eared dog-loving creature known around the world as Micky Mouse, who was almost an instant success.

In the 1950s, Disney made the decision to expand into the amusement park industry. He knew he would need one of the most beautiful parks of that time, and he achieved this goal when he opened Disneyland in Anaheim, California, in 1955.

Oddly enough, this was where a cowboy strolling through Tomorrowland was so out of place with the futuristic theme that Disney knew he needed to come up with a way to prevent it from happening again to save many children's dreams of a magical kingdom. 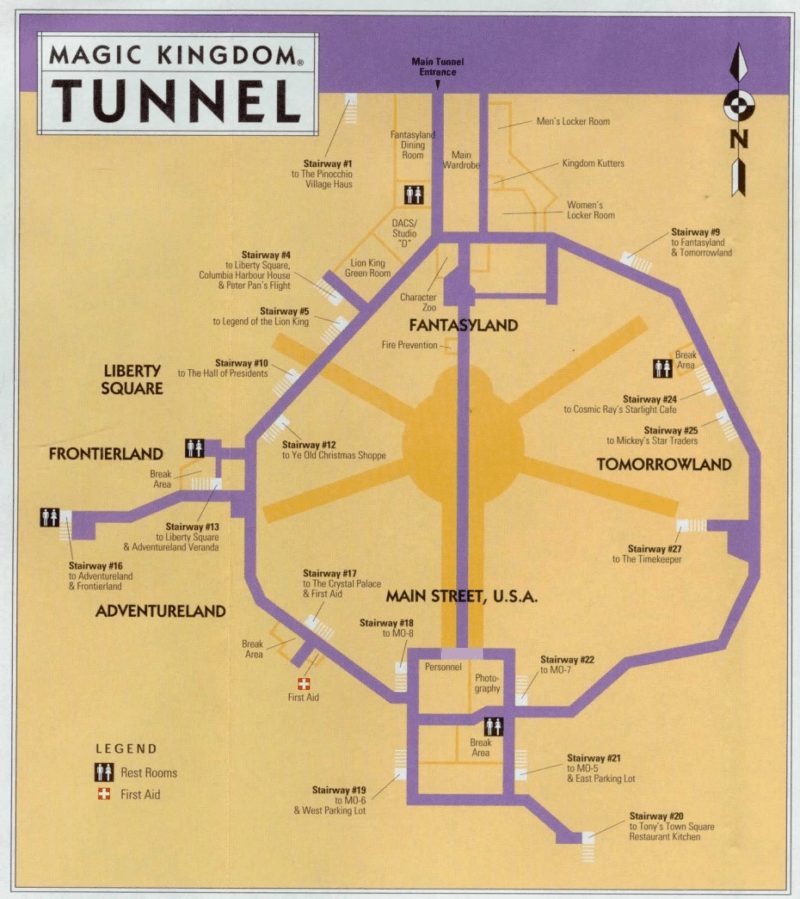 Disney wanted the transition between his creations and everyday life to remain as seamless as possible.

Walt Dinsey put himself in the shoes of a child visiting his park and imagined the horror that child would feel upon seeing Micky Mouse on a lunch break and thus shattering the illusion of bringing his characters to life. The decision to build these underground tunnels was made after witnessing a cowboy walking through Tomorrowland while walking through his park in Anaheim, California. 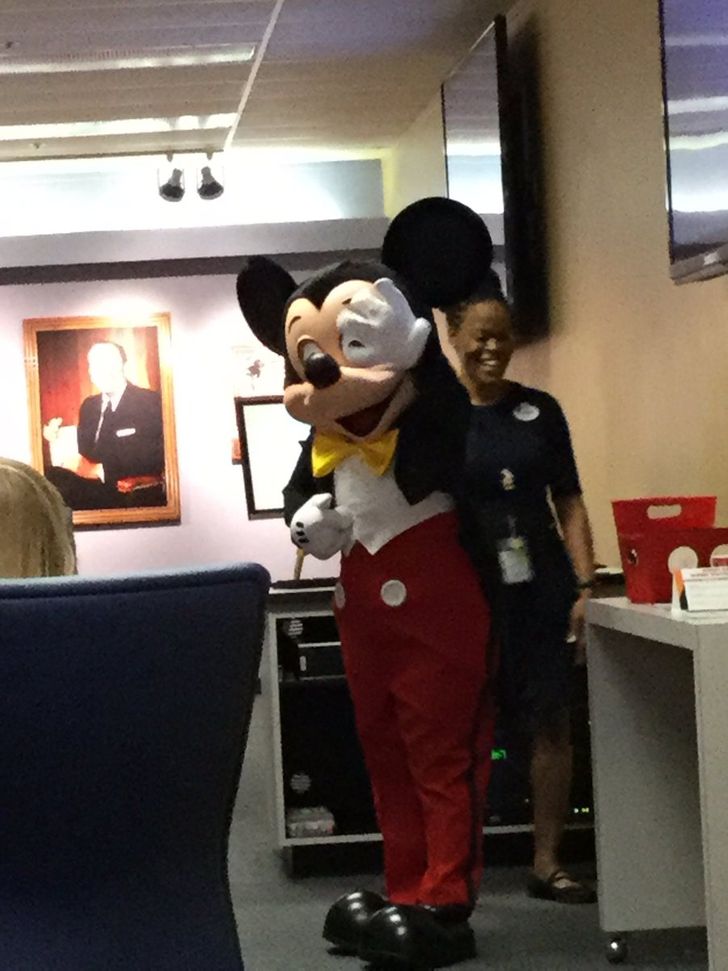 Walt then decided to build the tunnels above ground and simply place his park on top of them, creating the illusion of underground tunnels. Which have been in service since the park opened in 1971, connecting locker rooms, dining halls, and all the kingdoms to allow his creations to travel unnoticed.

The Creator Of Disney's Underground Tunnels 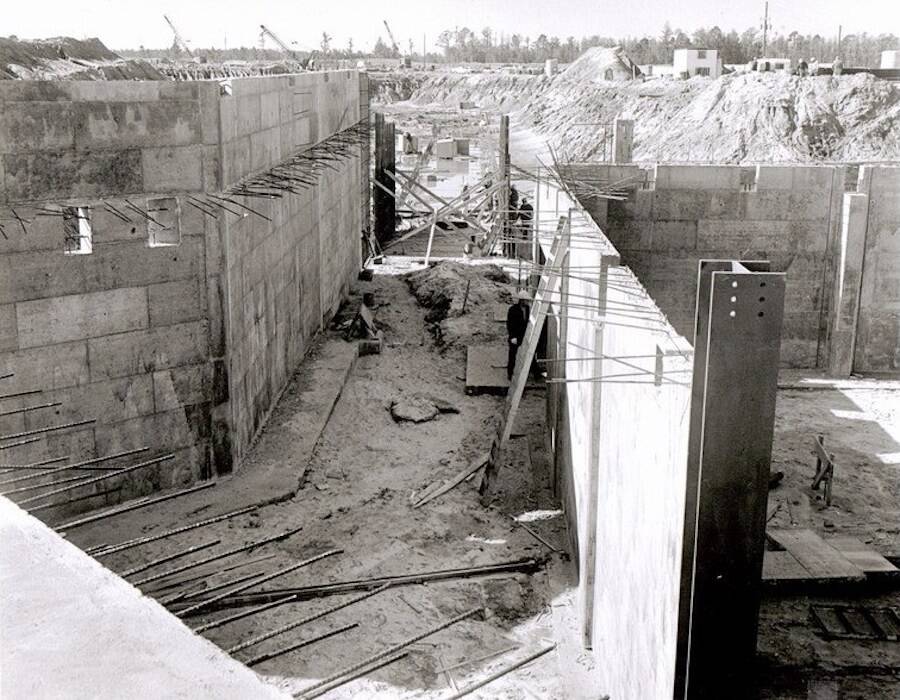 With his vision in mind, Disney just needed someone to help him make Disney's underground tunnels. For this, he turned to William Potter (pictured below), who served in the US military for 38 years as an engineer.

Potter oversaw everything from the bulldozers uprooting trees to the construction of the underground tunnel walls. It is said that he always carried a gun to ward off snakes that seemed to be plentiful in the area at that time, most likely chased from their nests because of the construction project. 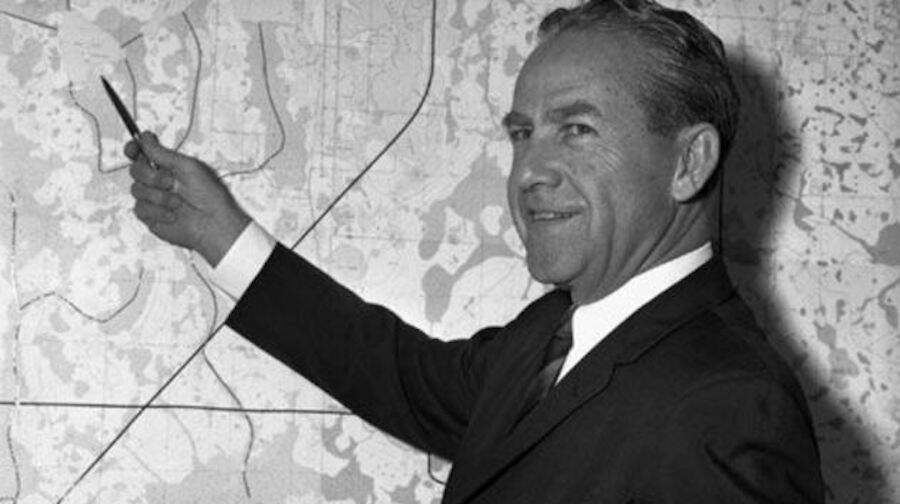 Potter's invention indeed was ingenious, so Potter approached Disney and explained that he intended to create an imperceptible incline when it came time to begin construction. It meant visitors would never notice they had climbed 15 feet into the air before stepping foot into the Magic Kingdom.

In the end, seven million cubic yards of dirt was used to create the incline and cover the underground tunnels after their completion. Amazingly the entire park was built and opened in a mere six years.

Everyone who works for or is employed by the park for maintenance uses these tunnels to travel around the park to keep the illusion of a magical land alive. 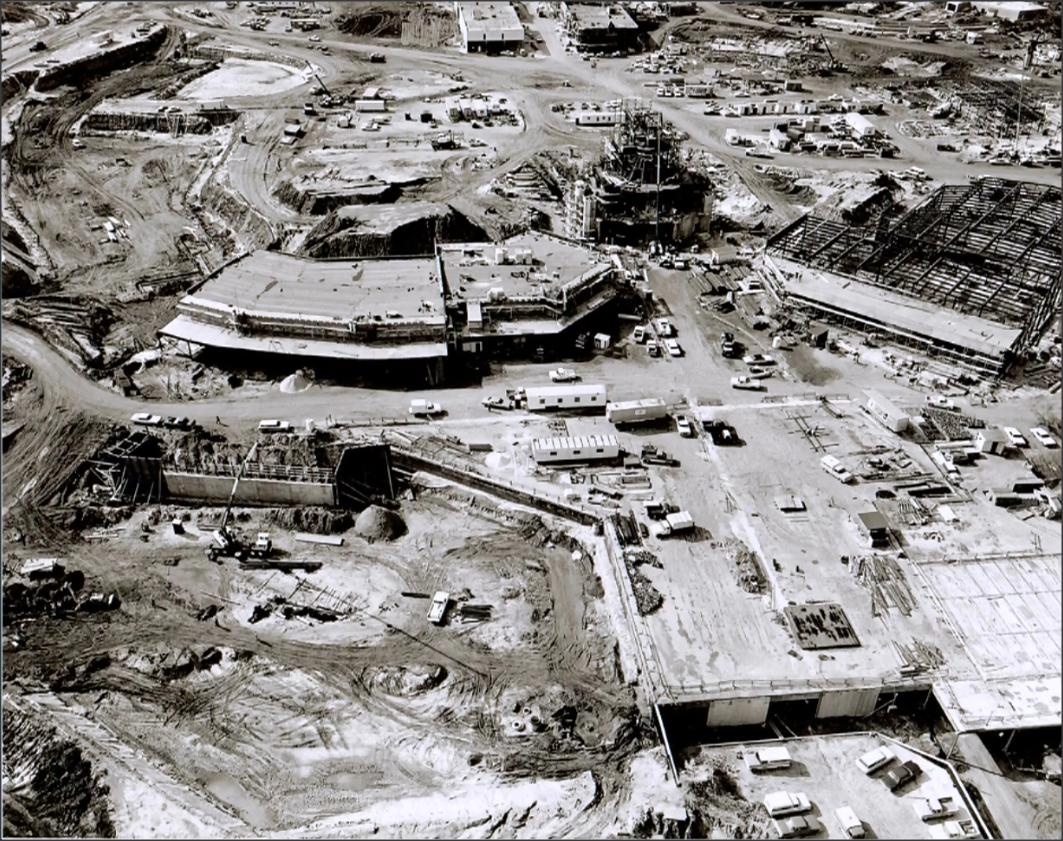 Along with the ceiling of the underground tunnels is an automatic garbage removal system that allowed the park to prevent garbage trucks from disrupting the festivities all around the park.

Shockingly these tubes require very little maintenance, and a blockage is often solved by dropping a rock into the system and hoping that traveling at 60mph will push the object out of the way and free up the tube.

Anyone who has visited this Magical Kingdom is probably asking why they have never seen doors that lead to this underground maze. The answer is simple: the doors are all hidden in plain sight.

Much like your parents would hide your Christmas gifts, and you would never notice, these doors are designed for the same reason.

The doors to Disney's underground tunnels are often built into the sides or base of an attraction or structure, blending in with its surroundings. 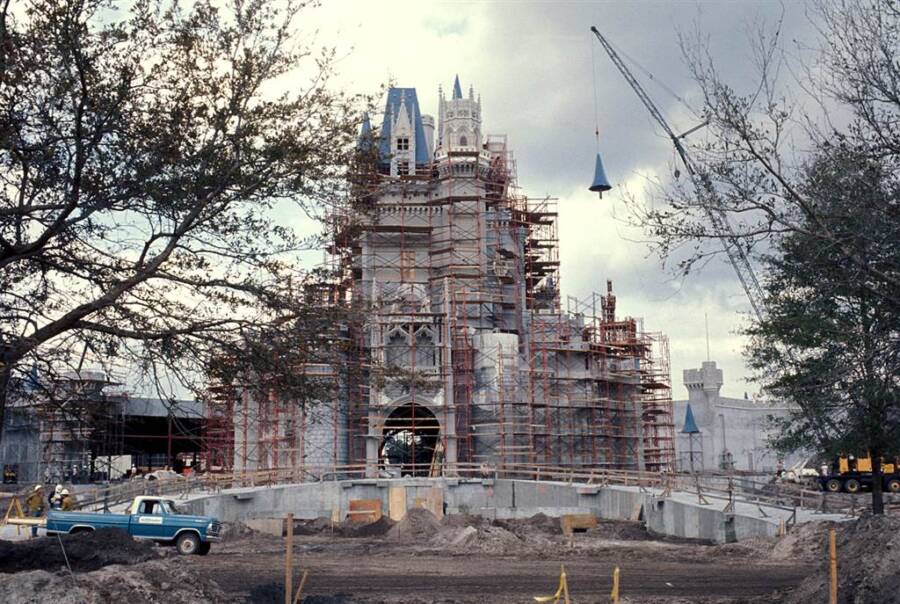 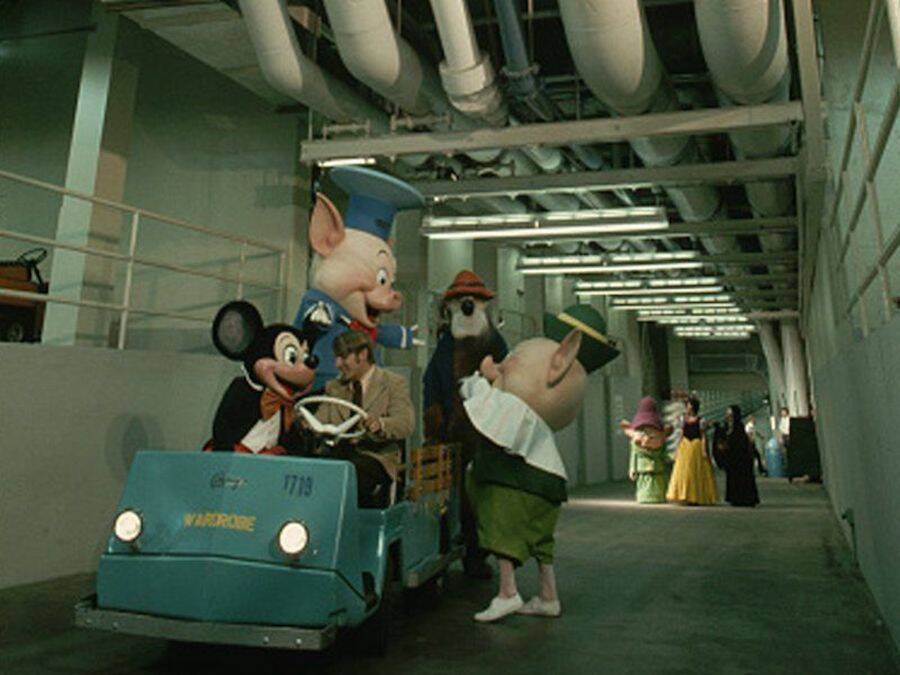 Could you imagine the feeling of walking through Disney's underground tunnels that have been there for so long? To get a chance to experience the history and the true beating heart of the park?

These concrete Disney's underground tunnels are the real reason why everyone can act out their childhood dreams without the reality seeping in or, for some reason, seeing Snow White among an army of Storm Troopers.