The human mind can be as incredible as it can be wicked, and the invention of many sickening torture devices such as the brazen bull proves it. This historical torture device of unimaginable cruelty was intended to be used against witches, villains, transgressors, and other criminals.

The brazen bull also went by the names the bronze bull, the bull of Phalaris, and even the Sicilian bull. This device was not just meant to torture but also to kill prisoners.

The idea was proposed to the tyrant Phalaris by Perilaus (Perillus) of Athens. The twisted invention was supposed to ensure the victim suffered immensely before succumbing to the cruel treatment.

Phalaris ruled over Sicily with an iron fist, and he brought the brazen bull into regular use after it was introduced to him. That is why the startling invention also bore the name the bull of Phalaris or the Sicilian bull.

The torture device was made of bronze. It had a door on one side through which the criminals would be pushed inside.

Perilaus also installed an acoustic device inside the bull to make the screams of the criminal being executed sound like an actual bull. As the person suffered inside the device, their cries would sound like bellows of a tortured animal.

When in use, the criminal was locked inside, and a fire was lit underneath the bull, roasting the poor soul to death as people listened to their desperate cries. 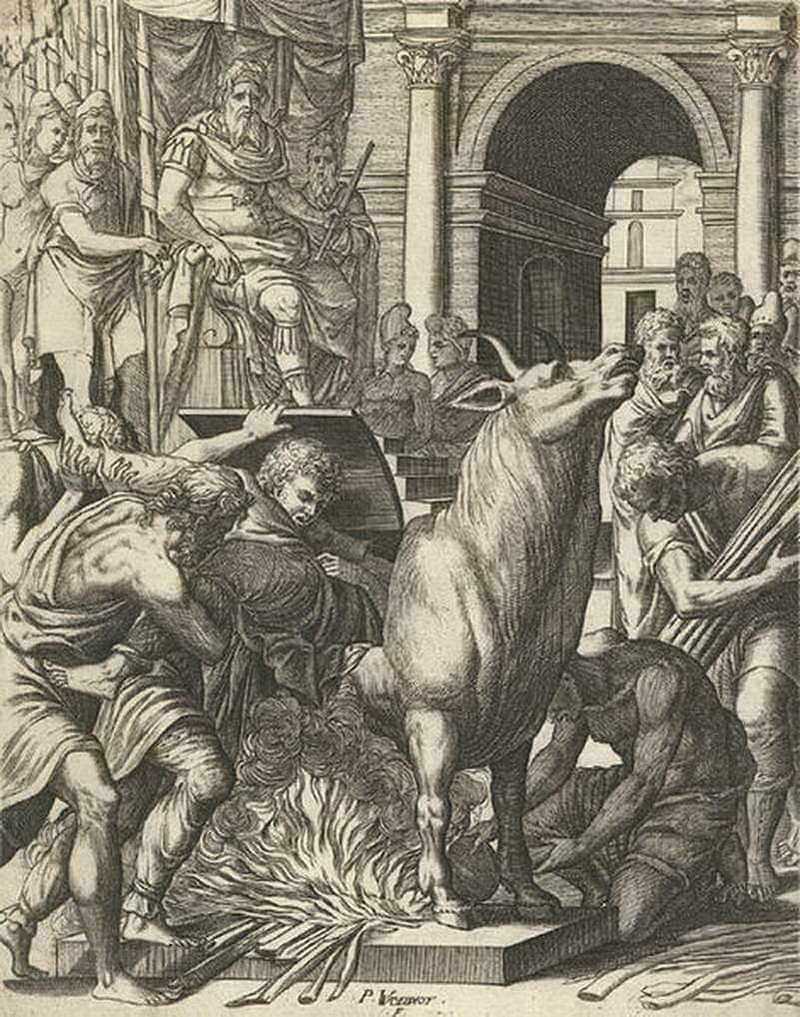 The maker of the brazen bull, Perilaus, typically worked as an inventor. So, the brazen bull was just one of his many inventions, although it turned out to be his last.

He clearly made the right decision by pitching the idea of the brazen bull to Phalaris. The man was famous for his brutality. Apparently, torture was one of his favorite pastimes. That meant that the brazen bull was a welcome part of his collection of twisted torture techniques.

Unfortunately, Phalaris wanted to test the bull as soon as he was introduced. To the tyrant, Perilaus seemed as good a test subject as any. So, the inventor was pushed into the wicked gadget and set on fire just as designed.

However, he was pulled out before he perished after the bellows stopped. Without a doubt, he felt lucky to get away with his life and even entertained the idea that he was about to get a handsome reward for his masterpiece.

However, the brutal Phalaris had other plans for him. The tyrant threw Perilaus off a cliff to his death.

Evidently, the fact that he had made such an evil invention justified the arbitrary execution. It is also believed that Phalaris found Perilaus' description of the torture device very offensive.

Perilaus had apparently told the tyrant that the screams would get through the pipes as "the tenderest, most pathetic, most melodious of bellowings." These words utterly disgusted Phalaris. However, he was pretty fascinated by the invention.

Skeletal Remains From The Brazen Bull Were Turned Into Bracelets

The brazen bull was as large as a typical bull. As the victim got roasted alive on the inside, smoke would escape through the bull's nostrils. The nostrils were filled with incense to keep the smell of burning human flesh from offending onlookers.

Otherwise, the bull would be burned until it turned red hot as the extremely uncomfortable occupant groaned and cried inside until they passed out and died.

After this treatment, the bones were used to make bracelets, and Phalaris proudly wore them. The fact that the bones "shone like jewels" led to the idea that they would make unique bracelets.

Ironically, Phalaris was also stuffed inside the brazen bull after his downfall. He was also burned to death.

Therefore, both the inventor of the brazen bull and Phalaris, the man who first approved its use, encountered the invention in their last moments in this world.

The Romans Found The Brazen Bull To Be Quite Useful 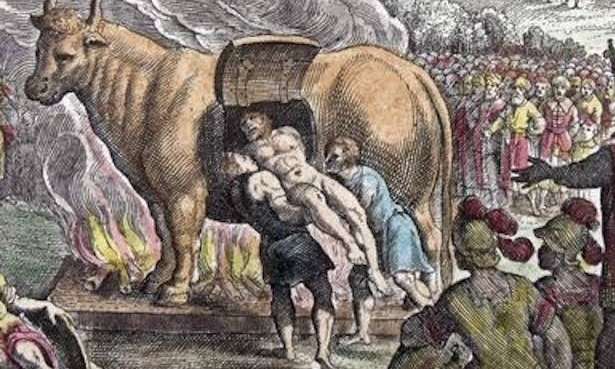 Phalaris reigned from 570 to 554 BC and went down in history as the most famous tyrant in the city of Agrigentum. Although the tyrant was no more, his famous invention would continue to be used to torture people.

For instance, the brazen bull proved to be quite popular in the Roman empire. A number of people who died in this manner are mentioned in Christian legends.

After adopting the bull from the Greeks, the Romans used it to persecute Christians, including Saint Antipas and Saint Eustace. Saint Eustace was roasted inside a brazen bull along with his wife and children by Emperor Hadrian.

The executions were done in public to ensure the brazen bull served as a deterrent to potential criminals. The screams the torture victims made and the suffering the criminals went through while exposed to the extreme heat helped many people realize that avoiding a life of crime was the best way to live.

Death inside the brazen bull was slow and unbearable. 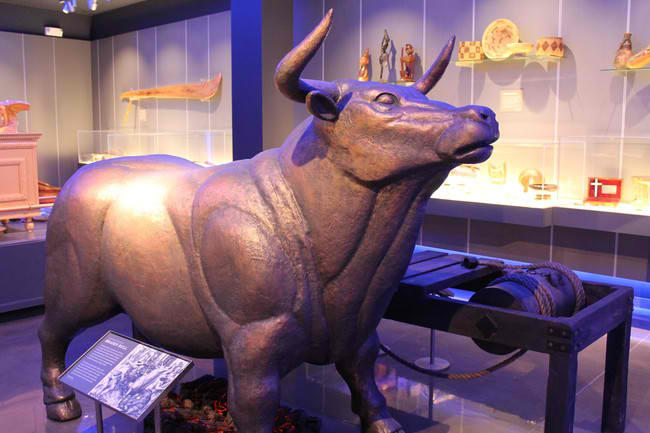 The brazen bull shocks people to this day, which is why it appears in popular culture and literature. In 1000 Ways to Die, an episode is dedicated to the bull of Phalaris, although the account has some inaccuracies due to claims that the bull was entirely soundproofed.

The bull is also referenced in the game Assassin's Creed: Origins, which discussed a torture tool used in ancient Egypt. The brazen bull also appeared in Amnesia: The Dark Descent, another video game. The torture device is also used in the Criminal Case video game to kill one of the victims.

Furthermore, the brazen bull is also referenced in books such as Breakfast of Champions and The Name of the Rose. In the book, Library at Mount Char, a brazen bull is used by "Father" to teach David a lesson. In a manga series, Though You May Burn to Ash, a character is tortured and killed using a brazen bull.

In Saw 3D, the protagonist's wife, who lied about being tortured by the "Jigsaw," dies in a brazen bull after he fails a "test" to save her from the fiery fate. Additionally, in the movie Red Riding Hood, a brazen elephant is used as a torture device, relying on the same concept as a brazen bull.