For decades, the accepted belief among Egyptologists and archaeologists was that the Great Sphinx of Giza was around 4,500 years old, dating back to around 2500 BC. However, this is simply a theory and not a confirmed fact. As Robert Bauval states in his book, The Age of the Sphinx, "there was no inscriptions ― not a single one ― either carved on a wall or a stela or written on the throngs of papyri that associates the Sphinx with this time period."

So, when was the Great Sphinx of Giza constructed?

How Old Is The Sphinx?

John Anthony West, an author, and alternative Egyptologist questioned the conventional age of the Great Sphinx of Giza due to the vertical weathering observed on its base, which he argued could only have been caused by prolonged exposure to water in the form of heavy rain. He posited that if rain caused the weathering, where did this water come from in the desert?

It turns out that this region of the world experienced heavy rains around 8,000-10,500 years ago. If this is true, it would make the Sphinx more than twice as old as its currently accepted age. Author Robert Bauval, known for his Orion Correlation Theory about the Giza Pyramid Complex, and his colleague Graham Hancock, have also suggested that the Great Sphinx dates back to around 10,500 BC.

However, recent studies have suggested that the Sphinx may have been constructed as early as 7000 BC, based on a theory called "precipitation-induced weathering". This theory holds that the last time there was enough precipitation in the area to cause the pattern of rain erosion on limestone seen on the Sphinx was around 9,000 years ago, which would place the construction date at around 7000 BC. This idea is gaining support among archaeologists. 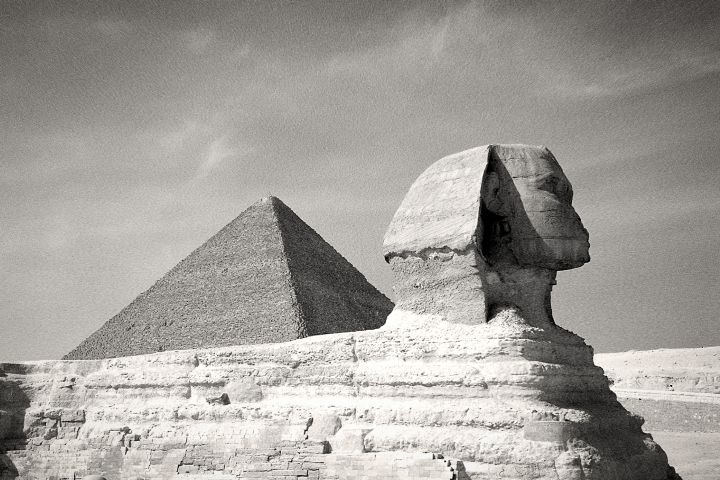 A study entitled "Geological Aspect of the Problem of Dating the Great Egyptian Sphinx Construction" suggests that the Sphinx may be as old as 800,000 years.

An examination of the formation of wave-cut hollows on coastal seas and the erosion patterns in the form of hollows found on the surface of the Great Egyptian Sphinx indicates that they have a similar formation mechanism linked to prolonged water activity in large bodies of water, during which the Sphinx was submerged. Geological data from literary sources suggest that the Sphinx may have been submerged in the Early Pleistocene and its initial construction may date back to the earliest known history.

More specifically, the wave-cut hollows on the Sphinx suggest that during the Calabrian Age, which lasted from 1.8 million years to 781,000 years ago, the Mediterranean Sea began to encroach into the Nile Valley and its water level rose, resulting in the formation of long-lasting bodies of water in the area. This theory implies that the Great Egyptian Sphinx was created and existed at least 781,000 years ago.

If geologists are able to study all the disputed aspects of the Great Egyptian Sphinx's construction and prove that it is older than previously thought, it would lead to a new understanding of history and reveal the true driving forces behind the intellectual development of civilization.

What Do The Traditional Egyptologists Say About These Theories?

Many traditional Egyptologists reject the idea of the Sphinx being older than 7000 BC, as it would fundamentally change our understanding of ancient civilization, and there is currently no evidence of an Egyptian civilization that dates back that far.

Additionally, these new theories center around a single type of erosion and do not take into account other evidence that supports an age of 4,500 years. For example, the Sphinx is a rapidly weathering structure, appearing older than it is, subsurface water drainage or Nile flooding could have caused the erosion pattern, and the Sphinx is believed to resemble Khafre, the pharaoh who built one of the nearby pyramids of Giza and lived around 2603-2578 BC.

The idea of an unknown civilization that predates the ancient Egyptians is intriguing, but most archaeologists and geologists still support the conventional view that the Sphinx is around 4,500 years old.

If the theory of "precipitation-induced weathering" is correct and the calculations of Bauval and Graham Hancock are true, it raises the question of who built the Great Sphinx and the Great Pyramid of Giza nearly 10,500 years ago, and for what purpose. It also raises the possibility of a previously unknown civilization from a different part of the world being responsible for the pyramids. 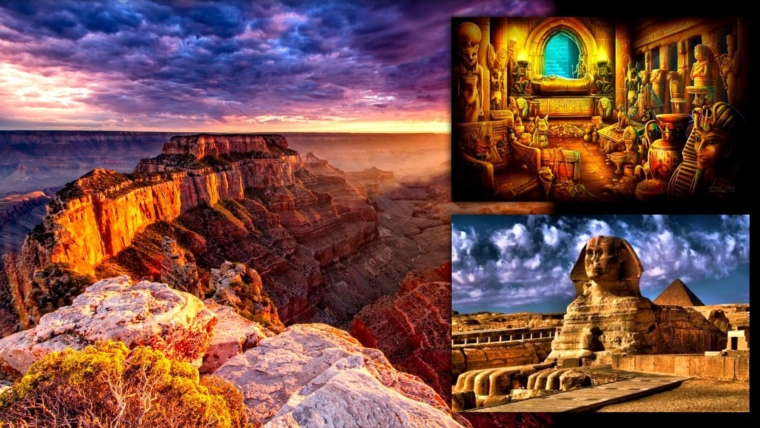 A 1909 edition of the Arizona Gazette featured an article entitled "Explorations in Grand Canyon: Remarkable finds indicate ancient people migrated from Orient." The article states that the expedition was funded by the Smithsonian Institute and that the artifacts found if authentic, would challenge traditional history.

The article claims that inside a cavern "hewn in solid rock by human hands," artifacts were discovered including tablets with hieroglyphics, copper weapons, statues of Egyptian deities, and mummies. Could there have been an entire civilization of Egyptians living in the area? If so, how did they get there?

Despite being highly fascinating, the authenticity of this story is uncertain as the site has never been rediscovered. The Smithsonian denies any knowledge of the discovery and several expeditions searching for the cavern have been unsuccessful. It's possible that the article is a hoax.

"While it cannot be discounted that the entire story is an elaborate newspaper hoax," writes researcher and explorer David Hatcher Childress, "the fact that it was on the front page, named the prestigious Smithsonian Institution, and gave a highly detailed story that went on for several pages, lends a great deal to its credibility. It is hard to believe such a story could have come out of thin air."

The Grand Canyon is a breathtaking and awe-inspiring natural wonder in the United States, stretching 277 miles along the Colorado River. The Hopi Indians consider it the gateway to the afterlife, and its vastness and mystery attract millions of visitors annually from around the world.

What many visitors may not realize is that the Grand Canyon may have once been the home of an entire underground civilization, but questions remain about their whereabouts and why they abandoned the canyon. This remains a historical mystery to this day.

It is possible that the claim of "Egyptian Treasure in the Grand Canyon" is not true and there is currently no evidence to support it. However, it is also worth questioning how certain we are that there was no civilization before 10,500 years ago in Egypt, or that the only reason behind the construction of the Great Egyptian Sphinx and Pyramids was as tombs for Pharaohs and their families.