Should students get rewarded for putting in zero work? If not, should we punish the teachers who're not willing to reward such behavior?

Over time, the education curriculum seems to have been watered down. There is a degree of indifference not only in the actual behavior of students towards learning but in what the curriculum allows. This is evident in the case of a 52-year old former teacher in Port St. Lucie, Florida.

After teaching for 17 years, Diane Tirado got fired because she refused to give her students a free pass, 50% credit, for work they didn't do. Diane taught Social Studies to eighth-graders at West Gate K-8 School. She assigned her students an explorer notebook project and gave them two weeks to complete it.

However, at the end of the given period, some of her students failed to turn in their assignments. She, thus, gave the zero mark to each of them. According to her:

"If there's nothing to grade, how can I give somebody a 50%"

What Diane Wasn't Aware Of 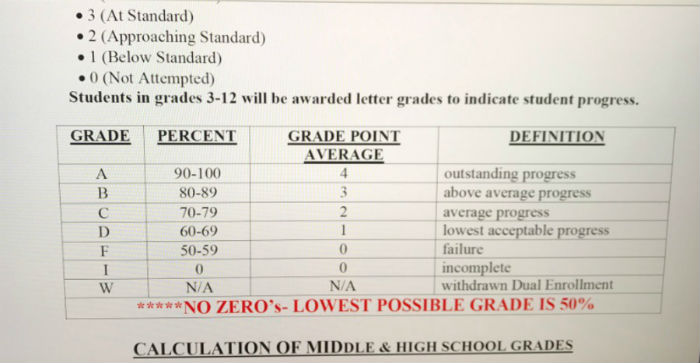 A strange policy was brought to her notice. West Gate School has a student and parent handbook that states a No Zero policy below the grading outline highlighted in red: "NO ZEROs - LOWEST POSSIBLE GRADE IS 50%."

The school administrators reemphasized that she has to give the students who did not turn in anything 50%. Tirado bluntly refused, saying:

For her refusal, her employment contract was terminated. She, however, left her students a goodbye note on the whiteboard.

Mrs. Tirado loves you and wishes you the best in life! I have been fired for refusing to give you a 50% for not handing anything in.

Tirado's Stance Remains Even After She Is Fired

Even after leaving, she has called for the school to adjust the "no zero" policy. She believes that spoon feeding the students with scores they do not merit will be damaging in the long run.

In an interview with CBS 12, she stated:

"I'm arguing the fact that you don't get something for nothing. I want the policy change, and it's not just here".

Also to WPTV, she said:

"I'm so upset because we have a nation of kids that are expecting to get paid and live their lives just for showing, and it's not real."

She obviously is a teacher who lives her life on her terms with her own principles and cares deeply about her students.

Surprisingly, the chief information officer for the school district, Kerry Padrick, said that there is no policy stopping teachers from awarding zeroes to students. This is a clear objection to the reason Tirado was fired.

"The District's uniform Grading System utilizes letter grades A-F, numerical grades 100-0, and grade point average from 4-0. Some classroom teachers and school facilities have discussed the range of points for work submitted in each category."

West Gate sure has some explaining to do. What's even more confusing is that the school's handbook states that a letter grade "I" for Incomplete. It's equivalent to a zero.

We still await changes to this policy. Will they ever be made? Only time will tell. However, we do know that in Mrs. Tirado's class, grades are earned.