In the past few weeks, inflation has been rising significantly in Europe and the U.S. Now, Russia and other BRICS nations have revealed that they are creating a new "international reserve currency."

BRICS consists of five major emerging economies, and they would like to rival the U.S. dollar and IMF's Special Drawing Rights (SDRs) currency.

The plan was revealed by Vladimir Putin, the Russian president, during the 14th BRICS Summit this year. Turkey, Saudi Arabia, and Egypt are also considering being BRICS members.

Members of BRICS met at the end of June to talk about world affairs.

Energy prices have reached record highs in the West in the past month, and the crisis has been blamed on COVID-19 and the Ukraine-Russia war. According to data from America and Europe, fuel prices are at all-time highs. Experts predict that countries in the West that aren't already in a recession are headed there.

"The matter of creating the international reserve currency based on the basket of currencies of our countries is under review. We are ready to work with all fair partners openly."

Experts believe that the decision by BRICS to create a reserve currency is intended to undermine the U.S. dollar and IMF's SDRs (Special Drawing Rights).

Chris Turner, the head of markets at ING, pointed out that the decision was intended to deal with the perceived U.S. hegemony of the IMF. According to Turner, BRICS nations intend to "build their own sphere of influence and unit of currency within that space."

The news about a new reserve currency might be surprising, but reports that some BRICS member countries have opposed the U.S. dollar are nothing new. A report from May 2022 indicated that member countries had been encouraged to end their dependence on the dollar.

Business Relations Among BRICS Countries On The Rise 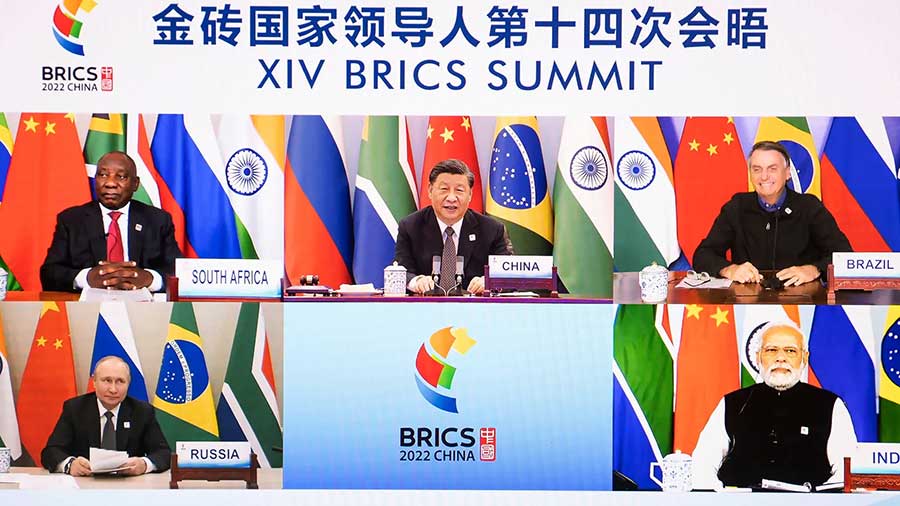 Putin later said after the summit that there was increased contact between Russian businesses and businesses in the BRICS countries. He also noted that his country would host Indian retail chain stores and that Chinese cars and hardware would be imported into the country.

Due to these statements, some people have started realizing that BRICS members are not "just a "talk shop" anymore."

Like South Africa, Russia has also increased foreign aid and delivered weapons to Sub-Saharan Africa. BRICS members have also made U.S. hegemony and exceptionalism through targeted statements through the media.

During this year's St. Petersburg Internationa Economic Forum, Putin spent 70 minutes talking to the crowd about the United States and its years-long dominance of the global financial system. He announced:

"Nothing lasts forever. [Americans] think of themselves as exceptional. And if they think they're exceptional, that means everyone else is second class."

While speaking with Russian ambassadors, he said that the economic power of the West was going down. He claimed:

"Domestic socio-economic problems that have worsened in industrialized countries due to the (economic) crisis are weakening the dominant role of the so-called historical West."

He further warned the ambassadors to be ready for "any development of the situation, even for the most unfavorable development."

As far as Putin and Russia are concerned, U.S. influence concerning financial dominance is dwindling. Putin also pointed out that the country was sanctioning certain countries, such as Russia, which would further undermine confidence in the U.S. dollar.

Putin noted that most fallen empires throughout history made the mistake the U.S. is making. He claimed that an empire always thinks it can allow itself to make mistakes and take extra costs because of its power, but that "the quantity of those costs, those mistakes inevitably grows."

Therefore, he feels that a time will come when the U.S. can no longer handle these costs and mistakes within the security and the economic sphere.

Bloomberg reported in June that during the BRICS Summit, Chinese president Xi Jinping had suggested that NATO had antagonized Russia. He pointed out that countries that promote exceptionalism will end up suffering from security vulnerabilities:

"Politicizing, instrumentalizing, and weaponizing the world economy using a dominant position in the global financial system to impose sanctions wantonly would only hurt others as well as hurting oneself, leaving people worldwide suffering. Those who obsess with a position of strength, expand their military alliance, and seek their security at the expense of others will only fall into a security conundrum."

The FInancial World Will Be Split Into Two With the introduction of a new world reserve currency, there will be many issues in the future. As it is, BRICS nations have been stronger since the start of the Ukrainian conflict.

In 2014, Russia developed a System for Transfer of Financial Messages (SPFS). Eventually, the Mir payment system was established.

After Crimea was annexed in the same year, Russia started stockpiling gold.

Last year in April, China allowed billions of dollars worth of gold imports. Since the First World War, the U.S. dollar has been the global reserve currency, with the country becoming the biggest international creditor. Today, the dollar is booming compared to other currencies and is stronger than ever.

This year alone, the dollar gained more than 10%, surpassing other strong currencies such as the Japanese yen.

Euro also met parity with the dollar, even as other currencies such as the Indian rupee, Colombian peso, South African rand, and the Polish zloty declined compared to the U.S. dollar.

Still, the Russian ruble has given the dollar intense competition this year, becoming one of the best performers in 2022.

The Federal Reserve increased interest rates, and inflation rose, described by Kamakshya Trivedi, the co-head of Goldman Sachs, as a "pretty touch mix" to handle. Goldman Sachs believes that the dollar will remain strong for the foreseeable future.

According to Trivedi, however, "the largest part of the dollar move may well be behind us."