Childbirth is as old as human history, and it has always been messy and full of anxiety, even without having to worry about a doctor using a chainsaw for childbirth. But, can you imagine an obstetrician stepping into the delivery room while wielding a chainsaw?

Okay, that is not exactly how this device was used back in the day, but the reality of what happened is not any less horrifying.

Today, the chainsaw is mainly associated with wood loggers or gory horror movies where it's used to severe limbs and chop people into pieces. However, its initial application was in a medical procedure known as symphysiotomy, which was necessary during a difficult childbirth.

During a symphysiotomy, the chainsaw would help remove the child quickly from the womb.

Today, the medical procedure is outdated, but those who underwent it claimed that it was nothing but a butchering, and you will soon find out why.

Also, the chainsaw they used at the time was much smaller, and of course, it was not powered by an engine or a motor like modern chainsaws. However, there is still no mistaking that the two inventions are very closely related.

The chainsaw was actually used as a medical aid for nearly three centuries. At the time, hospital hygiene was unimaginably bad, and anesthesia was still a long way off.

Why Chainsaws Were Favored Over C-Sections 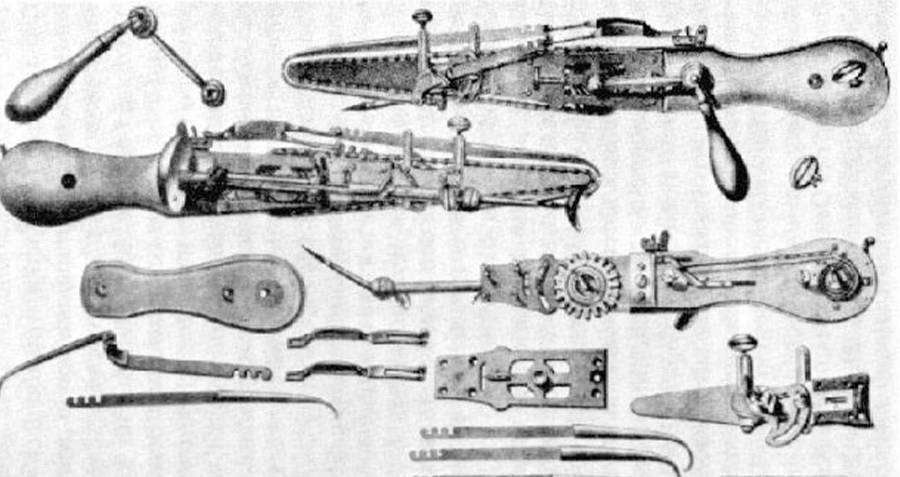 Childbirth is still quite messy today, but still, we have come a long way. When doctors used a chainsaw for childbirth, birth complications were often deadly, which is why C-sections were not an option.

Many centuries ago, Caesarean sections could result in infections, and doctors had to develop other options. That is how symphysiotomy was invented.

Generally, the saw was used in situations where a baby was being delivered in a breech position. The saw also came in handy when the baby was "stuck" or "too big."

The medical technique known as symphysiotomy became popular in 1597. Today, medical professionals think it was a horrible practice.

Using a chainsaw for childbirth was the stuff of horrors. 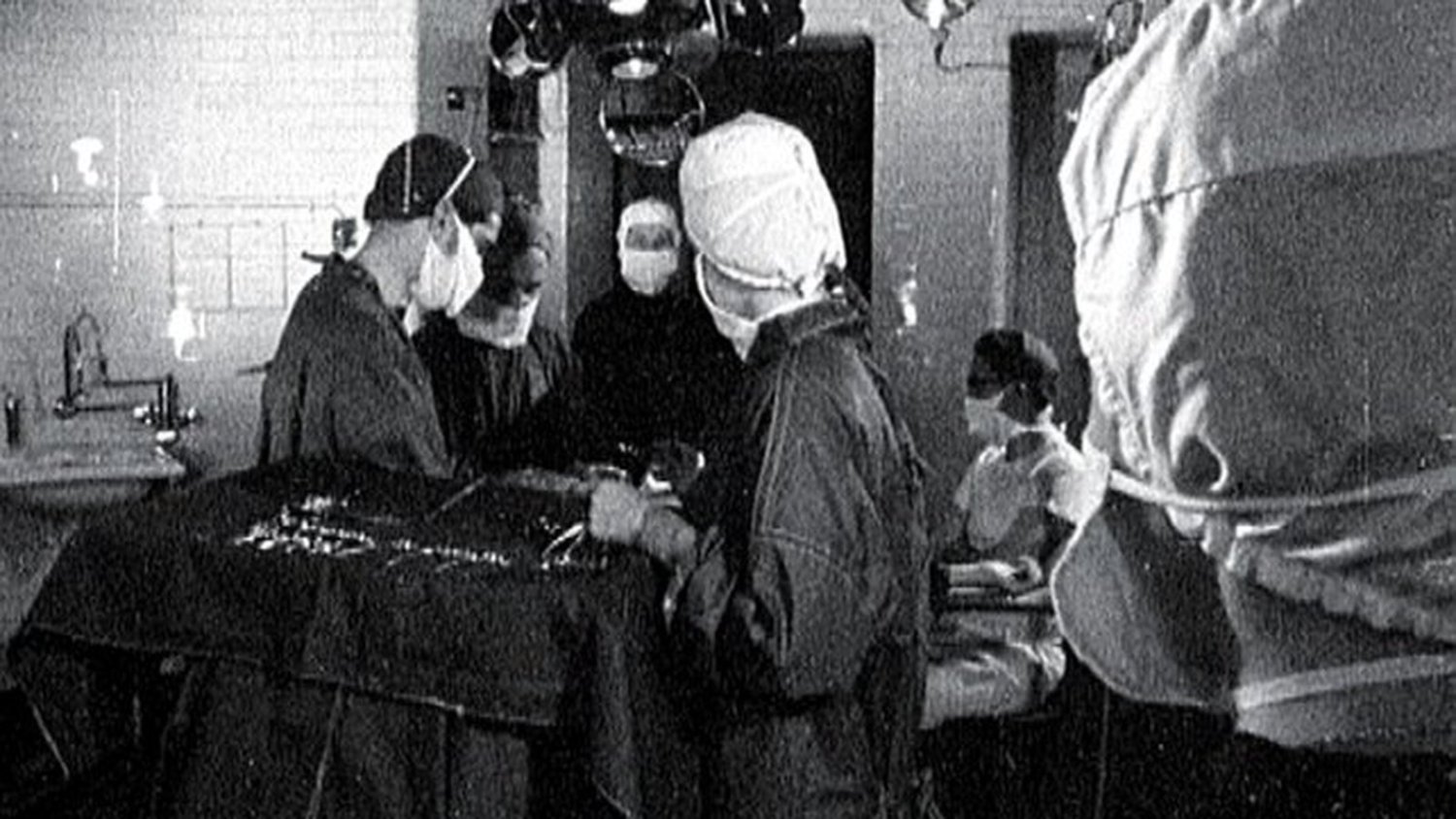 Before chainsaws came along, a knife would widen the birth canal by separating the muscle that connects the pubic symphysis. In literal terms, that meant cutting the pelvis in half.

Soon enough, doctors realized that the method was excruciating, time-consuming, and fraught with inaccuracies.

Two Scottish doctors, John Aitken and James Jeffrey, came up with the chainsaw to resolve this issue.

The purpose of the saw was to cut through the symphysis faster and with a greater degree of accuracy. First of all, the chain had to be wrapped around the pelvic bone, and it would be operated by pulling on the handle.

The chain had serrated teeth that would cut through the flesh.

The invention was improved later on by Bernhard Heine, an orthopaedist. He invented something known as an osteotome.

This saw was operated using a hand crank, and the chain went around a blade. So, doctors could finally hold the saw like a knife.

When the chainsaw was first used, there was no anesthesia, and bones had to be broken.

Eventually, anesthesia came along, and the saw was increasingly used in symphysiotomies. Over time, the chainsaw was being used in other medical procedures such as amputations.

The Death Of Symphysiotomy, and The New Uses Of The Chainsaw 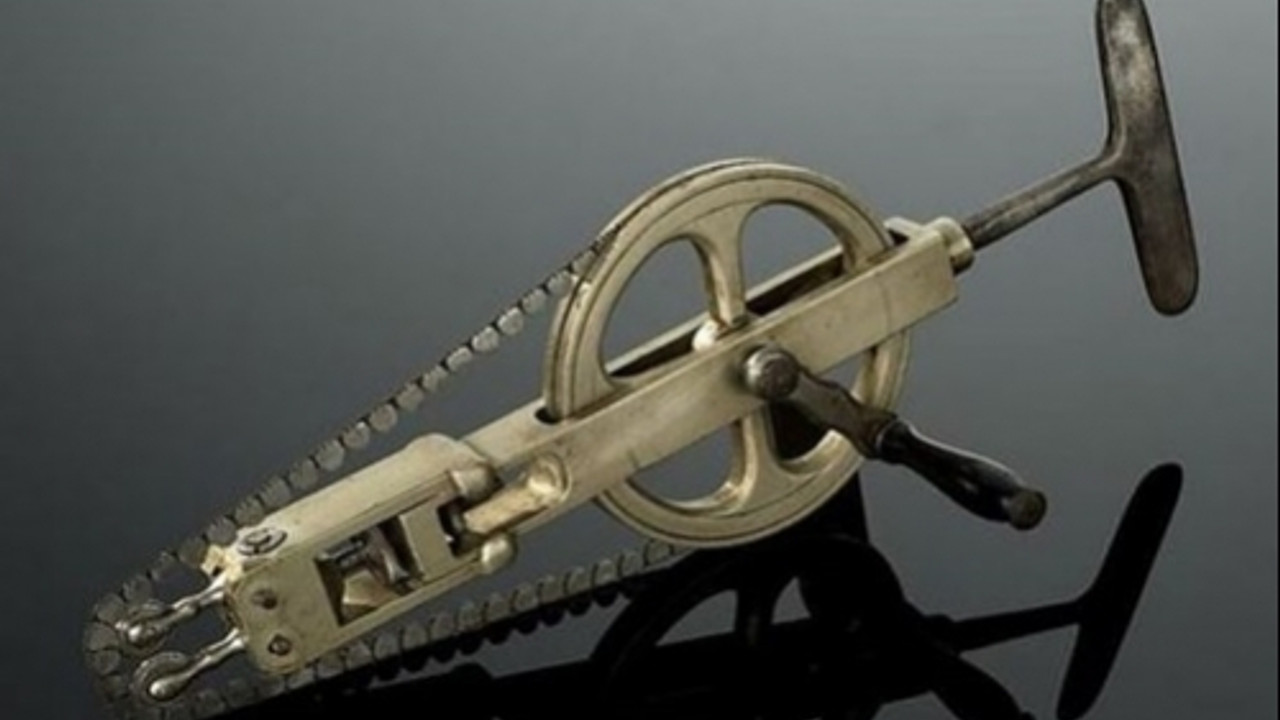 Eventually, symphysiotomy lost appeal. That was because hospital hygiene improved, making C-sections a lot safer and less prone to complications than the crude saws.

In any case, taking a chainsaw to the pelvis often resulted in the poor woman being unable to walk after having the child, and sometimes, serious consequences would plague the mother all her life.

The use of a knife or a chainsaw for childbirth was also linked to bladder injuries and a high risk of infections.

However, saws were still used to remove diseased bones, cut away infected flesh, and perform amputations even after losing their role as delivery aids.

Even though doctors were not using the saws as much, someone else had found another use for the chainsaw. This was a logger based in San Francisco.

The man realized the chainsaw could be used to fell redwood trees. He even went ahead to get a patent for an "endless-chain saw" based on the osteotome in 1905.

Other inventors and loggers took the idea further to create the chainsaw we know today. The modern chainsaw is mainly used to cut tree limbs, not human limbs.

Birth Technology Has A Brutal History

You might think that using a hand-cranked chainsaw to cut a woman's pelvis in half while she was still conscious during childbirth is as bad as it can get as far as birth technology goes, but you would be mistaken.

For instance, in 1963, a device was invented to help mothers deliver through centrifugal force. This technology would rotate the mother until the baby shot out of the womb.

The device came with a net to catch the baby. Believe it or not, the patent for this device was granted.

Forceps were also used to deliver babies, but they came with risks such as bleeding in the baby's skull.

A vacuum invented by an automobile mechanic was also created to help extract babies from their mothers. However, this idea was not popular with everyone.

So, don't think the saw was the only horrifying piece of equipment that found its way into labor wards.

Generally, childbirth is not typically remembered as the most pleasant of experiences. However, there were days when the procedure was a lot more traumatizing than most people could ever imagine.

Final Thoughts On The Original Use Of The Chainsaw for childbirth 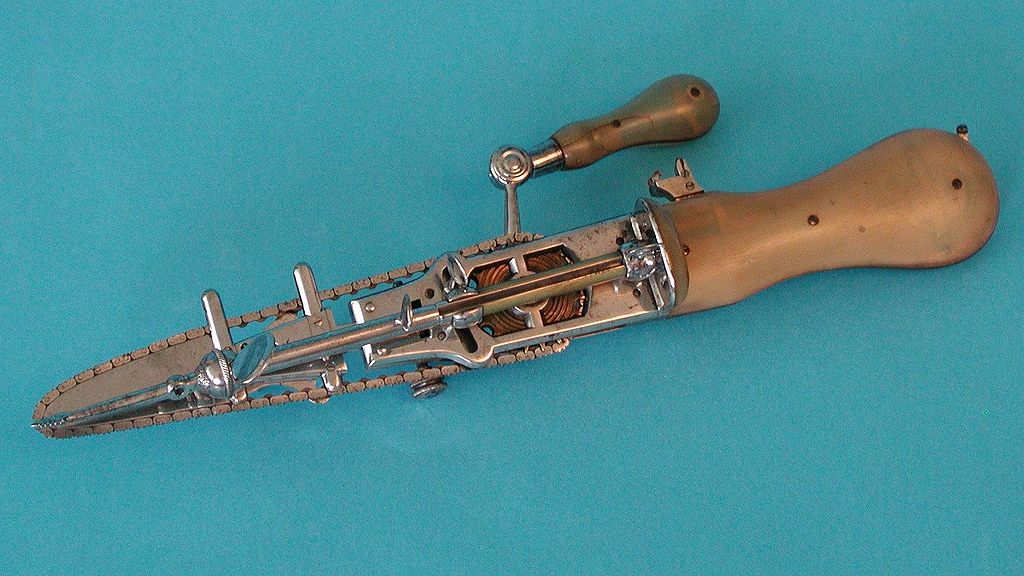 Sometimes, taking a look at history helps us appreciate just how far technology has come. For us to enjoy the birth technology we have today, babies had to be delivered using mechanical chainsaws.

The strangest thing is that the chainsaw improved the techniques doctors were using to perform a symphysiotomy. So, the fact is that this was the best option doctors had, even if the consequences included crippling the young mothers for some time.

Childbirth remains a challenging procedure even today, but there have been substantial improvements in this process. Otherwise, loggers owe ancient doctors a lot of gratitude for inventing the chainsaw.