Loggers were left speechless after finding a dog stuck inside a tree they were planning to cut into pieces. The unfortunate canine became famous as "Stuckie, the mummified dog," and is one of the most famous dogs today.

However, this time, they made a history-making discovery.

The Dog Was 28-Feet Up The Tree 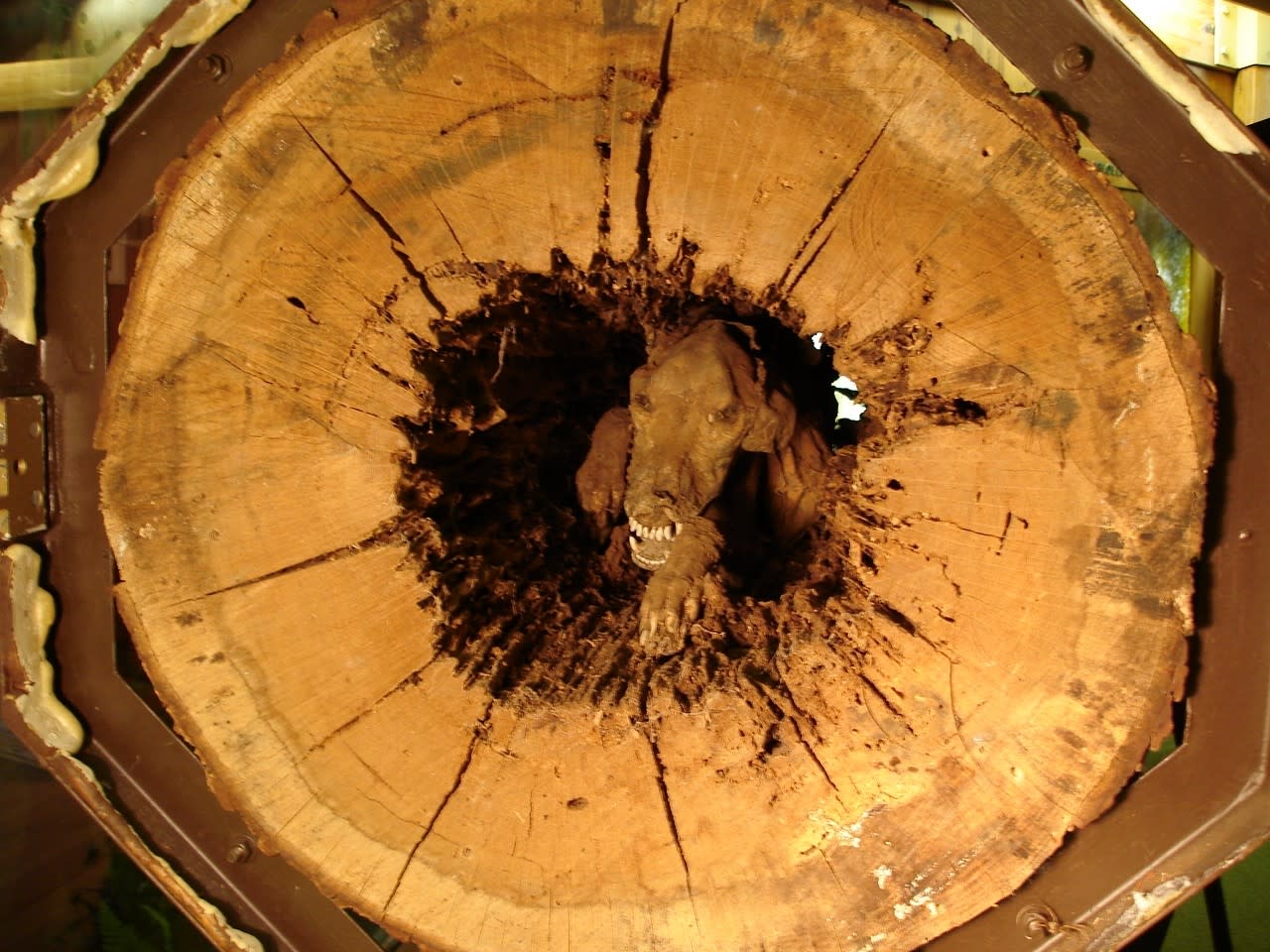 Although this strange discovery was made back in the 80s, it baffles people to this day. The dog was found 28 feet above the ground.

Clearly, it was quite motivated to catch its prey for it to climb that far up the tree.

The loggers who found the dog were working with The Georgia Kraft Corporation. They were cutting down trees in southern Georgia when they stumbled on Stuckie.

They had cut off the top of a chestnut oak tree, and when loading the log to a truck, one of them took a look inside the hollow trunk when he saw a perfectly mummified white and brown dog.

The dog was lucky, as it was just a few inches from being turned into mulch by the loggers' saw. On the other hand, the loggers were 20 years too late to free him while he was still alive.

The Dog Likely Got Stuck Inside The Tree In 1960 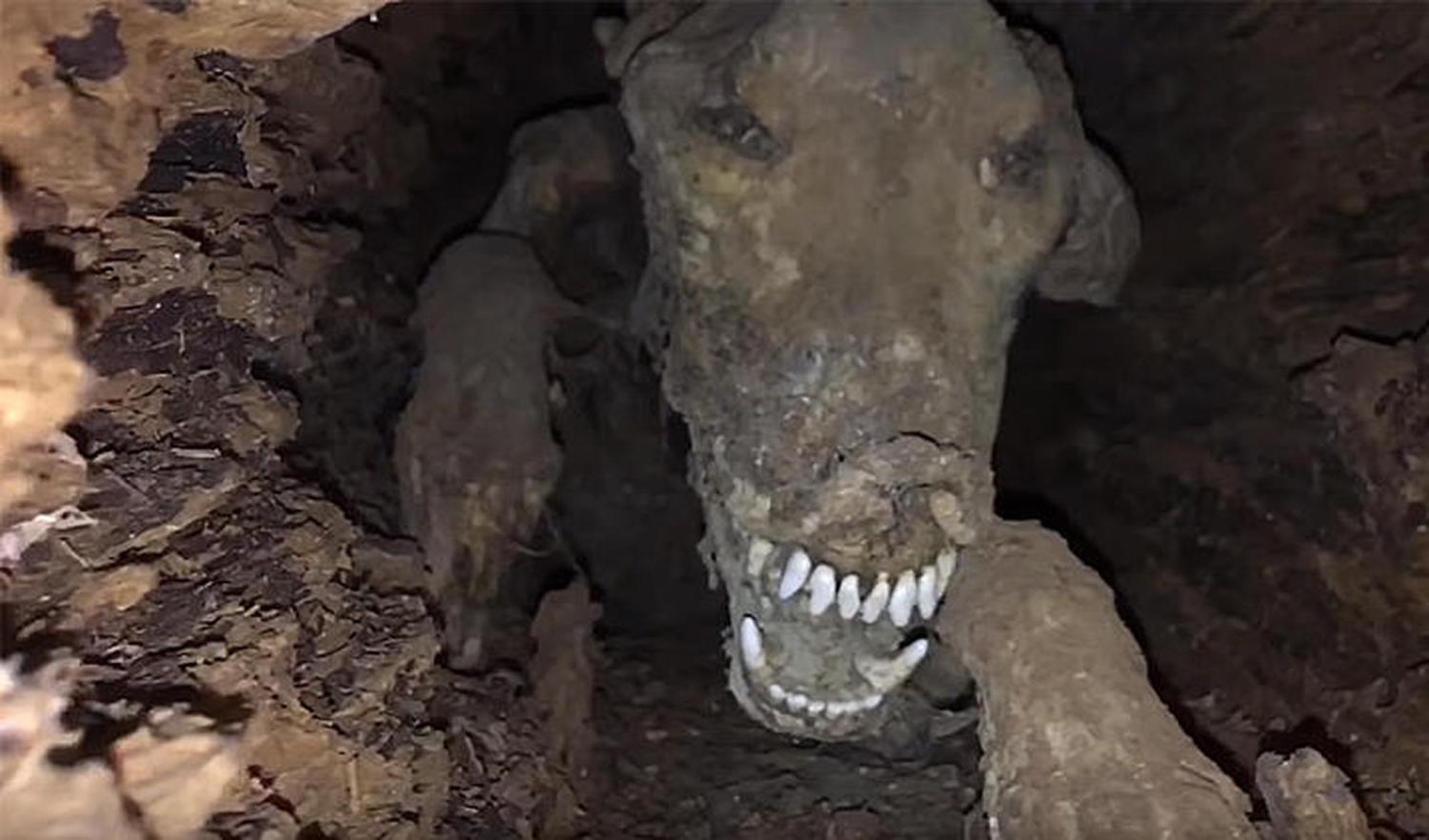 According to expert estimates, the dog likely got stuck in the tree at around 1960. Still, some argue that the dog could have been stuck inside that tree for a lot longer.

After experts had a closer look at the remains, they estimated that Stuckie, the dog was probably a hunting dog from the 60s that had made the mistake of chasing something through a hole in the roots of the tree.

Eventually, he ended up getting stuck inside the tree's deep hollow trunk. Sadly, the dog was unable to get itself unstuck and died as a result.

At the time he got stuck in the tree, he is estimated to have been about four years old.

It is believed the dog met with his ill-luck while going after a raccoon. Its teeth were still bared when the loggers found it.

This indicates that the dog probably died in a desperate fight for survival once it became aware of its unfortunate predicament. Stuckie lost his life during a petrified struggle to escape its terrifying trap.

His prey got away, but he couldn't. The poor dog clearly starved to death while he was stuck inside the log.

Stuckie was identified as a hound. Unfortunately, the dog's owner remains unknown.

Strangely, The Dog Did Not Decay 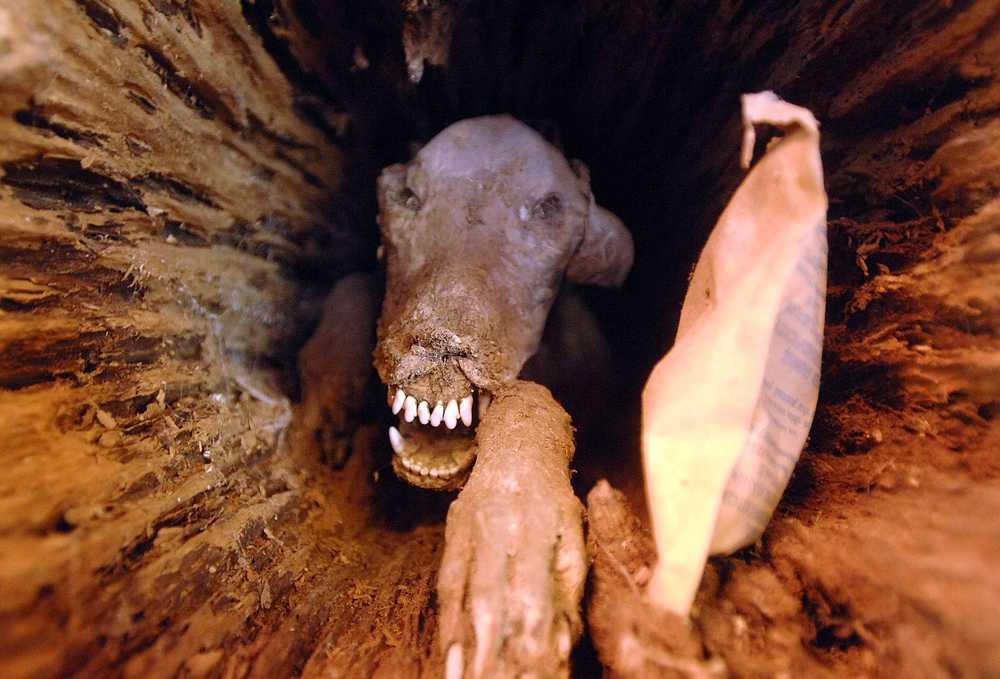 The conditions around the dog after it died meant that it did not decay. For this reason, not even other animals could smell it and therefore try to get to it.

Professionals offered clues into why Stuckie did not decay and end up as a pile of bones as everyone would have expected.

Apparently, the chestnut oak is perfect for mummification as it contains compounds known as tannins. Tannins are used to treat pelts, and that keeps them from decaying.

That is because these compounds have the ability to dry out the surrounding area. In other words, tannins act as a natural desiccant.

A desiccant is a substance that absorbs moisture from the surrounding area and dries it out.

That can slow down the decaying process, and in Stuckie's case, it completely stopped this process and mummified him. That is why the dog was still preserved in such a good condition when he was found.

These tannins must have seeped onto the dog and kept it from decaying by hardening its skin. The tree also offered a dry environment that kept the dog free of moisture and reduced its chances of decomposing.

This unique combination of circumstances inside the oak tree turned it into a wooden tomb that offered the same mummification properties achieved by the Egyptians.

Consequently, this unfortunate trap for Stuckie ensured his place in history after he was discovered several years later. 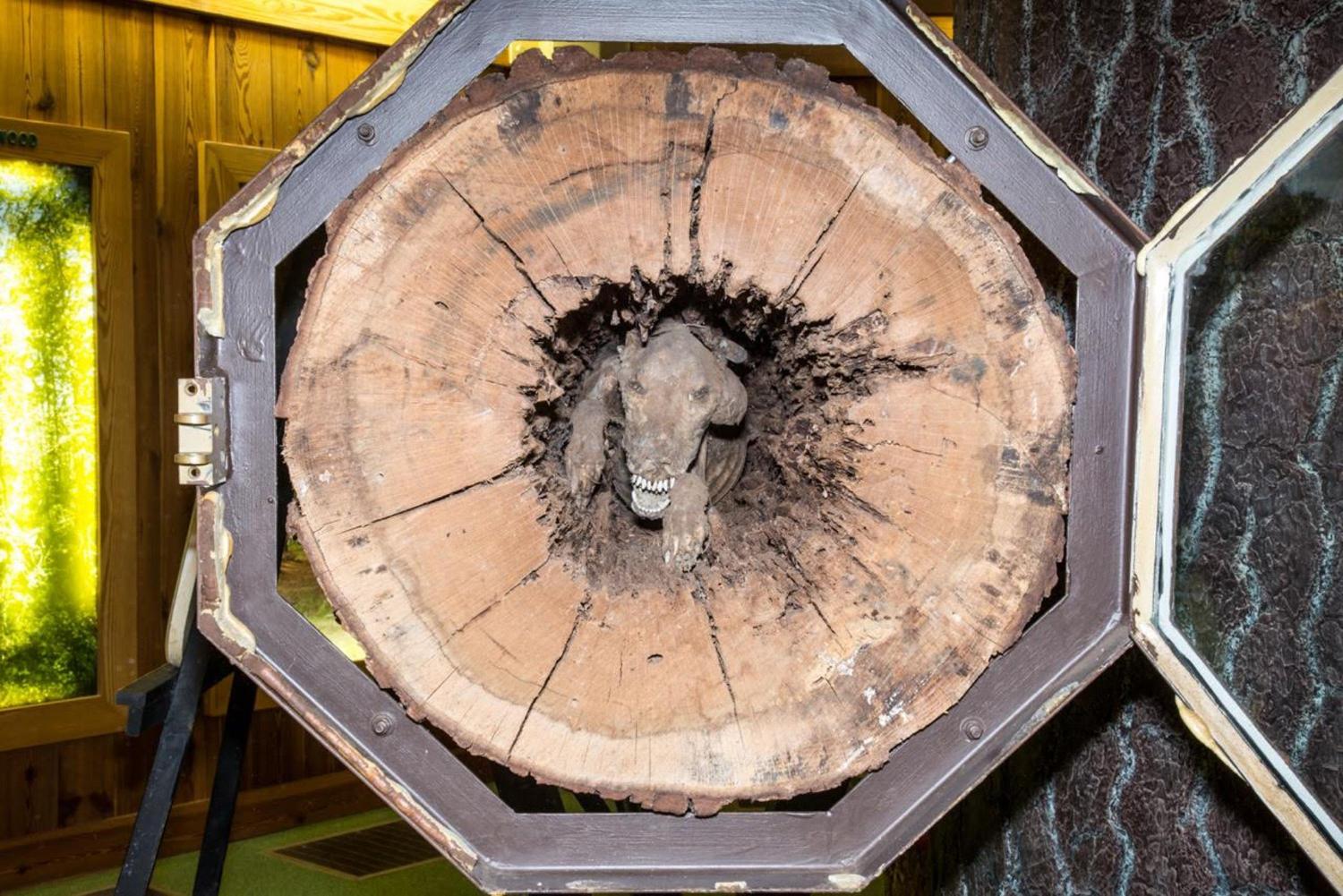 After an animal dies, the body loses control of the microbes that exist within its body.

These tiny microorganisms go rampant and start to consume the body. The microbes grow and reproduce and take over the body.

Eventually, other creatures and organisms such as fungi, bacteria, and insects come in and start eating the remains. Luckily for Stuckie, this never happened.

The dog was stuck so high up in the tree that few organisms could reach it or smell it.

According to experts, the tree offered something of a chimney effect because the wind blew upwards, making it harder for the dog to be detected.

This effectively meant that the smell of the dog was carried upwards, and it disappeared into the air so that other animals could not smell it. Otherwise, many animals would have wanted a chance to get to its remains, which is typically what happens when an animal dies in the forest or out in the open.

Stuckie Has Turned Into A Star Attraction At The Museum 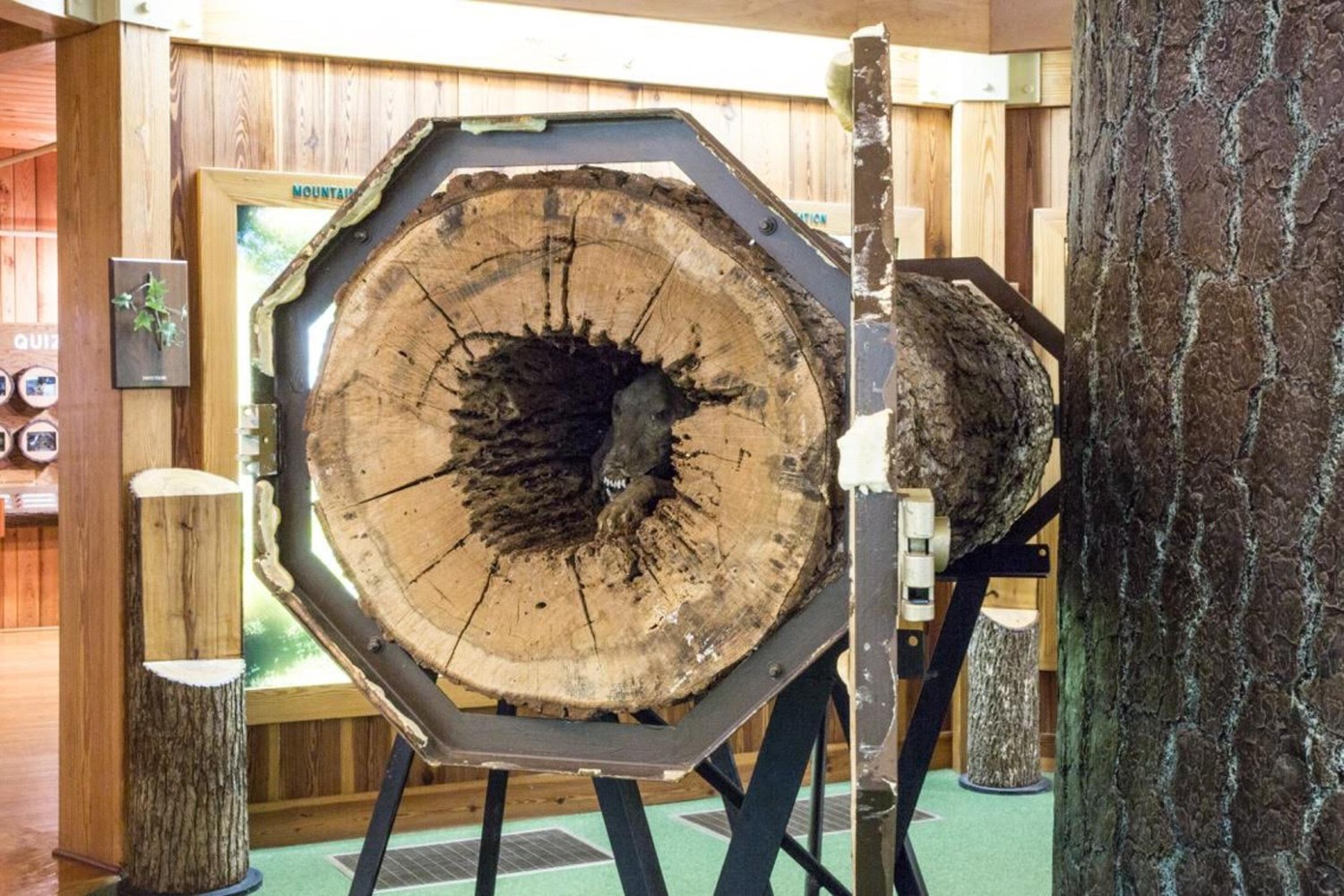 Once the loggers had found the dog, they decided to take it to the museum. By making this decision, they ensured that the world got a chance to see this rare phenomenon for many years to come.

Today, the dog is insensitively called "Stuckie," a name that was decided through a popular vote in a contest held by the Southern Forest World Museum in 2002.

Those interested in seeing the dog can find it at the museum, where it is preserved, still stuck inside the tree trunk. Stuckie is also featured on the Southern Forest World museum's website.

He has become one of the main attractions at the Waycross museum in Georgia, having been stuck in the tree for more than 60 years already.

Many people obviously feel quite sorry for Stuckie after learning of his fate. Nevertheless, that does not keep them from appreciating the fact that he has been so perfectly mummified inside the tree trunk, albeit accidentally.