SpaceX, Elon Musk's famous rocket company, is on track to launch the DOGE-1 Mission to the moon in 2022. The mission is set to launch in the first quarter of next year.

However, if you want to be part of the mission, you will have to pay for the adventure using Dogecoin, a cryptocurrency that started as a prank back in 2013. 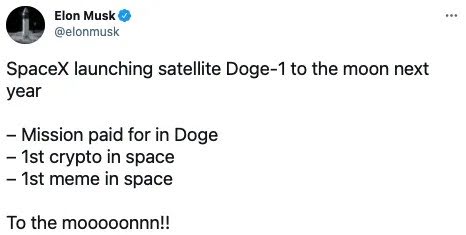 The currency was actually inspired by a meme, which is what makes this space mission so curious.

According to a tweet Elon Musk posted, SpaceX will put a Dogecoin on the literal moon:

However, the fact that he sent the tweet on April 1, Fools Day, made some people a little skeptical.

Dogecoin Has Grown In Value, Thanks To Elon Musk's Endorsement

Elon Musk is a self-proclaimed "Dogefather."

His comments have turned a virtual currency that was once a running joke on social media into something speculators might invest in.

The currency has grown in value by over 800%, becoming the fourth-largest virtual currency in the world with a market value of $73 billion.

The tech billionaire had earlier called Dogecoin a "hustle" during a Saturday Night Live show, and its value plummeted by more than a third as a result.

The Mission Will Demonstrate The Use Of Cryptocurrency Beyond Earth

DOGE-1 will carry a cube satellite weighing 40 kilograms as a payload. According to the Geometric Energy Corporation, the craft will get lunar-spatial intelligence from the sensors and the cameras on-board.

Tom Ochinero, the Vice President of Commercial Sales at SpaceX had this to say in a statement:

"We're excited to launch DOGE-1 to the moon. This mission will demonstrate the application of cryptocurrency beyond Earth orbit and set the foundation for interplanetary commerce."

Mr. Ochinero said that they were excited to launch DOGE-1 to the moon.

However, until now, it is not apparent what the mission's financial value will be.