Throughout history, rulers have used cruel and inhumane methods of punishment to exert power and control. From ancient times to World War II, many powerful leaders have demonstrated their brutality by subjecting people to barbaric punishments, often for their own pleasure.

Scaphism, an ancient method of punishment, was considered one of the most horrific ways to die. It involved being trapped in a boat or hollowed-out tree trunk and force-fed a mixture of milk and honey, leading to a slow and painful death. The use of common food as a means of causing death made it even more terrifying.

In 500 BC, the Persian Empire introduced a method of execution called Scaphism or "The Boats." This brutal form of torture caused intense pain and suffering to the victim until death.

Scaphism – The Most Gruesome Method Of Torture And Execution: 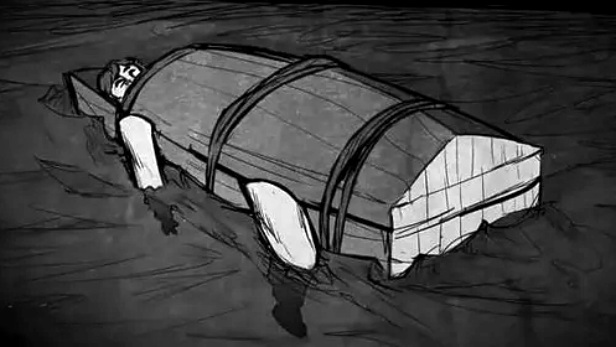 Scaphism was a Persian execution technique that involved trapping the victim in the space between two small boats or two hollowed-out tree trunks. The person would be tied inside the space in such a way that the head, hands, and feet remained outside.

The condemned person would be force-fed a mixture of honey and milk until they developed diarrhea. After that, they would be made to vomit, spreading the mixture over their face, chest, and legs. The person would then be left exposed to the sun or taken to a water reservoir or swamp.

Within a few hours, swarms of insects, such as flies, would gather around the person, settling in dense clouds around their face and stinging their eyes, nose, and mouth. Rats would also come and start attacking them, eating the vomited mixture of milk and honey.

Here's What Makes Scaphism The Most Horrific Form Of Execution:

To make matters worse, additional honey and milk were splashed onto the soft parts of their body, particularly the anus and genitals, attracting more insects. These insects would bite the soft parts, carrying bacteria from feces, causing infections.

After a few days, the wounds would begin to weep pus, attracting even more insects and breeding maggots in their body. The maggots would start eating the flesh, introducing more disease into the person's body.

After that, insects and other vermin would go inside the body and start feasting on the organs internally. The victim would eventually succumb to the slow, painful death caused by multiple bites and infectious wounds. In some cases, parts of the organs would come out of the body through the wounds in the skin.

To prolong the victim's suffering, milk, honey, and water were repeatedly splashed on the person's body and some were poured into the mouth, making it difficult for the person to die of thirst or hunger.

If the crime was considered severe, the guards would continue to force-feed the victim with milk and honey day after day. The most disturbing aspect of Scaphism was that the victim was not allowed to die a natural death under any circumstances.

In 404 BC, the Persian king Darius II passed away, leaving behind two sons, Artaxerxes and Cyrus. Artaxerxes was the eldest and became king, but Cyrus desired the throne and challenged his brother. In 401 BC, the two brothers fought at the Battle of Cunaxa and an arrow by Mithridates hit and killed Cyrus accidentally.

Artaxerxes promised to reward the soldier, but on one condition that the soldier must keep it a secret and let everyone believe that King Artaxerxes II was the one who killed Cyrus, in order to secure his power.

Later, Mithridates forgot about the agreement and at a banquet, he boasted that he was the one who killed Cyrus. King Artaxerxes heard of this and immediately punished Mithridates by sentencing him to death by Scaphism for betrayal.

According to Plutarch in his book "Life of Artaxerxes," Mithridates endured the torture for 17 days before succumbing to a fatal infection.

The Scaphism death penalty was reserved for heinous crimes such as murder and betrayal in Ancient Persia. However, there is debate as to whether this practice was actually used in Persia, as there is no historical evidence to support its existence. The primary source for information on Scaphism comes from Plutarch's "Life of Artaxerxes," which was written nearly 600 years after the events in question. Regardless of its authenticity, it is widely acknowledged that Scaphism is a brutally inhumane method of execution.