Based on the Rick and Morty series on Adult Swim, it seems like there are endless variants of the two characters across the Central Finite Curve. In one of these versions, Rick Sanchez assumes his darkest variant yet, but it also turns out to be his most powerful.

This was not the first time Rick had encountered supernatural beings. At one time, he got into a fight with Zeus during a space battle due to a shared love interest.

Following the fight, this version of Rick was sent to hell. This makes him take advantage of a supernatural ability that changes him into the most powerful version of his character, Devil Rick.

Rick and Morty found themselves in a truly hellish afterlife in Rick and Morty: Go to Hell #5. Naturally, they were trying all they could to get themselves out of place.

Morty stands before Satan, trying to argue his way out of hell by proving how undeserving he is of the treatment. Satan checks the evidence against him from his life and concludes that Morty does not belong there, just as he was trying to claim.

After making this determination, Satan gives him the option of remaining there or getting one wish. Morty opted to make a wish, and his wish was that Rick would join him in Satan's chambers rather than fighting for his life in the bowels of the underworld.

As Morty wished, Rick was quickly teleported to Satan's chambers. However, when Rick finally comes, Satan is immediately made to wish he had chosen to free them both when that was still an option.

Rick attacks Satan by grabbing his throat and choking the life out of him. He kills the devil, turning him into the new ruler of hell as Devil Rick. 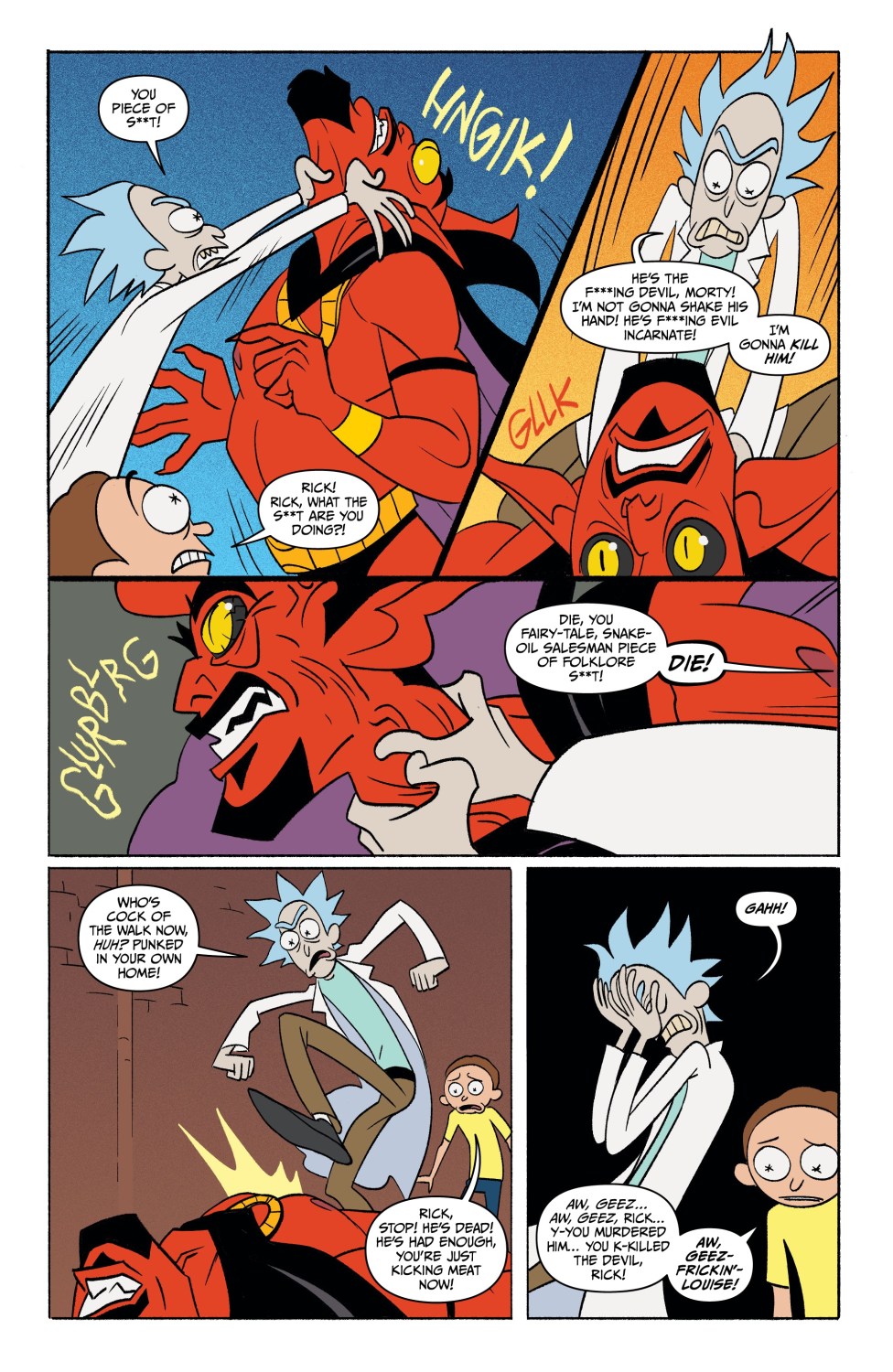 After the devil dies, Rick assumes new powers and introduces a new design. Rick, as usual, tries to use his powers as much as possible.

With his brand new Satanic powers, he restarts the universe and makes himself responsible for every evolutionary milestone known to humankind.

In the end, time catches up with him and takes Rick back to his normal life at the Smith household. Nevertheless, Devil Rick manages to put another ability on display that Ricks in other dimensions could only hope for.

Devil Rick opens a portal, but without the need for a portal gun. Based on previous episodes, it is clear that a portal gun is very important for Rick across various universes.

With this ability, this Rick makes this critical moment seem insignificant because he uses nothing but supernatural powers to achieve the same goal. The ability makes him stand out among other Ricks in a truly remarkable way as far as interdimensional travel is concerned.

Devil Rick can create portals whenever he wants to and restart the universe if he feels like it. On top of that, he is also the smartest man in the universe, in addition to other Ricks in the Central Finite Curve.

So, Rick killing the devil and gaining new abilities proves that Devil Rick is both the darkest and the most powerful Rick wrapped into one.