Resident Evil actress Jeanette Maus lost a battle with cancer after contracting Covid-19, at the age of 39.

Maus lived with Crohn's Disease and was diagnosed with colon cancer last April. She lost the ultimate battle on January 24.

She eventually contracted Covid-19 and it was simply too much for her already fragile immune system.

Her filmography includes My Effortless Brilliance, Dismissed, and Charm City Kings. She will appear posthumously as a lead in My Fiona and as several characters in Resident Evil Village, including the witchy daughters of Lady Dimitrescu.

The news of the death of the young actress came to light a week after her passing. Her fans and coworkers expressed their condolences on social media.

"Jeanette was truly an artist, and felt truly grateful to live as an artist."

"She had an indomitable spirit and was hungry to be the best person, the best teacher, the best friend, and the best actor she could be. The world lost a force of nature and we will be feeling that for a long time."

The actress worked at the Studios helping upcoming stars to understand the true meaning of becoming a movie star, in a famed drama school and studio.

Capcom, the developer and publisher behind Resident Evil 8, released a statement on its Twitter handle to offer condolences to the actor's family and loved ones. 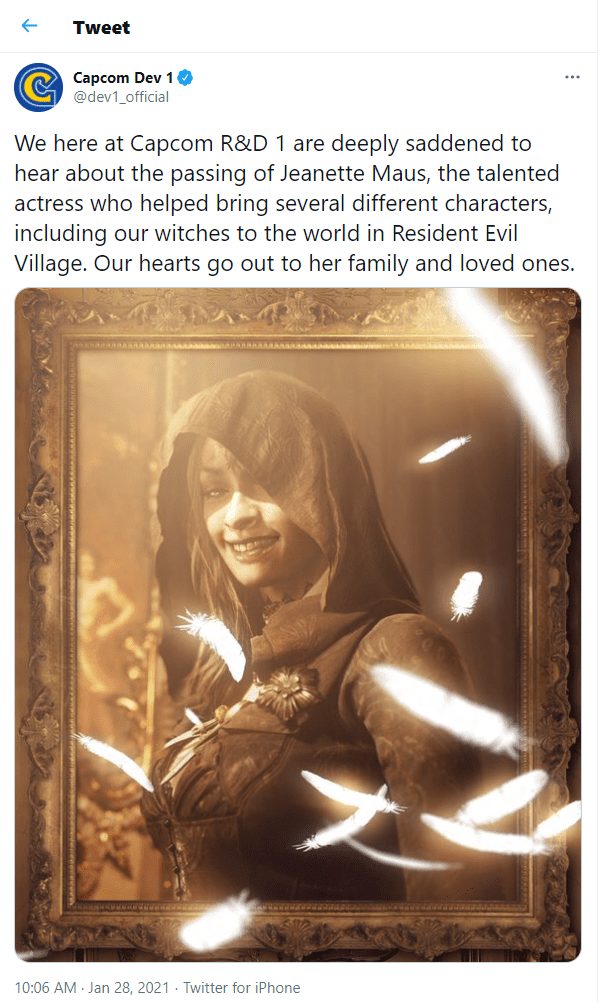 The news of her passing was first revealed by her fiance Dusty Warren. He also explained the reason behind her death. Her GoFundMe page used to help with her medical bills. Now, it's serving her family as they are coming to terms with their loss.

Maus was born in 1982 in the US Northwest. She went to the Cornish College of the Arts in Seattle, where she studied theatre. She was a voice actress, drama teacher, writer, and more.

The New Resident Evil movie will be released in May. It will be heartbreaking to hear Maus's voice. But, even with the trailer, she already won many hearts. This is just one example of a great talent gone too soon.

Our thoughts and prayers are with Jeanette's family and friends.