Ralph Lincoln looks a lot like Abraham Lincoln, the famous U.S. president. Let's face it, even people who can't name more than a handful of American presidents know of Abraham Lincoln.

Today, people who look at Ralph Lincoln can see how much he looks like the famous United States president, although he is the former president's third cousin many times removed.

Although he died more than a century ago, Abraham Lincoln's face is still one of the most famous in the world today. Surprisingly, although Ralph Lincoln is not a direct descendant of the famous statesman, he still looks a lot like him. He is the 11th generation Lincoln, and they share the same great grandfather.

Ralph is a third cousin of Abraham Lincoln.

There is no denying that Ralph Lincoln has a striking resemblance to the late president. However, he did not initially realize this until his mother stepped in and made him know it. She told him to look in the mirror and see it for himself after advising him to get rid of his mustache. 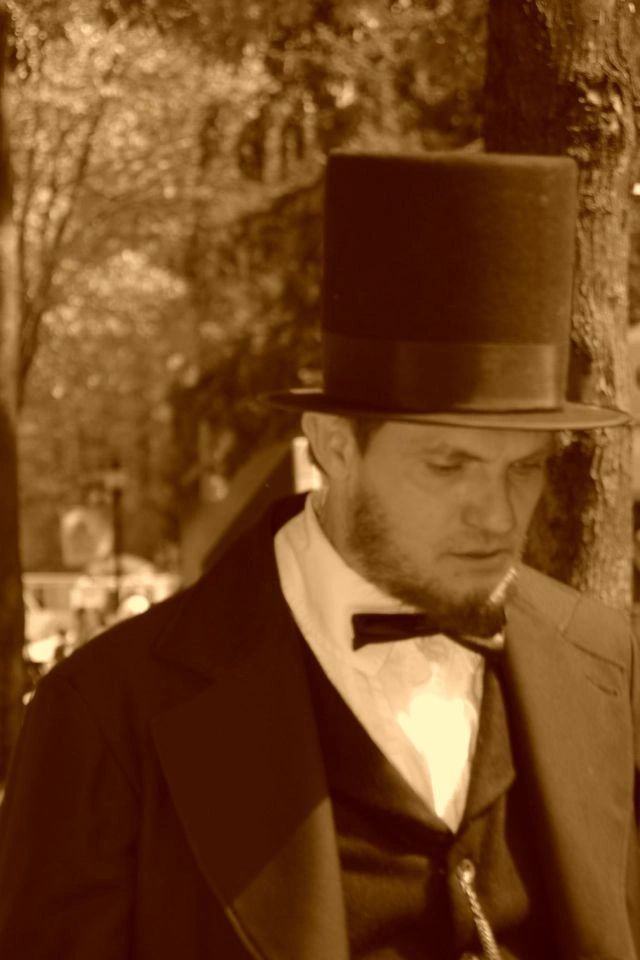 Ralph Lincoln notes that several family members can be found at a cemetery in Fayette County, Pennsylvania. As Ralph describes, Mordecai Lincoln is also among those buried at the "small, obscure" cemetery.

Mordecai served the nation and fought in the Revolutionary War. Ralph Lincoln is carrying on this patriotic legacy by being a member of the Sons of the American Revolution.

In fact, he lives and works in the same place Mordecai Lincoln lived and worked, and that's southwestern Pennsylvania.

Unfortunately, Captain Abraham Lincoln was killed by a Native American as he worked in his field. In response, his son, called Mordecai like Abraham Lincoln's great uncle, shot the attacker and killed him as payback.

However, to this day, there are some inconsistencies about where Captain Abraham Lincoln was buried. Some people think he was buried in Pennsylvania, while others think Kentucky was his final resting place. 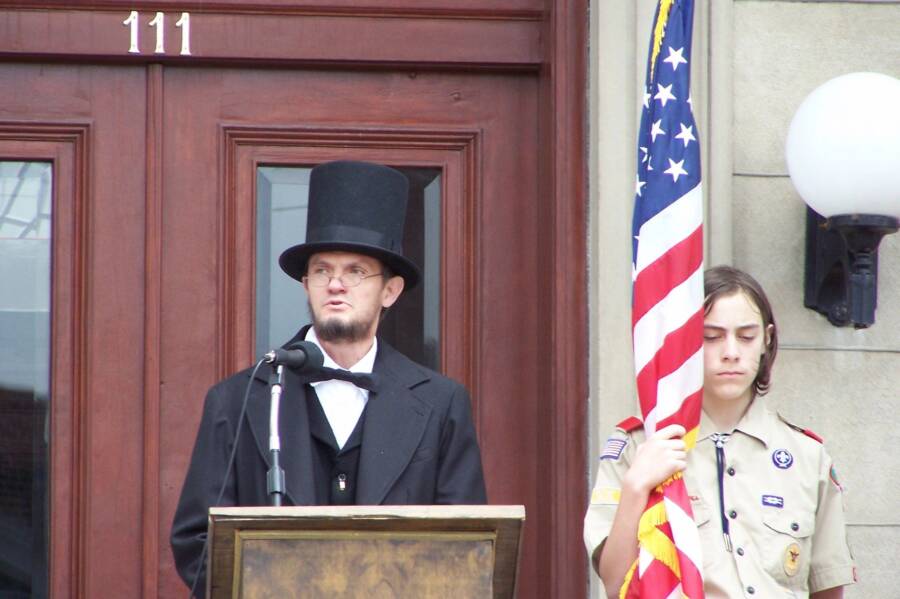 Ralph Lincoln is not just related to Abraham Lincoln, he also looks a lot like him, and both family and strangers take note of this fact. However, when people tell him he looks like Abraham Lincoln, he often asks "which one" because there are many of them in the family.

That said, he is obviously quite proud of his connection to his famous ancestor and likes to refer to him as his cousin, although he is a distant relative.

However, he admits that his family does not make a big deal because they have a famous ancestor. Luckily, Ralph Lincoln is not afraid to explore his connection to Abraham Lincoln.

He likes to speak as much as possible about the former president and honor and inspire using Abraham Lincoln's words.

For this reason, Ralph Lincoln has appeared in many events that are connected to the former president. He has even attended an event at the Ford Theater, where Abraham Lincoln was shot dead by John Wilkes Booth in 1865.

Today, Ralph Lincoln is an expert on all things Abraham Lincoln. He considers his relation to the 16th president of the United States a great honor.

That is also why he is part of The Association of Lincoln Presenters, whose goal is to bring "Abraham and Mary Lincoln to life" and to preserve the famous couple's legacy. The organization has more than 150 Abraham Lincoln lookalikes who give presentations and attend events. 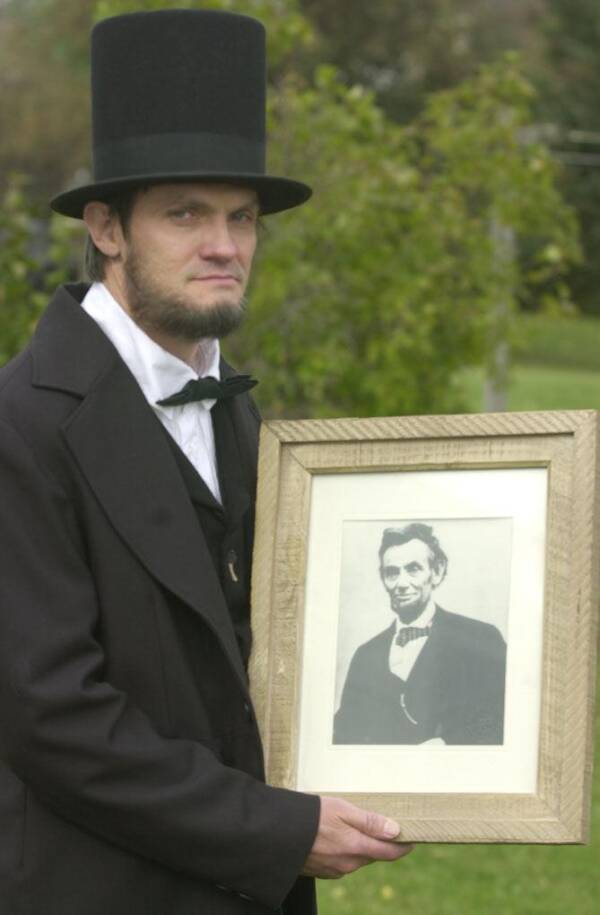 Ralph might be one of the closest relatives President Abraham Lincoln has since the former president has no direct descendants today. Abraham Lincoln had four sons with Mary Todd Lincoln, and three of them died at a young age.

His remaining son, Robert Todd Lincoln, had many children and grandchildren. However, the last relative who could say the president was his great-grandfather passed away in 1981. Before his death, he gave a lot of Abraham Lincoln memorabilia to the state of Illinois.

According to Tom Hanks' son, Colin Hanks, the connection to Lincoln's ancestry is still evident in his "beard situation," whereby he can get a really good beard around his jawline and a less impressive beard on his upper lip.

Granted, there are probably lots of Abraham descendants around since his grandfather had plenty of kids. However, in the meantime, Ralph Lincoln seems perfectly comfortable in being his most outspoken descendant, which is quite fitting considering his uncanny resemblance to the most famous American president.

Due To A Brain Tumor, Ralph Lincoln Probably Knows More About Abraham Lincoln Than He Does About Himself

Strangely, although Ralph Lincoln can tell you almost anything about the former president, there isn't much he can tell you about himself.

Back in the 80s, he suffered from a brain tumor that destroyed most of the memories he had at the time. Even when he looks at old family pictures, they don't bring up any memories - they are just pictures.

If he thought he could avoid the surgery, then the doctor's prediction was even worse because he was told he didn't have a lot of months to live without the operation.

Fortunately, the surgery was a success on many levels. He not only survived the operation but also came out of it without any paralysis. The only problem was that he lost many of the memories he had until that point.

So, in addition to reading up on his famous ancestor, he also has to read his own history. That means he knows more about Abraham Lincoln than he does about himself. Therefore, Ralph Lincoln has to keep a journal of things he had done to ensure he does not forget them.

What makes his relation to the Great Emancipator most apparent is that he looks more like him than probably any other Lincoln ancestors alive today. So, even though he is not a direct descendant, he couldn't look more similar to Abraham Lincoln.