Queen Alexandra's Birdwing (Ornithoptera alexandrae) is the biggest butterfly globally, with a record wingspan of 11 inches. Therefore, seeing this giant insect is quite an experience.

Not surprisingly, to some people, this is not just the largest butterfly in the world but also the most magnificent of its kind.

The insect species belong to the swallowtail family of butterflies, and thanks to its size, the butterfly is also an excellent flier.

The butterfly was named after Alexandra of Denmark, the British queen. She became queen in 1902 after Queen Victoria, her mother-in-law, passed away in 1901.

Queen Alexandra's Birdwing was discovered in 1906 by Albert Stewart Meek. The discovery of the butterfly was funded by Walter Rothschild, a British banker and zoologist. Rothschild hired Meek to find butterflies, and he spent 20 years in Papua New Guinea.

Meek paid particular attention to birdwings because they had vibrant colors and massive wings. He used guns to hunt them down, but the locals preferred using nets made of spider webs.

He used special ammunition to make the butterflies immobile, although that left the insects with holes in their wings. A large Queen Alexandra's Birdwing he shot in 1906 is still displayed at the London Natural History Museum. It has holes and tears in its wings.

Meek also wrote a book in 1913, A Naturalist in Cannibal Land, which focused on birdwing butterflies.

It is also worth noting that Papua New Guinea is not the only country with Queen Alexandra's Birdwing butterflies. These insects are also found on an island off Australia's northern coast.

Although Queen Alexandra's Birdwing butterfly stands out for its size, it is also quite marvelous to look at. The female is larger than the male, and it has large brown wings with cream spots. The body also features a cream color in addition to red fur on the thorax.

The butterflies have a really strange mating ritual. Males have to swarm over forest trees called Intsia bijuga during their bloom. The females will not accept the males unless they do this, and nobody has figured out why this is so.

Otherwise, males hover over the females during mating and shower them with pheromones that induce copulation.

The Life Of A Queen Alexandra's Birdwing Butterfly

At any time, the female usually carries about 15 to 30 mature eggs, which measure about 3.5mm in diameter. Females can lay up to 240 eggs throughout their lives. The eggs have to be laid only on a species of pipevine plant.

After Queen Alexandra's Birdwing larvae hatch, they eat their shells as they are very nutritious. The larvae also eat the pipevine tree where they are hatched, although it is poisonous.

The larva has a black body, although it has a cream-colored spot with wart-like growths, and they also shed their skin many times during this stage of development before advancing into the pupa stage.

In the final stage, the bodies of the caterpillars break down before they metamorphose into adult butterflies. The metamorphosis can take an entire month. In total, the butterfly has a life cycle of seven months, and only about three of these months are spent in the adult stage.

To gain the strength necessary to fly, the adult butterfly has to pump its wings after emerging from the pupa stage so that fluid can flow through its veins.

Adult butterflies drink nectar using their proboscis, tongue-shaped like a straw. The proboscis uncoils when feeding and coils up again once the insect is done feeding. The insects like hibiscus flowers, and because the butterflies are diurnal, they are active during the day.

Queen Alexandra's Birdwing is poisonous, but it gets the poison from the pipevine plant. For this reason, animals that feed on this butterfly end up getting seriously sick, although they don't usually die. For that reason, many potential predators avoid the butterfly species as well as any other butterflies with similar markings on them. 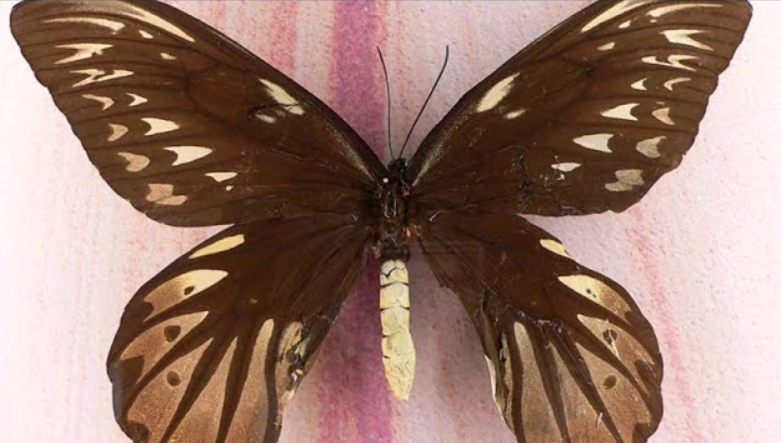 According to recent research, there has been a sharp decline in the population of Queen Alexandra's Birdwing butterflies. The insects are still restricted to Papua New Guinea forests.

The butterfly does not have a lot of predators to worry about, but they often get caught on spider webs where birds prey on them. Ants and other bugs also eat their eggs, and their larvae are preyed upon by lizards, toads, and birds. Still, humans pose the greatest risk to these rare butterflies.

One of the things contributing to the endangerment of the species is the demand for the butterfly species in black markets. Queen Alexandra's Birdwing is incredibly popular due to its size and color.

Additionally, encroaching humans have done a lot of damage to their habitats due to palm oil farming.

The palm oil industry has been thriving in the area they were initially found because the oil has multiple uses, including making soap and cooking oil. As a result, thousands of acres of land that served as a habitat for the butterflies have been destroyed.

Since Meek researched the Queen Alexandra's Birdwing butterflies more than a century ago, little further research has been carried out on them; and it wasn't for lack of trying. There are just too few of these insects left to understand them properly.

Sadly, their numbers have been going down since 1996. In fact, this is why it is not even clear what their quantities might be at the moment.

In 1992, an attempt was made to quantify them, but only 150 butterflies were seen in a 10-day period. The number was much lower many years later. In 2008, only 21 adult butterflies were counted in a period of three months.

The reduction of these insects has brought about many challenges, especially the destruction of their habitats.

Conservation efforts are necessary to ensure that the butterfly species do not go extinct.

Some experts have suggested trying to exploit the financial benefits the butterflies may offer. In particular, landowners who live close to the habitats of these insects could be incentivized to grow plants that attract butterflies. The insects can then be sold off to museums and conservatories.

The truth is that, without any interventions, Queen Alexandra's Birdwing butterfly might end up becoming extinct like hundreds of other tropical butterfly species.

Fortunately, today, the butterfly species are protected by international treaties. Papua New Guinea also has legislation that seeks to preserve the insect species. Those in violation of these laws face fines and other forms of punishment.