The 50s gave us a lot of great things, including amazing music, classic cars, post-WW2 peace, and of course, the timeless poodle skirts. This piece of clothing defined women's fashion in the 50s and 60s.

The skirt was meant to swoosh elegantly when dancing and to lie down perfectly when sitting down. Given that this skirt was important during many fun occasions, it's no surprise that it has never been forgotten to this day.

Poodle skirts feature a solid color with a design attached to the fabric, usually a poodle, which explains the name. These cutouts were sewn and ironed onto the poodle skirts, matched perfectly with sweaters, bobby socks, saddle shoes, blouses, or knit tops.

A Trend For All Ages 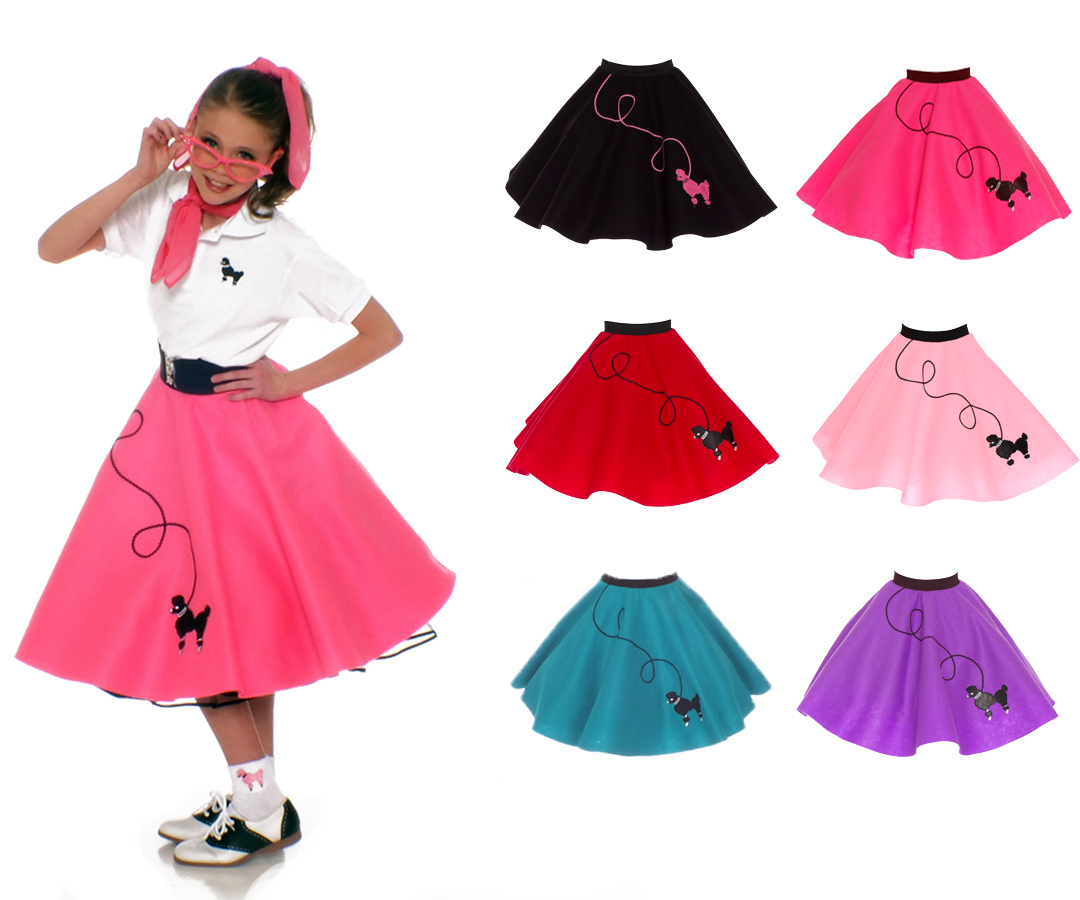 Young women and girls usually preferred plain knit tops or cardigan sweaters as the skirts matched best with chiffon neck scarfs. During fancy events such as dances, the skirts were matched with pearl necklaces, earrings, brooches, and other accessories like a cinch belt, a matte leather belt, or a shiny vinyl belt.

Back in the day, wearing cat glasses with these skirts was also quite popular.

Later, although the name poodle skirt remained, the patch was replaced with cars, cartoons, funny sayings, cute animals, martini glasses, butterflies, seasonal themes, toys, vines, the Eiffel tower, telephones, flamingoes and even flowers. The design did not have to lie flat on the fabric: textured versions of the skirt also existed. 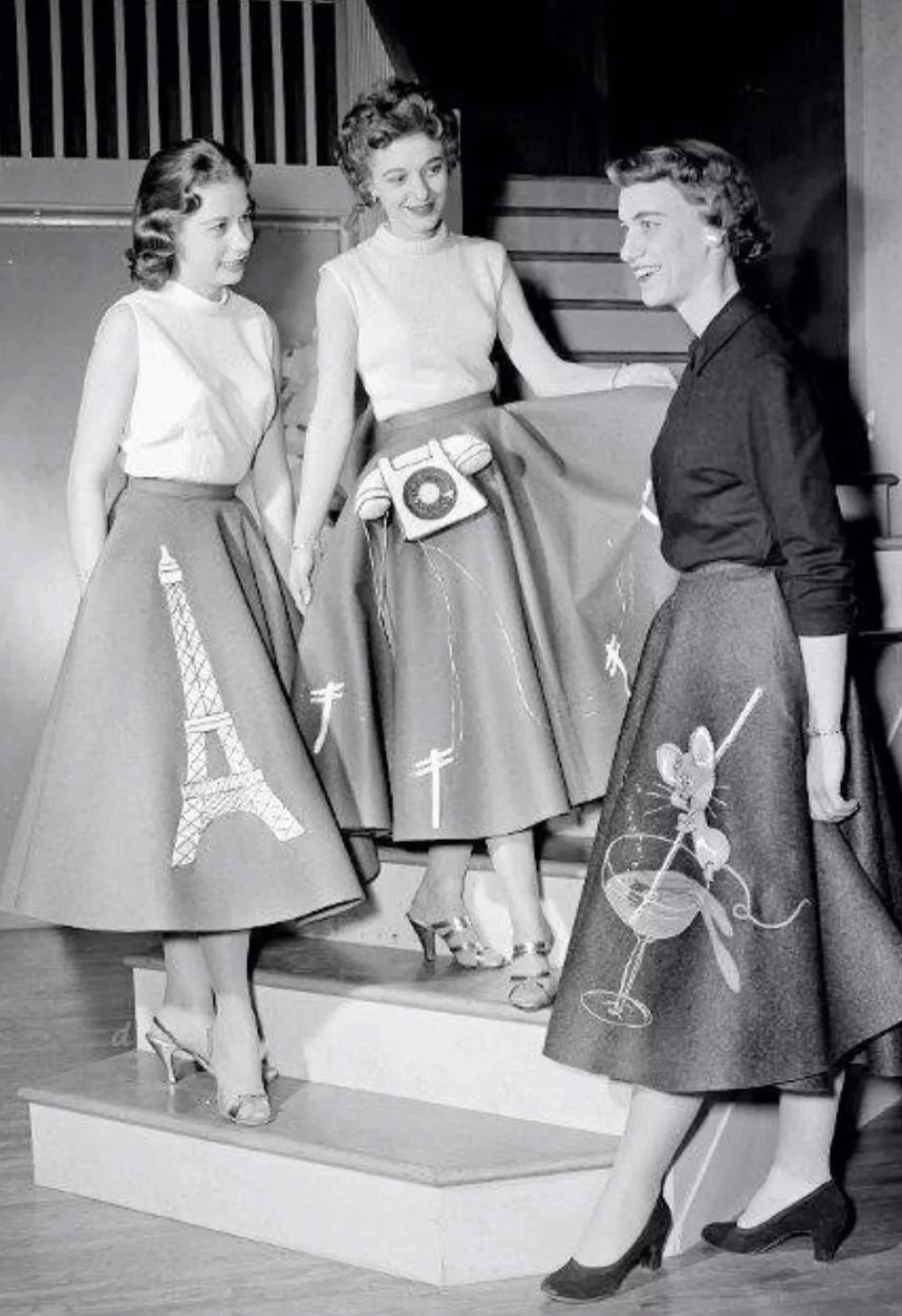 Typically, these skirts have their hemlines at the knee level or slightly below it. They also had an exaggerated feminine silhouette, and women and girls could not get enough of it after the Second World War disrupted the fashion world in the early 1940s.

When poodle skirts first came out, they were a hit with teenage girls. They would even put them on when attending school dances.

Eventually, women of all ages could be seen wearing poodle skirts.

A Brief History Of The Poodle Skirt 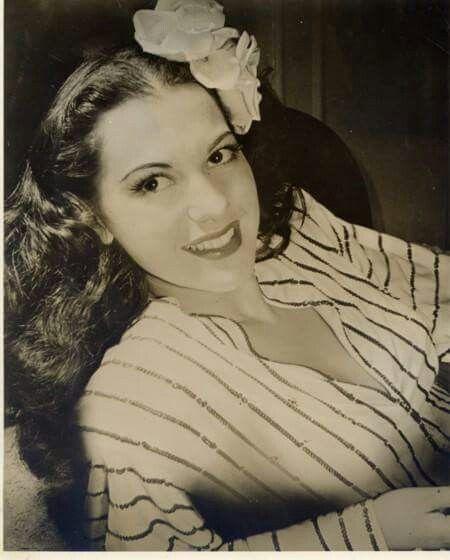 The poodle skirt started in the US in 1947, and it was designed by Juli Lynne Charlot, an actress and singer. In the same year, Christian Dior unveiled the New Look.

Juli Lynne was wondering how to get a Christmas skirt fast in order to attend a Christmas party. Unfortunately, she did not have the cash to buy something trendy.

Luckily, her mom had a factory that used felt, and that gave her an idea:

"I cut the circle out of felt, which allowed me to cut a complete circle skirt without having any seams."

Her ingenuity resulted in her making a felt skirt. At the party, she got complimented on it several times.

How Did The Poodles Come About? 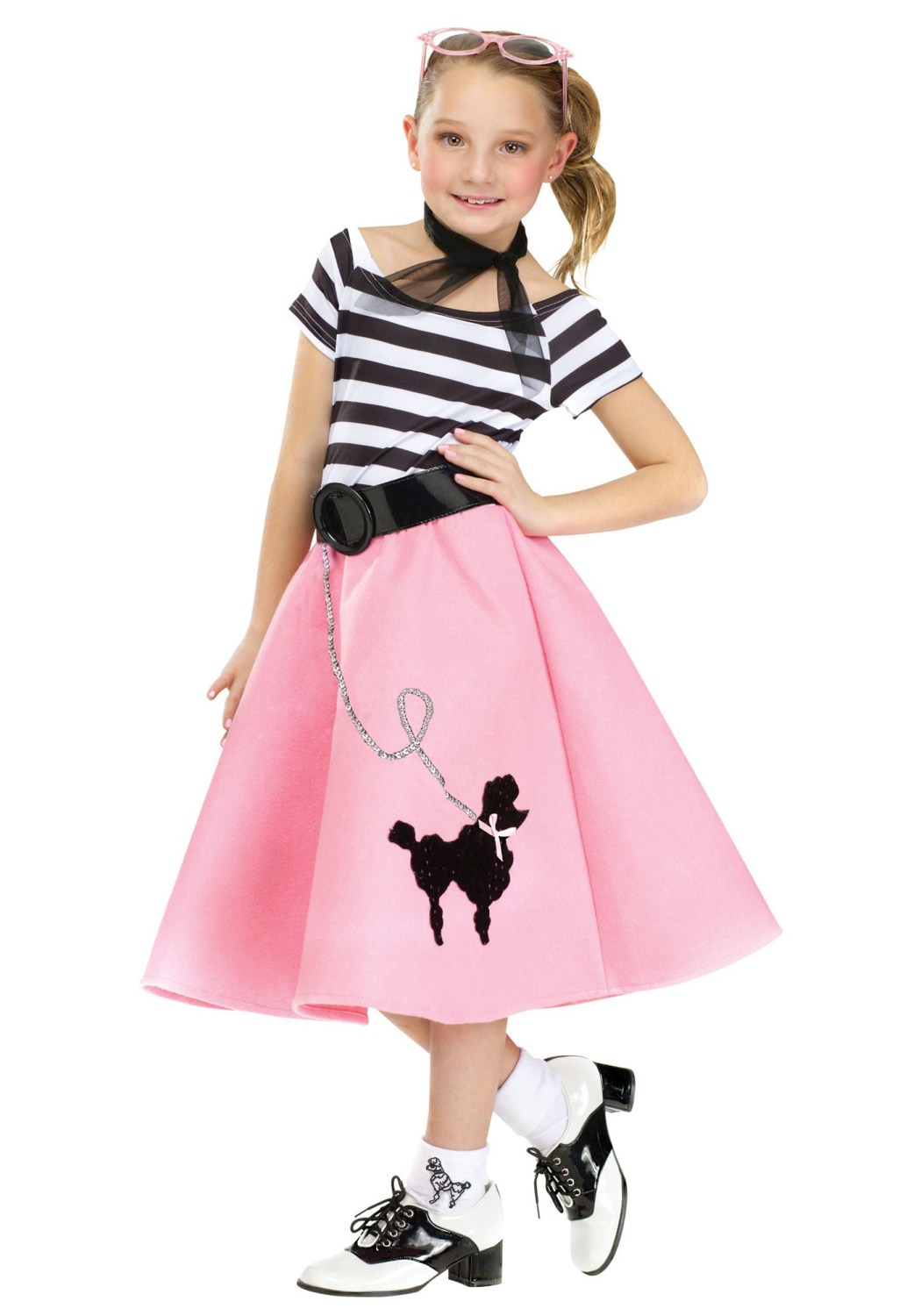 Later, the skirt became quite popular, and since dogs were popular, Juli Lynne was asked to add three dachshunds to the skirt representing three personalities.

Women would often be seen walking their cute little dogs on leashes, often a coiffed poodle on a leash in those days. That is how the idea started.

The first dog was a flirty girl, the second a snobby girl, and the third a male attracted to the flirty girl dog. Unfortunately, due to the tangled leashes, the male dog was stuck next to the snobby girl dog.

The idea was to create a design that told a story so that the skirt would be a "conversation starter" for the salespeople as they sold them to customers.

In those days, people made poodle skirts at home since the materials were not difficult to come by, making them easy to make.

A week after the skirt debuted, Charlot sold the design to companies that produced the skirts on a massive scale. Ultimately, she started her factory, and it was in business until the 80s. 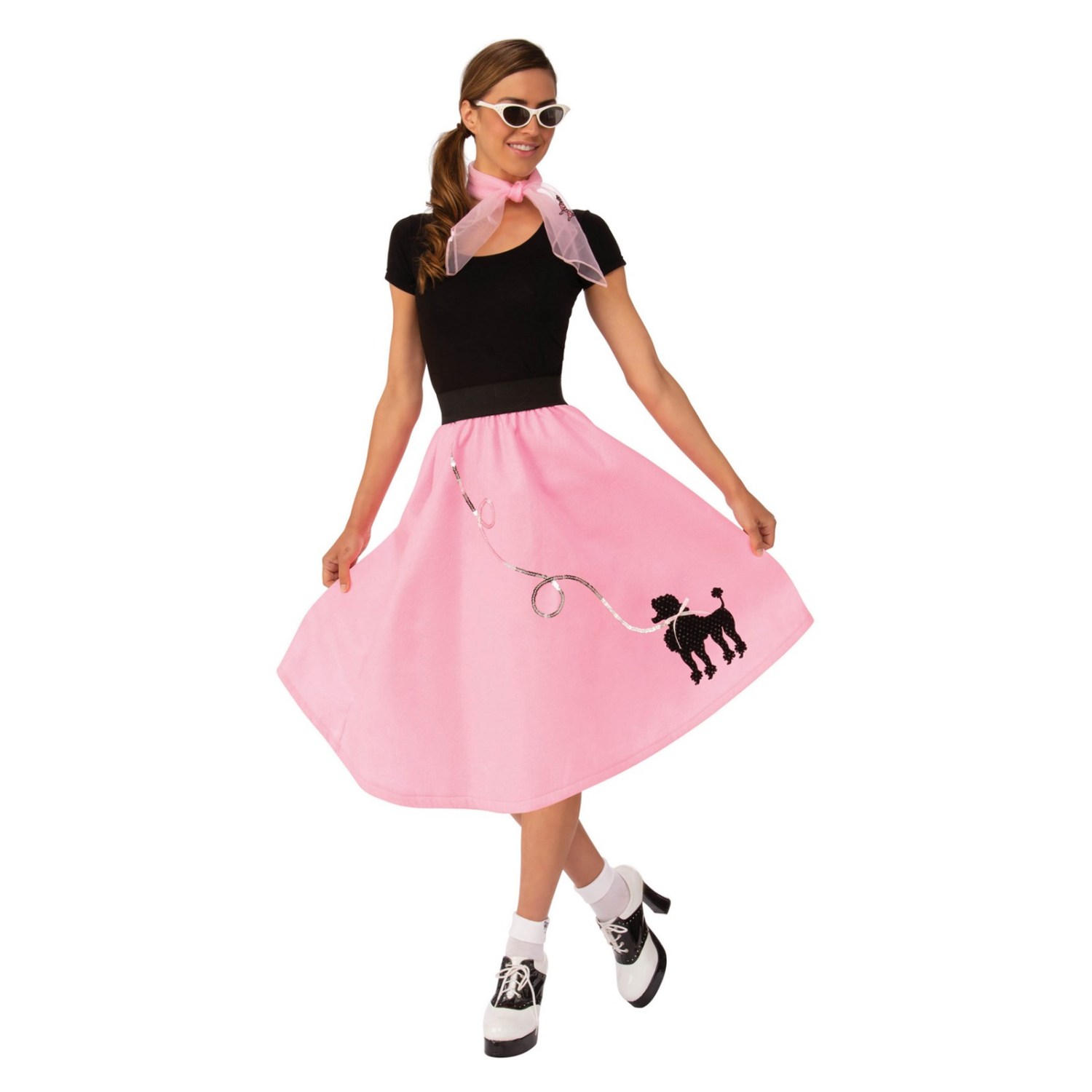 Eventually, movie stars would wear the poodle skirt, which was also often featured in adverts and magazines. The skirt was especially popular among teenage girls, and it earned the title of being the "first teenage fashion trend," probably because the skirt was perfect for dancing.

The fact that the skirt could be customized greatly also helped since the girls could wear skirts that reflected their personalities.

In 1953, Bettie Morrie, a designer, made big skirts that featured a backgammon game stitched to the felt. The game pieces were put in a decorative pocket, making these skirts very functional at parties. 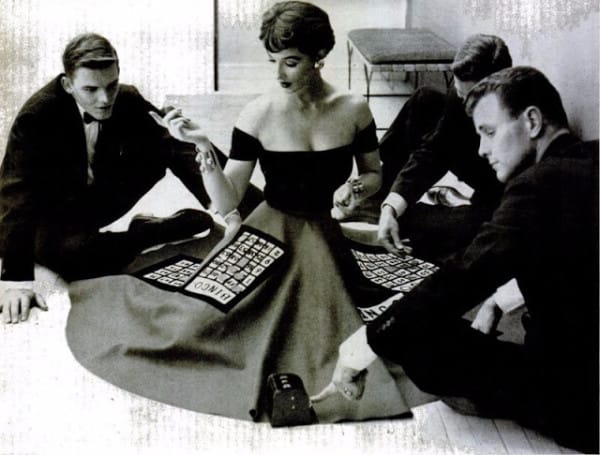 Typically, both the young and the old liked the poodle dresses. However, young girls preferred cute designs like poodles, but adult poodle skirt wearers preferred elegant and abstract patterns and designs on their skirts.

Therefore everyone could get in on the trend while still looking their age. 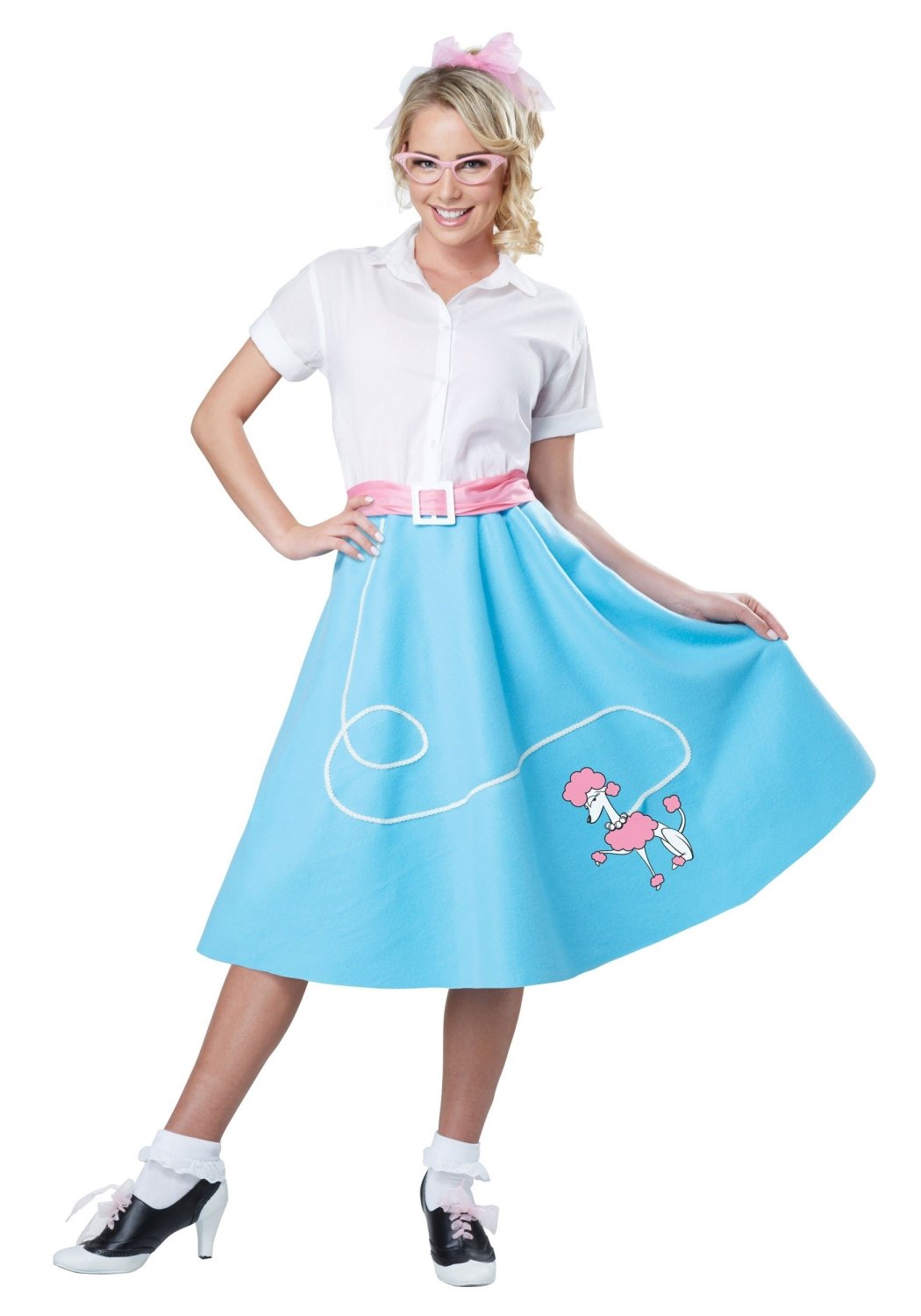 Today, people are wearing poodle skirts as a retro outfit, given all the 1950s nostalgia it brings back. However, the newer skirts are shorter, although the original waistband remains.

The skirts are still made of felt, and they witnessed a spike in popularity in the years 2009 and 2010. These days, the poodle skirt costume is very popular during Halloween parades and other occasions.

However, this skirt can look good for dances, plays, pageants and even weddings. Without a doubt, a poodle dress is a timeless fashion trend.

Where To Get Them 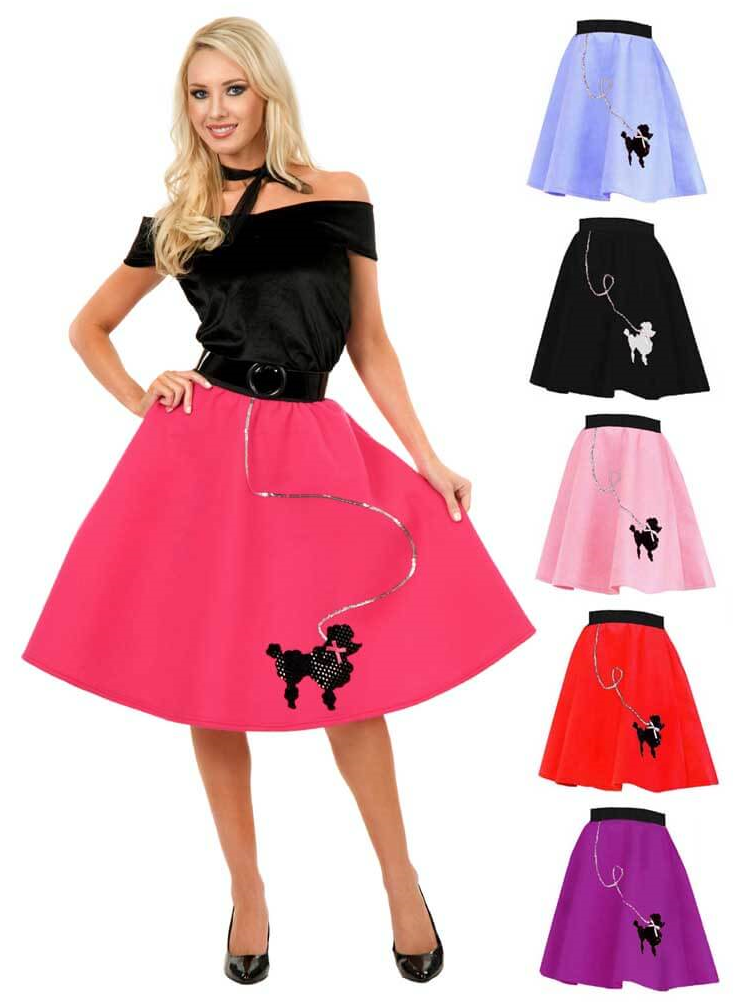 If you are wondering how you can get hold of a poodle skirt, then know that it's very easy. On popular retail sites like Amazon, you can find dozens of poodle skirts to choose from, including any accompanying accessories such as a chiffon scarf, eyeglasses and a cinch belt.

You are also not stuck with poodle decorations only, as many types of designs can be attached to the skirts today. However, lovers of the original poodle applique can still have their wishes come true.

However, modern skirts feature a single poodle at the corner instead of the three poodles.

If you have some faith in your sewing skills, you don't have to order a poodle skirt since you can make one yourself. The skirt became so popular back then that teenage girls with little to no sewing skills could easily make the skirts themselves within a few hours.

These days, you don't have to use felt only, as you can get the same results using silk, cotton and other fabrics.

The originals are rare today, and if you own an original Juli Lynne Charlot poodle skirt, you can sell it for hundreds of dollars online. The chances are that it will continue to grow in value over time, so take good care of it.

Luckily, these days you can get a poodle skirt at any budget level. You can even get your hands on a 50s poodle skirt set for about 20 bucks.

When the original poodle skirt came out, it was lots of fun. That explains why this fashion trend is yet to die off several decades later.

The vintage poodle skirt managed to bring women of all generations together after the tension of the war eased, and their iconic and fun design has kept them around for all that time.

The poodle skirt is an outfit for every occasion, and that's pretty amazing.