A group of deranged teens was caught on camera laughing and taking videos as they beat an elderly man to death with a traffic cone.

Authorities are on the hunt for seven teenagers accused of fatally beating a 73-year-old man with a traffic cone in Philadelphia.

The surveillance footage of the incident, which the police department released, shows a group of teens chasing Lambert down the 2100 block of Cecil B. Moore Avenue in the city's northwest corridor.

One teen chased lambert across the street and struck him with a traffic cone.

The impact knocks Lambert to the ground. While he was down, a female teen picked up the same cone and chucked it at him again. 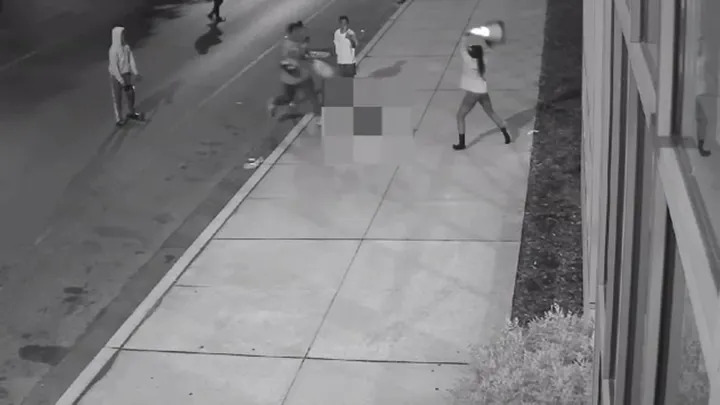 Lambert appears to get up and flee down the sidewalk and away from his attackers. However, the same teen picks up the cone once again, chases him down the sidewalk, and then throws the cone at him, hitting him for the third time.

Other group members filmed the incident as they smiled and laughed throughout the attack.

However, one of the females appeared taken aback by the incident and held her hands over her mouth in a gesture suggesting shock.

After the attack, the teens left the scene as one of the males pedaled away on a scooter, amused with another male companion.

In a statement, police said:

"The teens struck the victim several times with objects, knocking the victim to the ground and causing injuries to his head."

"The victim was transported to the hospital where he died of his injuries the following day."

It is unclear what happened in the moments leading up to the attack or whether the teenagers knew the victim.

Relatives of Lambert told news outlets that they had seen Lambert — also known as "Simmie" — hours before the incident and couldn't believe kids attacked him.

Lambert's niece, Tania Stephens, said in an interview with the New York Post:

"I'm sick to my stomach over this. We all can't stop crying."

"Who does this? Anyone normal doesn't beat up and kill a senior citizen walking down the street."

"Their parents should come forward. Something is very wrong when kids are out at 2 a.m. beating and killing an old man…"

At the time of writing, none of the assailants had reportedly been arrested. All seven teens present during the attack are now "wanted."

Philadelphia Police Department has even offered a $20,000 reward for information on the teen's whereabouts.