Bourdain spent four years trying to get to Iran due to constant conflicts between this country and the West. He finally did with his TV docu-series Parts Unknown.

Before Bourdain stepped into Iran, two of his on-camera guides, journalists Jason Rezaian (an Iranian-American correspondent for the Washington Post) and Yeganeh Salehi (an Iranian contributor to United Arab Emirates newspaper The National), were imprisoned by the Iranian government.

They were later released, though, during the filming, Bourdain did state the following:

"At this moment, as I read these lines, Jason and Yeganeh are still prisoners. Somewhere. Their future, the reasons for their arrest, are still unknown."

Though the trip was full of uncertainties, Bourdain and the people of Iran had a natural connection. But how was the kitchen? How did Bourdain feel, what did he expect?

Here's Iran in the words of a late chef, and we'll kick off the list with a fantastic quote that pretty much sums up the whole trip:

"It's also a place that can warm your heart one day and break it the next."

Bourdain faced some harsh criticism on Twitter due to the conflicts between the States and Iran. However, the chef was having none of it, so he responded:

"And to all the offended: I guess we shouldn't show people Cuba, Saudi Arabia, China, Russia, Congo, or anywhere we find policies repugnant?"

His shows weren't about politics, but foods, spirits, people, customs, everything that you, as a tourist, might be interested in.

When he arrived, Bourdain said: 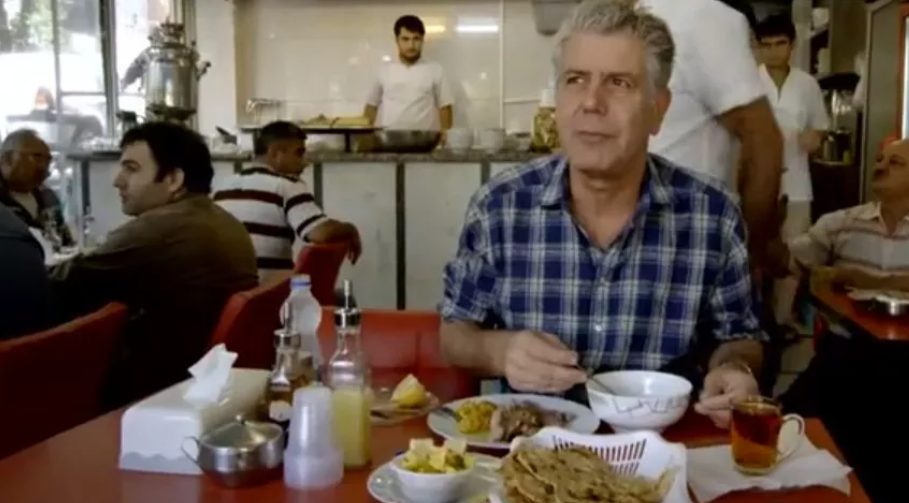 "I am so confused. It wasn't supposed to be like this — of all the places, of all the countries, all the years of traveling, it's here, in Iran, that I am greeted most warmly by total strangers."

The chef felt the place is full of familiarities:

"There are neighborhoods of Rome this feels a lot like."

"Chelow kebab wouldn't be complete without Persian rice: fluffy, long-grain, perfectly seasoned with saffron, the rice in this country is like nothing you've ever had."

Regarding the cultural barriers and having fun in Iran the rock chef stated:

"So, how does one have fun in Iran these days? This is a line that is constantly being tested. Alcohol is, of course, forbidden. You can get away with listening to rock or rap, sort of — sometimes. But you cannot yourself rock or be seen to visibly rock."

"Despite all permits and paperwork being in order, we're detained for several hours. This sort of harassment is a daily part of life for Iranians."

Tony really had no filter.

"People have been ridiculously nice to us. Aren't you guys supposed to be the Axis of Evil?" 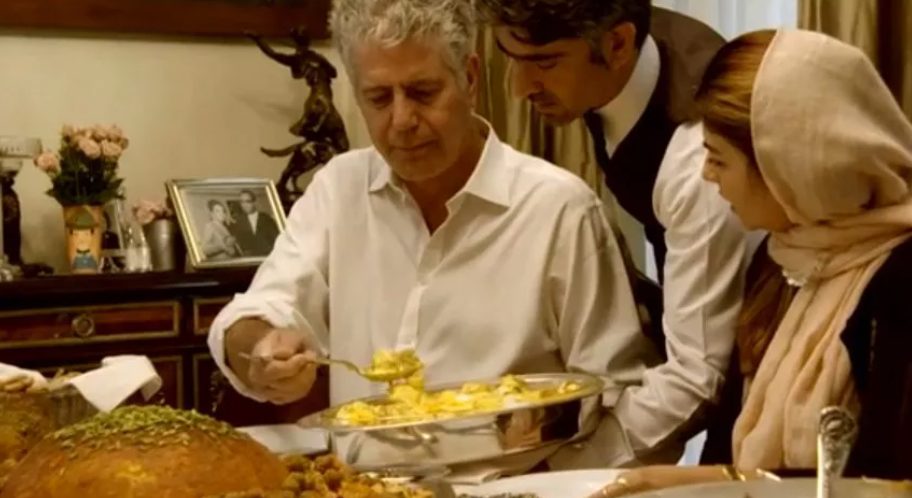 The best Iranian food you can find is not in some restaurant. As Bourdain explained:

"This is a land of secret recipes, passed down within families like treasured possessions."

Sneaky Bourdain was almost in disbelief regarding the hospitality:

"There are very sophisticated, very time-consuming dishes to prepare, always from scratch, and always in excess of what you could possibly need. You tend to kill your guests with kindness around here."

Sarcastic and witty, in this episode of Parts Unknown, as the crew filmed a colorful cafe. Bourdain stated:

"I'm guessing from the decor this is a former wrestler's hangout?" 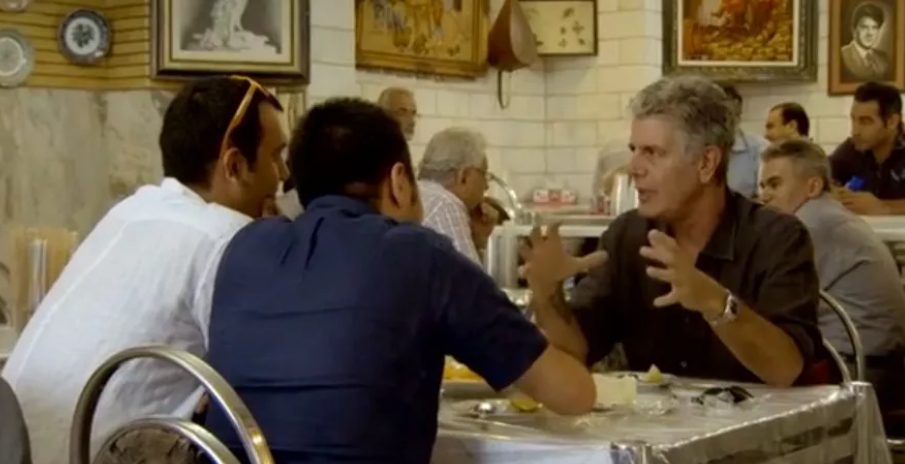 "Biryani — maybe you know the word. But this doesn't look like any biryani I've ever had. Minced lamb shoulder, onion, turmeric, cinnamon, mint, and of course, saffron, more valuable than gold by weight."

Bourdain got kicked out of the place of worship. He didn't mind it much:

"Is this okay, this impromptu giving of oneself to the creative urge to stand and sing out to no one in particular? Maybe. But not okay, apparently, to film."

The importance of bread:

"In this part of the world, whatever your background, bread is a vital, essential, fundamental, and deeply respected staple." 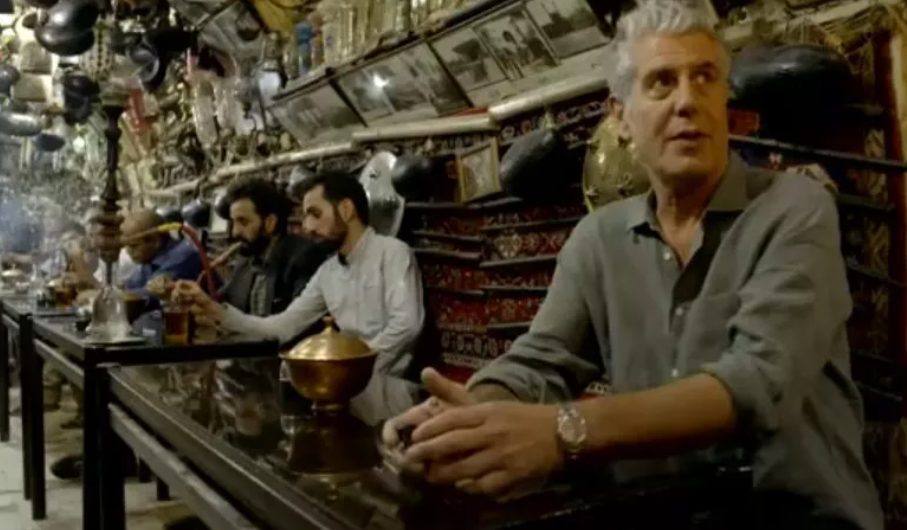 The part which is somewhat political yet deeply rooted in everyday life - the USA's effect on Iran:

"It is worth mentioning, whatever you think, wherever we are now, that Saddam [Hussein], supported by the U.S. government and with our full knowledge, used sarin and mustard gas on hundreds of thousands of Iranians. Less known in America, known and felt by everyone in Iran."

Bourdain expected something, yet Iran surprised him:

"So far, Iran does not look, does not feel the way I'd expected. Neither East nor West, but always somewhere in the middle."

"Rice mixed with yogurt and saffron, baked into a crispy dome: Don't think of rice as a side dish around here, it can be the main event."

"You put far more on the table than anyone can conceivably eat."

He knew how to get philosophical as well:

"You learn pretty quickly that in Iran, there is plenty of a grey area; an undefined territory. Where is the line? It seems to change with barely a moment's notice."

Of course, he saw some Los Angeles in Iran: 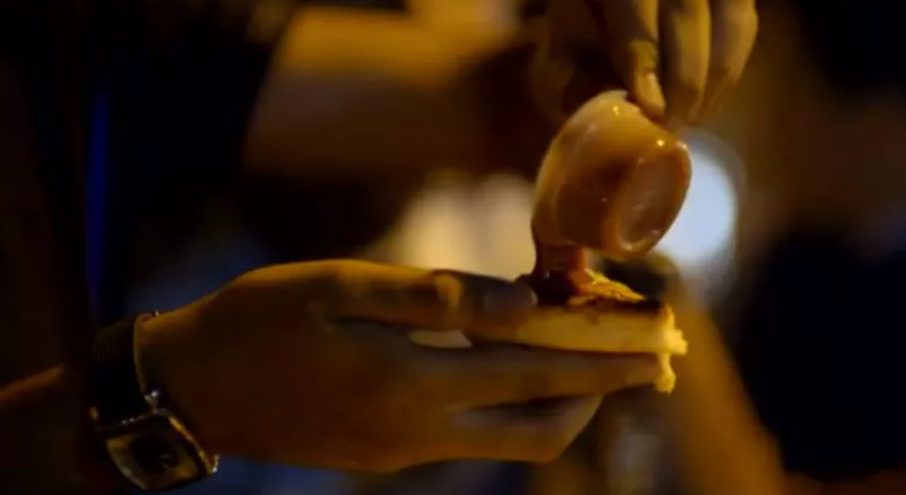 What an unexpected statement about takeout pizza in Iran:

"It comes with ketchup!"

The whole experience reminded him of his youth:

"I spent my youth pretty much doing this — hanging out in a parking lot."

Even Bourdain, who had a fantastic way with words, couldn't fully express his feelings about Iran. So he said:

"All I can tell you is, the Iran I've seen on T.V. and read about in the papers, it's a much bigger picture. Let's put it this way: It's complicated."

One of Bourdain's hosts gave everyone a good laugh by explaining who lives in Iran:

We hope you enjoyed these insightful, playful, and authentic one lines from Parts Unkown. The late Bourdain's way of presenting a place will continue to live on for all future generations who love food and travel, all in one.