The unspoken rules of the world say that there is a great possibility that your parents will enter your room just at the right moment to find you doing the forbidden things.

The same happened to a gamer whose mum walked in on him just when he was customizing the genitals of his character in Cyberpunk 2077.

New Arrivals Of The Week

CD Projekt Red's new RPG has been released last week, and social media went wild about it. New arrivals are always interesting for gamers around the world. But this time, there rarely was a comment filled with positive criticism.

Although the reviews have been mainly positive, the game's reception has been stung by its catastrophic bugs and glitches on consoles.

As a player, you get to explore a megalopolis obsessed with power, glamour, and body modification known as Night City.

And yes, keep this between us - this place is obsessed with sex! It even lets you shape the perfect penis or vagina for your character.

Could it get freakier than this?

An Unfortunate Set Of Events

Gaming streamer Deji recently got his hands on a copy of Cyberpunk 2077. Dying to try the new options as soon as possible, he got into setting up his character. And then he came to the part with genitals design and modification.

In a clip that has been shared to Reddit, he said:

"Why is this even a function in the game?"

" This is so weird. You can choose the penis size, you can literally choose the scarring on the penis."

And then - plot twist! 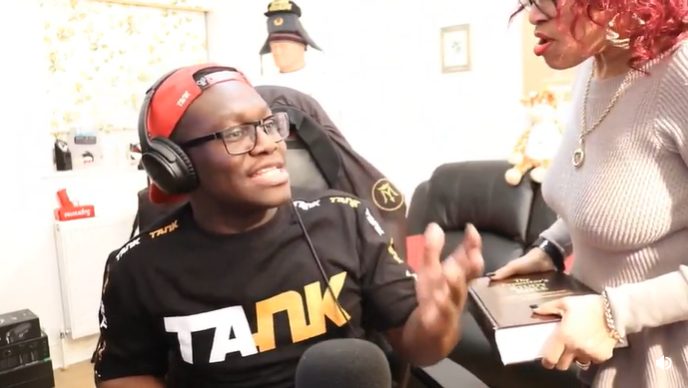 His mom raised her voice, asking him if he was talking about willies.

Meanwhile, the woman heard her son talking, entered his room, and saw everything that was running on the screen.

Everything that Deji said was:

"Mum, you couldn't have come at a worse time."

Yup, parents know to choose the right moment to intrude on our privacy.

However, he thought that this was hilarious. But that was not the case with his mom.

The woman was worried sick:

"What is this blue movie?"

"He's at it again, watching a blue movie… what is wrong with you? Have you not got a girlfriend?"

Poor Deji tried to defend himself, but his mother didn't let anything go.

And just when he thought that the torture and that embarrassing moment were over, she came back to the room and sprayed him with water.

"You need deliverance. Let me start praying for you."

She claimed while pulling out the Bible.

Quite a plot twist, indeed.

He tried to convince her that she got it all wrong and that he was not cheating on his girlfriend. But no - a mother always knows best, doesn't she?

How Much Nudity Is Too Much?

There is a lot of nudity throughout Cyberpunk 2077.

Although it gives a lot of opportunities to shape the genitals of your wildest dreams, it still is unsuitable for children's eyes.

And let's be honest: it has no bearing on the game's progress at all.

The game got loads of gossip and controversy about its constant and distracting bugs. Still, some of the glitches were witty.

For example, you could see your character's penis lurking through his clothes, attracting the attention of the whole world down there.

If you are interested in this game and want to find out more, here's something to watch: