While visiting Bronx Zoo, parents found themselves in panic upon seeing gorillas enjoying oral sex, as the kids were staring and wondering what are the monkeys up to.

This incident happened in one of the most crowded spots of the Zoo, in Congo Gorilla Forest. A few people even filmed the whole ordeal, and one of them commented:

"I was shocked and had no idea that was a 'natural' act. I was in the gorilla exhibit with my 4-year-old daughter and niece. My wife had to stay out of the exhibit with my sleeping son, so I wanted to capture many videos. Then this magic happened."

You can hear the parents screaming: "Oh no, don't look" and "Oh my god!" while someone calmly said, "I don't know how we feel about that."

When Gorillas Decide To Put On A Show

The act of gorillas performing oral sex is entirely natural. However, this is what happens when you put animals in a cage for human enjoyment.

Just like humans, gorillas enjoy sex. It was scientifically proven in 2016 by Dr. Cyril Grueter of the University of Western Australia.

And, just like humans, some are born to have sex with the opposite, while others stick to the same sex. They, however, do not care about monogamy, which only makes them more relatable for homo sapiens. 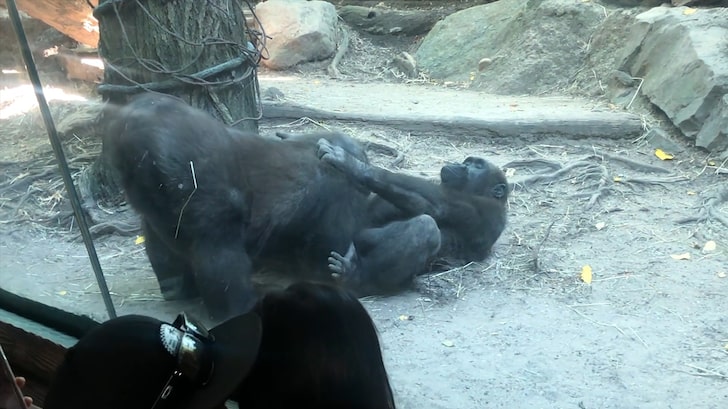 The researchers proved that some female gorillas had used sex as a weapon.

Additionally, some gorillas like to spice things up with the same gender sex, so it is safe to say these wild animals are pretty wild in more ways than one.

Raunchy behavior in gorillas is nothing new. It is not the first incident of its kind in a zoo, and before you start saying, "What about the kids?" a gentle reminder that gorillas do not understand the whole concept of human kids and what we present as shameful.

If you have to visit a zoo, perhaps skip the whole monkey section to avoid awkward conversations with your children!