Pamela Anderson filed for divorce in January 2022. The actress and Playmate married Dan Hayhurst in December 2020, but the fifth time was not a charm.

Pamela's divorce announcement comes days before the controversial serial Pam & Tommy is about to premiere. Considering that Anderson was against this show, it will be quite a turbulent period for the 54-year-old blonde bombshell.

Pam & Tommy reflects on the infamous sex tape made by Tommy Lee and Pamela Anderson in the 90s. It was stolen out of their mansion and went viral.

Lily James stars as Anderson, and she wants the world to know how much injustice Pamela suffered due to her private tape. Tommy Lee is played by Sebastian Stan. He got a blessing from the Mötley Crüe drummer.

The series will premiere on Hulu, with the first three episodes dropping on February 2, 2022.

Pamela Anderson and Tommy Lee married in a beach ceremony four days after they met in 1995. While the producers, and the cast claim they want to set the record straight about the infamous tape, Pamela is far from thrilled.

Maybe it has something to do with her sons from that brief and intense marriage, Brandon and Dylan. Regardless, Lily James contacted Pam, and she never heard back.

The Cinderella star claims she read all the books Pamela wrote and watched her interviews to make the story as realistic as possible.

For Stan, it is a story about the "media tornado," as he told Variety. Stan stated:

"I can't imagine what having a private home video stolen from you — how that wouldn't impact a newlywed couple."

Pamela and Tom were married for three years. They collaborated on his solo song Welcome To Planet Boom for her movie Barb Wire. Their chemistry was undeniable.

The juicy story was one of the biggest celebrity scandals of the decade, and Pam & Tommy is based on a 2014 Rolling Stone article by Amanda Chicago Lewis.

The series will have eight episodes, each with a cheeky title. There is also an unexpected story about a penis. Pam & Tommy writer Robert Siegel told Variety:

"There was gentle pushback because you've got to push back a little when a talking penis is presented to you."

Yes, the series will have a special appearance by a fake talking penis, which is supposed to belong to Tommy.

When you have some of the worst experiences from your youth televised, the best thing to do is lay low. But, Baywatch superstar did not get a fairytale, as sources claim that Dan was not the man he claimed to be.

Pamela Anderson In The Middle Of Another Media Storm 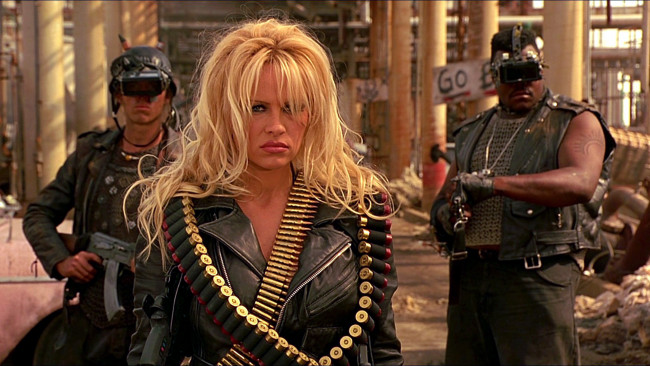 The Sun's source claims that Anderson has bad luck, always picking men "who bring very negative baggage into her home."

The same source said that Pamela is open for love once this relationship is over.

Pamela is spending time in Malibu with her sons. Probably, preparing for the storm once Pam & Tommy is out.

The actress and model had been married five times. The first time was to Tommy Lee. In 2006, she married Kid Rock. The marriage ended a year later.

She married Rick Salomon, but the marriage was annulled in 2008. However, the two got back together and remarried in 2014. The divorce came in 2015.

Before Dan, Pamela was briefly married to producer Jon Peters.

One day, Pam's life will certainly make an exciting movie. But, what do you think? Is it too soon to talk about the infamous tape, or will Pam & Tommy finally end this scandal, which was not caused by either Pamela or Tommy. Also, will Stan and Lily manage to act out the chemistry real Pamela and Tommy had?