Owls are majestic birds known for their big, hypnotic eyes and the fact that they can rotate their heads almost 360 degrees. However, this is not the only hidden trait they have.

Did you know what an owl is hiding under its feathers?

A few years ago, a viral photo had shown a horned owl with its feathers lifted. And what was revealed below were lengthy limbs almost half the size of its body. Well, owl be damned!

Needless to say, this image made quite an uproar on the internet. Many have wondered long their legs are. Underneath their thick feathers, owl legs are very long.

Seeing these photographs might change your views of the owls completely. So, if you have ever wondered what is hidden beneath an owl's feathers, no need to wonder anymore! We have plenty of pictures of the long owl's legs to sate your curiosity!

Are Owl's Legs Really That Long? 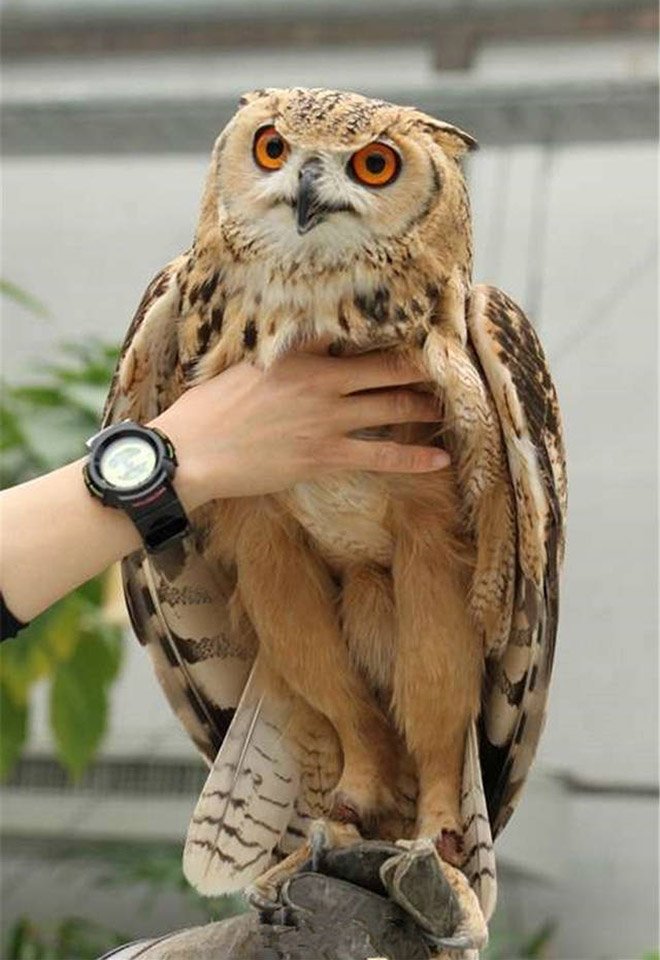 Owls are technically considered raptors. Yes, the raptors. The terrifying antagonists from Jurassic Park. Plenty of other birds of prey come under this impressive classification.

Then, perhaps it is of no surprise that owls have talons that shouldn't be messed with. Long legs need long claws, after all! An average owl has four talons total, three pointing to the front and one to the rear.

One of the front-facing talons of the owl can rotate to face back, making it easier for them to grab and carry prey. In addition to that, they possess legs capable of supporting their body weight when perched in trees and of carrying small rodents. Their legs need to be extended to be able to carry all that weight! 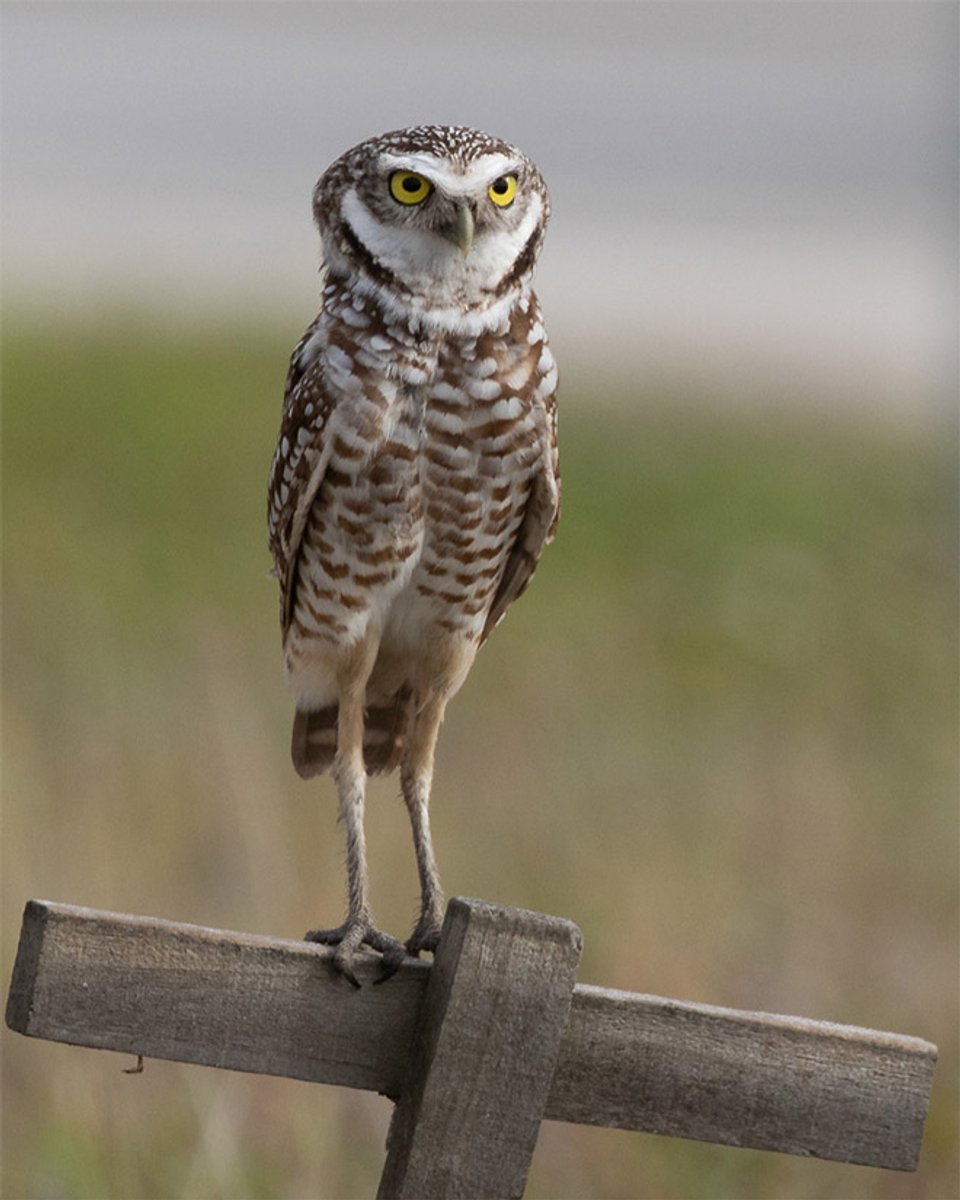 While the owls do not have a mouthful of razor-sharp teeth, they need their legs and talons as a primary line of defense against other predators. Evolution had worked wonders and made perfect sense when dealing with the owl legs! They are long for a reason.

A lot of owl's leg length is hidden in the plumage of their fluffy feathers. Only once exposed fully are you able to see the entire length of the owl legs. The long owl legs are certainly surprising to observers. In some cases, also very funny. Can you imagine that the size of an owl's legs can be almost as much as or even equal to their body length? 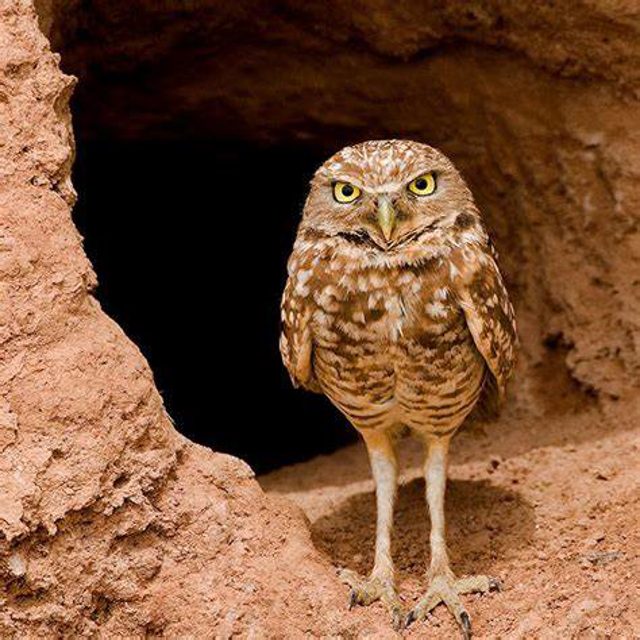 The length of an owl's leg is not the same for all species. It will vary depending on the species of owl and the size of that specific owl. For example, an owl's legs will be between a third of equal body length. Now, most of that is still hidden by the fluff of their feathers, making them look perfectly normal.

Certain species like the Great Horned Owl and the Barn Owl sport rather long owl legs. The difference between these two species is that the Great Horned Owl has most of its legs hidden under its feathers, while the Barn Owl has most of its legs on full display. There are Other species like the Elf Owl. It is the smallest owl species and has smaller legs to show off, but still quite long for its size!

Why Do Owls Have Such Long Legs? 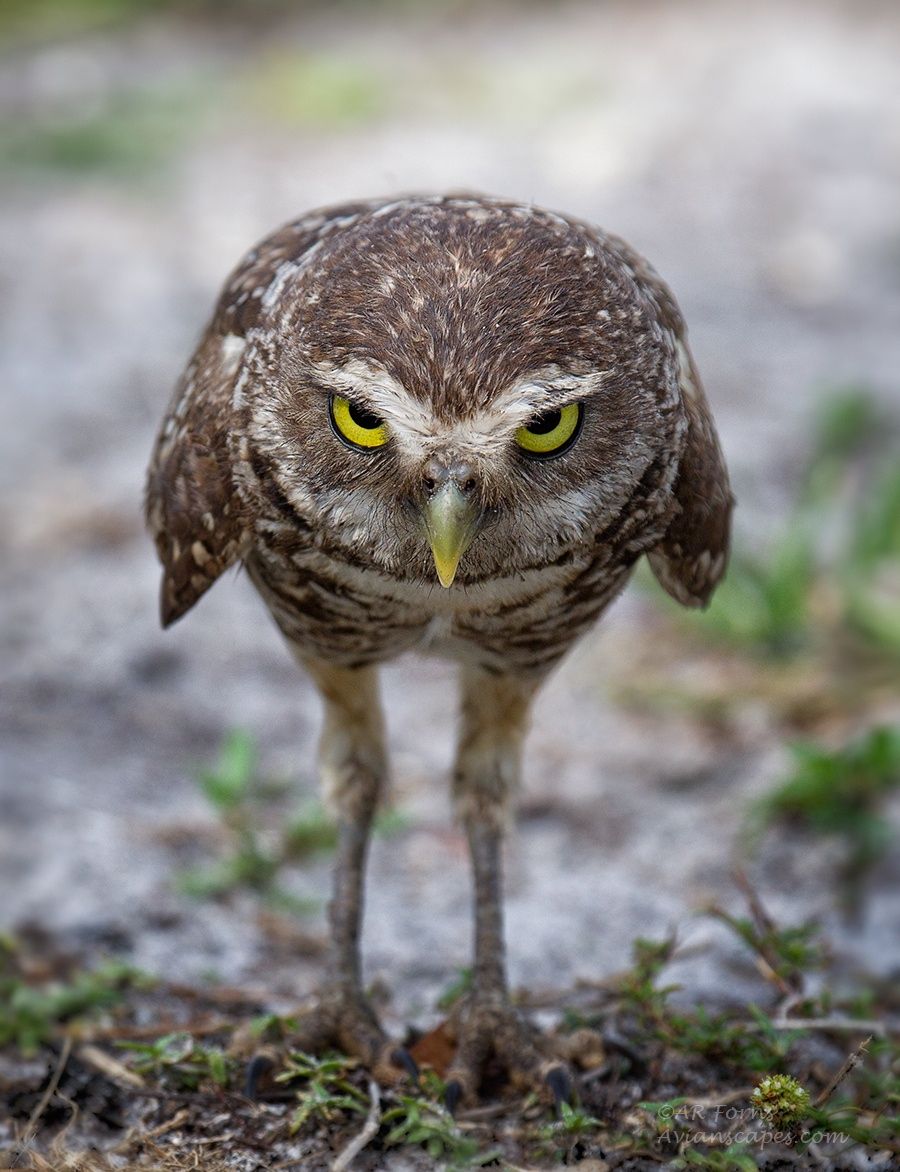 This is because owls hunt prey that often weighs a significant portion of their body weight. They need a lot of strength to grab and hold on to these critters. This strength comes from muscles in their legs. That is how their leggy stature came to be!

The length of owl legs will depend on the species. Like with other birds of prey, different species are also different in size. Take, as an example, a Great Horned Owl. They are, perhaps, some of the leggiest owls out there. Their long owl legs are almost equal to that of their body length.

Let's put that into proper measurements! A Great Horned Owl's body length is between 17 and 25 inches (43 to 64 centimeters). This puts their leg length roughly equal to or just slightly shorter than that. Can you imagine that? 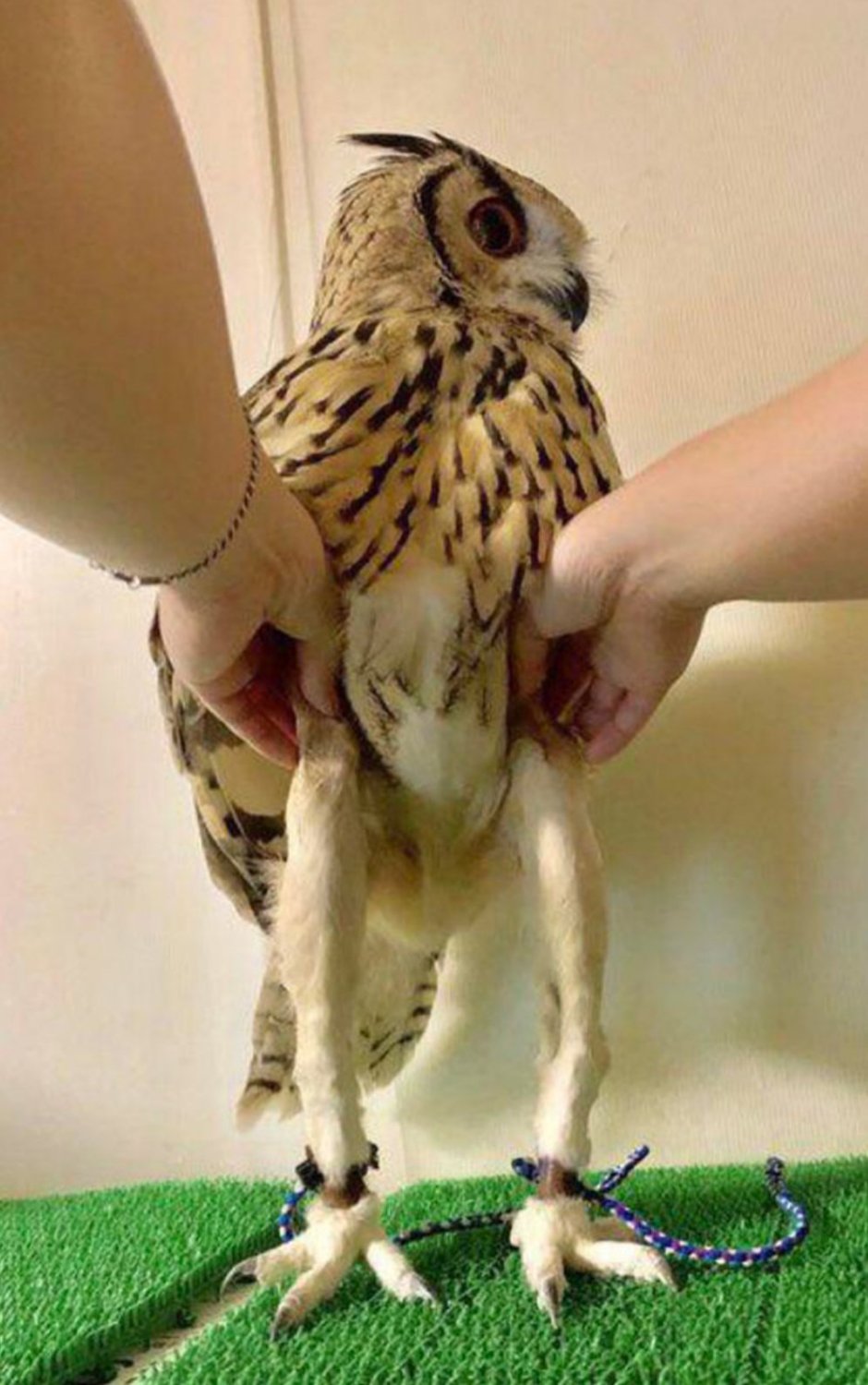 A lot of the owl's legs are covered by their feathery suit. To see the length of the owl legs, you will have to hold up a good deal of its plumage to expose them. You might be surprised at how many limbs they are hiding.

An owl's legs are longer than most people realize. Take a look at this picture exposing this owl's lean legs. Also, keep in mind that owl legs are anything but scrawny. The long owl legs serve the purpose of housing the powerful muscles that fuel the firm grip they use to hunt. 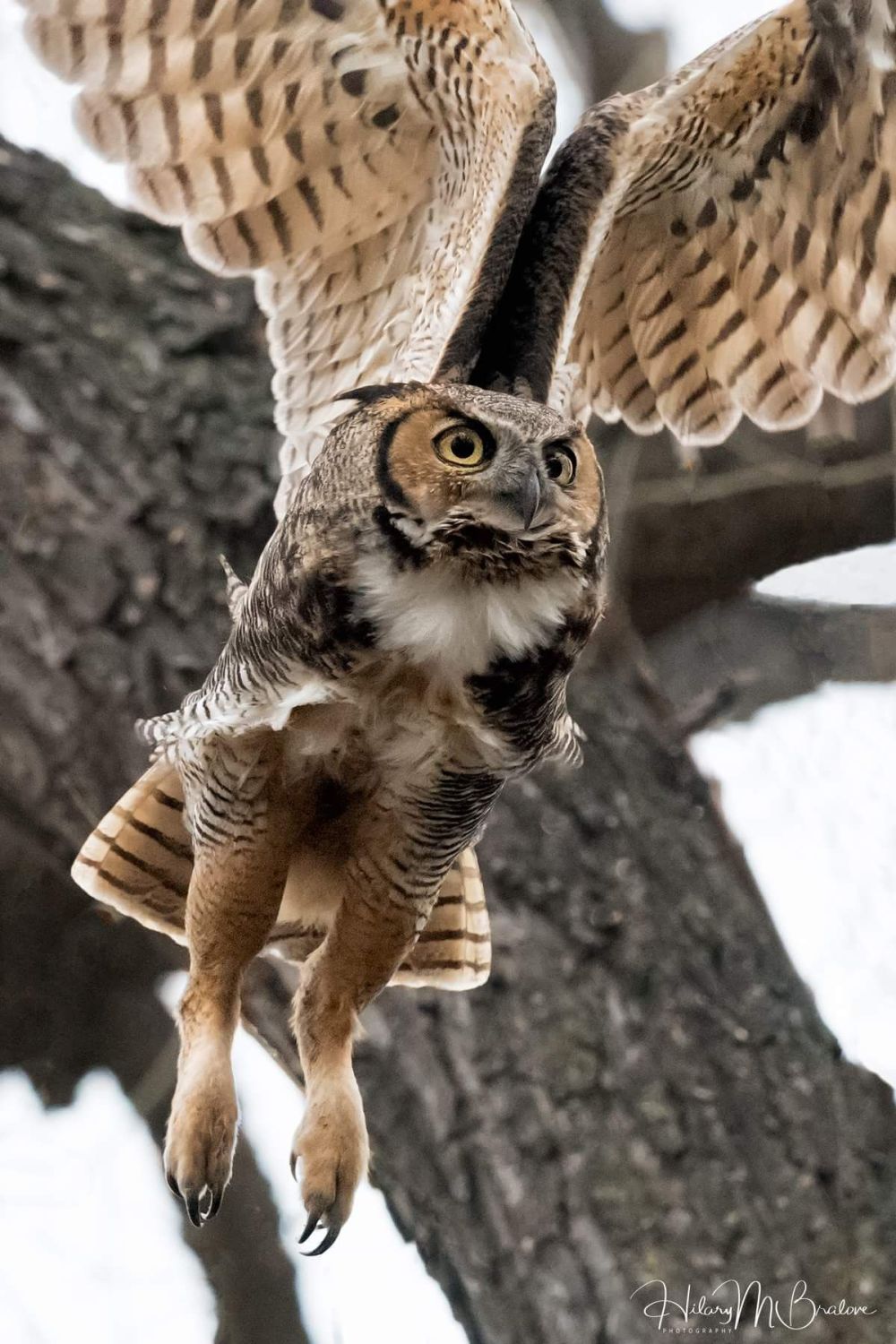 If you look under the surface, a distinguishing feature of an owl's legs is its long shin and tarsal bone. This anatomy is what gives their legs that lengthy appearance.

Even though the owls are mostly known to be experienced flyers, it is no wonder that they are also fast on the ground. How could they not be with those long legs! Some species can reach up to 40 miles per hour (65 kilometers per hour). This is thanks to the strong muscles in their legs, which also work well for running.

While their form isn't what anyone would call graceful, it would still get the job done.

Among the most known species of owls, the Barn Owl is another with surprisingly long legs. Similar to the Great Horned Owl, their legs are around the same length as their body. To put this into numbers - their body measures between 14 and 20 inches (35 to 51 centimeters), and their legs typically measure around that mark as well. 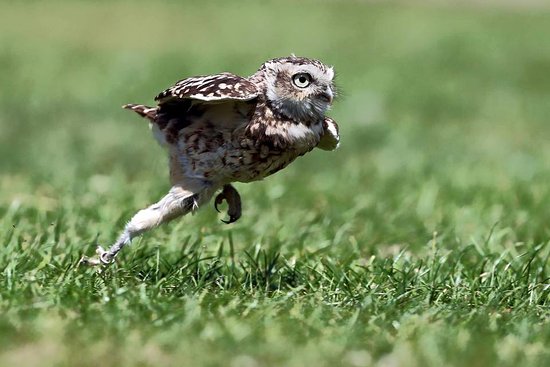 While Barn Owls are not as feathery as the Great Horned Owl, their legs can be exposed easier. There is not so much fluff to move out of the way to do so. Still, their full leg length may also surprise you.

To summarize, the reason the owl legs are so long is that they need that firm grip. They can't catch prey with weak talons. Their legs are similar to that of a flamingo or a stork, and their knees bend backward as opposed to the human knees. Owls also do not have opposable thumbs, but they can turn one of their paws to face the back. This is very helpful during hunting!

How About Baby Owl Legs? 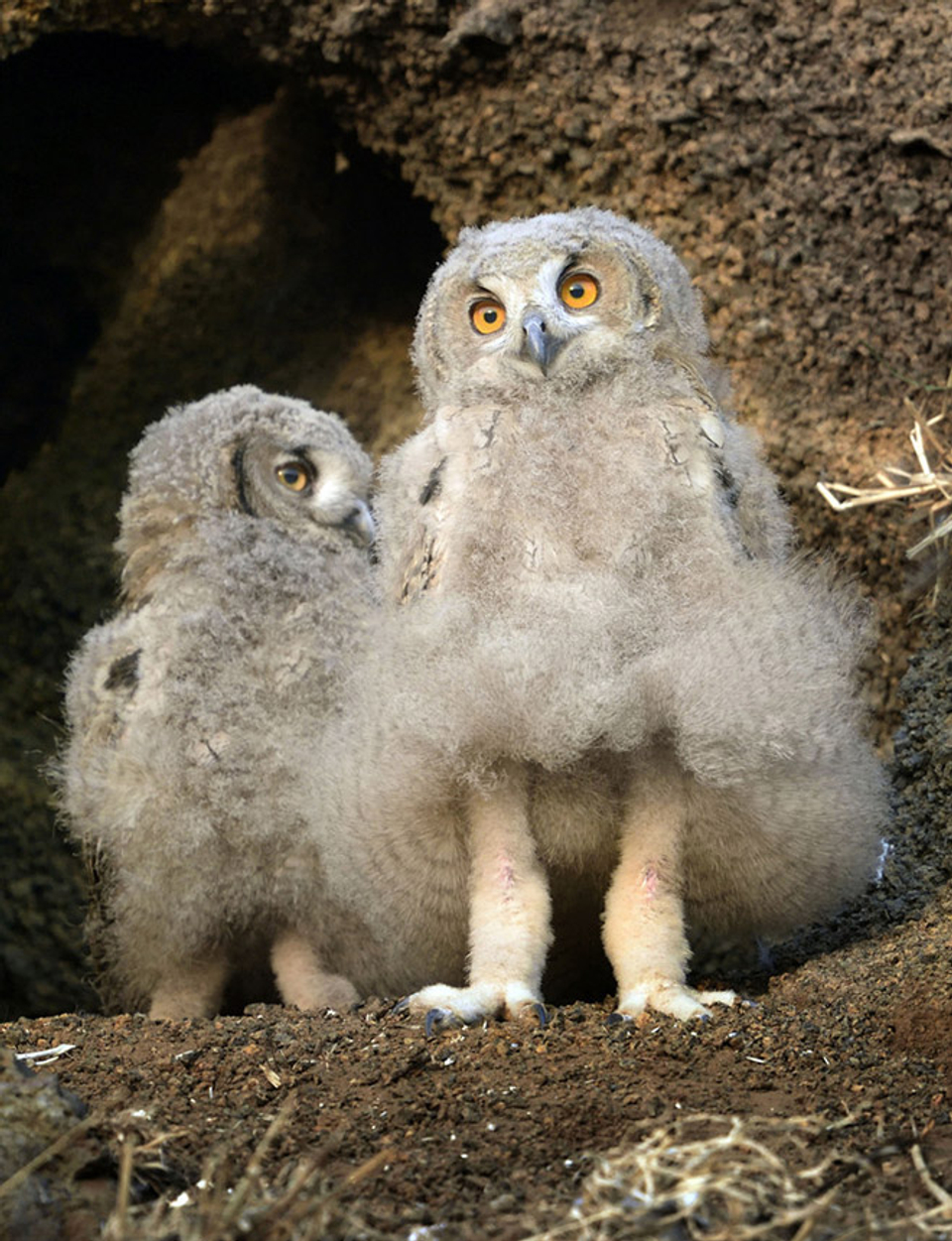 A baby owl is called an owlet. This term is also used as the general name for several diminutive African and Southeast Asian owl species – a pygmy owl and two little owls of southern Asia.

Owlets are especially adorable when they hatch. They start their life as an egg. Most owl eggs are white and laid in late January or February. The most common - Barn owl - lays eggs on a nest made of owl pellets.

They can lay one egg a day, but their eggs start to incubate immediately. Owls hatch at different times, spaced out by two days. This is, though, to give the first chick the best chance of survival. Perhaps due to food availability and ensuring that one chick is big as quickly as possible to stop predation.

After they have been laid, the eggs take between 3 to 5 weeks to hatch, depending on the owl species. Once hatched, the owlets have white downy feathers. They are replaced with darker ones after only a few days.

As fluffy as they are when they are born, baby owls still have the same long legs as their parents do. Baby owl legs and skin are pink. Their size will vary depending on the species.

As they grow, the owlets become fledglings. At this point, they will have their primary adult feathers with a few wispy down feathers on the top of their heads. When they turn into juveniles, all the wispy feathers are gone.

Owl babies are still tiny compared to the size they can grow. For example, a grown snowy owl can be 2.5 feet tall but starts life as a helpless owlet only 2.5 inches long.