Oreo has built an asteroid-proof doomsday vault in Norway and filled it with cookies and powdered milk.

The threat of asteroids striking the Earth and causing a global catastrophe has inspired many people to build bunkers to not only protect survivors but also ensure the safety of plants and animals. For instance, the Svalbard Global Seed Vault in Norway.

The secure facility, built into the side of a mountain, holds more than one million seed samples. The hope is that, in the event of the apocalypse, we can replant crops and trees and rebuild the Earth.

With that in mind, the makers of Oreo have also ensured the popular snack will live past any possible apocalypse.

Just down the road from the seed vault, Oreo has built a Global Oreo Vault that houses the recipe to the famous cookies and a healthy stock for future generations. 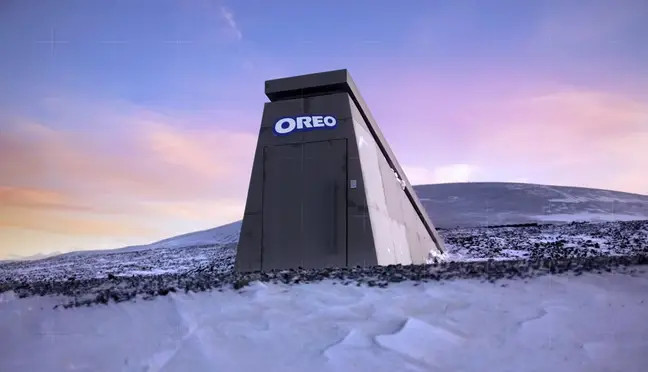 According to the cookie company, the Global Oreo Vault I 'really real,' though it is smaller than its seed counterpart.

The cookie brand also says this Oreo-focused facility holds just 'the Oreo recipe and a large stockpile of cookies.'

Oreo also pointed out on a YouTube video that they created the vault specifically in regards to Asteroid 2018VP1.

I wonder who will save the oreos? https://t.co/6oC5ctLwfU

According to NASA, Asteroid 2018VP1 was to hit Earth's atmosphere on November 12, last year. Luckily for us, it didn't hit us, and we narrowly escaped the doomsday.

"Each cookie pack is wrapped in protective Mylar which can keep our cookies safe from temperatures of -80°F to 300°F."

"[The cookie pack] is also impervious to chemical reactions, moisture, and air, keeping the cookies fresh and protected for years to come."

Inside the Global OREO Vault, cookies have been sorted into Emergency OREO Ration Packs, protected by durable casing and accompanied by powdered milk. #OREOVault pic.twitter.com/QGC1nZBWi0

In another post, Oreo explained that the vault also contains vials of powdered milk.

It also explained the powdered milk only needs adding snow before it's ready to have Oreos dunked in. It seems Oreo has it all figured out!

Sure, in theory you could go to the coordinates in Svalbard, Norway, hack the passcode, bypass security and sneak by Sven (our human Head of Security). But don’t ha ha https://t.co/O9qC3Bp67C