Have you ever thought of how the heart shape, despite not looking like a real heart, came to represent this important organ and the strong feeling of love associated with it?

How did two equal curves meeting at the bottom and having cusps at the top turn out to represent the heart?

It might surprise you to learn that the heart symbol dates back to the 6 to 5th century BC. Since then, we have known that it represents the heart, although there is no obvious similarity.

However the symbol started, it's a pretty cute sign and also very universally recognized as a symbol of love. Today, people also use a less than sign and a three to represent it.

Incredibly, nature also seems to love this symbol, as some miners recently discovered. 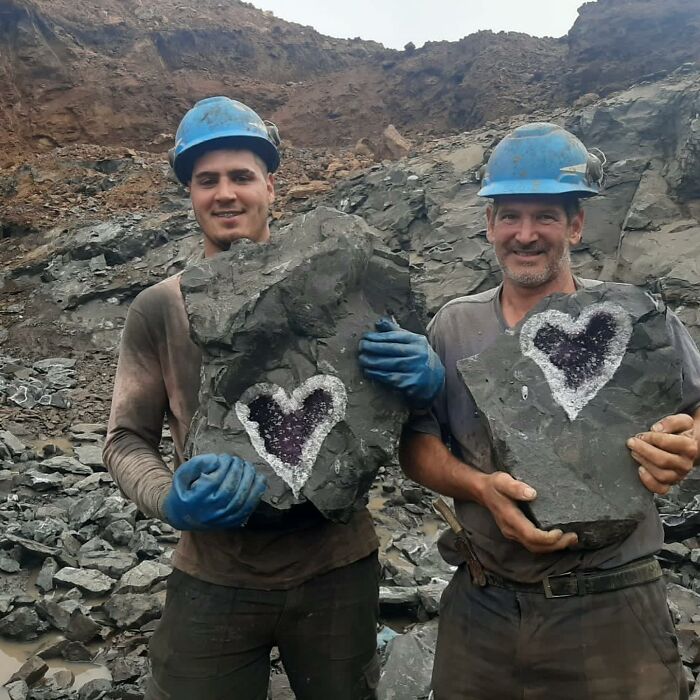 While miners were busy working in the new Santa Rosa mine in Uruguay, close to the border with Brazil, they stumbled upon a strange discovery. Marcos Lorenzelli of Uruguay Minerals explained the occurrence:

"It was a normal day at our mine located in the Catalan area in Artigas. The workers were just now allowed in the area to find more geodes in the new mine."

"However, the basalt was very hard, so one of them joked, 'now we have to find something amazing due to the hard work we have to do here.'"

The Miners Found An Amethyst Geode Shaped Like A Heart 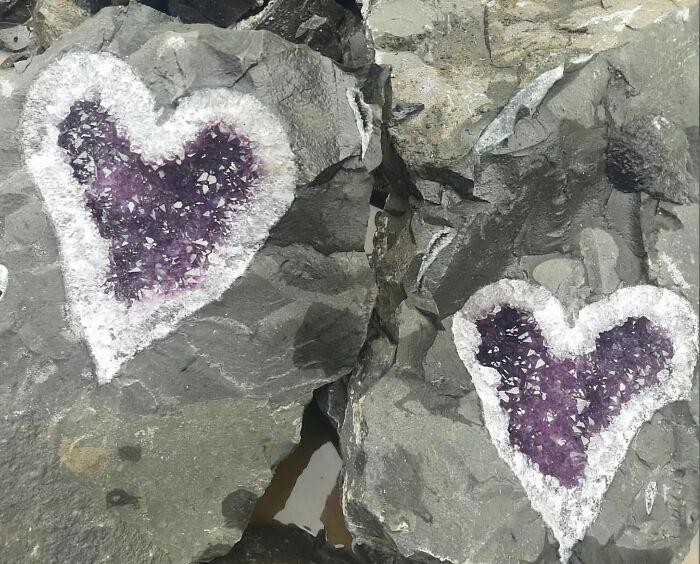 The miners, working with Uruguay Minerals, made the discovery. 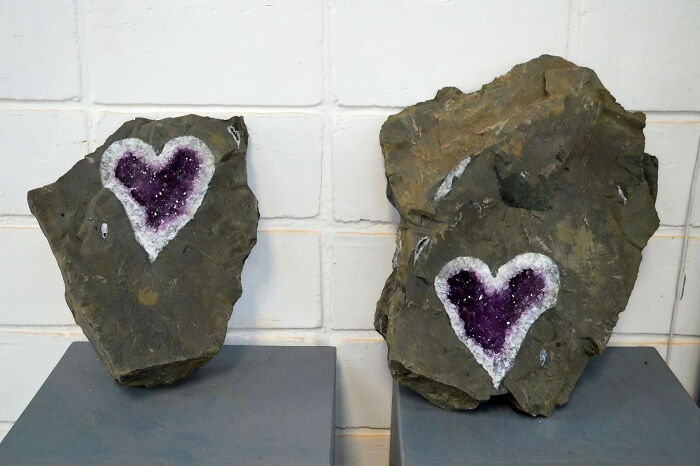 The miners discovered that the basalt they were working on was harder than is usually the case. Consequently, they needed to work a little harder to crack the rock open.

They did not back away but put in the effort, and clearly, it paid off. According to Lorenzelli, the treasure was found after a few hours:

"After two or three hours, they moved a basalt rock and with the excavator machine, opened a heart-shaped amethyst geode—what a treasure!"

This is simply incredible. Mother Nature has managed to come up with a heart-shaped amethyst geode, and this company was extra lucky to discover it. 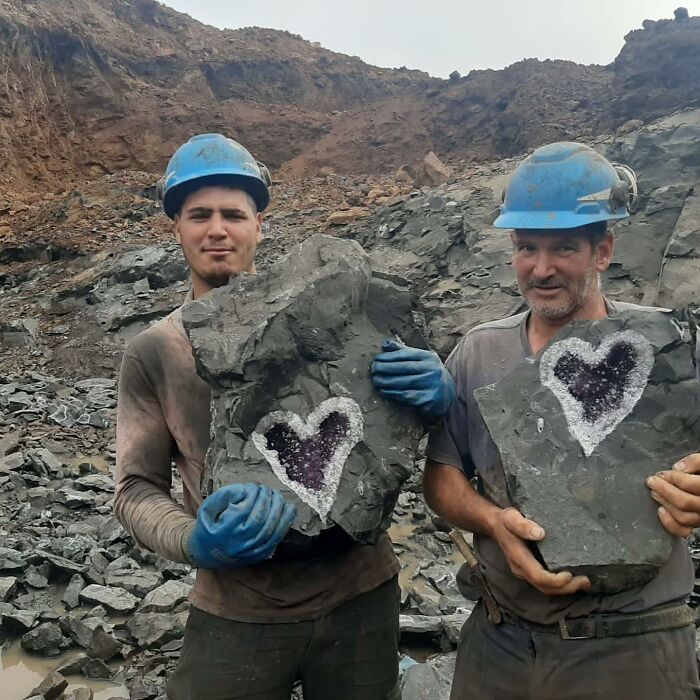 Granted, geodes take lots of shapes. They also come in all sizes.

However, this particular geode was more unique than the rest. In fact, this is the first time the company has made such a discovery:

"This is very unique and it's the first time we found something like this."

Soon after the discovery, the company shared its incredible finding with its fans through its website. They also posted the images on social media, and many people were genuinely intrigued by the geode.

According to many people, the geode is so adorable. Others went on to suggest that the finding may be a sign of love from the planet and that we should also respond in kind.

Obviously, this was in relation to the climate change problems humans have caused over the recent past. 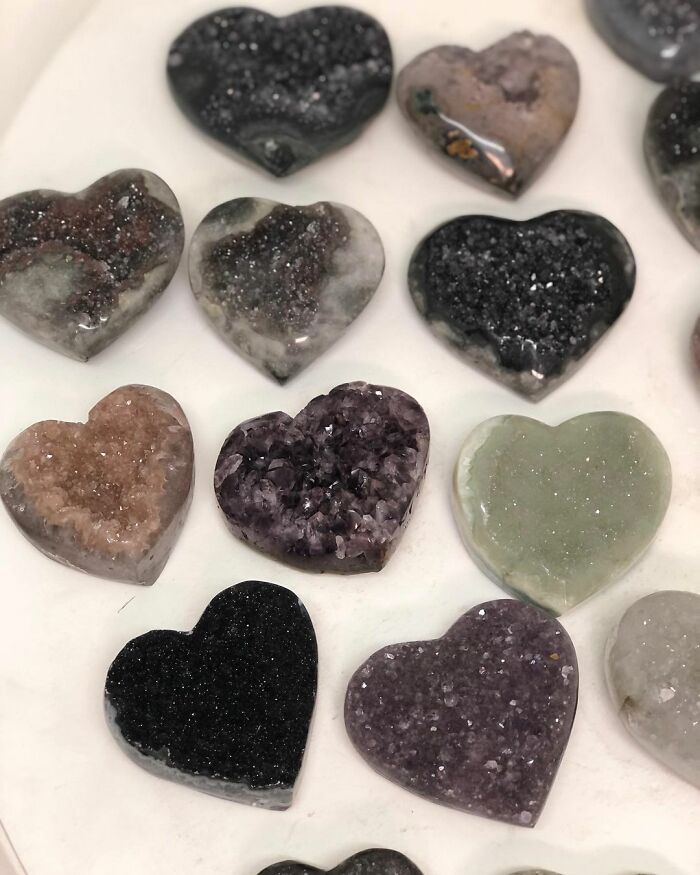 They make other shapes too, but they clearly seem to love making hearts using the geodes they dig up.

It's The First Time They Unearthed A Heart-Shaped Geode 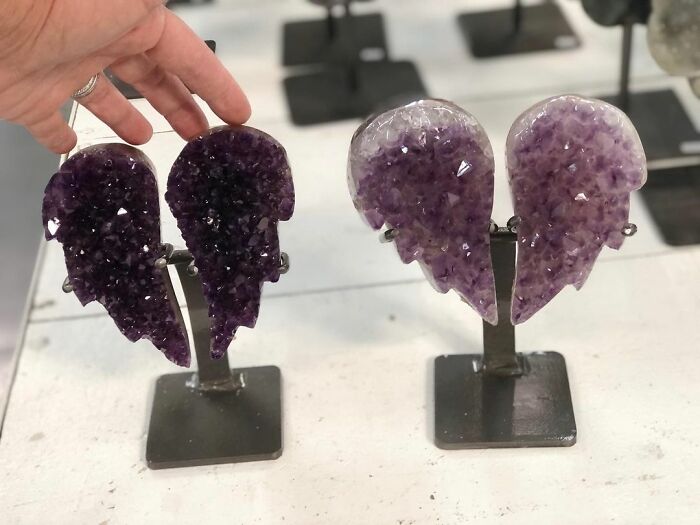 Despite finding lots of geodes over the years, the company has never found a heart-shaped geode before.

Naturally, some people joked about the photo the company posted online by suggesting that the two miners holding the minerals were cleverly announcing their engagement.

In fact, images of the two miners have now gone viral on Reddit, with one of the pictures getting more than 100k upvotes and more than 1k comments.

However, while this might be a unique find for Uruguay Minerals, it is not the first time the company has had a heart-shaped geode. The company regularly transforms geodes into hearts, angels, and even Christmas trees, among other shapes.

The Geode Too Precious And Unique, Company Won't Process It 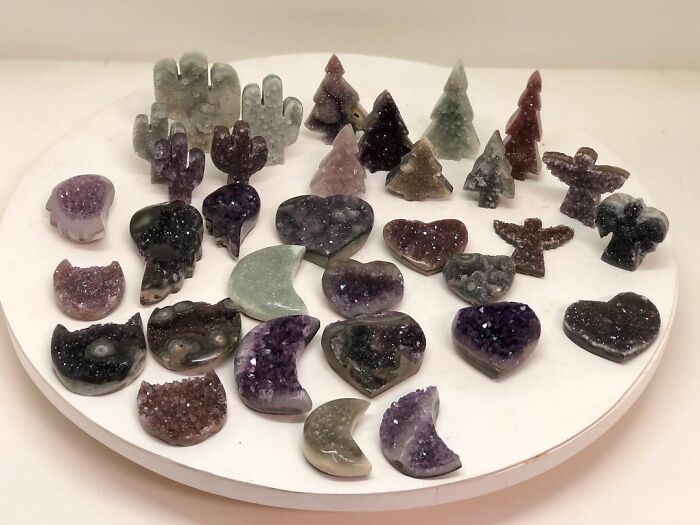 Lorenzelli says that they have decided not to do anything with the discovery since it's too precious. The geode will stay as it is.

If you want to see more of the geodes, they have unearthed over the years, and you can check out their website, their Facebook page, or even their YouTube channel.

What do you think about this? Do you believe that the universe is trying to tell us something with this adorable discovery?

Here are some comments people have made about the heart-shaped discovery.

It always surprises us when Mother Nature seems to understand the things we humans hold dear, as this heart-shaped amethyst geode proves.

Uruguay Minerals is probably right: it would not be a good idea to mess up with this perfect natural creation by processing and reshaping the geode.