Women are subjected to unrealistic beauty standards, depending on their religion, race or part of the world where they come from.

A London-based photographer, Ben Hopper, decided to challenge one of those, namely body hair.

In one of his projects, Natural Beauty, Hopper photographs women with unshaven hair to prove they're even more stunning and beautiful with body hair. 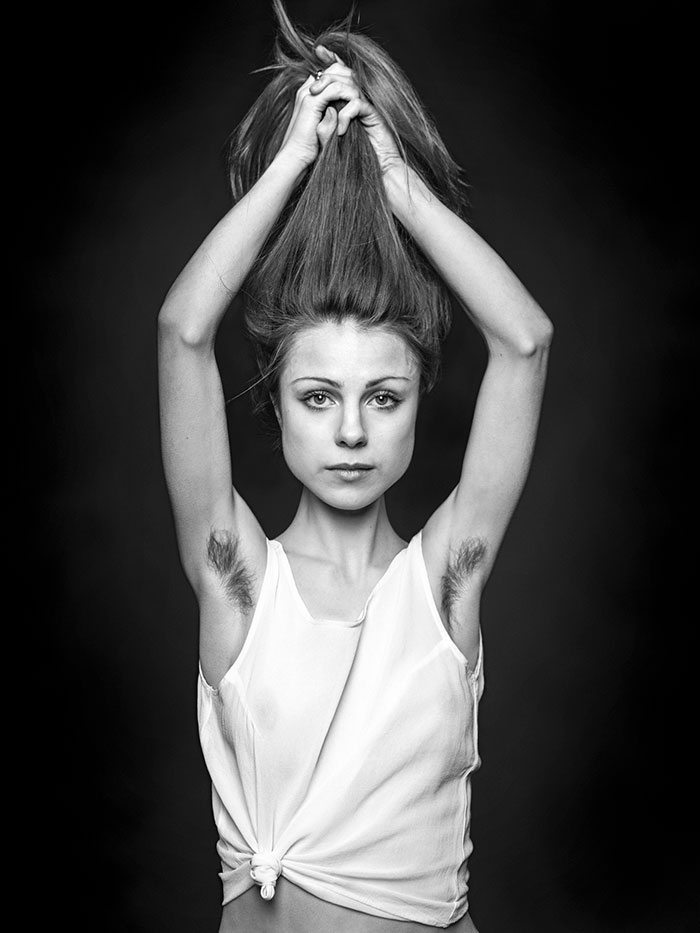 Speaking of his inspiration for the Natural Beauty project, Hopper said:

"I was interested in exploring hairy armpits of females and how it is such a taboo."

"I was also interested to explore the concept of how we perceive beauty in popular culture."

"[When] you look at fashion and film industries, you have a very, very specific kind of beauty standards for women."

"So, I wanted to find models who look like fashion models and film actresses, and just photograph them with body hair all out to have this kind of contrast between the popular culture fashionable beauty and the non-fashionable beauty."

Hopper, however, doesn't want people to think he photographs models who could be considered 'beautiful' in a specific kind of way.

Instead, he wants people to be more accepting and comfortable in their own skin.

"This contrast is to make people reconsider, to f**k with the system. And then people are open for debate and more willing to accept."

Check his most popular women portraits and the stories behind the models' stunning beauty. 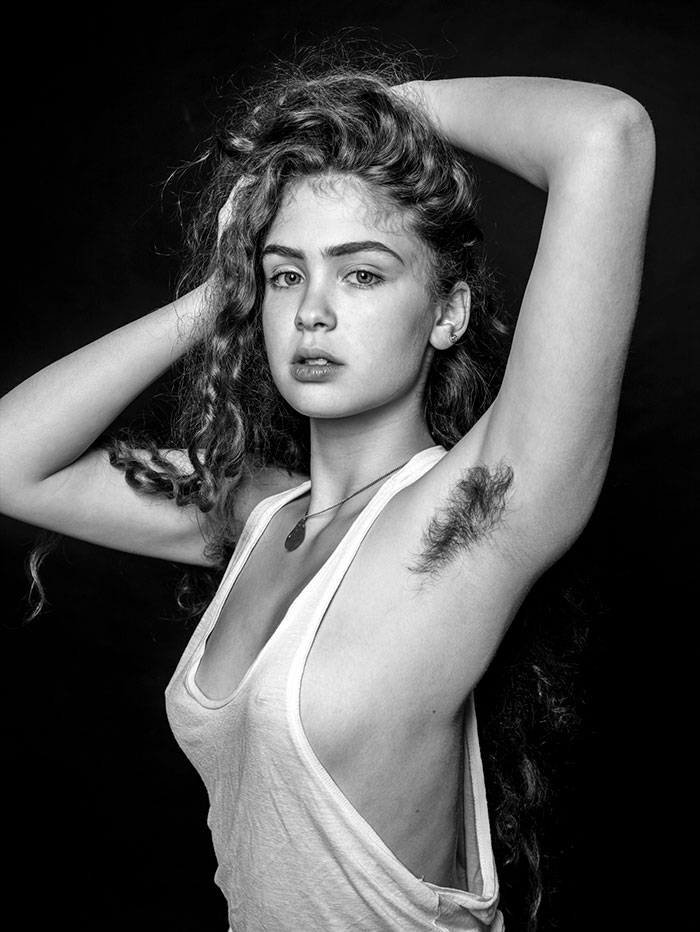 "I am mixed race and have quite fair sensitive skin and thick dark hair. This made shaving a very difficult and often painful process."

"Stubble would always grow back within 24 hours, and trying to shave the stubble would end in bleeding and rashes. My underarms were never 'pretty' or 'feminine.' I hated it and was made miserable by it."

"When I was about 17, I decided to try something radical."

"I decided to stop putting myself through pain, to stop being angry with my body for not being the way I wanted it. I stopped shaving.

"The experience completely changed my feelings towards my armpits, and my overall confidence increased massively."

"I think everyone should try going without any non-essential grooming at some point in their life.

"It's really interesting to see what your body naturally does. You may find it freeing and empowering. You may even find that you like the way it looks, as I did. 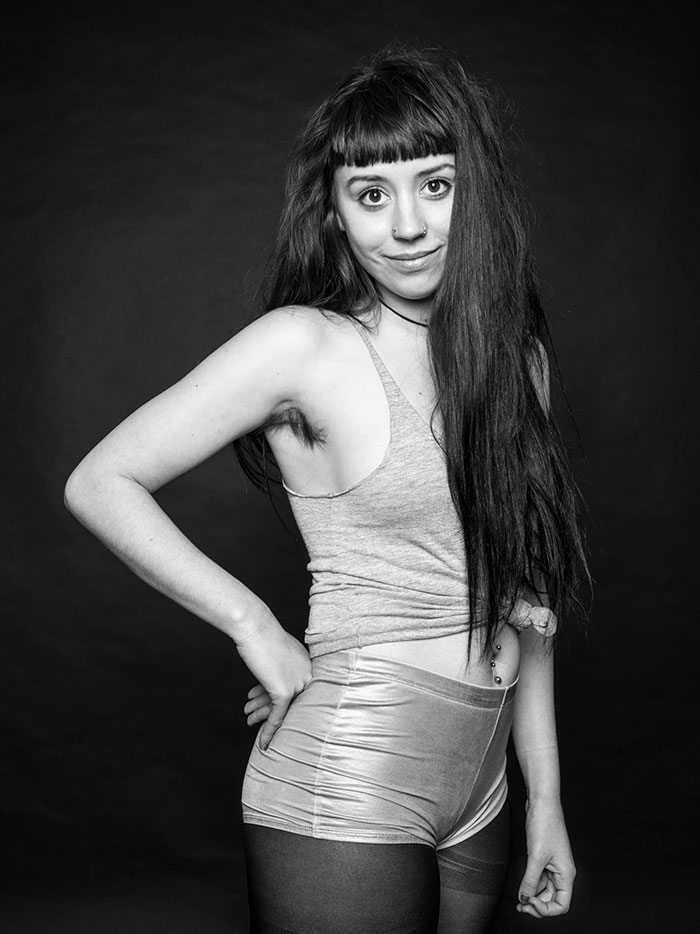 "I stopped shaving after reading Judith Butler and realizing that I had no idea what my 'natural' body looked like, as I was convinced to perform my gender and shave by 15."

"I then continued not to because I felt the need to overcome the embarrassment I felt for not conforming."

"Not shaving shouldn't be a statement, but it is.

"Eventually, it became a really liberating experience, and showers are so quick and easy now. I will never go back!" 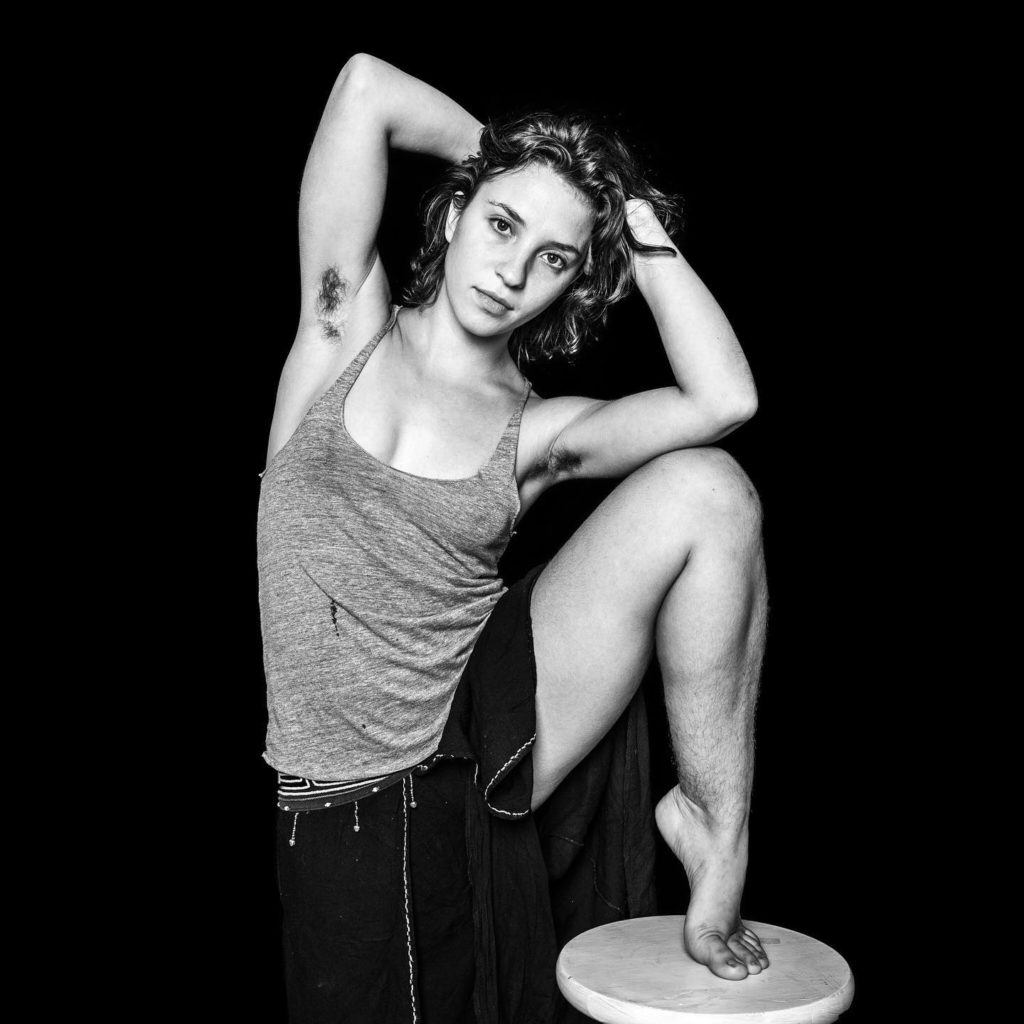 "I stopped shaving my body hair as I realized that it is a choice, not a given. That it was unfair to spend so much extra time, sometimes money (if getting regular waxes), and energy to fulfill this conventional expectation to be hair-free.

"This expectation seemed to be based entirely on my assigned biological gender, which was purely down to chance. Not choice." 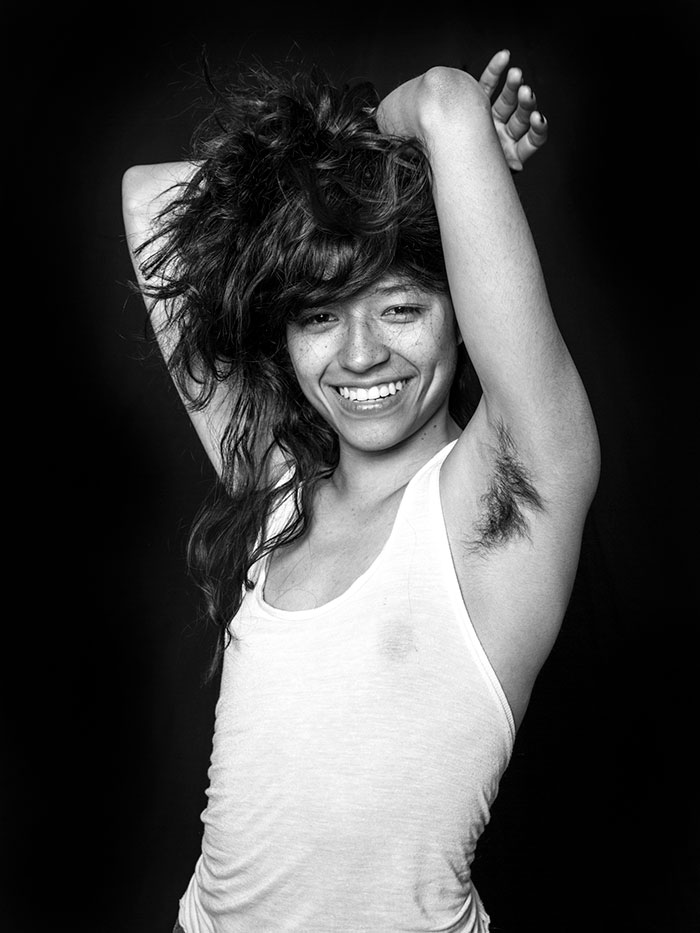 "I've always been very hairy, as a child, teenager and now woman."

"I always felt very insecure about this as a teenager, thanks to the stigma perpetuated by the society that it was not feminine to display the hair on your arms, legs and armpits."

"I used to spend many hours shaving and also spent a lot of money on razors, creams and sticking plasters only to end up with skin irritations and unnecessary infectious spots, that take ages to heal until the next time I had to start the cycle all over again.

"One day, my physical and mental irritation got so intense that I realized that shaving was not healthy for my skin."

"I did feel slightly unsure at first. However, it felt really good afterward as I knew that not shaving was making my skin healthier.

"What I was doing was also in some way liberating me from the stigmas and layers of society that I'd been put upon as a child." 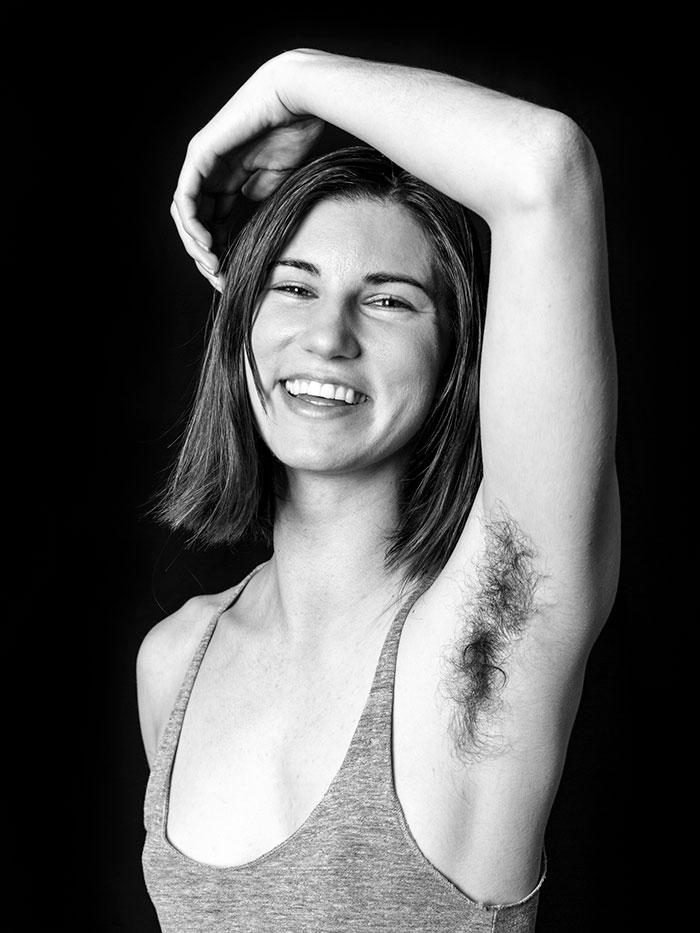 "There are people who are exceptionally rude and who speak from fear. People who say it's dirty and that I must be a man."

"The more important questions to ponder are rather why and how do we live in a culture/society that has deemed it acceptable for certain people to have body hair, and unacceptable for others?"

"Isn't it absurd that it is socially acceptable for humans to have lots of hair on their head, but not on other parts of their same body?"

"Isn't it ridiculous and ironic that what grows naturally on its own is seen as unnatural? How did we get here?" 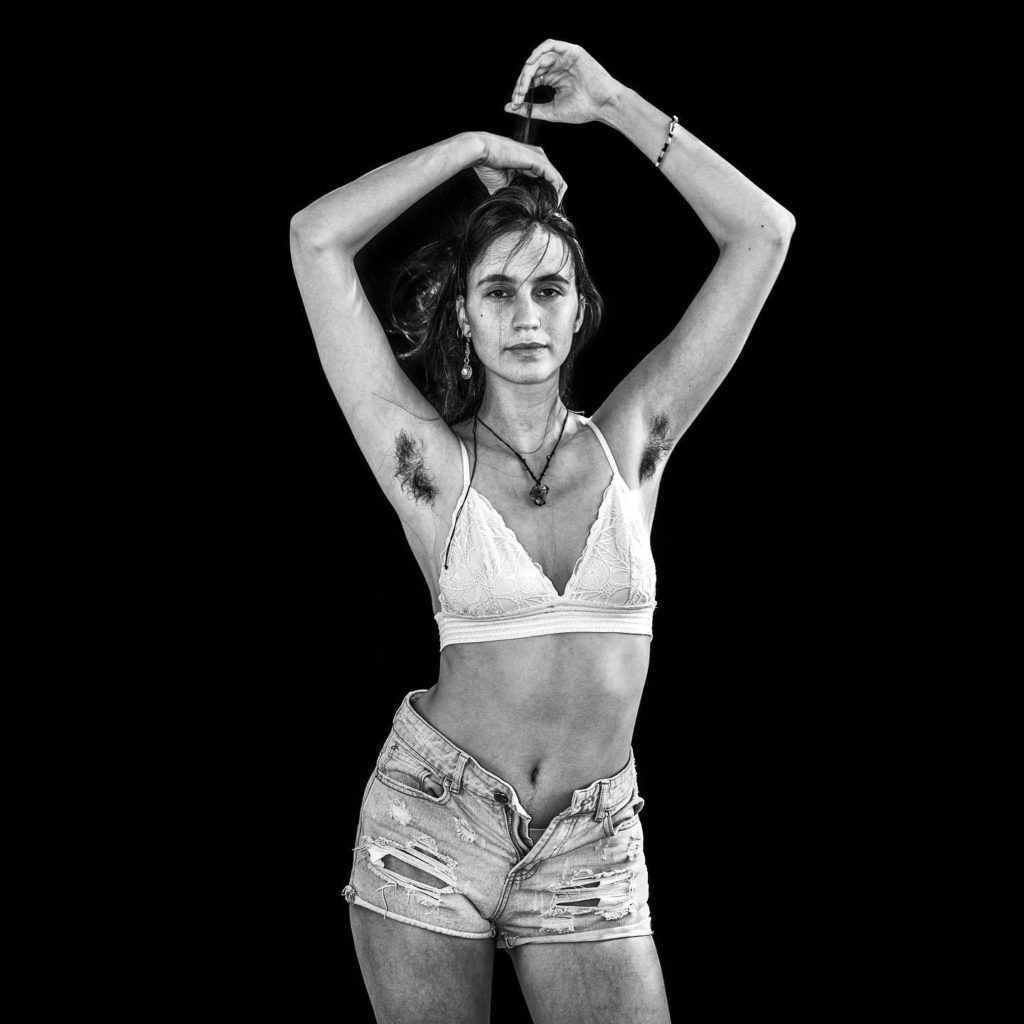 "I began to delve deeper into female history and feminism, discovering a much deeper layer of slogans and billboards selling advertisers and giant companies rolling in large sums every year under the "beauty ideal."

"I discovered that there are other women who choose to grow their hair naturally, and it does not detract from being beautiful and sensual." 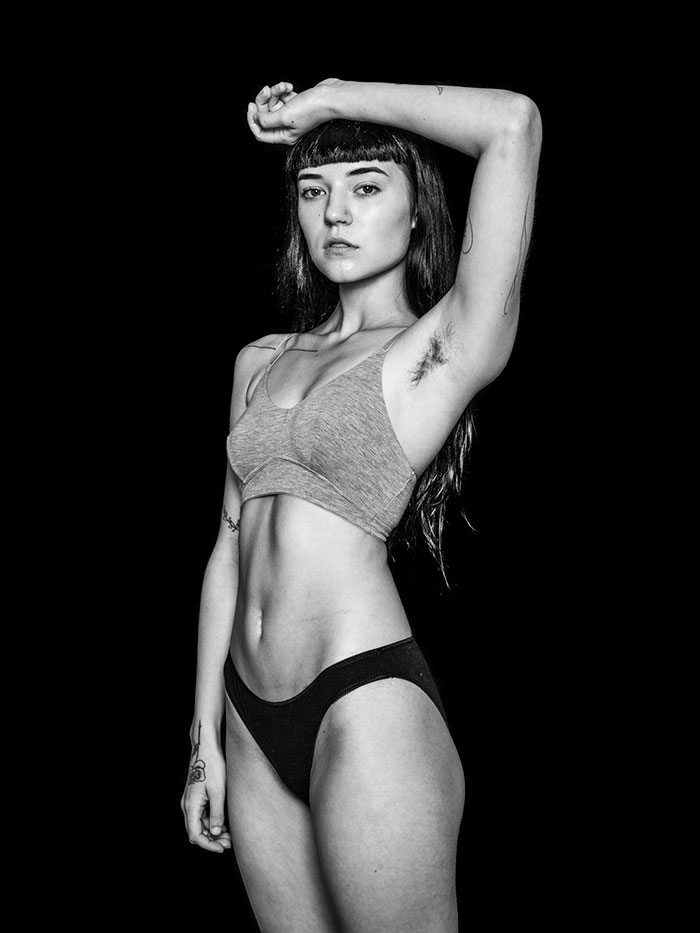 "The first time I removed body hair, I was around 11 years old."

"I stole my older sister's razor and attempted to remove all of the hair from my body, not that I had much at the time."

"Also, I assumed you needed to use a lot of pressure with the blade against my skin and ended up removing strips of flesh from my legs, which caused profuse bleeding."

"I still remember going to school wrapped in bandages and claiming that I had fallen down a tree."

"Looking back now, I think of how horrified my mother must've been that I had already been to remove the early signs of puberty."

"Without recognizing it back then, I had already equated body hair with something monstrous and unnatural. Something I had to eradicate."

"But as I grew older, I reflected on this instance a lot and the meaning behind it, and eventually just stopped removing my hair altogether."