It seems like Nancy Pelosi's new year is going to kick off with the most disturbing acts of vandalism.

House Speaker Nancy Pelosi's home was left vandalized overnight with a pig's head, fake blood, and graffiti. This was clearly an act of defiance, following the US government's failure to pass a bill allowing a $2k COVID-19 relief payment.

American citizens only received $600 in grants to cope with unemployment and other difficulties related to the coronavirus outbreak.

On Wednesday, Senate Republican leader Mitch McConnell rejected a bill to raise these $600 payments, and he claimed that there was "no realistic path" to make such a thing happen.

The anonymous citizen took their anger out on Pelosi's San Francisco home and did some damage to the property. However, the damage was mostly in the garage door and driveway.

Me seeing the stimulus check in my account this morning vs me paying my rent with it an hour later pic.twitter.com/jXluOJIqwh

The pictures shared on the Twitter show "Cancel Rent!" spray-painted in black with '$2K' crossed out and "We Want Everything" written in very big letters on the door.

Not only that, but there was also a pig's head lying on the floor in a pool of fake blood.

Law enforcement sources said to TMZ that cops in San Francisco responded to a vandalism call at Nancy Pelosi's house around 3:00 AM, while she was not there. However, it was not clear if the police had any potential suspects.

Since then, there have been black garbage bags covering the damaged garage. And of course, the pig's head and fake blood are not there anymore.

Appalling.@FogCityMidge is right. News is ignoring.

I took this picture just 5 minutes ago. They are literally covering it up.

Dems like Pelosi will learn sooner or later: you cannot appease the violent left. https://t.co/Ohih0zVTpO pic.twitter.com/0JOxzj9KA4

One neighbor told KPIX that the vandalism doesn't help anything:

"I don't think that this is a useful way to go about it and it's a terrible start to this new year when we are hoping for less anger and hatred than we've had to deal with for the last year,"

The US Government Had Refused to Increase Payments

After Trump signed the COVID-19 relief package, many Americans criticized both the Democrats and the Republicans.

Citizens have accused the American officials of not addressing the levels of financial insecurity they face in the midst of the pandemic, with a lot of Americans calling on the US government to cancel rent.

$600 stimulus check hitting people on the first of the month: pic.twitter.com/kkick6uKA2

According to CNN, McConnell said that the Democrat-led efforts deviated away from Trump's original request.

In fact, when addressing the Senate floor, McConnell argued: "The Senate is not going to be bullied into rushing out more borrowed money into the hands of Democrats' rich friends who don't need the help."

McConnell referred to the $900 billion stimulus package, which Congress recently passed, including direct payments of $600. 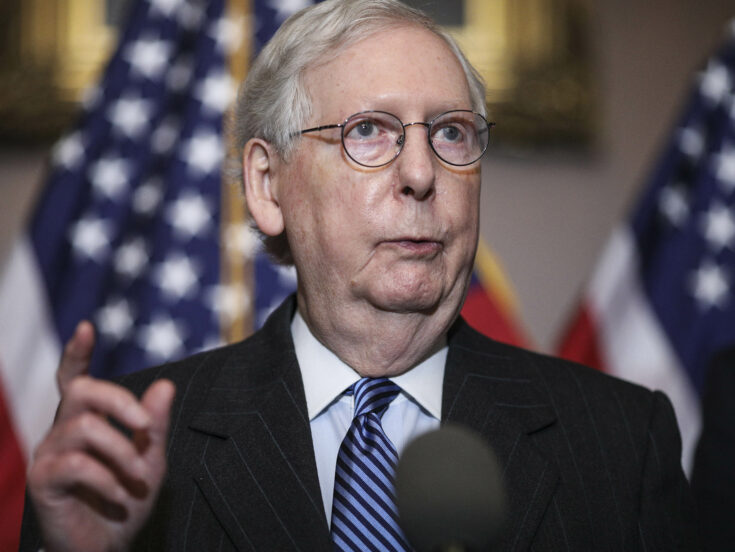 He said it was pretty much sufficient as it "struck a balance between broad support for all kinds of households and a lot more targeted relief for those who need help most."

Obviously, signing the relief package was not enough for Trump; he went on to push for an increase. "$600 is not enough," he wrote on Twitter.

He went even further, describing his own party members as "pathetic" for not increasing the payments.