The spooky temporary tattoo sticker turned out to be more permanent than expected. A woman sought help on social media when she failed to remove the unflattering tattoo.

The video soon reached more than a million views on TikTok.

British Elizabeth Rose, aged 46, bought the temporary face tattoos for herself and her granddaughter. They popped the stickers on for a bit of Halloween fun.

The temporary sticker covered the cheeks, forehead, and the area around the mouth. It was designed to have scary teeth and a couple of fake wounds.

"Put a tattoo sticker on, join in a bit of Halloween, you know? Put some on my granddaughter as well, she's seven, and my daughter rings up going 'has it come off?'" the grandmother said in the video.

"Well, it can't be that difficult, surely?"

Elizabeth then showed the viewers how firmly the sticker was stuck to her face by scrubbing it with a cotton pad. The facial tattoo did not come off in the slightest.

"F**k sake, I have meetings tomorrow," the stressed woman revealed.

When she asked Internet users for their advice it soon became clear she was not the only one having experienced these issues. 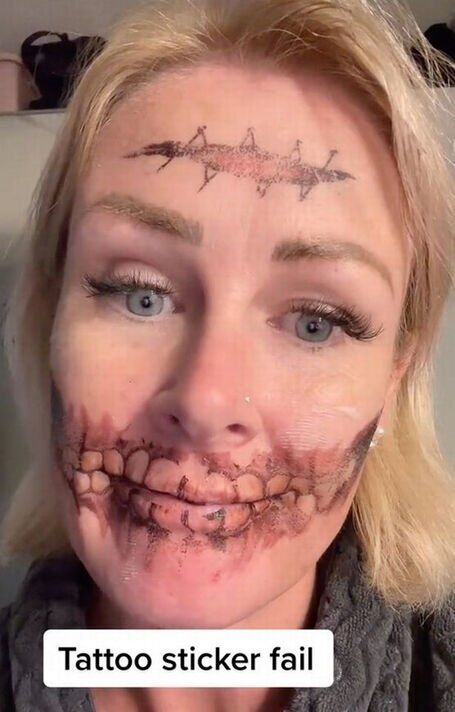 People suggested using oils or tape to get the sticker off.

"We made the same mistake. We Googled and found that oil took it off but by that point, we'd already scrubbed our faces red raw!" a TikTok user shared.

Others thought about the funny scenario of showing up with parts of a facial tattoo at work.

"The thought of you walking into the office like that has me rolling and I don't even know you!" a user joked.

Before going to bed, Elizabeth shared another video where her face was cleaned. She had managed to get the temporary tattoo removed by using a facial cleanser.

However, the struggle with the sticker left her face red.

"The only difference is I literally look like I've been slapped in the face ten times by Will Smith!" she jokingly said.

The meeting seems to have gone well, even if she described it as "colorful" because of her scrubbed face.

In a later video, the grandmother popped another sticker on her face and intended to try a variety of products including baby oil, vodka, and tape to remove it.

She tried parcel tape first and was shocked at how well it worked.

The tattoo stuck to the tape and was simply lifted off the skin. Elisabeth laughed at how easy it had been and that she did not need to try any of the other products.

"I might as well drink the vodka and be done with it," she joked.

So remember, if you are removing a temporary tattoo sticker, try parcel tape before you make the mistake of scrubbing your face red.